The first time I saw a snake eat itself, I was completely horrified and, at the same time, I was confused.

Why would a snake eat itself? Was it hungry? Had it gone crazy?

I would discover that what may have seemed like Ouroboros, or the mythical self-devouring snake, was, in fact, a result of environmental, heating, and stress factors.

Having had a few pet snakes, I wondered just exactly what would cause a snake to eat itself and how could I prevent this from happening to one of my slithering pets.

Why Do Snakes Eat Themselves?

Snakes eat themselves because of their own inability to thermoregulate efficiently or because they are stressed. This can happen in captivity where snakes don’t have the ability to move around and better regulate their body temperature and they have no release for their stress triggers.

Why Snakes Eat Themselves: Causes 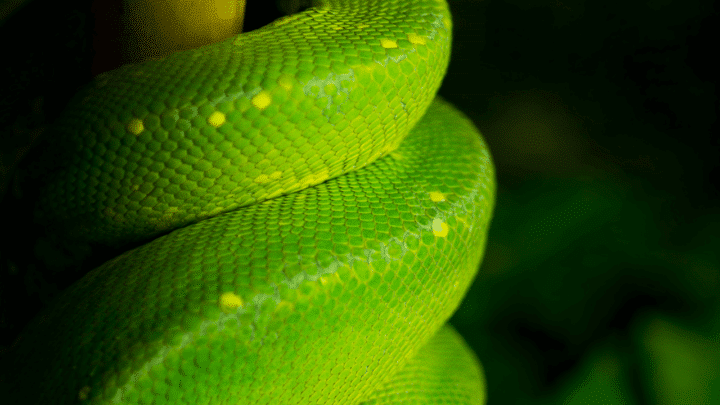 There are two main reasons snakes could begin to eat themselves, namely an inability to regulate their own body temperature, and thus they overheat, and when they are stressed.

My own investigations found these two factors can happen more often than the casual pet owner may suspect. 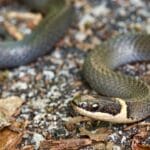 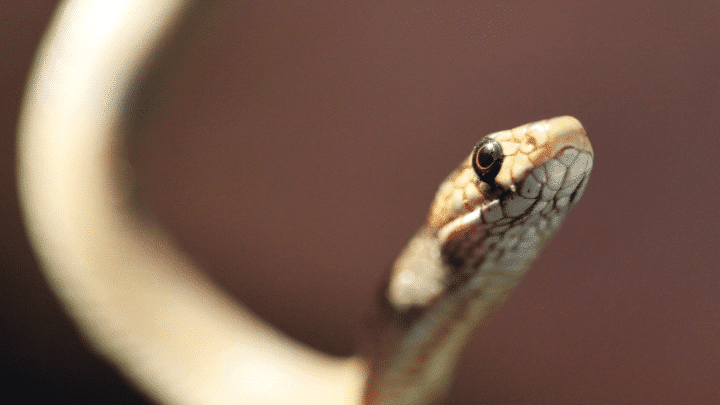 Snakes are not warmblooded like humans. They are coldblooded, which means they have to rely on the outside environment to heat up and cool down.

This is why snakes and other cold-blooded animals like geckos and lizards often sunbathe in the morning so they can raise their core temperature.

When the day turns hottest, cold-blooded animals have to find a shady spot where they can cool down as they can’t pant or sweat like a mammal does to lower their body temperature.

So a snake can easily overheat if it can’t find a shady spot.

In captivity, this can be a real problem for snakes as they may be in a tank that has no cooler area or their heating lamp may be too hot for them.

This can lead to the snake’s body temperature becoming the same as the tank or their outside environment.

This is a direct result of the snake being poikilothermic or having an inability to self-regulate temperature.

If your snake is getting too hot, it will begin to suffer confusion as its whole body system is reliant on being at a certain temperature.

Overheating causes their metabolism to experience a spike, and your snake may be tricked into believing it is hungry (even when it isn’t).

I’ve seen snakes out in the wild hunt and devour animals they would previously have left alone on extremely hot summer days. It’s even possible that snakes end up eating more than they should.

Remember, a snake has a slow metabolism, and once it has eaten a mouse or rabbit, it doesn’t need to hunt and eat more.

A snake that gorges itself often does so because it keeps believing it is hungry due to a hyper-metabolism reaction. 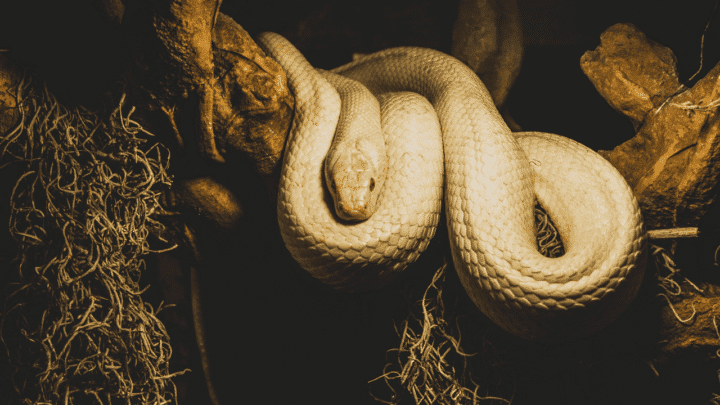 Snakes eat themselves because they are stressed

While humans can find a way to release stress, snakes are usually kept in tanks, and the confinement can cause them to become stressed.

Like humans have a response to stress by binge eating, snakes will have the same reaction.

This instinct to eat is survival-based. In the wild, the snake would go hunt, but in a tank or enclosure, the snake has nothing to hunt.

Soon, due to being overheated, the snake will not be able to distinguish its own body from the environmental temperature.

The snake won’t be able to identify that its tail is part of its body. Therefore, it will see a twitching tail as prey.

Confused, overheated, stressed, and with a fake sense of hunger, the snake will bite into its own tail, devouring itself.

This will usually not be a single bite either, and it’s very likely the snake will keep eating itself until its body heat can be regulated or it kills itself. 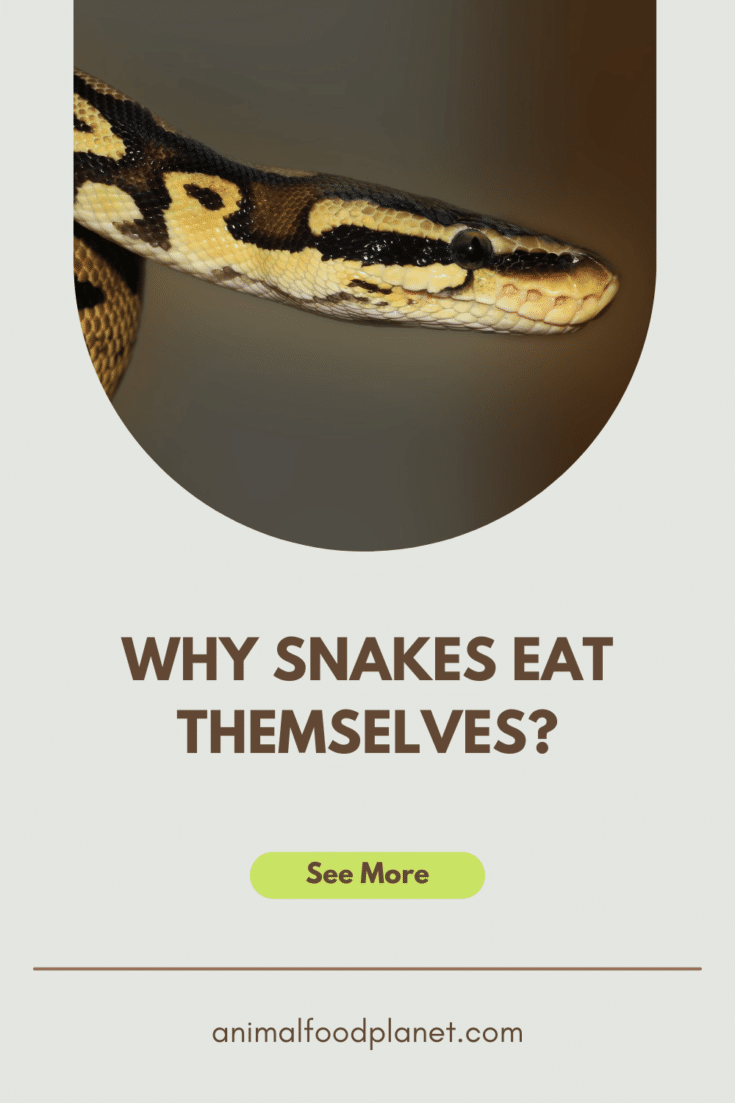 Why Snakes Eat Themselves

Keep in mind that your pet snake will have to be able to self-regulate its temperature by having a tank with a warm corner or a heating stone and other corners where the snake can cool down.

Ensure there is a small water bath to help cool your snake down.

Help Your Snake to Not Be Stressed

Snakes in captivity get stressed when they don’t have enough space, if they aren’t fed regularly, if they are ill, or if they are being exposed to disturbances like people tapping on the tank windows or constant lighting.

Ensure your snake isn’t stressed by using routines for watering, feeding, heating, and sleeping. Each breed of snake has its own food requirements, so be sure to feed appropriately.

I keep track of what I feed in a little notebook, which is also a handy place to write down when my snake has last seen the vet.

Snakes, like humans and other pets, also need to see the vet at least once a year or when you notice they have dropped weight or aren’t growing or eating.

If you spot signs of your snake being stressed, you will be able to take action to help them relax and be a happy snake.

This will help stop your snake from eating itself or engaging in other self-destructive behavior.

Frequently Asked Questions about Why Snakes Eat Themselves

What causes snakes to eat themselves?

Snakes can become confused by extreme heat and they may suffer false hunger pangs, causing them to eat the nearest moving thing—their own tail.

What happens if a snake eats its own tail?

Usually, if a snake begins to eat its own tail, it means death. They will suffer shock, an infection can set in, and if your snake eats enough of their tail, they will suffer blood loss too. Death becomes inevitable at that point.

Which snake is documented most as eating itself?

The North American Rat Snake is known to often eat itself. This may be because the species is more susceptible to heat and becomes stressed more often. Whatever the reason, there have been several recorded instances of these snakes eating themselves and often dying as a result.

Snakes make excellent pets, but if you don’t take good care of them and ensure their thermoregulation needs are met and that they don’t become stressed, they can fall victim to their own body’s frailties like hyper-metabolism and inability to handle the heat.

Death could result when they become confused and decide to bite into their own flesh.

[…] are many species of snakes classified under the umbrella term “garter snakes”, but the most popular species of pet […]