When it comes to snakes, people have varying opinions regarding these slithering reptiles.

While some people are fascinated with these creatures and may even own one as a pet, others run in the opposite direction at the sight of a snake.

Regardless of whether you are afraid of snakes or drawn to them, you may still be interested in knowing more about the behavior of snakes- even if your curiosity is based solely on your desire to protect yourself when you encounter a snake.

So, what’s the reason behind snakes sticking their tongues out? Is it because they’re hungry and want to take a bite out of your leg for dinner?

Or is there a less ominous explanation?

Why Do Snakes Stick Their Tongue Out?

Snakes stick their tongues out to smell their surroundings. While the snake may indeed pick up on your scent, this instinctual snake behavior is primarily used to seek out the company of a nearby mate, to search for prey, or to avoid predators. Their tongues supplement their sense of smell and compensate for their bad eyesight and hearing limitations.

A Snake’s Tongue Enhances its Capacity to Smell

When one of the five senses is limited, another sense often becomes enhanced. Many people who have poor vision subsequently have exceptional hearing.

The same phenomenon occurs in the animal population, and snakes are no exception. 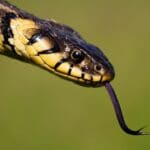 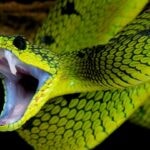 Snakes have extremely poor vision and difficulties hearing, which is the reason for their enhanced sense of smell.

Sure, a snake’s nostrils work just fine, but the tongue further accentuates a snake’s ability to pick up on nearby scents by operating as an antenna.

Without getting too scientific, snakes have an organ that is located on the roof of their mouth. This is called a Jacobson’s organ.

When a snake flicks its tongue, it picks up particles in the air and then sticks the prongs of its tongue into two holes that are inside the roof of its mouth where the Jacobson’s organ is located.

This results in a sensory message being sent through receptors to the snake’s brain which allows it to interpret the source of the smell.

Snakes Stick Out Their Tongues to Find a Mate

Since snakes have very poor vision, they can’t simply slither around a tree and spot a potential mate the way that a person would approach an attractive partner at a bar.

The only way that a snake can tell that there is another snake nearby is to pick up its scent.

While it is speculated that humans may also subconsciously pick up on the pheromones of potential partners, this instinctual capability is more prevalent in the animal population.

Reproduction is a natural instinct for the survival of all species. Snakes are no different, so when you see a snake flicking its tongue, it may not be searching for dinner after all.

It may be seeking out a potential mate.

Snakes Stick Out Their Tongues to Search for Prey

Just as a snake would pick up the pheromones produced by another snake, it will also be able to detect the scent of nearby prey.

A snake may not be able to see a mouse that’s a few feet away and may not even hear the scurrying of a mouse’s movements, but the snake is an expert at quietly approaching that mouse and swallowing it in a heartbeat.

The snake accomplishes this mission simply through its ability to smell nearby prey.

You may have even witnessed a snake slither a couple of feet in one direction before pausing and sticking out his tongue.

When a snake picks up on the scent of nearby prey or a potential mate, its tongue acts like a GPS locator that directs them to the location where the smell is coming from.

So, if you have an encounter with a snake and it sticks its tongue out, it may very well be hungry. However, you are an unlikely target for a snake’s next meal.

Most snakes feed on smaller animals such as field mice, but since you are much larger than a snake, the snake may identify you as being a potential predator.

Snakes Stick Out Their Tongues to Detect Potential Predators

Surprisingly, that snake that you are so afraid of may actually be terrified of you. Unless the snake is extremely large, chances are that it’s not lunging at you because it wants a meal.

On the contrary, it most likely has classified you as being a possible threat and is trying to defend itself.

While snakes are capable of wrapping their bodies around both predators and prey, they rarely respond in this manner when they encounter an adult human.

However, they may either bite or slither away in the opposite direction, depending on their particular species.

Snakes don’t have the capacity to defend themselves against every predator and may slither away from you at the same time as you’re running away from them.

In other cases, the snake may indeed lunge towards you and go in for the bite.

Although most snakes aren’t poisonous, that fear is often present when a person isn’t familiar with local snake species. However, you’ll want to avoid certain snake species such as rattlesnakes.

Frequently Asked Questions about Why Snakes Stick Their Tongue Out

Do Snake’s Tongues Have Venom?

Surprisingly, the answer is no. Snakes do not have venom on their tongues. The venom is present in their fangs and is only transferred to prey during an actual snake bite.

Why is the Tongue of a Snake Split into Two Parts?

It’s believed that the split of a snake’s tongues provides them with the ability to detect scents in multiple dimensions, which increases their capacity to pick up on the pheromones of mates and track down prey. The prongs of a snake’s tongue also fit perfectly into their Jacobson’s organ, which allows them to identify the source of the smell.

What Is a Snake’s Tongue Called?

A snake’s tongue is simply called a forked tongue and provides the snake with the capacity to identify the direction that the smell is coming from.

A snake’s tongue has little to do with hunger or aggression. When a snack flicks its tongue, it is just trying to identify the source and location of the surrounding scents.

Snakes do this to locate mates, track down prey, and detect potential threats. No, the snake isn’t necessarily preparing to attack.

On the contrary, it’s just smelling you to determine if you are a mate, a mouse, or a predator.

Why Do Snakes Eat Themselves? 2 Reasons

[…] Snakes are truly fascinating creatures that could make the perfect pet for the right human being. […]