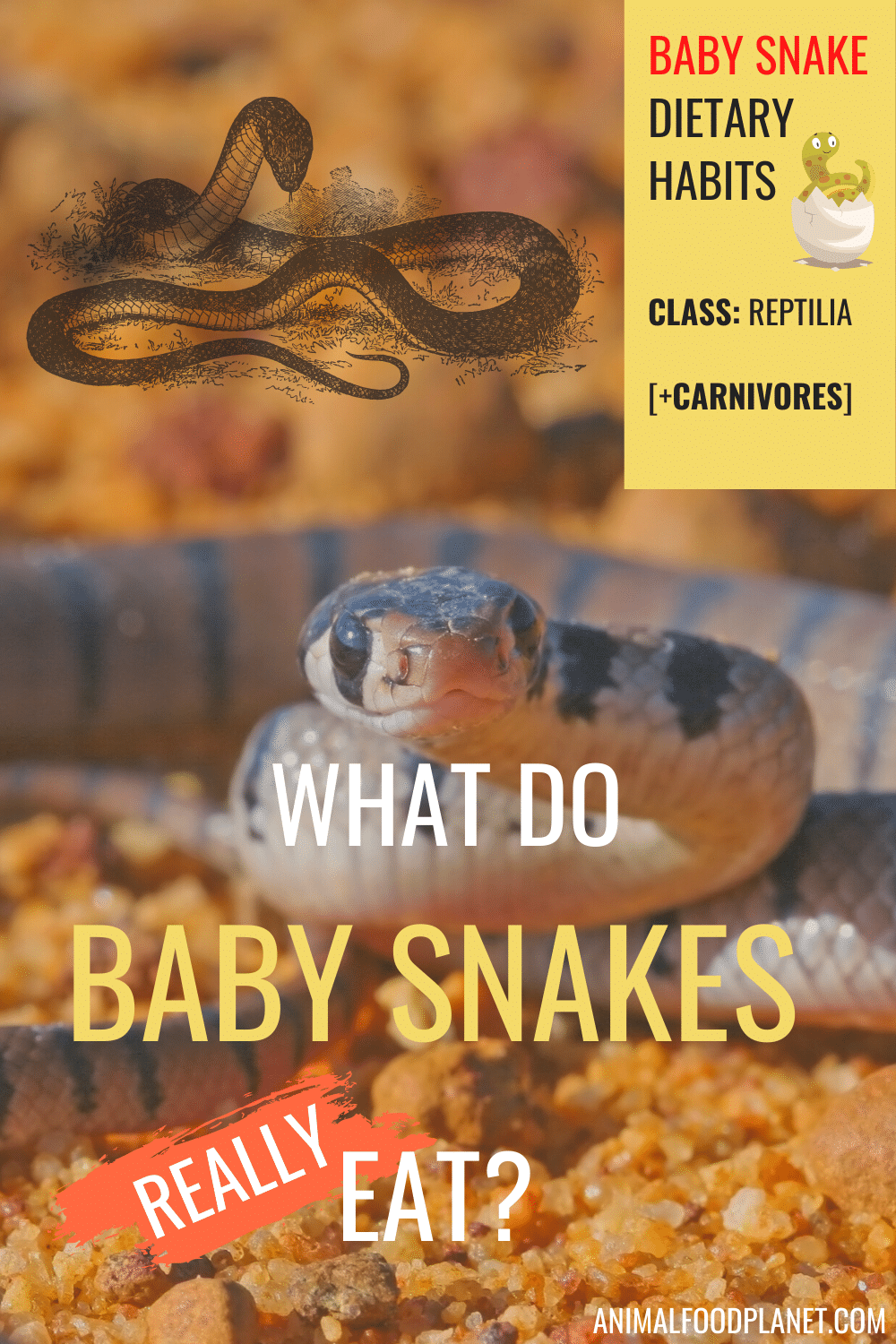 What do baby snakes eat?

Baby snakes often eat the same foods that their parents eat, though size is an important factor. All snakes are carnivores, which means there are no herbivore snakes. Baby snakes can eat small things such as insects, frogs, mice, eggs, and small animals they can fit in their mouths.

But first, here’s a quick explanation of how snakes eat.

How do baby snakes eat?

Though their chosen foods may be different, one thing all snakes have in common is how they eat.

Without paws or claws to help them tear food apart, snakes needed a way to eat. They evolved special jaws that can make room for swallowing everything whole.

With stretchy muscles, tendons, and ligaments, snakes can open their mouths extra wide. They also have two lower jaws that can move independently. This allows them to accommodate the largest prey, such as gazelles.

One python even managed to eat an Indonesian woman. Though it’s rare for snakes to eat humans, it just goes to show you how wide a snake can open its mouth.

They have impressive muscle control, too. Have you ever tried to swallow something too big? Imagine if you couldn’t cough it up or chew it smaller.

Snakes don’t have the luxury of chewing their food into mush. But they don’t have to. Their throat muscles do all the work pushing their meals all the way down into their bellies.

An interesting fact about snakes is that some are hunters that actively seek out and stalk their prey. Others are ambush predators who simply sit and wait for food to walk by.

How a snake finds its food is an important factor in what they eat, too.

What do wild baby snakes eat?

A wild snake’s habitat, size, health, and species all play a role in the food snakes prefer. It also depends on the health of their environment and the other animals in it.

Wild baby snakes usually eat what their parents eat. So, if an adult snake likes to eat rats, a baby snake might start out on baby rats or mice, which are much smaller than the adult versions.

Many snake species will only eat warm-blooded prey. That includes things like rats, moles, and birds.

Other snakes only eat cold-blooded things like insects, amphibians, other reptiles, or fish.

There are some species of snakes that will dig for earthworms, slugs, or pupae buried in soil. Others prefer to eat bird eggs or reptile eggs.

The largest wild snakes have been known to eat large rabbits, pigs, and whole deer!

Habitat of the snake

A baby snake’s habitat will dictate what foods are available to eat. In the case of desert snakes, for example, they may have more lizards and insects available than birds.

Arboreal snakes, on the other hand, will be more likely to eat birds or bird eggs, since they both live up in the trees.

Trying to feed a wild baby snake something that isn’t in their natural habitat won’t usually work. Snakes can be incredibly picky, and for good reason. What’s healthy for one snake species may be deadly to another!

Size of the food

Even though snakes can eat things much bigger than they are, there is still a limit to what they can manage. A good rule of thumb is that a snake can eat things about the width of the fattest part of their body.

Some snakes have been known to get themselves into trouble by eating something way too big. This slows them down and can cause internal damage.

Health of the prey

However, the biggest health issue for snakes is something called mouth rot, or infectious stomatitis. This is a severe inflammation of the mouth and throat that can be caused by injury (such as from a struggling wild mouse), stress, or a suppressed immune system. Left untreated, mouth rot can lead to death because the snake can no longer eat.

Here’s my favorite part. Let’s talk about some specific species and what these baby snakes eat.

The smallest snake is the Leptotyphlops carlae (also called threadsnake), which is small enough to fit on a U.S. quarter. It’s super thin, like a spaghetti noodle. This baby snake is so tiny, its main food source is insect larvae.

The biggest snake is the anaconda, which can get up to 30 feet long. Baby anacondas eat a wide variety of prey because they are so big to begin with. They eat birds, fish, small mammals, and caimans.

Garter snakes are found all over the world. Being one of the most common snakes, you’ve probably already seen a lot of them in your life. With several dozen species of garter snakes, all living in different areas, their babies eat a huge variety of things. Baby garter snakes eat small insects, small frogs, baby toads, baby mice, slugs, earthworms, and leeches.  They’re not picky!

The python is a popular pet snake, but in the wild, baby pythons eat things like baby monkeys, small birds, small rabbits, rats, mice, and other reptiles.

Rattlesnakes are often thought of as desert animals, but they’re not too picky about where they live. That means baby rattlesnakes have a large variety of food to choose from. Mice and rats, of course, as well as ground-dwelling birds, gophers, and lizards.

What do pet baby snakes eat?

A baby snake in the wild will eat whatever it has evolved to eat. But a pet baby snake will depend on humans to feed it. That severely limits a pet snake’s meal options.

Most pet snakes eat mice. They come in several sizes, but baby snakes are usually started out on “pinkie” mice. Those are newborn mice that haven’t opened their eyes or sprouted fur yet.

Some captive baby snakes are big enough to eat larger starter food. They may be fed pinkie rats instead of mice, for example. Owners may also choose to feed their large baby snakes small adult mice.

Baby snakes can sometimes handle small crickets. Mealworms are a safe choice, as are eggs. But be sure to check with your veterinarian before adding different foods to your baby snake’s diet.

A word of caution to would-be snake owners. Don’t feed your baby snake live mice or rats. Live mice and rats will fight back. That means injuries for your pet snake! This is one of the most common ways snakes contract mouth rot—we talked about that a little earlier.

Though mouth rot can be treated, it’s painful for your snake and expensive for you. To avoid it, choose safer and more humane methods of feeding your baby snake. Pet stores offer frozen mice in various sizes for this purpose.

With thousands of snake species in the world, it’s impossible to list what all those babies can eat. However, with the information I’ve provided here, you should be able to work it out for yourself with a specific species.

Size matters, but so does the amount of effort involved in eating the prey. So, a tiny baby snake, like a newly hatched threadsnake, will never eat something as big as a deer. While a baby anaconda isn’t likely to eat something as tiny as ant larvae because it’s not worth the effort.

I hope you’ve learned something new in this article. Mostly, I hope you’ve come to appreciate the wide variety of foods baby snakes can eat.

To attract snakes to your yard, make sure their food sources have places to hide and plenty to eat.

How often do snakes eat in the wild? Wild snakes eat once a week if food is available. Though some snakes only need to eat a few times per year to survive.

What do snakes eat? Snakes are carnivores. They eat mice, rats, rabbits, birds, and other reptiles. They can also eat insects and eggs.