As human beings, it can be incredibly difficult for us to understand why certain animals act the way they do, especially wild animals. It simply doesn’t seem to make sense.

However, countless animal scientists, researchers, and advocates put themselves into the field to get a first-hand look and a firm grasp on odd animal behavior.

If you’ve ever found yourself asking why do snakes bite themselves, you’re not alone.

Why do Snakes Bite Themselves?

Typically, snakes bite themselves because they are overheating, aggressive, overly stressed, hungry, or confusing their own tail for prey. Snakes may also bite themselves when their eyesight is impaired, such as when they are shedding. In a common case of mistaken identity, they might also believe their tail is that of another snake. 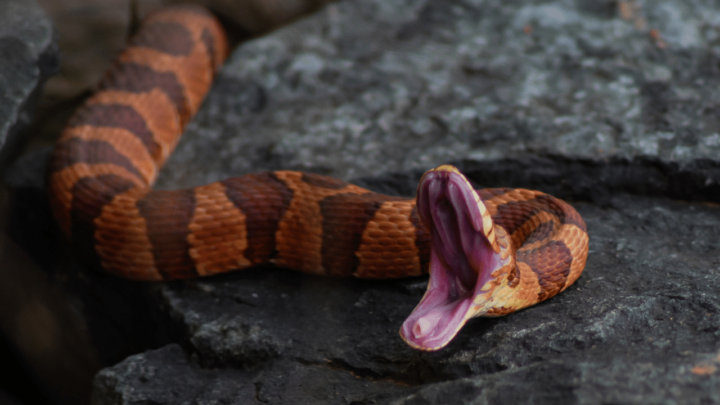 Why do Snakes Bite Themselves

Understanding Why Snakes Bite Themselves

When it comes to snakes biting themselves, we might find ourselves confused, even when we’ve been told the reasons that fuel this particular behavior.

Sometimes, animal actions may seem even more confusing when we know why. For example, a snake biting himself because he’s hot!

However, this behavior isn’t too typical, and there is much more to it than heat. 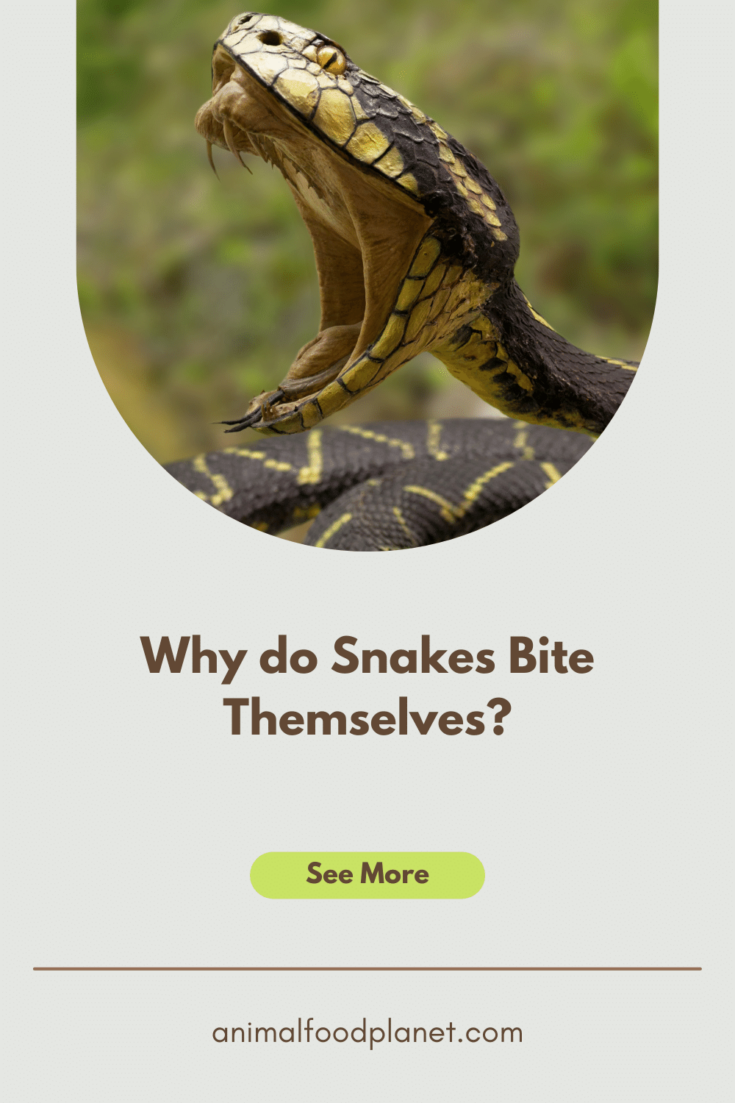 Why snakes bite themselves 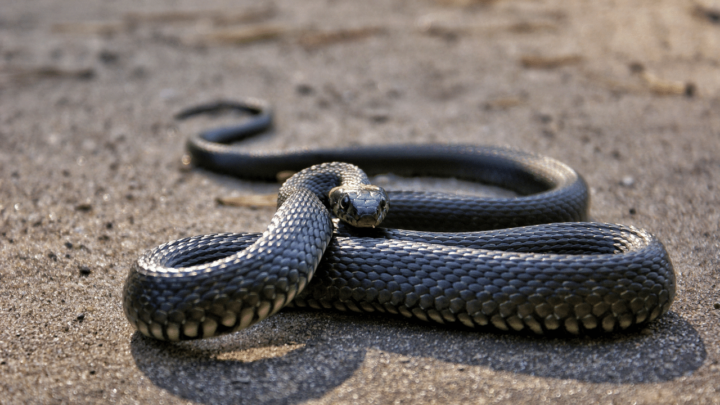 Stress in snakes can lead to biting

One of the biggest reasons that snakes bite themselves is stress.

I’ve seen this in pet snakes more than snakes in the wild, and much of it has to do with living conditions.

Snake ownership isn’t for the faint-hearted. Because snakes are easily stressed, they require certain living conditions and a habitat that specifically meets their needs.

Not attempting to meet the needs of your pet snake will quickly cause discomfort, leading him to bite (or even eat) his tail!

Temperature and humidity are major players in snake happiness.

Snakes living in temperatures that are much too hot (or too cold) will quickly become disoriented.

Biting and eating their tails are often a response to that stress and disorientation.

Captive snakes will typically find themselves unhappy when their terrarium is too small or too large.

They will struggle when owners provide an erratic feeding schedule, they are being handled too much, and the alterations between light and dark are insufficient.

If you have a snake for a pet, a good rule to follow is that a captive snake that you cannot see is a happy snake. 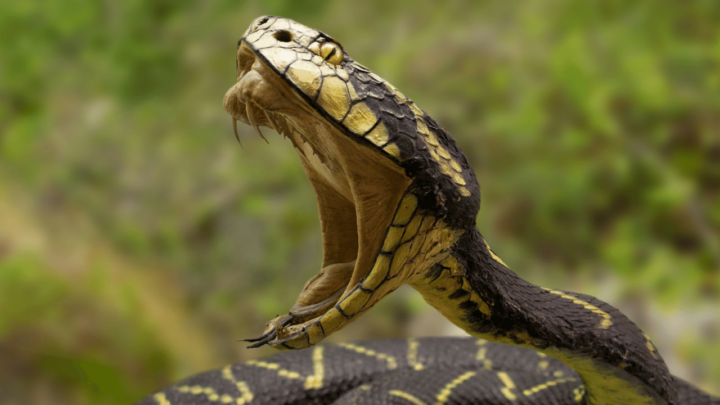 The excitement surrounding food may be another reason that your snake is biting himself.

This can look different for various snakes and situations, but it’s common for lack of food to lead to disorientation, causing your snake to bite at anything around it that moves.

Check-in with your vet because you’ll likely have to alter how you feed and how much.

In cases of extreme hunger, a snake might eat himself for nourishment. This usually happens in the wild, where a snake isn’t capable of hunting due to injury or poor health.

When snakes have a metabolism that’s running too fast, they may be unable to stop feeding.

For example, in the wild, a snake might eat an entire nest of mice or moles because they are unsure when they’ll eat again, and they’re acting on instinct. In some situations, this instinct could cause a snake to feed on itself.

Various snake breeds are cannibalistic, such as King Cobra’s, and they never hesitate to feed on other snakes.

If you own or witness a cannibalistic breed of snake eating or biting its tail, it could be a case of mistaken identity.

Of course, when it happens, you’ll likely see the snake recoil in defense from the bite! 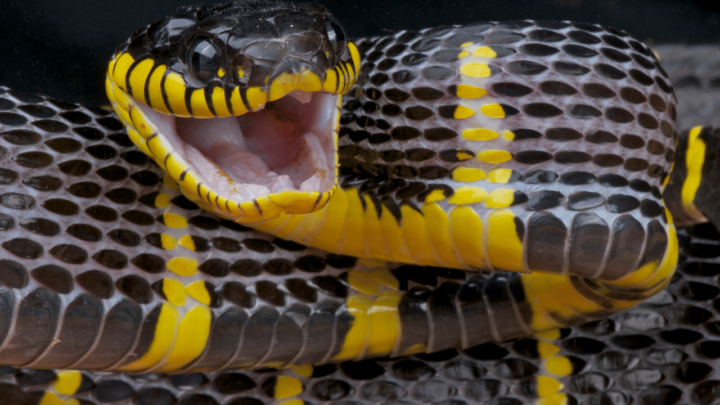 Some species of snake are more aggressive than others.

Snakes are asocial by nature, so if your snake is biting his own tail, he probably thinks it’s another snake in his territory.

If you notice this behavior, consider the size of your terrarium.

A snake that doesn’t have room to move or stretch out will often mistake its tail for the body of another snake. 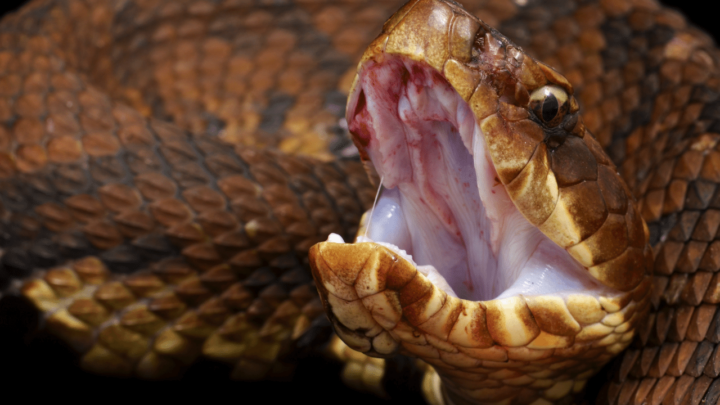 Snakes biting themselves can indicate a health problem

When snakes are approaching the end of their lives, they may begin to bite themselves.

Various reasons can cause this, ranging from possible neurological conditions to physical pain.

If you notice this behavior from your pet snake, take him to the vet right away.

If the snake is wild and biting itself, you’ll want to call in animal control and wildlife experts to handle the situation. Getting too close could result in a painful or poisonous snake bite.

Frequently Asked Questions about Why Snakes Bite Themselves

Why is my pet snake biting himself?

Your pet snake is probably biting himself because he’s ill, his feeding schedule is causing him distress, or his living conditions aren’t sufficient. Discuss the behavior with your vet, and be open and honest about how your snake is living.

Why do wild snakes eat themselves?

Any snake can attempt to eat itself, but with enough research, you’ll find that it usually happens in the wild. So often, snakes that eat themselves are suffering from extreme hunger and the inability to hunt.

What should I do if I find my snake biting himself?

Call your vet right away! Don’t try to stop your snake from biting at its own tail and body, as this will likely result in a painful snake bite for you.

While we might not always understand why our scaly friends behave the way they do, we must try to identify the cause and get them the help they need.

An unhappy snake is not a well snake, and it won’t take long for distress to cause a plethora of health issues.

If a snake is biting himself, something is wrong. As humans keep them as pets, it’s our job to try and fix it.

[…] While some people are fascinated with these creatures and may even own one as a pet, others run in the opposite direction at the sight of a snake. […]