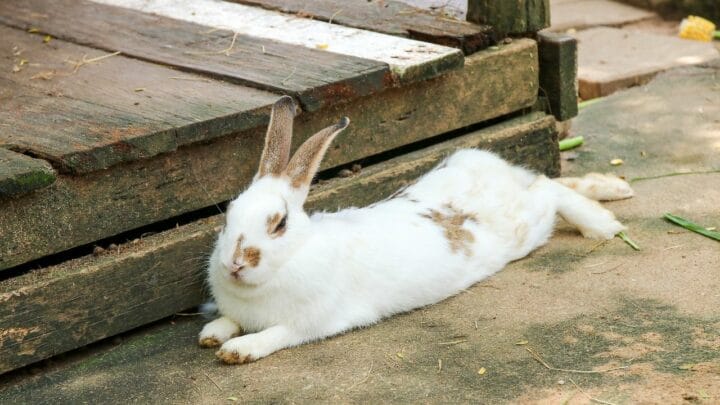 Most animals have certain behaviors that make us scratch our heads in bewilderment. Rabbits thumping their feet is one such behavior.

While some people may be the lucky owners of pet rabbits and want to be attuned to their pet’s behavior, so that they can better understand their rabbit’s needs and respond accordingly, other people may simply be curious.

Fortunately, this well-known rabbit behavior isn’t as mysterious as you may think, but the explanation may surprise you.

Many people may attribute this behavior to contentment, boredom, or fleas.

While these may be reasonable assumptions, the most common reason for rabbits to thump their feet is purely instinctual.

Why Do Rabbits Thump Their Feet?

Most often, a rabbit thumps its feet as a way of communicating possible danger to other rabbits that are nearby. With domesticated rabbits, this behavior is still commonly a response to fear. Rabbits may also thump due to stress or out of pure annoyance. In some interesting cases, rabbits thump in response to certain scents.

Wild rabbits typically reside in underground burrows, so when a rabbit ventures into the forest and encounters danger, their response is to thump their feet to notify the burrowing rabbits of the potential threat.

Even if the sound isn’t heard by rabbits nearby, the resulting ground vibrations caused by the thumping can still be felt. This is the true reason behind a rabbit’s tendency to thump its feet.

When speaking in reference to domesticated rabbits, this is a seemingly unlikely explanation unless you have more than one rabbit.

Even in that scenario, your pet rabbits probably don’t live underground. However, the instinct still remains after a rabbit has been domesticated.

If you think about it, domesticated dogs still bark and howl. So, why wouldn’t a domesticated rabbit still thump?

Although rabbits don’t bond with their human owners the same way that dogs do, over time they develop a level of comfort in their home environment and around their human companions.

Since it’s obvious to your pet rabbit that you feed and care for them, they may still thump their feet to communicate danger to you the same way as if you were a fellow rabbit.

Rabbits Thump When They Feel Afraid

Sure, your dog may bark to let you know that a stranger is knocking on the door, but you may still think that it sounds far-fetched that a rabbit would thump his foot to notify you of a possible threat.

It was once claimed that a rabbit’s thumping scared off a burglar. But did that rabbit thump to warn its owner of the danger in their home?

Or, did the rabbit thump simply because it felt afraid? It’s really hard to say.

While thumping was indeed a form of communication in a rabbit’s original habitat, it is known that rabbits will thump their feet if they are afraid. However, the level of their sensitivity varies.

Some rabbits will thump when a neighbor visits the home or in response to the smell of another animal or when exposed to a random scent that is unfamiliar.

Some will thump their feet at the sound of a car driving by, when you vacuum the floor, when the radio is playing, or when you mow the grass. Honestly, it all depends on the rabbit.

If you own a rabbit that thumps its feet a lot, then you may want to try to identify the source of their fear and eliminate it.

Although it’s ridiculous not to invite friends or neighbors over and certain sounds are unavoidable, you can try moving the cage to a quieter area of the house that visitors rarely enter.

If your rabbit thumps when you blast the radio, you may want to turn the volume down. Maybe you should temporarily move the cage when you vacuum or cut the grass.

Of course, you can’t completely alter your lifestyle to accommodate your rabbit, but minor changes may make a difference.

Rabbits Thump When They Feel Annoyed or Stressed

Of course, fear is classified as a stress response, but naturally, the vacuum cleaner isn’t going to harm the rabbit, and over time the rabbit may achieve this realization.

So, why do they continue to thump?

Although they may eventually recognize sounds and identify those sounds as unthreatening, the loud noise still startles them and triggers a stress response.

Or, maybe you realized that the sounds of the passing traffic were causing your pet rabbit to thump a lot, so you moved the cage to a quieter area. But they’re still thumping!

Initially, the change in surroundings may cause your rabbit to feel stressed, and they may continue to thump until they become comfortable and familiar with the new environment.

Rabbits may also thump throughout car rides to the veterinarian. This may be due to the sounds of passing traffic or their unfamiliarity with being in a car, or both.

When rabbits are sick or injured, frequent thumping may be a call for help, so a veterinary visit may be advisable- even if they don’t seem to enjoy the car ride.

Sometimes your rabbit may thump when they’re annoyed. For instance, you may be holding them and they are ready to go back to their cage.

Or, maybe your rabbit is hungry and wondering why you haven’t fed him yet.

Rabbits thump in an attempt to communicate. You just need to figure out what your rabbit is trying to tell you.

Thumping isn’t a sign of contentment or happiness. Rabbits thump when they’re attempting to communicate or are afraid.

Why does my rabbit thump at midnight?

If a rabbit isn’t comfortable in their environment, they may experience difficulty with settling down after dark. This is particularly common when a pet rabbit is initially brought into a new home, the cage is moved to another room, or if there are other pets in the home that make your rabbit feel unsafe.

Do rabbits thump for attention?

Not exactly. Thumping is a form of communication for rabbits, so they thump to let others know there’s a potential danger, which does result in them gaining attention.

While there’s a handful of reasons for rabbits thumping, most likely they are afraid or are trying to tell you something.

Sure, it may be annoying, but it’s just a rabbit’s way of communicating with you. 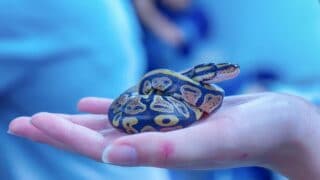 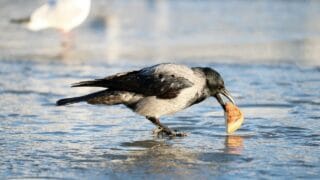 Next
What do Crows Eat in Winter - The Answer Is Here