How Do I Know If My Rabbit Is Dying? Oh No!

Rabbits live anywhere from 4 to 14 years. Hopefully, these are full years of you getting to know your rabbit well.

You need to know how he or she normally behaves in order to figure out whether he or she is sick – or dying.

Rabbits are prey animals and hide their symptoms of sickness or worse in order to not attract the attention of predators.

This is why it is important to get your rabbit to a vet as soon as he or she starts behaving in a peculiar way, notes The Rabbit Haven.

How Do I Know If My Rabbit Is Dying?

Rabbits may give off one or more signs of dying, which include loss of appetite, stopping all signs of grooming, hiding, changes in breathing, vocalizations including screaming, changes in body temperature, capillary refill rate, pooping behaviors, going into spasms, and slipping into a coma.

First Signs Your Rabbit May Be Dying

One of the first signs of a dying rabbit is hiding or at least trying to get as far away from other rabbits as possible.

In the wild, this instinct to hide when not feeling well helps the rabbit stay hidden from predators long enough to recover.

Another sign is that the rabbit loses all interest in food. Even the most favorite treats cannot tempt the bunny’s appetite.

If the rabbit is still eating even a little bit, is an overall good sign.

If the rabbit is dying quickly, he or she usually collapses. Collapsing could also mean that the rabbit’s in a state of shock.

Shock can kill your rabbit, so treat this as a medical emergency.

Signs Your Rabbit Is In Shock

If your rabbit is in shock, there still may be time to save him or her with a trip to the vet.

Common causes of shock include chewing on electrical wires, eating a poisonous plant, being teased or attacked by another animal, heat exhaustion, or illness.

Signs of shock include total collapse as if in a coma, rapid breathing, cold ears because the body temperature is going down, and a weak or thready pulse.

If you notice any of these signs, wrap the rabbit in a towel and place it in a box with a hot water bottle or heating pad. It’s crucial to warm the bunny up again.

See if you can trace what led to the rabbit’s state of shock. Get the rabbit to the vet.

Rabbits like to keep themselves clean. When a rabbit stops grooming himself or herself, this may be a sign of impending death.

The fur will look dirty or scruffy.

Rabbits also can drool heavily when they are dying.

Never try to bathe your rabbit as this could put the rabbit into shock. Gently wipe the drool with a dry towel if it will not stress the rabbit out too much.

The rabbit may also become incontinent and make no effort to move away from the mess. Although this makes the fur very dirty, resist giving the bunny a bath.

Dying rabbits may become unusually still or start twitching uncontrollably. Bunnies may even go into spasms.

They may open their mouths or start grinding their teeth. Their heads may even tilt oddly to one side. They may shiver even on a hot day.

The key here is that the rabbit is doing something very unusual for that bunny.

When rabbits are about to die, they usually empty their bowels. If the bunny has not eaten in days, the feces may come out watery.

Check the litter box or cage bottom to see if there is any diarrhea or a complete lack of poop.

Other Signs of a Dying Rabbit

Rabbits in pain tend to cry out or even scream. Some rabbits squeak or groan.

Some will wheeze or snuffle because they are having problems breathing. Some will grind their teeth constantly.

Some dying rabbits are silent.

Dying bunnies may become limp and not react to anything, even loud noises.

Sometimes they seem to flatten out or shrink as their breaths become shallower. Some will eventually slip into a coma.

Dying bunnies and bunnies in shock will have a low capillary refill rate.

Press your finger against your bunny’s gum. This leaves a white spot.

In healthy bunnies, this white spot turns back to pink in less than a second. In dying or very sick bunnies, this takes much longer.

If you can, take your rabbit’s temperature. A dying bunny could have too high or too low a temperature.

Their breathing and pulse rates will also be different. The normal pulse rate is 150 to 300 beats per minute.

Healthy bunnies breathe 32 to 65 times a minute. Dying bunnies may gasp or take a very long time between breaths.

Can Rabbits Die of Fright?

Rabbits can die of fright. Something like a dog teasing the outside of the rabbit’s cage can give the rabbit a heart attack or put the rabbit into shock. Avoid any sudden changes in the rabbit’s routine to avoid severe fright.

How Do I Comfort My Dying Rabbit?

Keep your bunny’s area quiet. Keep the temperature at a comfortable level. Wrap the bunny in a towel and cuddle, talking quietly. If your bunny is prescribed pain medication, keep on giving the medication, if possible.

Should I Try to Force Feed a Dying Rabbit?

It’s good to make sure your rabbit can get food or water if he or she wants it. Offer some water with an eyedropper, but do not try to force the bunny to drink or eat because he or she could choke. You want to make this time as stress-free as possible as your rabbit passes away.


The Least You Need to Know About Rabbits Dying

Rabbits can die suddenly, but often they will give signs that they are dying.

These signs include changes in eating, movement, grooming, breathing, and pooping.

Any great change in your rabbit’s normal behavior warrants a trip to the vet. 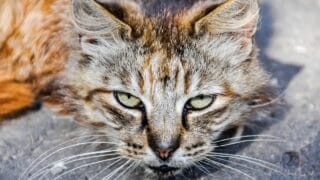 Previous
How To Know If My Cat Is Dying? Help! 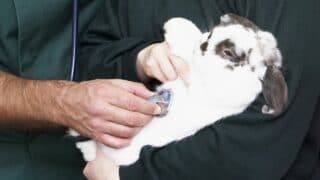 Next
How to Save a Bunny from Dying? See These Steps!

How Smart Are Rabbits? Hmmm...

[…] an animal lover, I have owned a few rabbits and other domestic pets and personally found their level of intelligence to be […]