While there are probably few things as cute as a newborn rabbit, knowing the length of your pet rabbit’s pregnancy can help you prepare and plan your rabbit management strategies.

I didn’t have a very good experience when I took care of rabbits the first time. I didn’t even notice my doe (or female rabbit) was pregnant until the little furballs were in the enclosure the next morning.

For How Long Are Rabbits Pregnant?

Essentially, the rabbit does have a gestational period of 28-35 days. This number is somewhat a variable, depending on your rabbit’s species. Some species, like the common tapeti, are pregnant for as many as 45 days, while the brush rabbit is only pregnant for 27 days.

How Long Are Rabbit Does Pregnant For: The Answer

While the ball-park figure is 28 to 35 days, each species of a rabbit has its own pregnancy length.

What is of concern to me as a rabbit owner is the fact that rabbit does are fertile almost as soon as they have had their litter during the kindling or birthing process.

Within 24 hours, the buck can impregnate the doe again, so breeding can be an ongoing process if you aren’t careful. 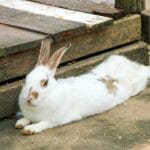 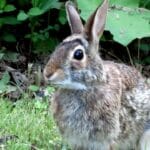 When Can Rabbits Get Pregnant

They can continue having babies, or kittens, or kits (which are the correct terms for baby rabbits) up till the age of four years.

I quickly learned I had to keep my young rabbit bucks (male rabbits) and does (female rabbits) separated unless I wanted a sudden population boom on my hands.

You should have your young rabbits assessed within two to three weeks to ensure you can separate the boys and girls as rabbits are prolific breeders.

Having two enclosures is a good way to do this.

What You Should Know About Rabbit Pregnancies

Many people love having new baby rabbits or kits about, and if you have a particularly sought-after rabbit pet, you may be tempted to become a breeder as these kittens are in high demand.

However, I soon discovered some information that I believe all rabbit owners should keep in mind.

While the doe can naturally fall pregnant almost immediately, you should wait at least a month after kindling before letting her breed again.

This is because the doe will suffer severe energy loss due to lactating and feeding her kits while simultaneously taking care of the unborn rabbits she has been carrying during gestation.

If you don’t take care of your doe, excessive breeding can shorten her life and also lead to infertility down the line.

Monitor Your Rabbit Does For Pregnancy Signs

It’s not like your rabbit does will wear a sign or change color when they are pregnant. They don’t advertise it.

You need to check on them regularly, weighing them weekly to check for weight gain, and feeling their stomachs often for signs that she’s carrying unborn kittens.

A sudden increased appetite and burrowing instinct kicking in can also be signs your doe is pregnant or nearing kindling.

Be sure to feed your doe enough during this time, and start keeping the bucks away to prevent a follow-up pregnancy as soon as she gives birth to the kits.

What Happens During Kindling

For the most part, your doe isn’t going to call you and tell you she’s going into labor.

Rabbits are instinctively equipped to deal with their labor on their own, and within a short 15 minutes, the whole process is usually over and done.

If you do notice your doe has a problem and she has most of the kits in the litter, but she seems ill or in pain, it’s a good idea to have a vet check her out for any pregnancy abnormalities.

She may have a stillborn kitten that hasn’t cleared the birthing channel, which can cause her to die if it’s not removed.

When Your Doe Doesn’t Give Birth

Okay, so I had one doe who showed all the signs of being pregnant after I had bred her with a stunning young buck I had. The doe began to eat more, and she gained weight.

She burrowed, lined the nest with her fur, and she became quite aggressive and difficult to handle.

However, after we crossed her due date, I waited a few more days, but still no kits to be seen. What now?

A sonar at the vets showed she had experienced a phantom pregnancy, and she needed hormone treatment to help regulate her cycles.

During the next mating, she was able to conceive, but if I had left her in that phantom pregnancy state, it would have been detrimental to her health.

Knowing the length of which her pregnancy should have been helped me plan and monitor her health and save her from a potentially fatal situation.

What to Do if You Don’t Want A Pregnant Doe

Rabbits, just like dogs or cats, can be spayed and neutered. Your local vet can perform the procedure, ensuring your doe can’t have kits and the buck can’t impregnate the does.

You can choose to only neuter the bucks, which will ensure the does are free from pregnancies in the future, but it’s probably best to have both does and bucks done.

This is also better for a doe than letting her become infertile by not breeding her.

Frequently Asked Questions about How Long Are Rabbits Pregnant

What months do rabbits have babies?

In Europe and North America, rabbit does give birth from mid-February to September as these are the spring to summer months. Their fertility naturally drops during winter as the strain of nursing kittens and having unborn kits gestating would be too much during the colder months when food is scarce.

How many kits can rabbit does have in a year?

Being a responsible bunny owner means you need to check for signs of pregnancy in your does and keep your does and bucks separated.

I advise keeping track of the dates you let the does and bucks mate so you can calculate the gestation period and know when to prepare for pregnancies.

This way, seeing new kits in the enclosure won’t be a huge surprise.