A dog’s bark can tell a lot of things. It can be a signal of danger ahead or a cry for help. Or it might be that your dog is communicating what he feels to you.

But what does it mean when your canine pal barks at nothing?

Different cultures have assigned various explanations for this. Some say that this could mean that the dog sees a ghost. While others think that this could be an omen of death.

In this article, we will discuss possible reasons and some ways you can do to address them.

Why do dogs sometimes bark at nothing?

There are various reasons why your dog barks at nothing. For starters, he may be sensing stimuli from a distance that are not apparent to us. Barking at nothing can also signal that your dog needs something, probably your attention, care, and time. This peculiar behavior can also mean they’re bored or they’re simply marking their territory. However, dogs can also bark at nothing if they’re afraid of something or as a form of greeting to a canine passing by.

Dogs are gifted with a sensory power far greater than ours. In fact, they can detect frequencies up to four times greater than that of their hoomans.

Canines can hear frequencies that are not detectable to a human ear. Aside from their keen ears, they also have a superb sense of smell.

Their noses have many more receptors than we have, making them capable of detecting more smells and scents than we do. 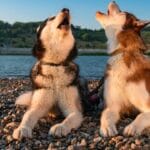 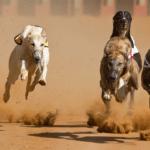 Now, what do these all up to?

It means that dogs are more sensitive to stimuli that may not be apparent to us. And it’s probably why they’re barking at nothing, at least, for their hoomans.

Check the direction of where your dog is barking. If it’s at a wall, it might mean that mice or other creatures are roaming or nesting in your house.

It might also be that the smell or sound is not coming from your home. Perhaps your pet is barking because he is getting a whiff of that freshly baked chicken a few houses away from yours.

Your pet is barking probably because he wants more of your attention or that he wants you to do something for him.

Take note of where he’s looking. If he looks you in the eye, then it’s your cue to spend more time with your dog.

Sometimes dogs do things just because they are bored. This is more common in pups who are just trying to release excess energy.

If this is the case, be sure to play with your pet to spend his energy.

Mental stimulation is also another way to spend your dog’s energy. If you plan to go out for a long time, you may want to leave him with puzzle foods.

This way, he’ll be able to relieve stress and pent-up frustration while you’re away.

Barking is one of the ways dogs soothe themselves. Barking at nothing because of fear is more common in pups than in adult dogs.

Your puppy will bark at a high pitch that may come with whining because he is scared.

Check out for the body language too. Other signs you should look out for are tucked tail, walking in circles, and a rigid body.

These actions signal that your dog may be experiencing separation anxiety or any phobia.

In this case, try to soothe your dog or your pup as much as you can. Speak softly and try to massage him until he calms down.

Dogs are social creatures. They may seem to bark at nothing when in reality, they are sensing another canine from a distance.

And this is their way of greeting them, a way of saying, “Hi, I’m here. Come by if you need a playmate”.

Your canine companion may tend to be territorial. This is probably the case when he hears someone near the door.

It is his way of warning them to stay away. The bark may also be directed to animals that we may not easily see, like critters or insects.

This is likely the case if the bark is loud and authoritative in tone.

How to address canine barking

While barking is a natural behavior among dogs. It can be irritating if it’s too much, not to mention distracting.

When this happens, identify the cause of the behavior. From there, you can proceed with different interventions.

Do not yell at him to shut up. Your doggo might only interpret this as an approval or encouragement on your part. If you do that, he is likely to repeat the behavior.

A bored dog is likely to bark out of nowhere. To address this, you might want to go on a walk with your dog.

You can also train him to respond to the ‘quiet’ command. This is especially useful when there are guests around.

Training might be more tedious, but the results are usually long-lasting. Just remember to pack treats and time the reward properly.

Give treats once he stops barking; this way, he’ll know that not barking is a favorable behavior. If it becomes too much for you, of course, you can also enlist the help of professionals to train your dog.

You can also take advantage of white noise. When everyone in the house is sleeping, that’s when your dog is hypervigilant to any sounds.

You can help prevent unnecessary barking by drowning out other sounds with white noise. You may turn the fan on a low setting to cover faint noises in his environment.

A dog’s bark can tell a lot of things. If he seems to bark at nothing, it’s important to relax and not jump to conclude that your dog is seeing a ghost.

He is doing this because he wants to convey something.

Before getting annoyed, try to understand where the behavior is coming from. From there, work with your dog to address it.

Why do dogs nudge with their nose?