Has he spotted a raccoon?

Like many pet owners, your first instinct is likely to be to check on your beloved dog.

When you check on him, however, you discover that he is not only absolutely fine but also blissfully asleep.

If your pet friend’s whimpering, barking, or howling while sleeping has terrified the living crap out of you, don’t fret because you are not the only one.

Such startling vocalizations stun a lot of dog owners.

So, if you want to get to the bottom of this perplexing situation, better keep reading.

Why Does My Dog Howl In His Sleep?

Your dog is far more likely not ill, in distress, or suffering while sleeping; he’s most likely having a horrible dream. Dogs howl while sleeping because they are dreaming. Howling in the night is often a clue that your dog is having a bad dream. 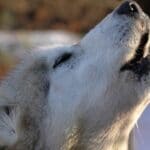 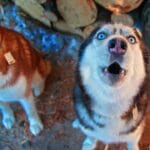 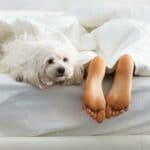 Reasons why my dog howls while asleep

A dog howls in his sleep for about the same reason he does anything else while sleeping – he’s dreaming.

Unknown to most fur parents, there are various triggers that can make our canine buddies start howling in the middle of their sleep.

It can be that they hear one of their doggy pals howling. It’s also possible there are ambient sounds in the environment, like the siren of an incoming firetruck, tornado warning systems, or even car alarms, that can make your dog yowl while asleep.

However, if your dog is frequently howling or experiencing nightmares, it’s worth thinking about.

Is it possible that something is giving your dog bad dreams?

If your dog is in a strange environment or does not feel secure when sleeping, he may become disturbed and suffer nightmares.

When a dog is unwell, on a new medicine, or undergoing medical treatment, he may have an upsurge in negative dreams, which will hopefully subside once he is healthy again.

Howling is intended to be a social appeal

When canines need to locate other members of their group, they howl.

This is the reason behind wolves’ howling. They are calling out to each other in order to locate one another.

There’s no reason for your dog to howl if he or she isn’t among other dogs.

Similarly, if your dog isn’t separated from his pack on a regular basis, he won’t howl.

But, if you separate your doggo from its canine best friend, it may start yowling.

On a lighter note, your pup can also do the same if you start howling as well.

What to do when my dog howls while asleep

If your canine howls in its sleep, just wake him up.

It’s possible that your pup is howling in its slumber because of a terrible nightmare it’s having.

It can really happen from time to time, and then you will notice your dog whining, weeping, barking, and howling.

Gently rousing your dog will usually help. There’s no need to wake him up all the way.

Simply nudge him until he stops howling, and he’ll be on his way to more pleasurable dreams.

Of course, a dog has no choice over whether or not he howls in his sleep.

Also, you can’t teach your pup what to dream. You, and even your doggy pal, have little control over what he will or will not dream about.

As a result, disciplinary measures such as scolding are ineffective in this situation.

It’s more likely that he’ll require positive reinforcement, such as creating a den for him to sleep in if he feels more comfortable there.

Things that dogs may do while asleep

In their sleep, dogs, cats, and a variety of other animal dreams.

While we don’t always know what these creatures dream about, we can make educated guesses.

Dogs will perform the following while sleeping:

When your dog is running or walking, his feet and legs will appear to be moving back and forth.

This is fairly frequent – your dog may dream of chasing bunnies! Also, your pup may be dreaming about other dogs chasing him in the dog park he visited earlier.

This could occur if your dog is trying to wake you up while dreaming.

Barking could suggest that your dog is experiencing a bad dream, or it could simply mean that he is excited.

This occurs because your dog is attempting to communicate in his dream, similar to barking and whining.

It’s comparable to someone “talking in their sleep,” and it’s likely that your dog is completely unaware of what he’s doing.

It’s extremely likely that your dog is suffering a nightmare when he whimpers in his sleep.

He could possibly be suffering from pain, such as arthritis, that you are unaware of.

It’s a good idea to wake him up now so he may return to his happy dreams.

When dogs scratch while asleep, it’s more of a reflexive movement.

When your canine pal starts to feel something itchy, it’ll start scratching that particular area, even with its eyes closed.

This is more likely to be how they react to their immediate environment rather than coming from a dream.

It’s time to check for skin irritation or fleas if your dog is itching a lot.

It’s possible they’re reminiscing about a time when they snatched a roast from the dinner table.

Or, it may be they’re recalling a vet visit. It’s possible that they are witnessing something that never happened.

It can also be because your doggo remembers a time when he howled, or that his dream entails some howling element.

He could be howling to sounds he’s heard before!

Thus, there’s absolutely nothing that you should be concerned about. It’s entirely natural for a dog to do anything while they’re sleeping.