If you’re a cat owner, hearing strange noises in the middle of the night would be nothing new for you.

Have you ever wondered and pondered why your cat makes such noises and that, too, in the night?

Here’s why cats yowl or meow randomly during the night.

Why Do Cats Make Weird Noises at Night?

Cats make weird noises at night because of their crepuscular nature (being active at dawn and dusk), hunger, thirst, stress, being in the heat, or possibly Cognitive Dysfunction Syndrome (CDS). This is quite normal, and there is nothing to worry about unless the meowing gets abnormal. 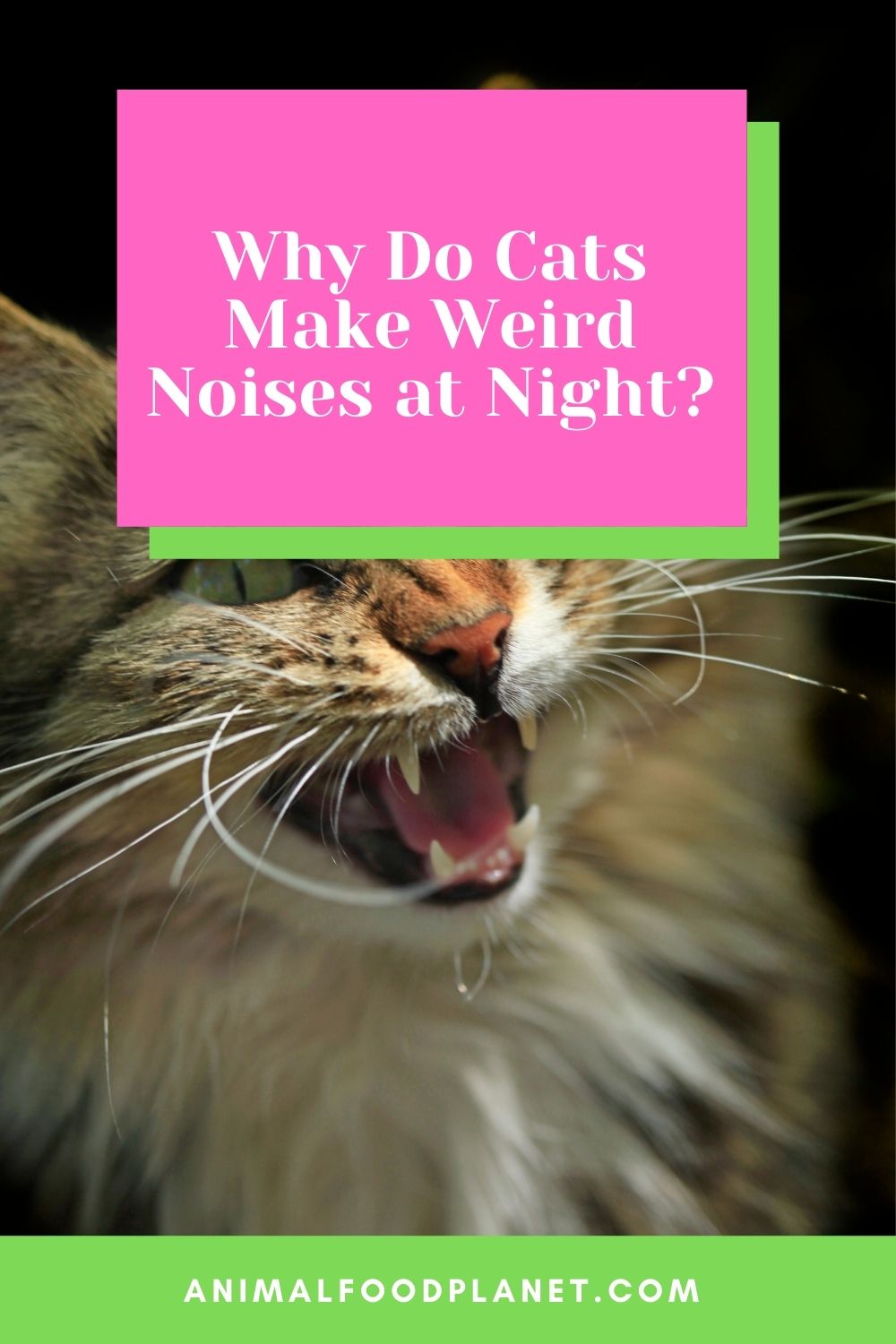 Cats, being crepuscular, are most active at dawn and dusk. Cats being nocturnal is an incredibly common misconception. 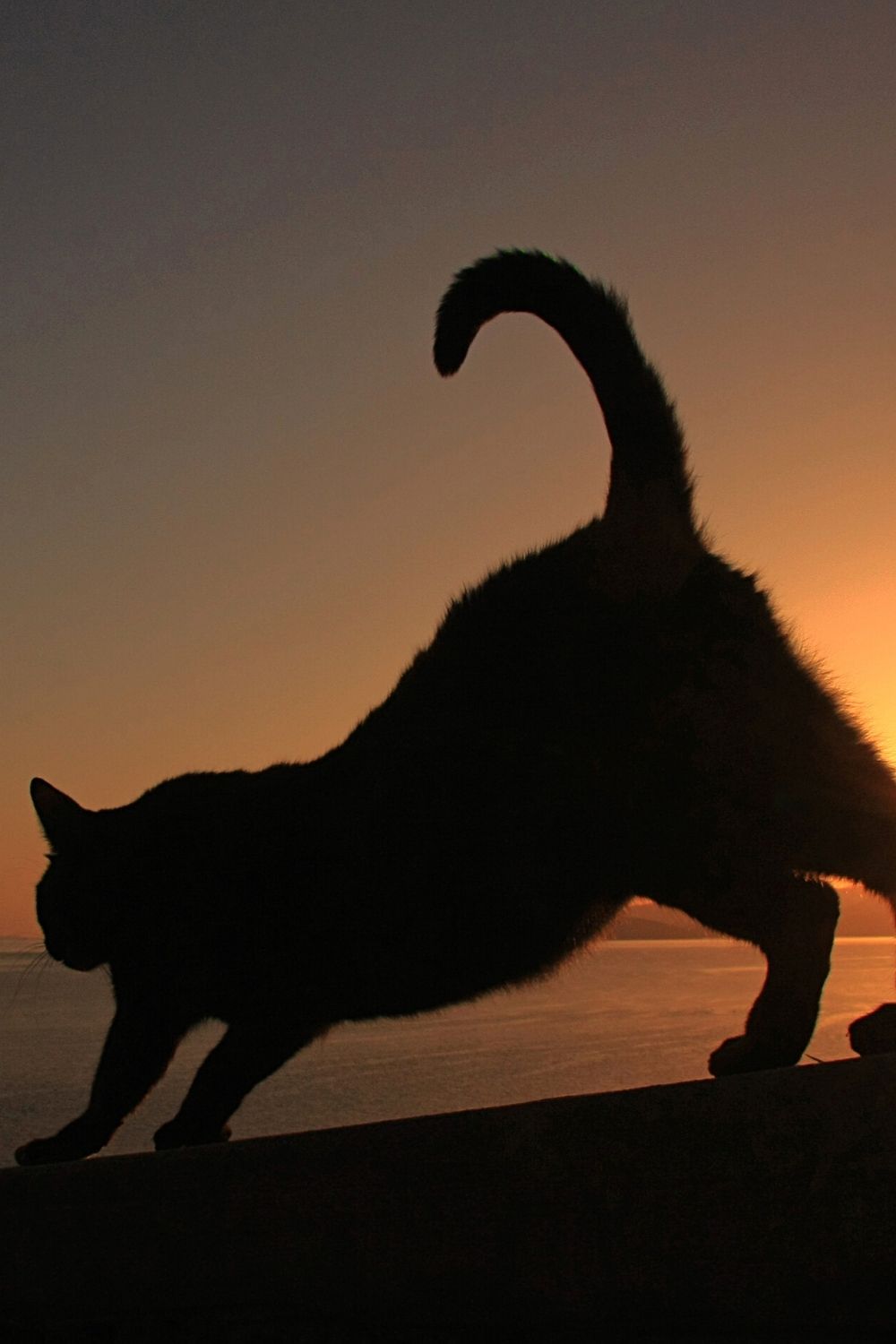 No, they are not nocturnal and are not equally active throughout the night.

Because of their crepuscular nature, they get hyperactive at certain times. In the past, before cats were domesticated, they used to be most active during specific times.

That is why they get alert when the darkness is just enough to give their eyes a competitive advantage.

This behavior, which helped them hunt prey, has been instilled in them. Even after years of domestication, this hasn’t gone and is there to stay.

Even though it may look like the cat is waking you up in “the middle of the night,” actually it is not. One look at the clock will tell you otherwise.

Unless some thought has been given to the feeding times of cats, they will ask for it every now and then.

If cats haven’t been trained to ask for food at specific times, which isn’t hard, they will ask for food during the night. 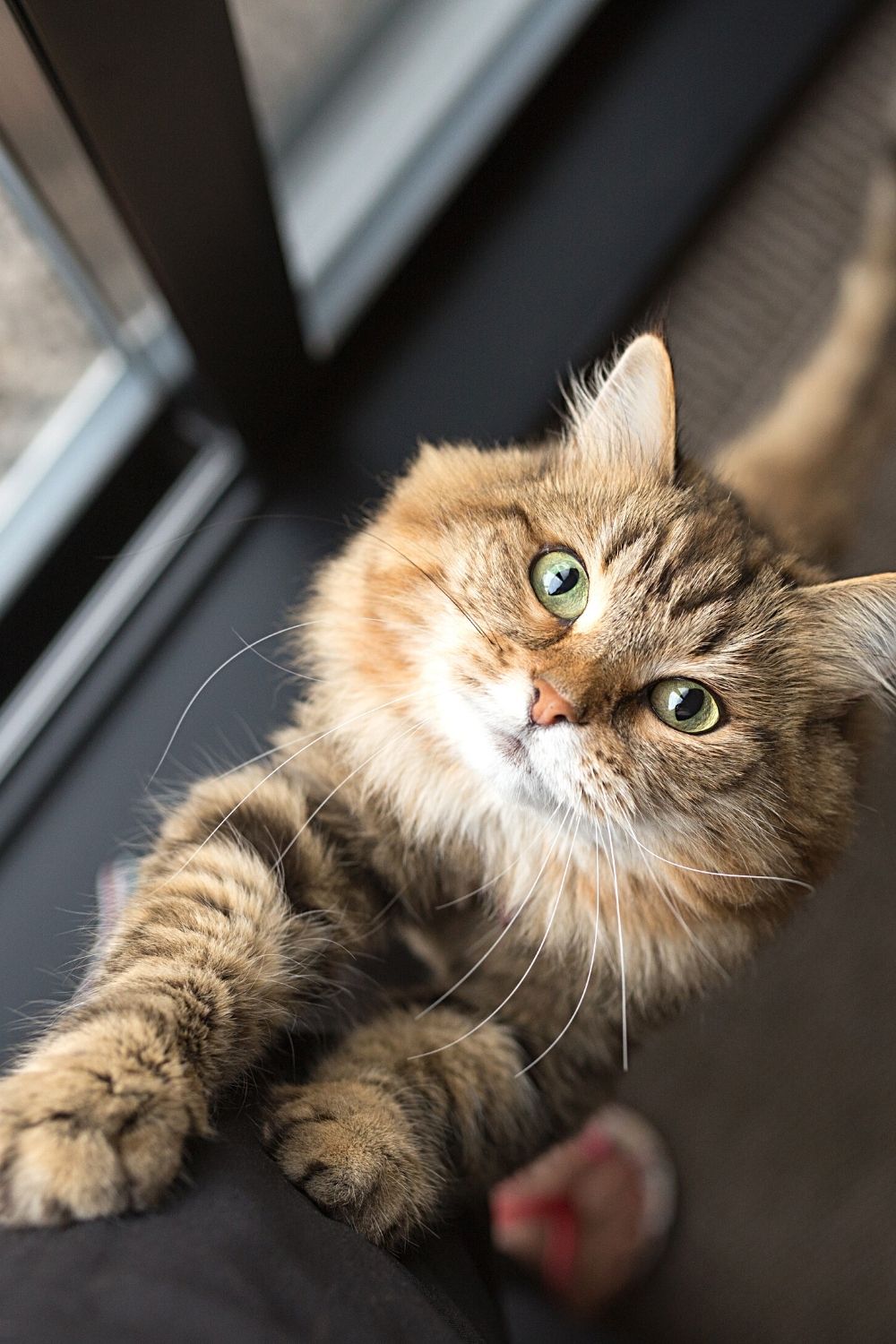 When a cat’s hungry or thirsty before bedtime, it will make noises to ask for food even if it’s night

Cats are quite active, and all the roaming around can make them hungry pretty quickly. If a strict feeding schedule hasn’t been made, there is a short work-around.

If I feed my cat just before I sleep, there’s a high chance it won’t ask for food at night.

However, I recommend making a strict schedule and sticking to it. This is much better for the cat than just randomly feeding it.

Unlike stray cats, domesticated cats are pretty prone to stress, and a stressed cat certainly makes more weird noises than a normal one. 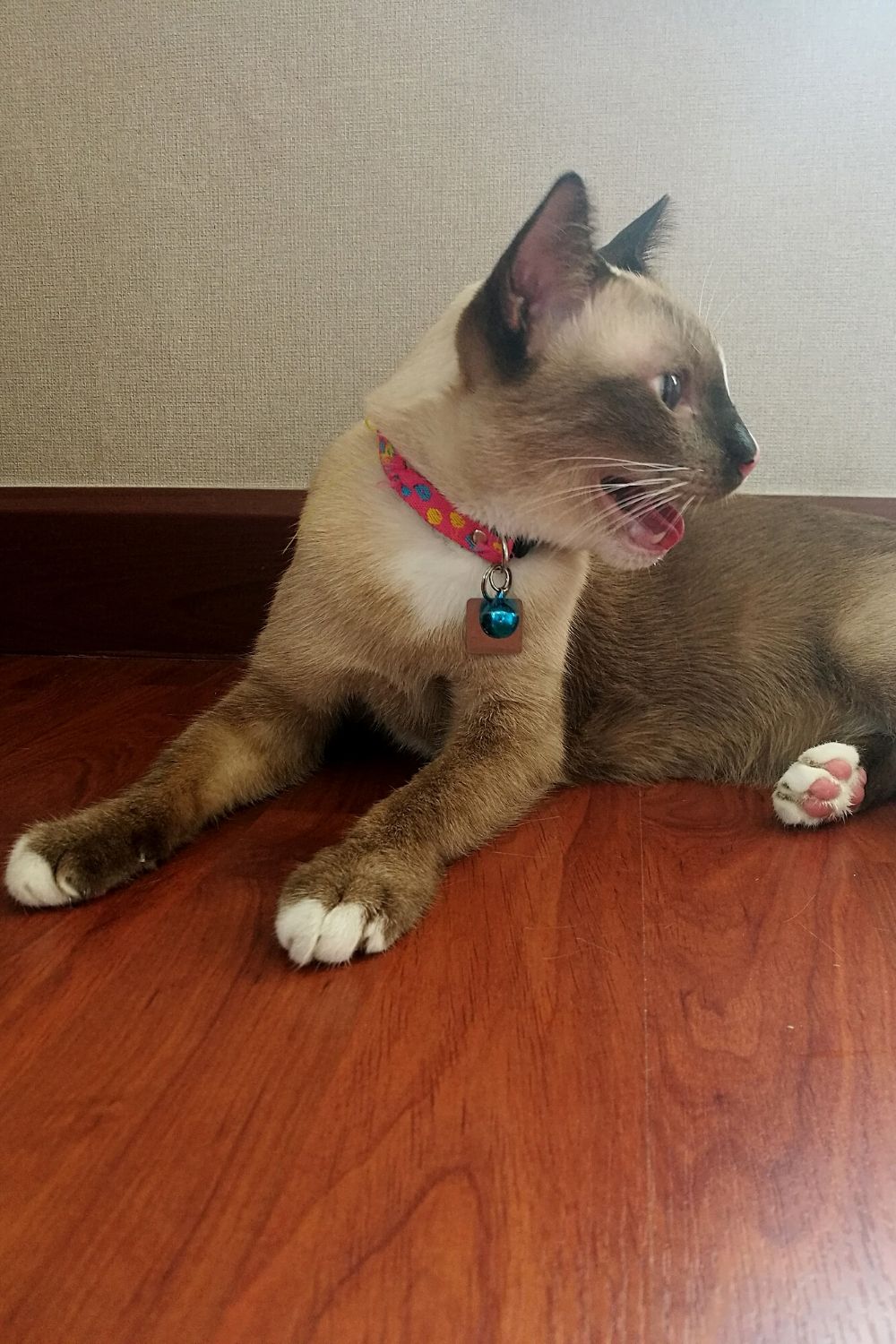 Stress can make a cat make weird noises at night

Other times, the cause of the stress may not be obvious.

At times, the changes can be pretty obvious – for example, shifting houses. Even if the cat usually stays outside, changing homes can have quite the stress on the fluffy one.

More often than not, the small changes in routine make a cat stressed. For example, changing the feeding time can upset them.

Even something as small as changing the food brand for them can lead to stress.

To prevent small things like these in the future, it is necessary to change its routine frequently and do keep it accustomed to changes.

Small changes every now and then go a long way.

Though less likely to be the reason behind your cat’s yowling or growling, there is a chance that the cat just might be in heat. 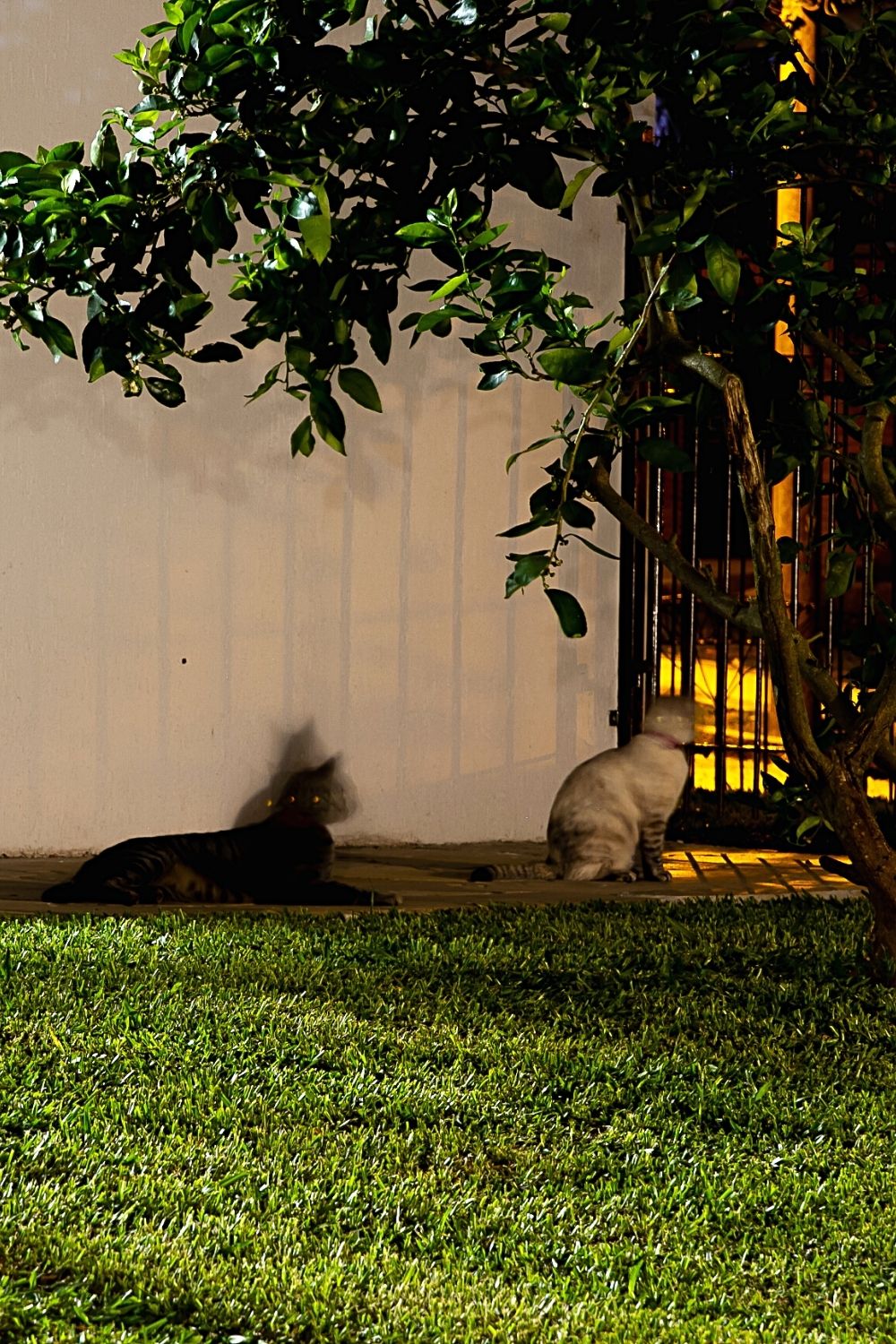 Oh, and did I mention the already-low chances get even lower if the cat is a male?

Practically, the chances of a male cat meowing in the night because it is in heat are close to zero.

This is one of the reasons why getting cats spayed is extremely important. Not only does it prevent unwanted pregnancies, but it also stops unwanted mating calls at night.

Of all the reasons, I would say this one is most likely to be the cause if the meowing is a little abnormal. This is indicated by yowling rather than meowing.

I’ve attached a video at the bottom to help you differentiate between yowling and meowing.

Yowling is nothing like meowing and can be concerning. However, yowling doesn’t necessarily mean the cat has CDS. 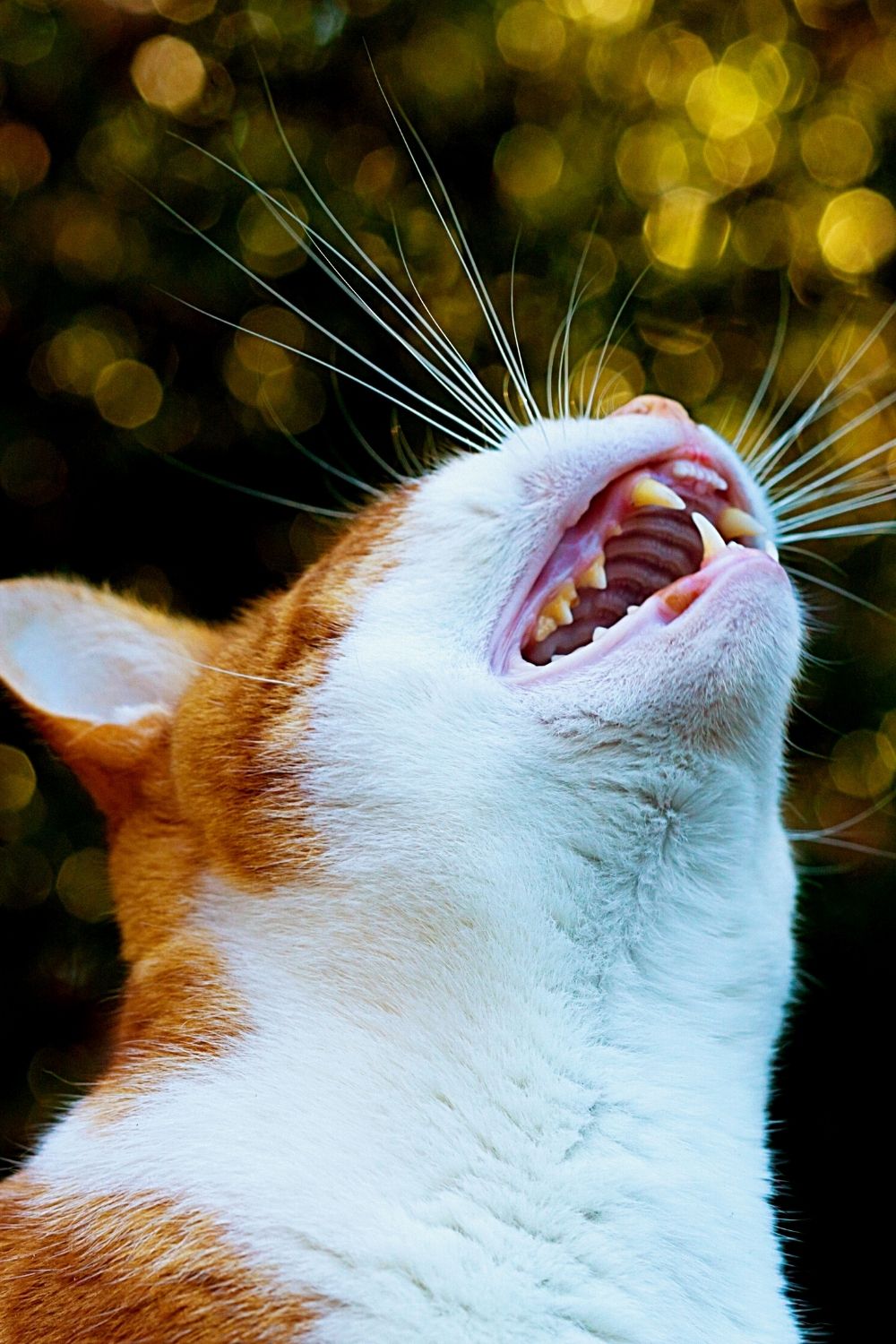 Another possible reason why your cat makes weird noises at night is Cognitive Dysfunction Syndrome, or CDS

Yowling at night, though, can be a strong indication of CDS in your cat.

CDS is generally seen in older cats and can be hard to diagnose because of two reasons:

This disease, which affects the cognition of cats (and, hence, the name), hinders their memory and basic functions.

For example, a cat with CDS will start wandering strangely and won’t be able to get out of simple places.

Not only that, but it will start littering here and there because it cannot remember where the litter box is.

Of all the things, it impacts the ability of cats to remember places and directions the most.

Even I can’t tell whether a cat has CDS judging from its behavior because cats are usually weird and unpredictable.

A change in sleeping schedule, more wandering, and yowling and meowing at night could signify this. It is best to see a vet in this case.

Here are some signs of Cognitive Dysfunction Syndrome.

Cats, though hard to understand at times, can be simple creatures. Just like human beings need food and water, domesticated cats need attention.

However, this is the least likely option on this list.

Though cats are active during relatively weird times, a cat craving for attention at such a time is rare.

This usually happens if a cat has an incredibly messed up sleep schedule (which could temporarily happen if it has moved to a different time zone).

What to Do If the Noises Get Out of Hand

If the meowing/ yowling persists for a while, here are some things to do.

If these still do not stop the cat’s noises, seek a professional.

It could be highly likely that your cat might be suffering from CDS.

Should I ignore my cat meowing at night?

It’s best to ignore your cat when it’s meowing at night. The cat will eventually learn that this is not acceptable and stop meowing.

Why do cats caterwaul?

Cats caterwaul to express their dissatisfaction. This is their way of saying, “I do not like this.”

For most cats, a cat meowing at night is just normal “cat” behavior which could be because of hunger, thirst, they might be craving for attention.

However, a change in routine could be causing stress.

If the meowing turns into yowling or is consistent and loud, and persists for a while, get your cat checked by a vet to know if it has Cognitive Dysfunction Syndrome.