A lion and a house cat do have a big difference between them, but one thing that they share is the ability to hide leftovers for later.

Why do cats cover their food?

This behavior is what scientists refer to as “caching,”. Caching serves as the practice of saving leftover food for later consumption.

The idea of caching food, as both a means to keep it safe, to save it for later, and to make it last longer, is common to both human and animal life.

When humans travel, they often pack food, you don’t want to be hungry without plans.

The purpose of caching food is the same, but the way that cats use this storage method differs.

Cats have been caching food for over 6 million years.

Their food caching techniques are fascinating to watch, and the numerous stories about cats finding ways of storing their food in the most unusual places are simply spectacular!

In this article, we will explain the reason(s) behind the infamous habit of cat food cache.

Why Do Cats Cover Their Food?

Cats cover their food because of their instinct. Cats, being territorial by nature, are very protective of their food and take measures to ward off other animals who they feel could be a threat to them. 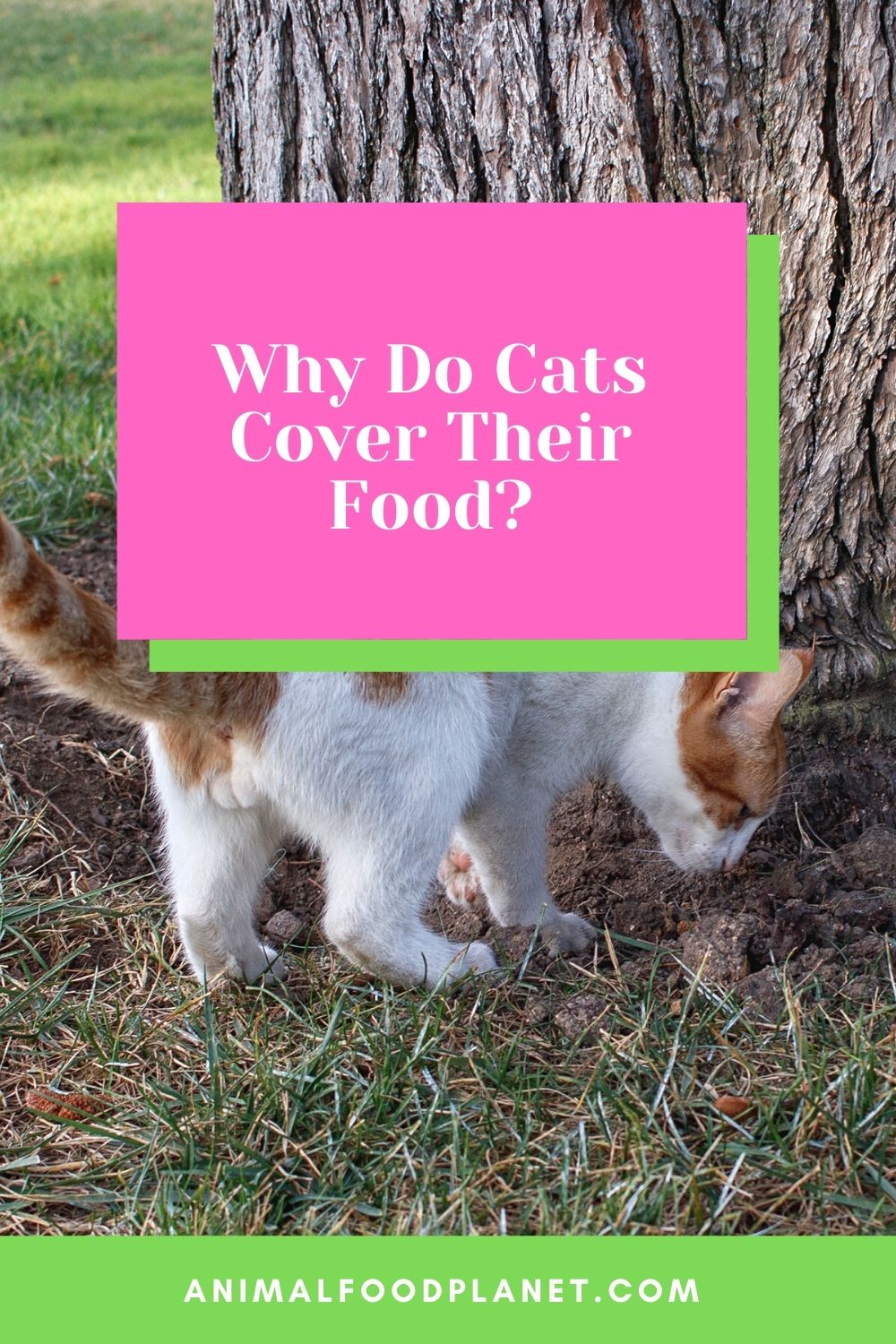 Why Do Cats Cover Their Food?

Why Cats Cover Their Food

There has been a report of food caching among European Wildcats (Felis silvestris silvestris), a species closely related to domestic cats.

Among the big cats, the leopard is best known for caching food. 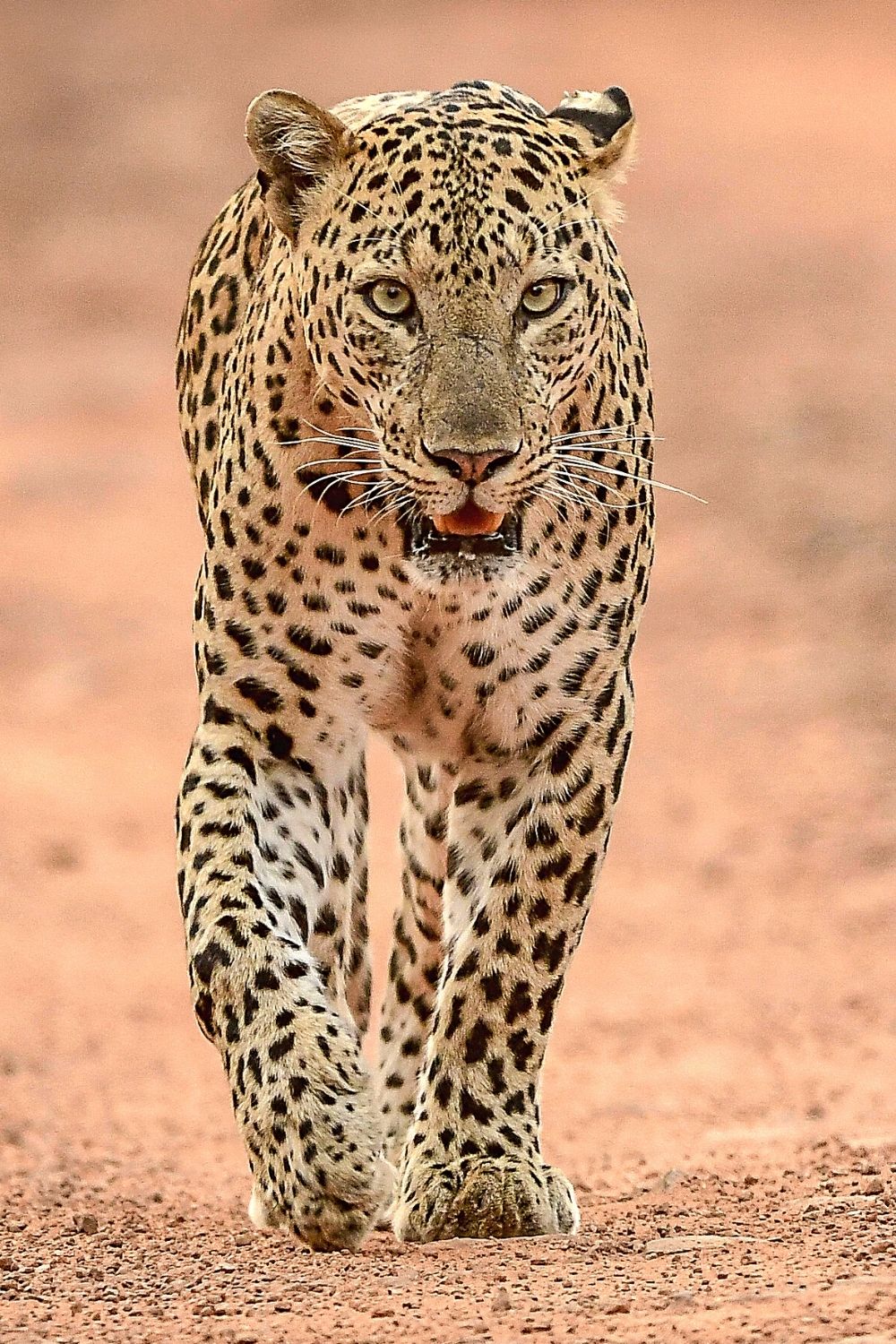 Among the big cats in the wild, leopards are known for caching their food

Lions and hyenas are unable to reach the food that leopards stash high up in trees, so they have to return to the cache often, and likewise North American bobcats.

Bobcats will cover their kills with leaves or other debris when they kill more than they can eat at once, then return later to complete the meal.

Another bobcat may stumble on the buried meal and munch on it. Cheetahs cache food too.

Pumas too. This category of cats usually hunt and kill prey larger than themselves or of their size that they can’t consume in one sitting.

Cats of all sizes and species tend to hunt prey of no greater size than themselves, but they also have the thrifty “cache for later” instinct.

Bringing the kill home where they feel safe leaving it uncovered and unguarded is all that is required for indoor-outdoor cats that hunt to do this.

While eating, a pet cat may begin digging as in the process of burying its leftovers. It is sometimes possible to rake over the food underneath the bowl using a newspaper.

Cached cats are also reported to dig to uncover the food bowl when returning to it when the owner returns to it.

A cat’s instinct to conceal and uncover its cache can be comical to watch, especially if there’s nothing tangible to uncover.

How Normal Is it: Cats Covering Their Meal

As most cat owners will tell you, cats don’t joke about being picky and borderline critical about their meals.

But when some cats cover up their leftovers, it leaves many people wondering, “Is it normal for cats to cover their food?”

Cat owners who happenstance have watched their cats devour a pigeon would tell you how their cats ate a part of it and left the rest nearby, like how they leave dead animals, to be eaten later.

Cats seem to act like intruders are kept away from the leftovers by the proximity of their owner, so maybe the cat feels its food is just as safe near its owner!

This behavior is perfectly normal for a cat. You must not punish the pet.

That won’t help but instead, may create actual behavioral issues.

If you can manage and schedule the feeding routine of the pet, you may end up reprogramming your pet’s instincts.

How to Curb The Food Burying Behaviour In Cats

This behavior you’re seeing from your cat may be perfectly normal.

Most behavior books and websites suggest the cat is burying the food because it treats it like feces.

Cats might be throwing food away probably because they rather have something else.

When the food or feeding location isn’t to their liking, a cat might try to bury the food bowl.

Cats in the wild hide their feces so it doesn’t attract predators (territory owners usually leave their feces in the open to announce their presence). 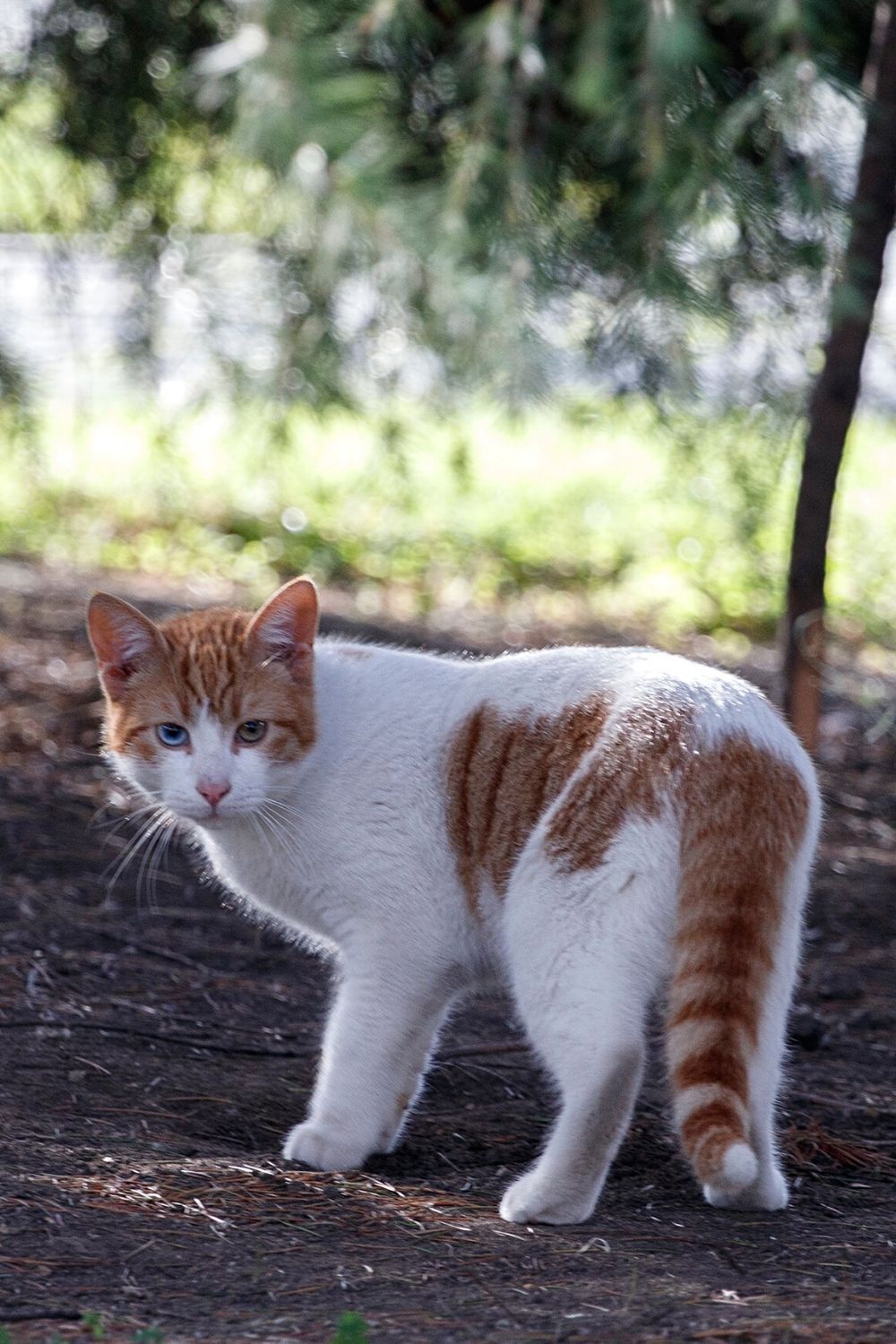 However, punishing this behavior won’t curb the bad habit; it may even cause real behavioral problems.

Instead, try to find out the reason your cat is burying its food.

However, there are ways to curb your cats from covering their food.

Is Your Cat Covering Its Food, Too?

Many cats have been observed covering their food after eating, then uncovering it to eat it again later.

This is theorized to be a holdover from domestic cats’ wild ancestors, who would cover their unfinished meals to ensure that other animals did not see the food source and raid it.

The food caching behavior has been observed in multicat households as neurotic, such that the cat makes a vain attempt to hide its food from competitors.

In this pattern of behavior, the cat will generally look for something to cover the food with after a meal.

Some cats prefer small spaces such as cupboards or under furniture, while others will scratch at their litter box until the floor is covered with sand or dirt. 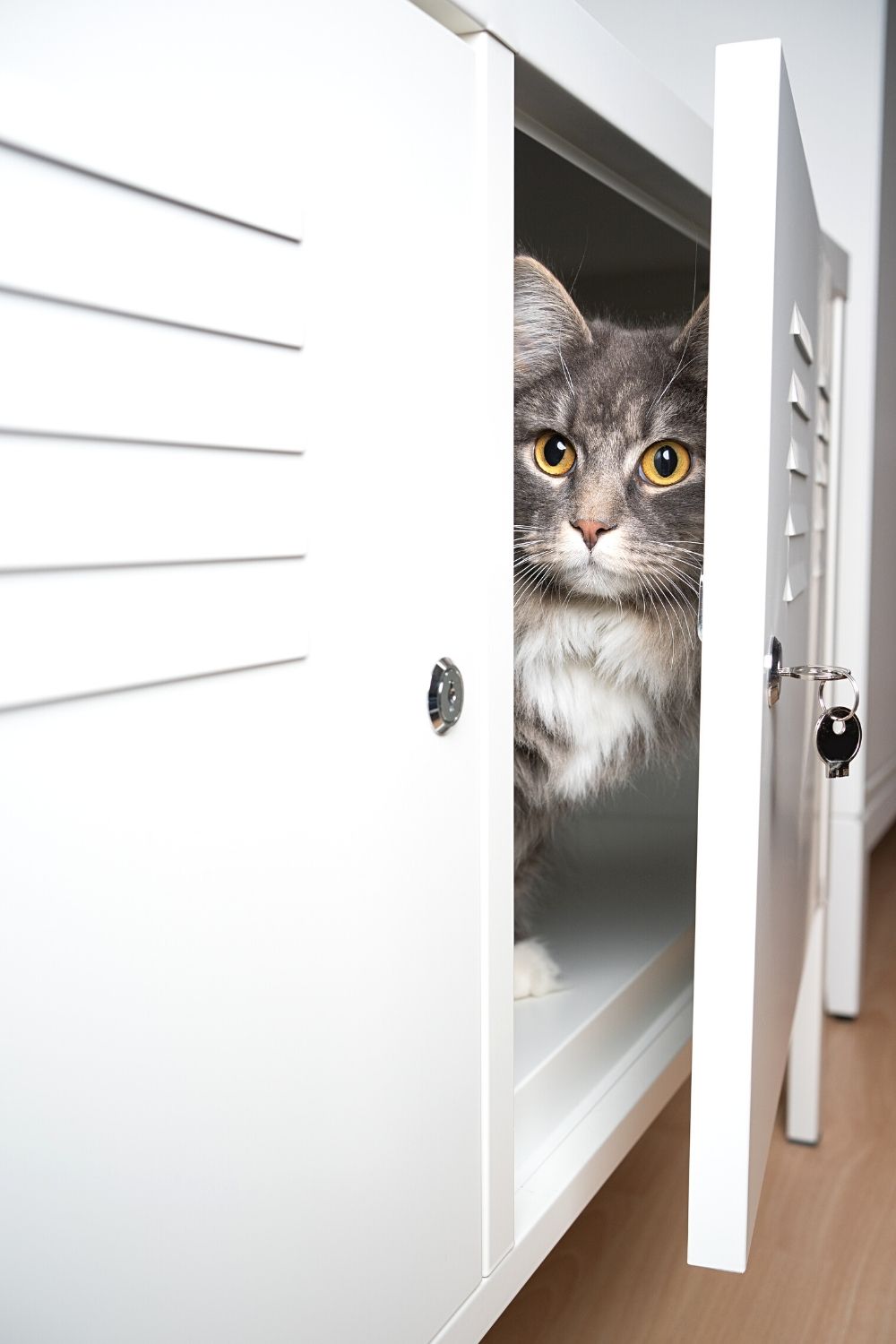 Some cats, instead of burying their leftovers, find small spaces like cupboards to hide them

Some cover with strands of hair left behind while grooming themselves.

Regardless of how they hide their leftovers, here are the major reasons why cats do what they do.

Frequently Asked Questions About Why Cats Cover Their Food

Is Cat Caching Food Bad For Their Overall Health?

Cat caching is not bad for the feline’s health. This behavior can happen both before and after feeding time. Your cat may appear to be digging or burying something. But, this behavior is perfectly normal for them. Their relatives in the wild do it too. Your pet is not weird.

Is Caching Unique To Only Cats?

Caching is not only unique to cats as dogs also cache their food. History and nature may have made cats and dogs be perpetual mortal enemies, but it seems like there are differences and no similarities. However, both canines and felines cache their food after hunting in the wild.

Since When Do Cats Cover Their Food?

Cats have been caching food for over 6 million years.

Conclusion About Why do cats cover their food

You might raise an eyebrow when you see your cat burying its food, but this behavior is 100% normal.

However, check if your pet is protesting the type or quality of food it is getting, such as when your cat suddenly slaps you.

Check if competition from other cats within the territory is telling on it and it is trying to cope.

Do make use of the information and tips provided in this article about how to manage the behavior of your pet.

Read about why a cat is foaming at the mouth next.