The magnificent tiger is at the top of the list of ruling animals of the jungle. This animal is one of the top predators in the wilderness and preys on smaller wild animals.

The tiger has many assets that make it scary if other smaller animals or even humans meet up with this fantastic creature.

According to Animaldiversity.org, a tiger has even been seen dragging a gaur bull weighing 1543 pounds (700kg).

Why are Tigers So Scary?

Tigers are so scary because a tiger can quickly overtake a human being unless they have a gun on them that they can use to defend themselves against this animal. They can be very near to their prey without anything seeing them. Their colors blend in with their environment. The tiger is a carnivore. It must eat meat at least once a week for the protein content of smaller animals and even human beings. 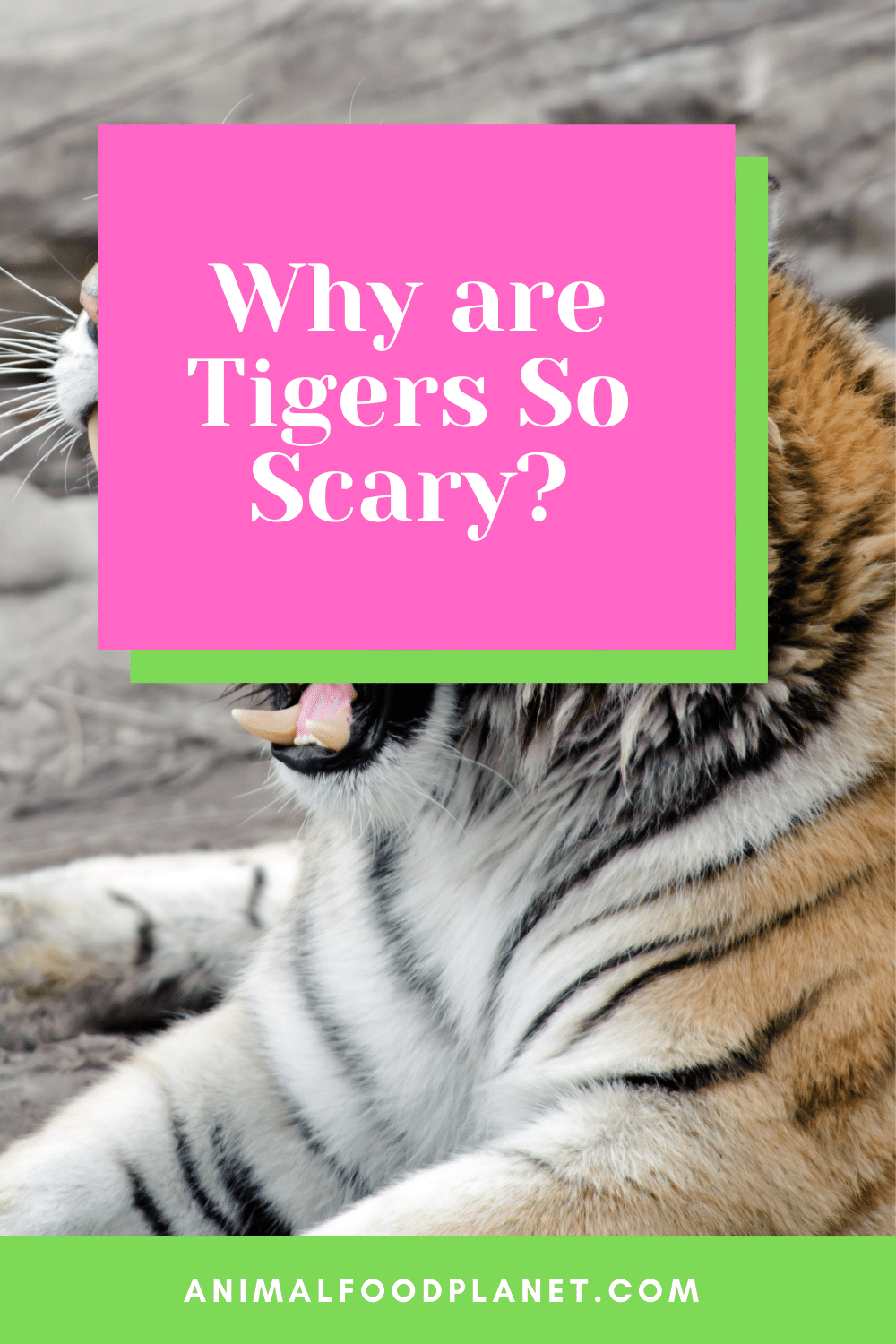 Why Are Tigers So Scary?

What Makes Tigers So Scary?

Human beings find the tiger scary because they are no match for this animal should the tiger attack them. Consider first its size and muscular body.

This gives this animal exceptional brute strength. Another thing that makes this animal so scary is its big mouth and razor-sharp teeth. A tiger also has sharp retractable claws.

A tiger can pounce on its prey and kill it with its bite and claws. In two miles A tiger’s roar may be heard. This is scary when you are out in the wild and know that this beast is close at hand.

The giant cat is the biggest cat known to man as the wild tiger. This animal’s body is very flexible and agile. The tiger can pounce – run – jump – and climb in seconds.

Other smaller animals do not have a chance to escape when this cat is after them for its weekly meal. This king of all cats has powerful jaws with sharp teeth.

Their sense of smell is more sensitive than most animals and humans. This puts them on the trail for their next meal.

Animals who share a living space with a tiger in the jungle fear this beast. Several things make the tiger a scary animal.

These animals typically weigh over 200 pounds – up to at least 600 pounds or more. It requires a weekly abundance of protein to meet its nutritional needs.

The tiger’s diet consists mainly of meat. Tigers eat upwards of 80 pounds of meat per week. Its favorite foods are antelope, deer, and water buffalo.

It avoids hippos – elephants – humans at all costs. After eating one colossal meal, the tiger’s belly is content for several days.

Tigers are scary to other smaller animals when approaching them with a vicious snarl and gut-wrenching roar.

Smaller animals know that they are no match for the stately tiger and could be its next dinner. Many smaller animals will try to avoid this creature at all costs.

The only way that a human could fight off a tiger to save themselves is by shooting the tiger with a gun or bow and arrow.

When hunting its prey, a tiger is sly and sneaky like all cats. A smaller animal does not know the tiger is near until it is too late to escape. 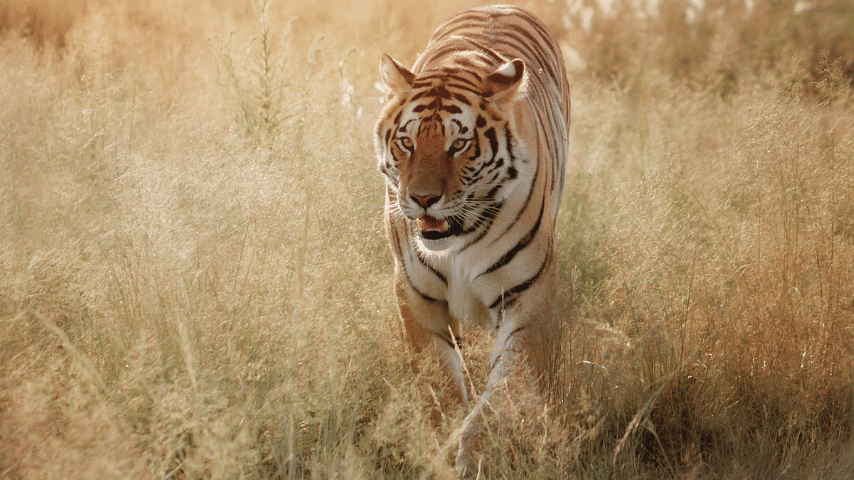 Giant Cat Is The Biggest Cat known As Wild Tiger

How Do Other Animals Compare to the Tiger?

Some animal specialists say that they know of no other animal that would eat a tiger. A hippopotamus or elephant may be capable of killing a tiger.

A human can undoubtedly kill a tiger or sedate it for captivity. Tigers are smart enough to keep their distance from hippos – elephants – and humans.

It is also said that a tiger is known to attack a wild pig. A wild pig could put up a good fight with a tiger and come out a winner.

The tiger knows that he must first gain control of the pig by using its sharp teeth and claws. 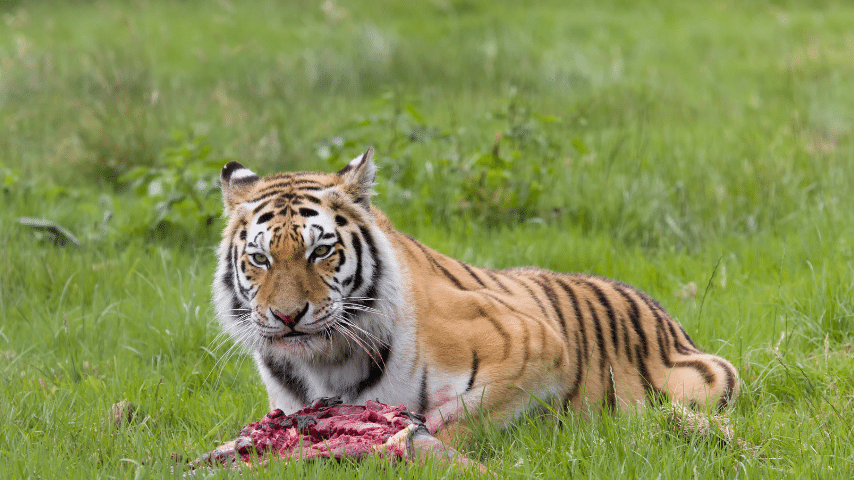 Tiger Is Known To Attack A Wild Pig

Tigers depend almost solely on daily protein to survive. A tiger guards its territory against other tigers and sprays trees and bushes with its urine to let other cats know the land is theirs.

Allowing another tiger to move in on its territory means a dwindling food supply for them.

Tigers can become aggressively scary towards another unwelcome tiger whose goal is to move into its territory for food supply.

A tiger is not afraid to viciously snarl while showing its sharp teeth and claws to another tiger to protect its food supply. One tiger can be scary enough to another cat to chase it away. 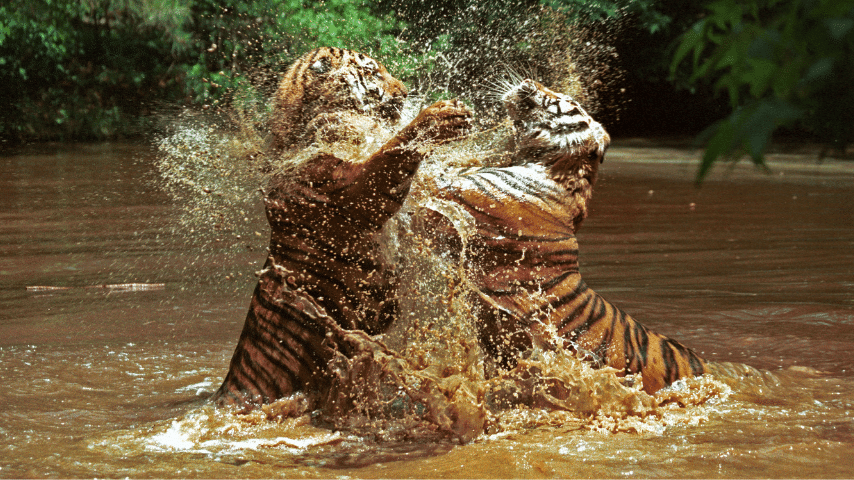 Are Tigers Scary to Humans?

Tigers are scary to humans for the same reasons they seem threatening to other animals. The tiger’s big mouth is full of sharp teeth that scare humans.

Their long nails and vicious snarl put untold fear into a human being. Researchers discovered that the tiger is just as fearful of people as humans are of them.

Tigers will usually keep their distance from any human. If a tiger feels threatened or its cubs are in danger.

This is about the only reason a tiger will put all its fears on the back burner and use all its strength to attack humans.

Tigers rarely wander off into nearby towns due to their fear of humans. Tigers do not like humans.

Tigers do not trust people and feel more secure in their natural surroundings. The only time that a tiger may attack a human is if that person provokes the tiger into an attack.

Some tigers are incredibly aggressive, and humans do not have to provoke them. The tiger sees the humans and attacks them. 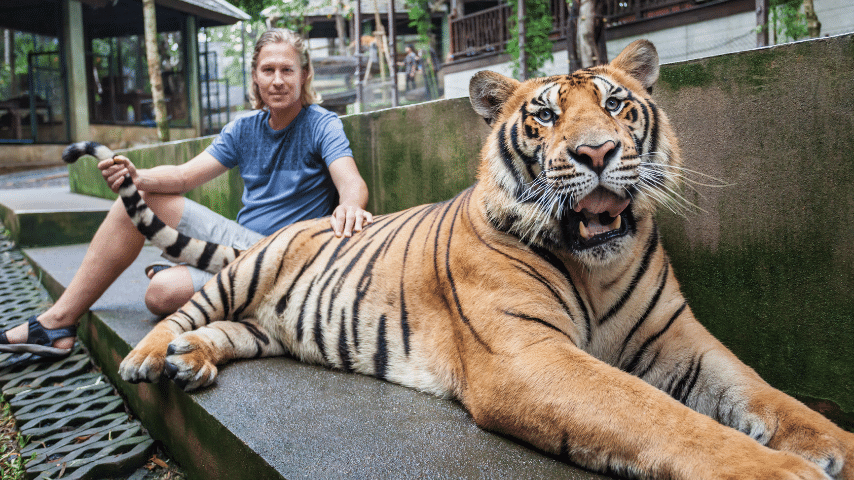 Frequently Asked Questions About Why Tigers are So Scary

Why do zoo tigers snarl at each other?

There are two reasons why tigers may snarl at each other.

What would make a scary tiger attack a human?

Tigers must be in exceptional circumstances for them to attack a human or group of humans. The following is why a tiger may attack, kill, and eat a human.

Do tigers swim? Are tigers afraid of the water like most cats?

Wild tigers love swimming in the waters and swimming distances of up to five miles have been recorded.

In Conclusion – Why Tigers are So Scary?

These majestic animals are in a crisis. That is a scary thought!

Wild tigers are scary in their own right. What is so frightening about tigers is not the tigers per se.

This breed of cats in the wild is decreasing at an alarming rate – this is scary!

Captive tigers suffer because they should not live a confined life unless permanently injured and can no longer survive in the wild.

Tigers are fast becoming extinct. Some countries like the UK allow citizens to keep tigers as pets.