A leopard and a mountain lion; both are powerful, tough, fierce, and fast. The mountain lion is called the cat of many names and symbolizes strength throughout history.

The leopard is Africa’s most muscular cat, pound for pound. Who would win a fight between these two cats? Who Wins the Fight Between Leopard and Mountain Lion? 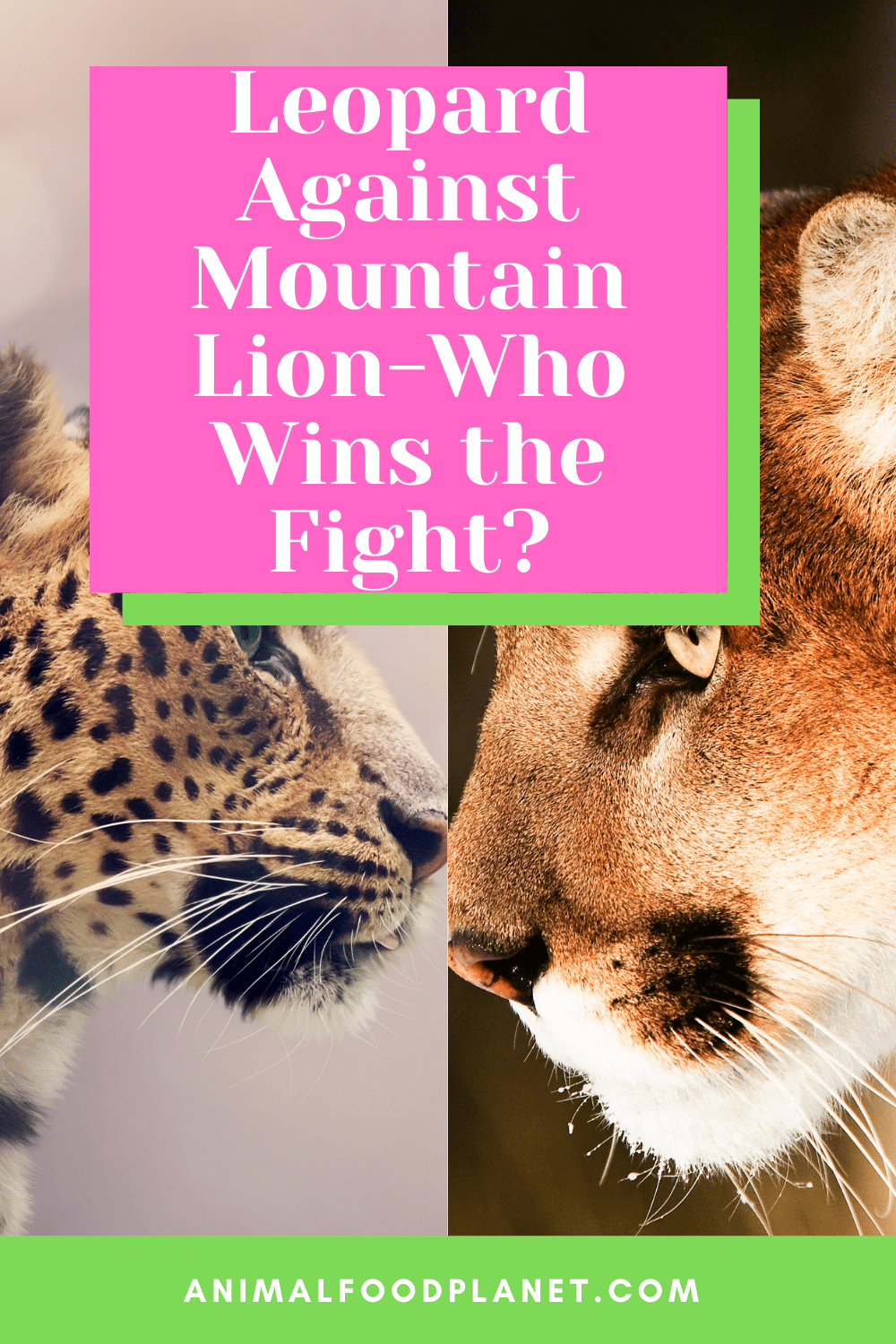 The Mountain Lion – The Winner of the Fight

The mountain lion is revered by Native Americans as the most powerful and fearless animal and the greatest of hunters.

The mountain lion is called the cat of many names. Depending on where you reside, it’s a cougar, panther, puma, or mountain lion.

It is similar to the African Lion, but unlike its counterpart that prefers to live in the pride of many lions, a mountain lion is a more solitary animal, choosing to live and hunt alone.

A mountain lion does not roar but has a unique way of communication. It will shriek, chirp, growl, or purr due to its unique larynx, different from other cats.

It will sound more like a scream in a fight, which is dominating. 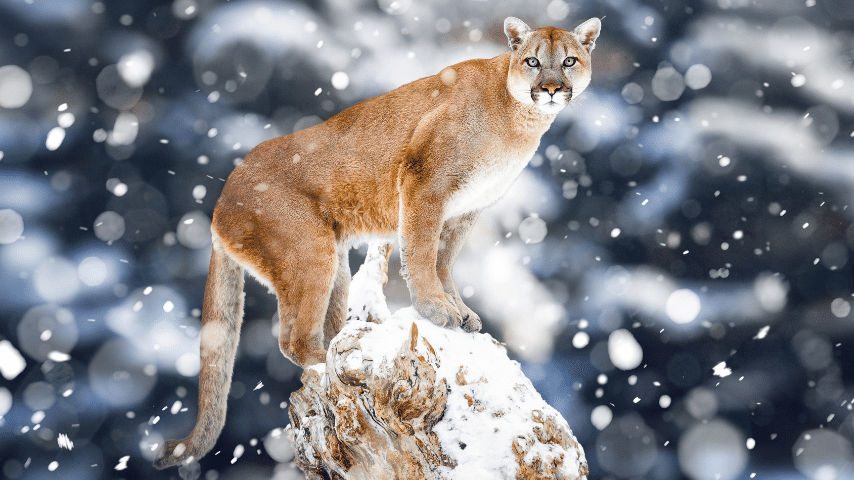 A Mountain Lion is a Larger and Stronger Cat

The fourth-largest cat of all the cat families is the mountain lion. It is beaten in size by the tiger, the African Lion, and the jaguar.

Stealthy, sleek, and powerful, it has a bite force quotient of 112 BFQs and retractable claws to match.

He is built with strength and a physique designed for his many skills, and he is an excellent climber, jumper, and runner.

He can jump straight up into the air with mighty leaps, reaching heights of over five feet.

From nose to tail, they are 5 to 7 feet long. The most notable feature is the long, heavy tail which measures a third of the animal’s length. 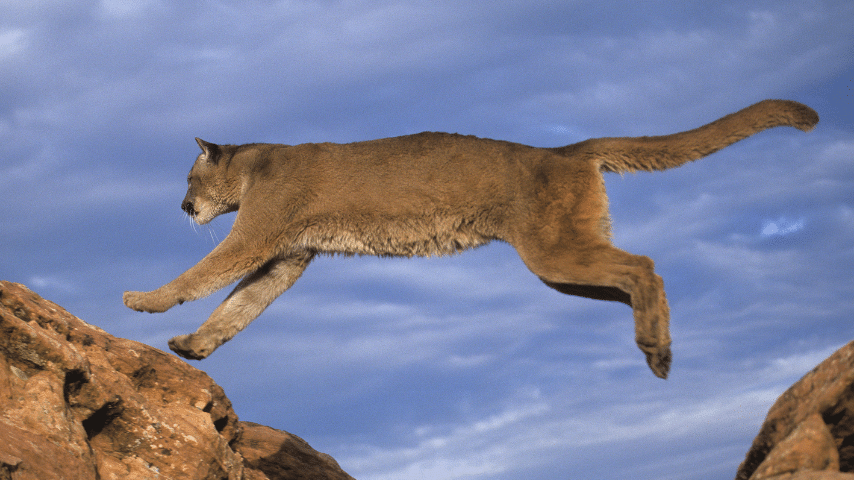 The Mountain Lion Will Fight to Death and Dominate Their Territory

They will mark their territory by urinating and leaving large scratch marks on trees, and they avidly defend their area, which can be 100 square miles.

They have been known to fight other mountain lions even to death to protect their territory. 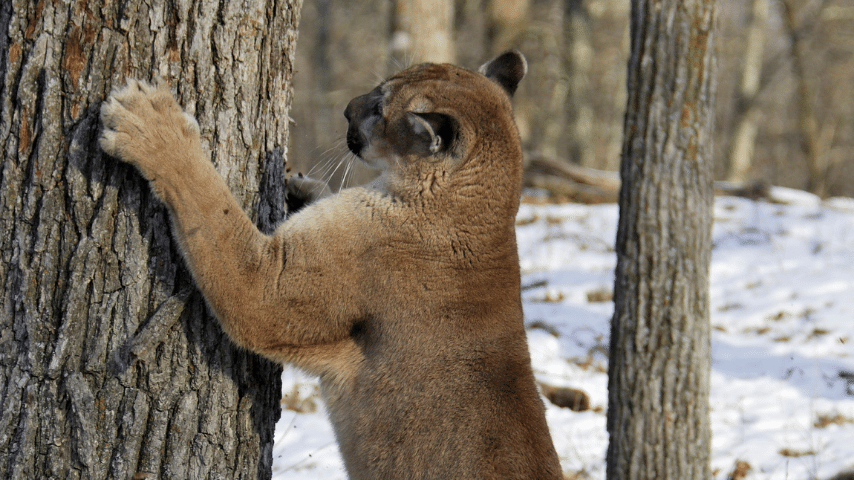 Mountain Lion Regularly Takes Down and Feeds on Large Animals

They are carnivores with large, sharp canine teeth designed for stabbing and tearing their prey apart.

A mountain lion preys on larger animals and is known to kill one deer-sized animal every six to twelve days.

Although at times, it will kill and hide its prey more frequently. It can easily take down a mule deer with a mighty leap and a bite to the back of the neck or head.

According to the University of Santa Cruz, Mountain Lions are not made for sustained high activity or running. They stalk prey and then use a burst of energy to bring it down.

Tests were done with Mountain Lions using treadmill studies to verify this. 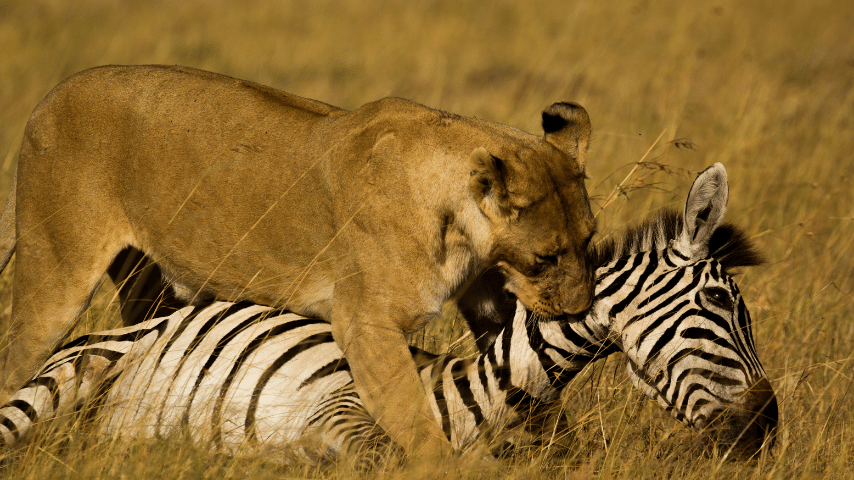 The Leopard – Would Be a Tough Opponent

Like the mountain lion, the leopard prefers the solitary life and only gets together with other leopards for mating or the female rearing of the young. 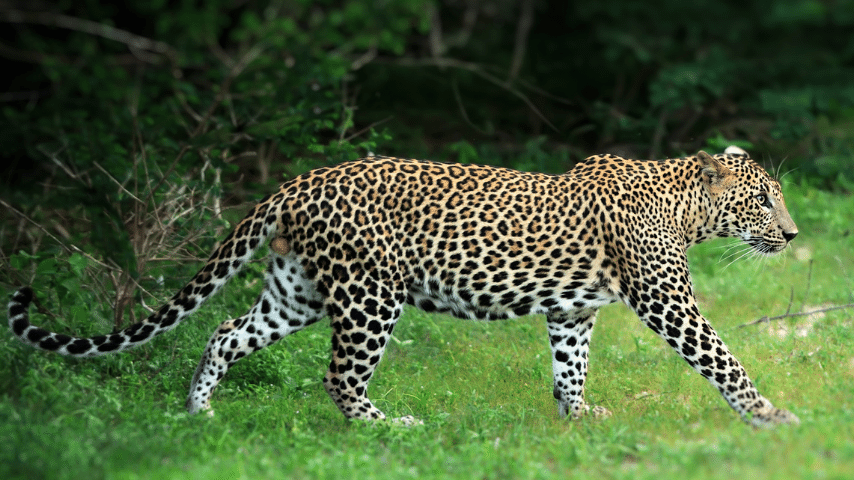 The Leopard is a Smaller Cat

One of the smallest cats, a male, will only weigh 80 to 168 pounds; he stands about 28 inches from the ground to shoulder and can range from 5 to 6 feet in length.

The leopard sports a spotted look with darker spots called rosettes that keep him well hidden among the tree foliage.

The two can have comparable sizes with the larger leopards and smaller mountain lions. 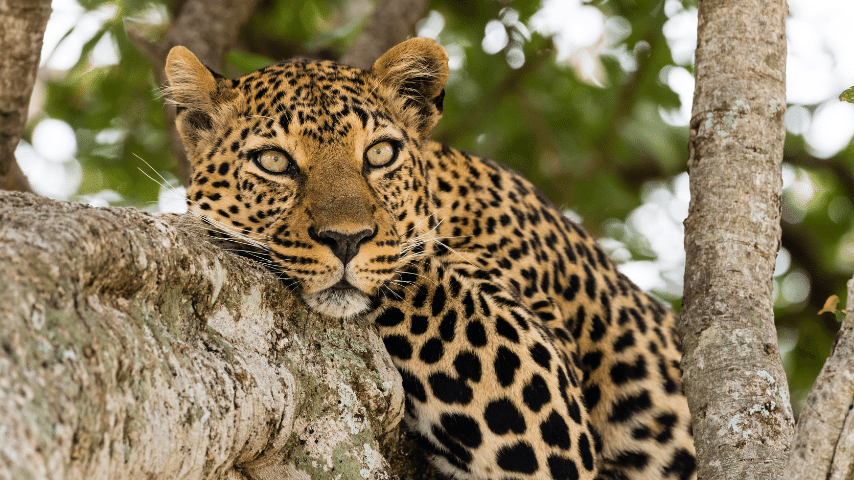 Leopard Rosettes Can Keep Him Well Hidden On Tree Foliage.

Leopards Hunt Much Smaller Animals and Occasionally a Large Animal

Like the mountain lions, they are carnivores though they eat mostly smaller animals, like monkeys, porcupines, fish, reptiles, and birds, but are known for having the speed and ability to take down an antelope. 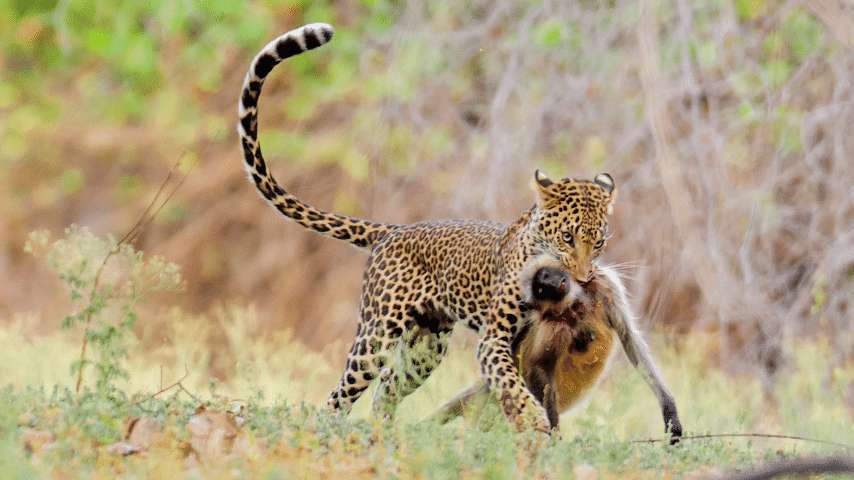 The Leopard Is Agile and Strong

The leopard is an excellent climber, and it has incredible strength.

No other cat is as agile and flexible as the leopard, so they surpass the others with the ability to climb into the trees and the heights they travel.

Pound for pound, they are the most muscular cats in Africa. They are so strong they will carry their prey high up into trees to keep it away from scavenging lions and hyenas.

They have a bite force of 94 BTQs, not as aggressive of a bite as the mountain lion. 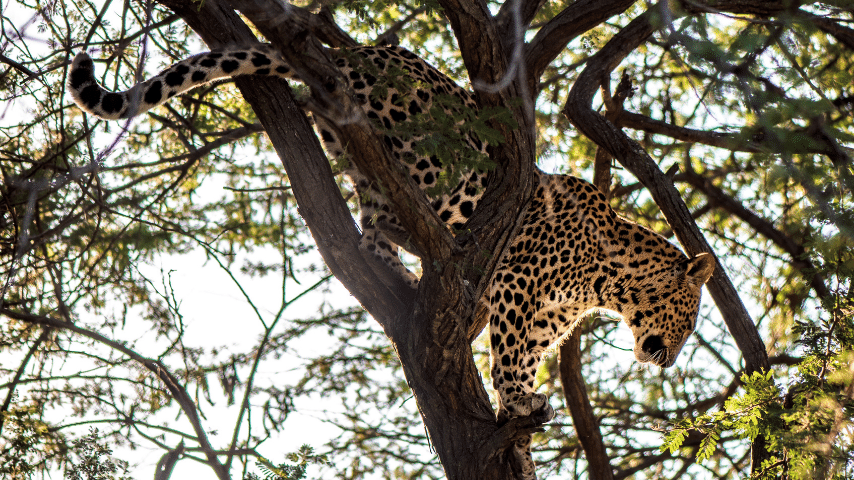 Leopard Is An Excellent Climber

The Mountain Lion Even Dominates the Hunt

The mountain lion is a masterful, stealthy hunter.

It will remain quiet until it gets close enough, and with easy climbing and jumps of over six feet, it will pounce on its prey with teeth flaring and retractable claws outstretched.

They hunt at any time of day or night, but are most active between sunrise and sunset. With no natural enemies, the mountain lion rests atop the food chain.

However, they do compete with bears, wolverines, and wolves for their food.

The Leopard Uses Sneakiness to His Advantage

The leopard relies heavily on its ability to stay hidden as it sneaks up on its unsuspecting prey.

It preys on mostly smaller susceptible animals at night, but they are opportunists and will not pass up daytime targets.

He is an agile climber, and once done eating, he will drag the remains of an animal as large as an antelope up into the branches of the trees.

Leopards compete with cheetahs, hyenas, wild dogs, and the occasional lion pride for their food and often have to fight for their meal.

They don’t belong at the pinnacle of the food chain.

Where do Both of These Animals Live?

To note first is, that leopards and mountain lions seldom cross paths. Mountain Lions are out at dawn and dusk, leopards mostly at night, and they both live in different regions.

The leopard lives in Asia, primarily South Asia, the Indian subcontinent, and Africa. Mountain lions are more in the Americas, in about 28 countries from Alaska to Chile in South America.

If they Fought, Who Would Win

Just for this scenario, let’s say the mountain lion and the leopard cross paths, and not only that, they are about the same size. It would be quite a fight.

The mountain lion would win due to its stronger bite, extra body mass, and overall strength. However, it would not be without difficulty.

The leopard’s ability to hide, strength, and ability to fight would be quite a match for the mountain lion.

So, that being said, both animals would likely suffer severe injuries in the fight.

The mighty mountain lion would provide a deadly blow to the leopard due to the bone-crushing jaws and overall strength.