People who adore reptiles – especially beginners – seem to love leopard geckos. This is unsurprising since leopard geckos are resilient creatures and easy to maintain.

These lizards are sandy yellow with dark spots. They are normally found in Afghanistan, Northwest India, Iraq, Iran, Pakistan, and Vietnam.

Owners who take good care of their geckos could have a pet for 20 years, so anyone who gets a leopard gecko as a hatchling still has a fair few years of looking after it.

A teenager who buys a hatchling can reasonably expect to still be looking after it in his/her 30s! For this reason, it is a terrible idea to get a leopard gecko on a whim.

How Long Do Leopard Geckos Live?

Out in the wild, leopard geckos normally live up to 15 years. In captivity, leopard male geckos can live to about 20 years while females live to about 15.

How Old your Leopard Gecko is

If you did not acquire your gecko as a hatchling (see below), you might wonder at the age of your pet. Unfortunately, telling the age of a leopard gecko might not be a straightforward matter.

Growth charts can be useful for telling the age of leopard geckos, but they do not work after 18 months. 18 months of age marks the end of a leopard gecko’s growing stage.

The best thing to do is to keep track of their length and weight. If they show rapid growth, they are probably between six and ten months old, which is the juvenile stage for leopard geckos.

Another way is to compare your pet to a younger leopard gecko of the same size. If your pet is darker in color, then it is probably older.

Tip: Older, sexually matured males may display aggressive behavior, which is a sure giveaway that they are at least one and a half years old.

For a female leopard gecko, the one-and-a-half-year mark is when she will begin to display nesting behavior.

The Life Stages of Leopard Geckos 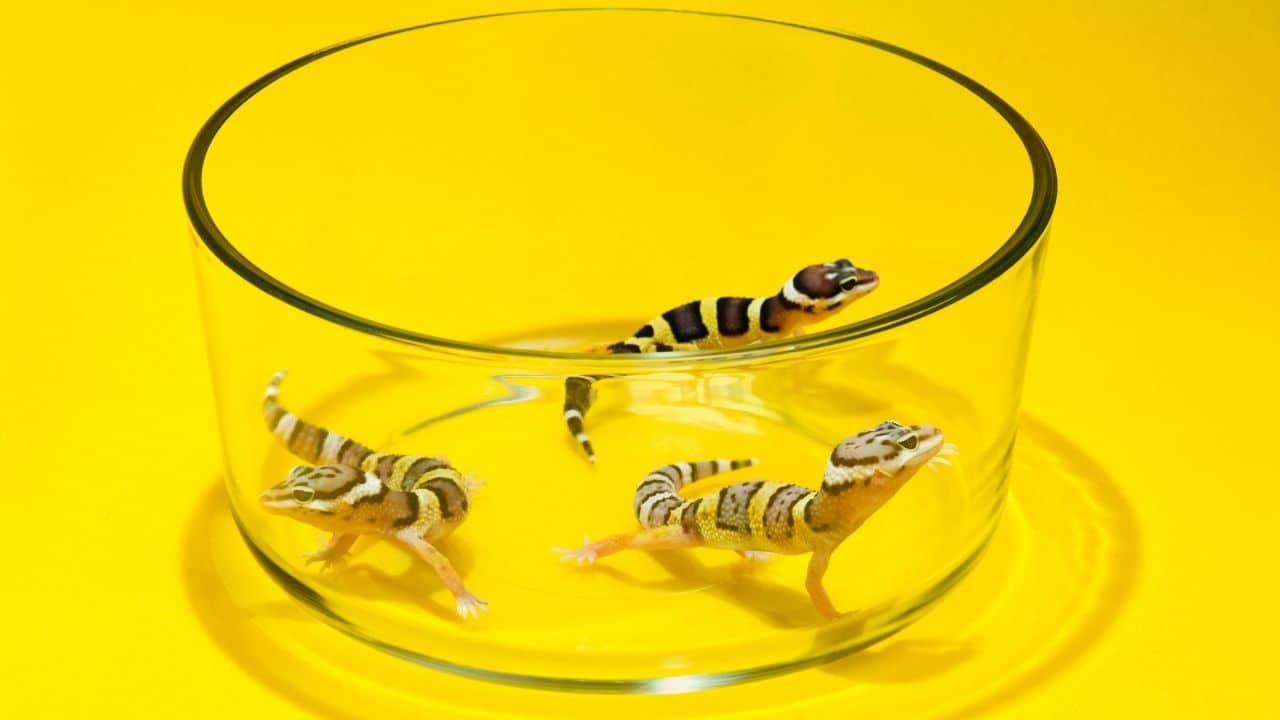 When leopard geckos first hatch, they are approximately three and a half inches long and weigh about three grams.

At this stage, leopard geckos will survive on their egg’s yolk. They will continue this way until the first time they shed their skin.

As hatchlings, leopard geckos shed once every 10 days. To survive, they eat old skin as it is good for their growth as well as development.

A day or two after eating their skin, leopard geckos will start preying on insects in the wild.

If you are keeping a leopard gecko as a pet, you must step in and lend nature a helping hand by supplying your pet with suitable insects to eat.

At this stage (generally reckoned to be between the ages of four and six months), leopard geckos often shed approximately every 10 days.

They weigh as much as 30 grams at this point and will have grown to between four and six inches in length. The juvenile stage lasts for around 10 months. 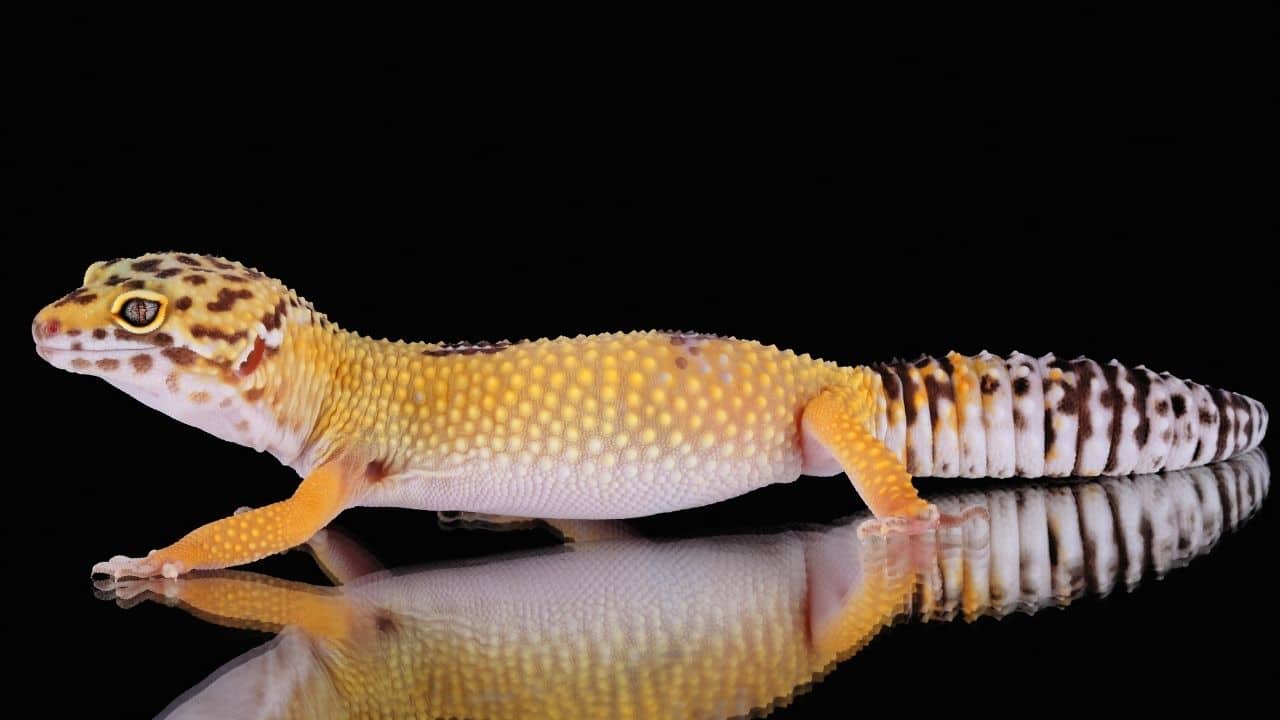 In the adult stage, leopard geckos can weigh anywhere from 50 to 100 grams and grow between eight and ten inches in length.

From as early as their 20th month to as late as their 25th month, leopard geckos reach sexual maturity.

How to Give Your Leopard Gecko a Healthy, Long Life

Provide your Leopard Gecko with a Clean Environment

A dirty environment is the main reason for most health problems that affect captive reptiles. Dirty enclosures are the cause of many fungal, parasitic, and bacterial diseases.

These infections can lead to many health problems, including intestinal, respiratory, or reproductive system infections.

Luckily, leopard geckos have a tendency to only use one part of their tank for excretion. To ensure cleanliness, keep to a bi-weekly or monthly deep-clean schedule.

Also, disinfect anything you intend to put into the tank. That way, you will keep the tank clean, which helps in protecting your pet.

Provide your Leopard Gecko with a Well-regulated Tank

Leopard gecko tanks should be at least 20 gallons in volume so that you can provide the tank with multiple hides. Aquariums make passable enclosures, but screened cages make the best tanks because they give good ventilation.

Leopard geckos require a tank with a relative humidity of between 30% and 40%. This can be augmented with a fresh bowl of water.

Maintain the correct humidity to help your pet’s shedding.

Tip: It is important to have a good hygrometer to monitor humidity in the tank.

Gut loading your pet’s food will ensure that it gets the correct amount of vitamin D3 and calcium. It’s especially true if there’s no UVB lighting.

Give multivitamins, vitamin D3, and calcium daily to juveniles and every other day to adults.

Is there a difference in how long female and male leopard geckos live?

When, and for how long, will my pet be sexually active, and what should I do about it?

Leopard geckos become active sexually when they attain about 30 grams in weight and when they’re aged between 18 and 24 months. Leopard geckos will continue to be sexually active throughout their lives. But, you don’t have to provide them with either a sexual partner or a platonic ‘friend’ as they’re solitary creatures.

Pet leopard geckos should live between 15 and 20 years. Females will generally live a shorter lifespan.

Regardless of gender, geckos need a healthy diet and well-managed living conditions to survive into their old age.