As the largest living land animal, elephants are imposing creatures. Standing as tall as 13 feet tall at the shoulder, they are intelligent and friendly once they get to know you.

However, when elephants and hippos find themselves on the same turf, their gentle demeanors can become fierce.

Hippos do not seem to get along with much of anyone, not even their kind. Male hippos are more likely to hurt each other than to be injured by any other animal.

Hippos, elephants, and other creatures of the plains of Africa and Asia find themselves foraging in areas that are decreasing in size due to man and climate change.

Elephants and hippos fight over turf, and they will fight to protect their young.

Who would win in a fight between elephants and hippos?

A male elephant’s tusks average 6 feet in length and are a formidable weapon. Combine them with a massive weight of over 8 tons, it can beat all comers of the 4-legged variety, one on one. Yes, even the hippo, which kills an average of 500 people a year, will succumb in a battle with a full-grown bull elephant.

They aren’t the only ones that do. The grazing and hunting lands of elephants, hippos, lions, tigers, and other animals found in Africa, mean they will cross paths from time to time.

These grazing lands are diminishing due to global warming. The encroachment of man puts elephants and hippos in each other’s paths because it reduces their territory. 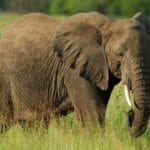 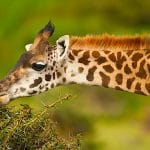 Elephants are not usually aggressive animals unless there are young to protect or grazing land to fight over.

The African elephant has no natural predator but man, who will kill them for their tusks. However, the lion is the only four-legged animal with the ferocity and lack of fear to take an elephant down, but he will need a partner.

Although a hippo is not as hefty as an elephant, they have a hide that is two inches thick along their flanks. It is as tough as leather and gives the hippos armor from threats such as crocodiles, hyenas, leopards, and lions.

The biggest threat to a male hippo is another male hippo. Although elephants have killed hippos when one gets an attitude and decides they can take one on due to territorial disputes.

A hippo has greater speed than an elephant and can reach 30 miles per hour on a full run. It is hard to believe that such a big ungainly animal can run that fast.

An adult bull hippo ranges from 10.5 to 16.5 feet in length and about five feet high at the shoulder. They are herbivores, and they do not have tusks, but they do have large tusk-like incisors that will grow to about two feet in length.

Hippos spend most of their time deep in water holes to cool and graze on the water grass around ponds and rivers. However, they require about 100 pounds of food a day to maintain that massive weight, which takes a lot of grazing.

Elephants are Gentle giants – Until They’re Not

African elephants do not reach maturity until they are between 35 and 40 years of age. At that time, the bulls become massive animals that can protect their herds.

Elephants live between 60 and 70 years, so they are with their families for a long time, and sire many young elephants.

Standing between 10 and 13 feet at the shoulder and weighing between 15,000 and 18,000 pounds, it is no wonder they are safe from all animals but men and lions.

Elephants can even give birth to 200-pounder babies. However, they can stand unaided within minutes after birth and travel with the herd within two days.

Their six-foot tusks are not their only weapons, though. An elephant can lift to 700 pounds with the power of the 40,000 muscles in its trunk.

They can pick up a threat and dash it to the ground with this superior strength. Look out, lions!

Elephants require about 150 pounds of food a day to maintain their heft and proper health. This means they’re on the move constantly, and during that travel, they will encounter other animals.

Some will be uneventful, while others could tell that a hippo and elephant disagree.

Frequently Asked Questions about a Fight between Elephants and Hippos

The Greeks called hippos “river horses,” as they can spend over 15 hours a day submerged to their eyes. This is where their encounters with humans occur. Often a hippo will rise from the water under a boat and spill its occupants into the water.

How long do hippos live?

Hippos reach maturity at five to six years and live until they are between 40 and 50 years of age.


Who Would Win in a Matchup between an Elephant and Hippo

Although a hippo can cop a mean attitude, they are smaller than an elephant and take a mighty beating when these encounters happen.

Sometimes, they will fight unto death, and other times, the hippo will run away.

However, a hippo can get clear of an area using its superior speed before becoming an elephant’s current smackdown opponent of the animal kingdom.

Who Would Win in a Fight a Walrus or an Elephant Seal? [for approval - writer access]

[…] in the animal kingdom, which begs the question: Who would win in a fight between a walrus and an elephant […]