There is something so unsettling about bugs and the likes of it, which instantly makes us grimace. Naturally, the idea of bugs making an appetizing meal is something most of us cannot entertain.

However, our cats don’t seem to share the same sentiments. For them, bugs seem to make a way more scrumptious meal than a dish filled to the brim with cat treats.

Why do cats eat bugs?

Cats eat bugs because they have an instinct of chasing and preying on fast-moving things. The chasing after insects is not because your cat might think of it as a delicacy but is more so because cats are natural-born hunters. 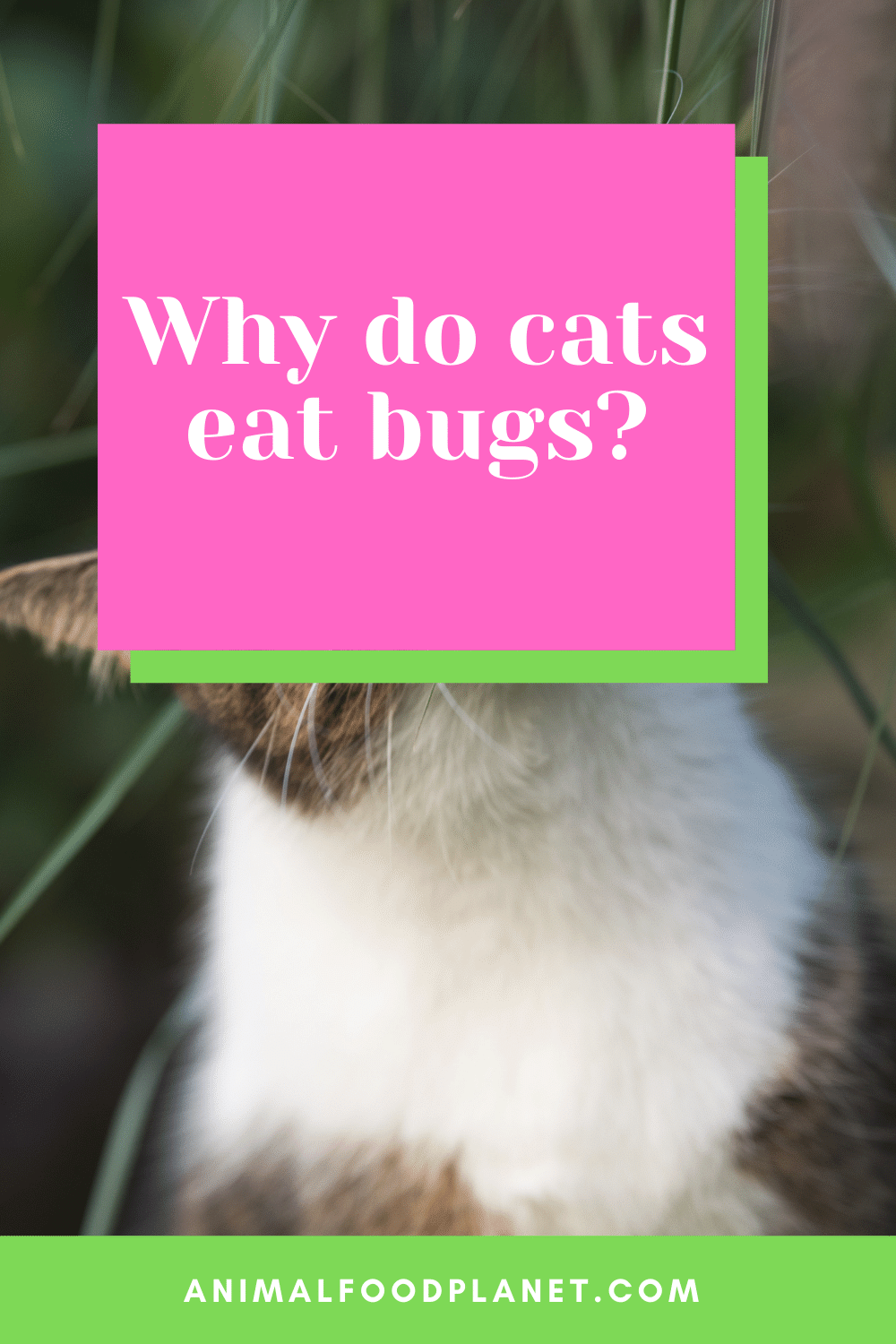 Why Do Cats Eat Bugs?

However, most cat parents worry if the bugs that cats are keen on devouring are harmful or maybe a source of disease for the cat.

Eating bugs is something that most cats do. There can be many reasons why a cat does what it does.

Why do cats eat bugs?

This natural tendency to hunt things is one of the main reasons why cats seem to chase and devour insects. In the wild, cats often seem to fulfill their appetite from small rodents, bugs, insects, and their likes.

When taken in as pets, this instinct just does not die. It remains, causing the cat to chase after bugs and eat them. The instinct is well and working even in the laziest of cats. Hence, you may have observed the laziest of felines running after a fast-flying bug.

The amazing eye-sight of the cat also supplements this and enables it to prey on the smallest of insects and bugs. Chasing, killing, and eating insects are just included in the inborn tendencies of a feline.

Cats aren’t the largest of animals, hence they generally feast on creatures considerably smaller than them so that they are easily able to catch them. This is where the cat’s eyesight comes in handy.

Their eyesight allows them to detect the slightest movement so that the fast-moving insects do not stand a chance.

Generally speaking, if your cats continue to eat bugs despite being given a healthy meal, there is nothing to worry about. It’s just inborn feline tendencies at work. 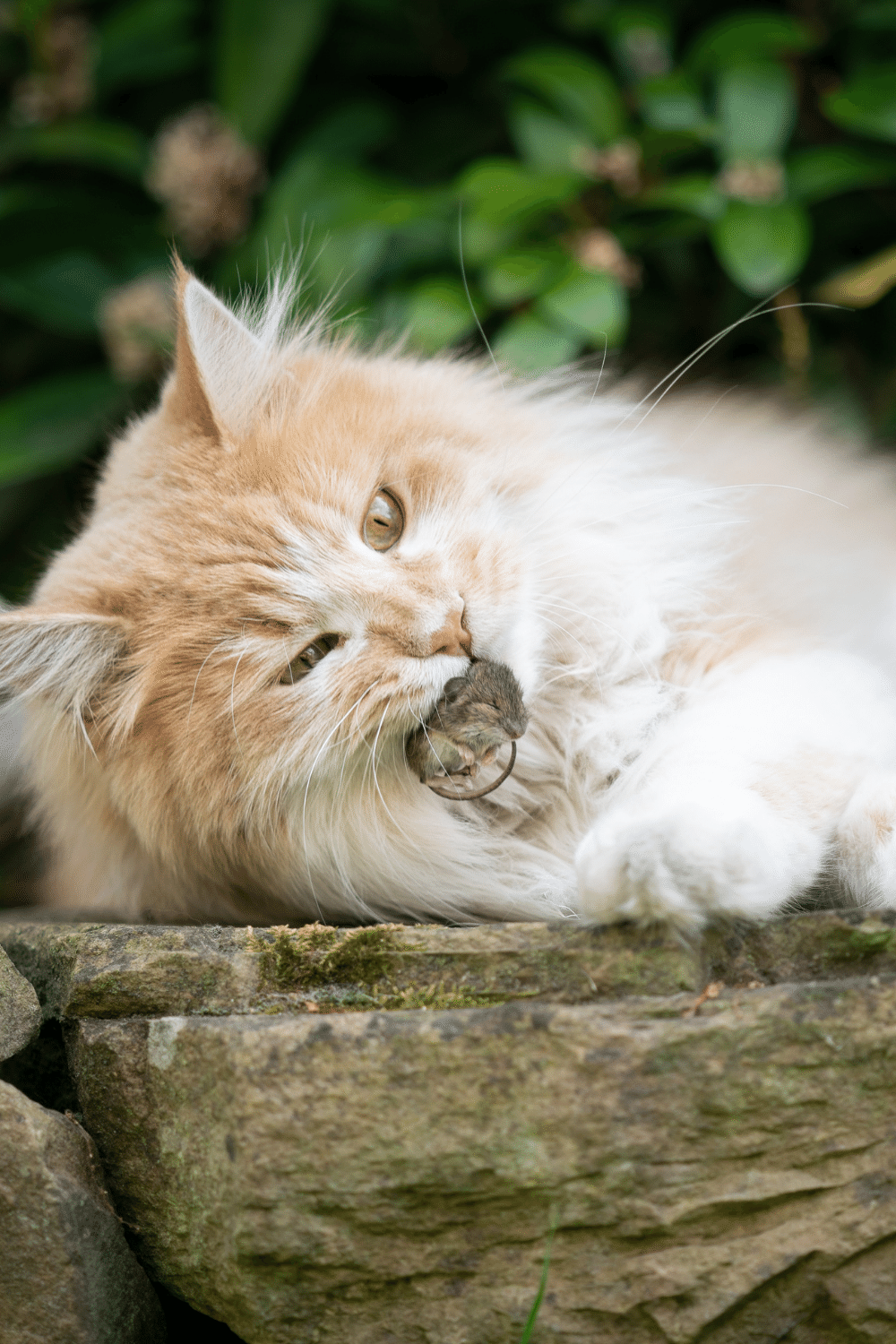 Cats Fulfill Their Appetite From Small Rodents, Bugs, Insects, and Their Likes

2. They are in it for the hunt

Cats generally like chasing small things and pummeling them. When a juicy bug comes its way, preferably something that can fly, the cats are intrigued and their curiosity is piqued.

Chasing after things is a kind of exercise that cats enjoy. The fast-moving fly, which cannot seem to move in one direction only, rather it moves in all dimensions holds all sorts of appeal for the cat.

Cats take it up as a challenge and will do anything in their power to get a grab at the bug. This is why we can find cats in all nooks and crannies of our house.

They chase after them just to have a closer look at the interesting creature with wings. In the process of doing so, many cats think of the bugs as a delicacy and do not miss an opportunity to see how it tastes.

This is the reason why most pet cats, despite being well-fed and well looked after, eat bugs. They are in it for the chase, and many times, when your cat has already had its fill, it will only catch its prey and won’t even bother eating it. 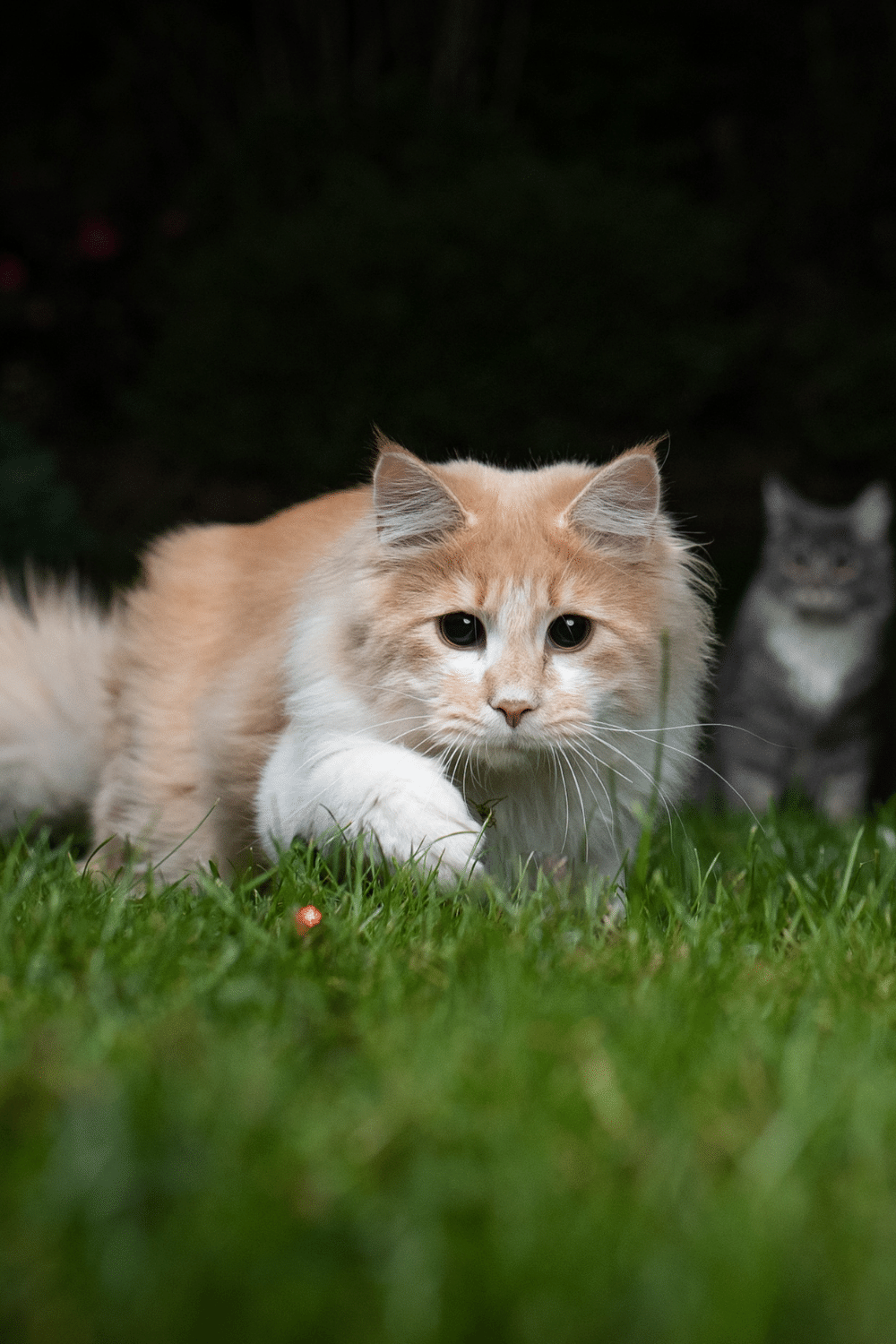 Pet cats are generally well-fed and well looked after, hence chances of cats eating bugs to supplement their diet are not heard of. However, bugs do hold a lot of nutritional value. 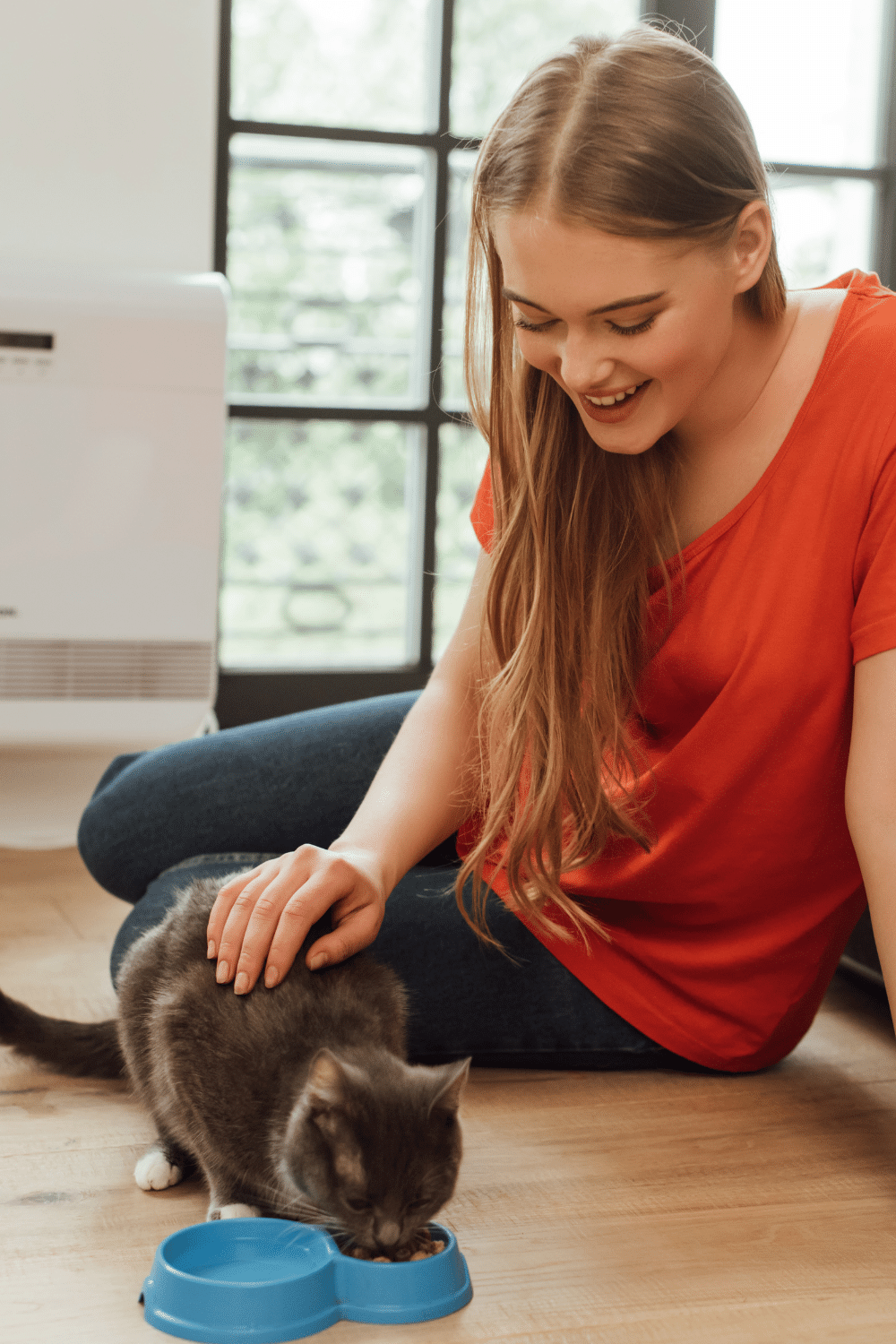 Pet Cats are Generally Well-Fed and Well Looked After

Even though most people think of bugs as gruesome, bugs hold a lot of protein in them. This is particularly attractive for animals who eat bugs to supplement their diet.

Apart from protein, bugs also have some vital minerals which are essential for cat diets.

If your cat is not getting proper nutrition or the proper quantity of minerals, trace minerals, or macronutrients it requires, your cat will shift to an insect-based diet just to fill its tummy.

However, just because you find your cat enjoying eating bugs does not mean it is not properly fed as more often than not, cats eat bugs just for fun.

You do not need to worry about overfeeding your cat because an average cat rarely consumes a large number of bugs to cause it serious harm. 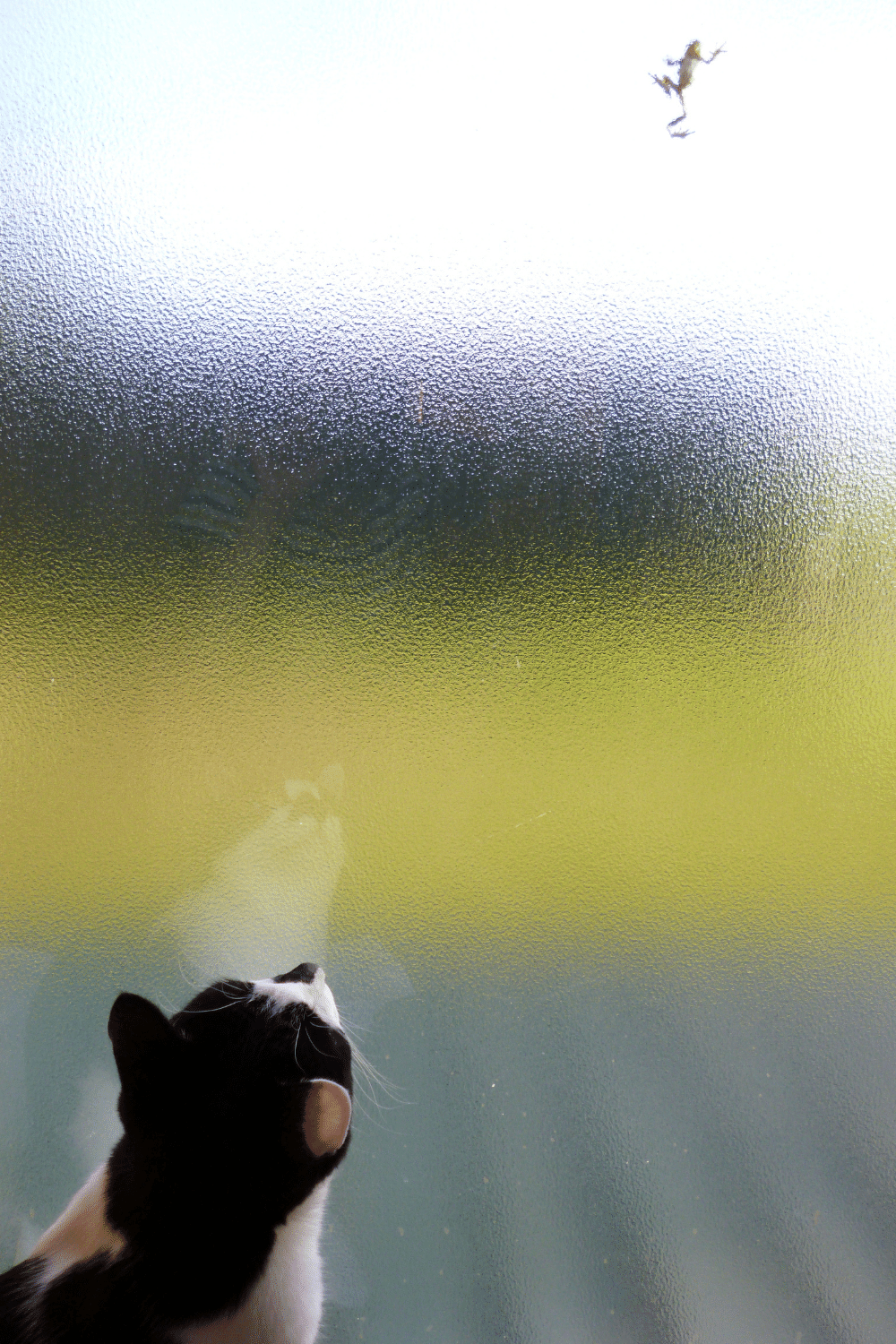 Cat Will Shift to an Insect-Based Diet

Frequently Asked Questions About Why Do Cats Eat Bugs

1. Is eating bugs harmful for your cat?

Most bugs that cats eat are generally harmless and won’t pose a threat to your cat if ingested. However, if your cat suddenly develops adverse reactions, such as allergies or abnormal bowel movements, there is a good chance that the bug was harmful.

Eating insects is a part of the natural hunting tendency of a cat which causes them to chase after bugs. Bugs also provide cats with proteins and minerals. However, they are generally not the main source of nutrition for cats.

3. Can a cat get sick after eating a bug?

Yes, cats can develop adverse reactions after eating a bug that is harmful to their health. Most adverse reactions include vomiting, diarrhea, and drooling. These symptoms generally resolve themselves as the bug is eliminated from the cat’s body.

Conclusion About Why Do Cats Eat Bugs

If your cat enjoys eating bugs, there is generally nothing worrying about it. Cats are natural-born hunters and they like to chase and prey after creatures smaller than them.

Bugs especially hold a lot of appeal for them and pose a challenge for the cats. Cats are never the ones to back off from a challenge and hence chase and devour the small little creatures.

Most of the insects cats eat are not injurious to their health. Furthermore, the digestive system of cats is fairly strong enough to digest the bugs.

Nevertheless, if your cat develops any kind of symptoms, disease, or allergy it is best to contact the vet.