African Dwarf frogs originated and live in the waters of Africa. They are also a favorite component of freshwater aquariums worldwide.

Since they are not fish, African Dwarf frogs require specific care from you to flourish in their aquarium home.

How To Care For African Dwarf Frogs

As amphibians, African Dwar Frogs need to have a water level low enough at the top of the tank for them to surface for air. Place a few taller plants in the tank. These small frogs eat worms, plants, and brine shrimp. Keep their tank at 78 degrees Fahrenheit but not lower than 68 degrees Fahrenheit. 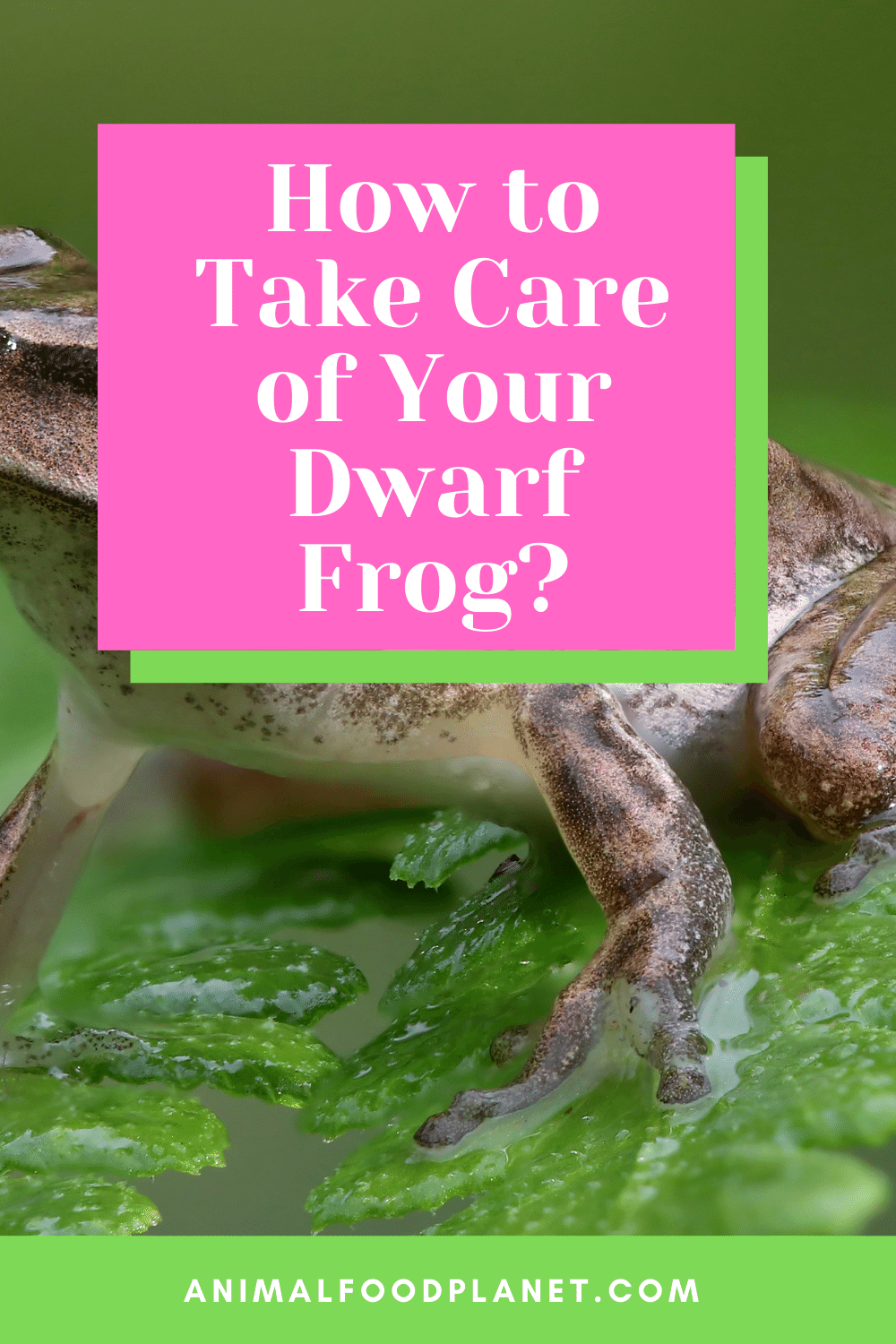 How To Take Care Of Your Dwarf Frog?

What Kind of Tank Environment will your Frogs Need?

These frogs love to move around. Three to five gallons of water per frog is a good rule of thumb.

They like to dwell on the bottom, close to the mud, but also need to reach the top so they can reach air as needed.

Use sand or gravel on the tank’s bottom. Be sure the gravel is not so small that the frogs can swallow it.

Live plants are a plus. The frogs use them for hiding. Plus, frogs like to nibble on them to have a snack while they hide in them. 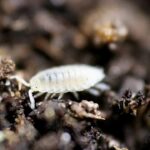 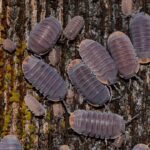 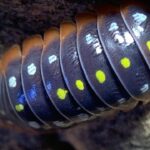 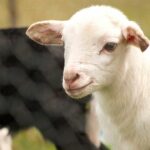 They also like to lay on top of plants both fake and real. Included in these are Java fern, java moss balls, and duckweed.

Other wood and rock decorations serve as hiding spots as well. Light in the tank is required for about ten hours a day.

While the African Dwarf frog is nocturnal, the standard aquarium lights help them stay in their normal time cycle.

The water should be mostly calm. It’s OK to have a light current with a water filter but nothing too strong as it interferes with the frog’s swimming.

They prefer calm overcurrents. Keep the tank clean of any debris or overgrown live plants.

You don’t want your frogs to get trapped and unable to get to the surface for air. The lighting can be set by an automatic timer. 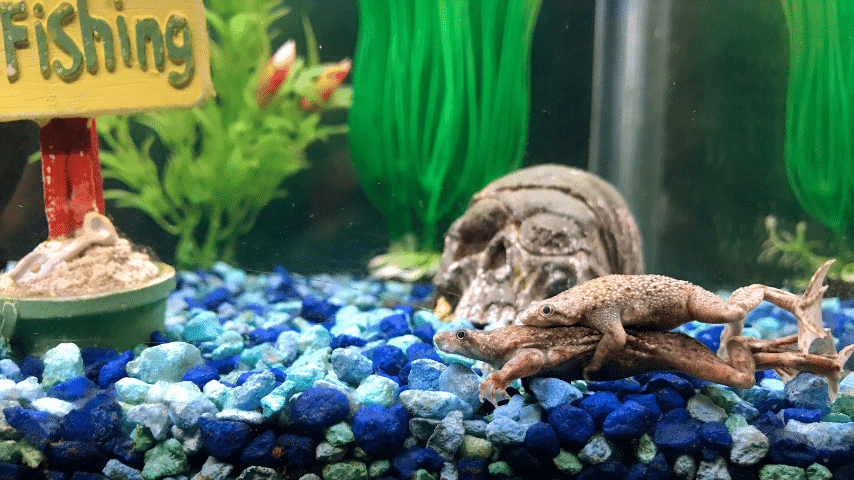 Does the Water Temperature Matter?

Water temperature is important. The frogs prefer and thrive in warmer water with its temperature between 69-77 degrees Fahrenheit.

A timed heater is used to warm the water. A heater with having a 5-watt power per gallon of water works well.

Make sure tank mates have the same basic needs as far as the water temperature as the frogs.

Change the water every month but check the quality of the water each week to head off any issues that could eventually hurt your frogs.

Change the water sooner if necessary. 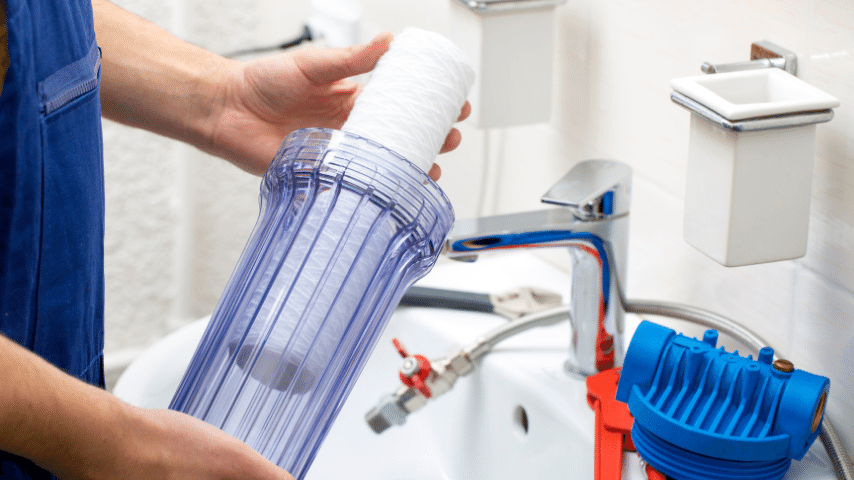 Check The Water Filtration System And Change Water Every Month

What do African Dwarf Frogs Eat?

In a word, everything. Or at least quite a bit. They aren’t picky eaters. Plants are OK with them, but non-plant meals are the preference.

In a natural river or creek, they feed on larvae, small insects, and small fish.

You can still feed them the preferred foods with options such as brine shrimp, tiny worms, and even a small piece of tuna or salmon.

Frozen foods like worms need to be thawed before feeding. You can even feed them earthworms chopped very well.

But these last two have to be in moderation because African Dwarf frogs can gain weight very quickly.

Keep in mind that most owners make the mistake of feeding their frogs up to 10 times what they require.

Frogs will overeat as an ingrained survival mode instinct. But in a safe-contained tank, they can go several days in between meals without harm.

On the other hand, when you do feed, make sure the fastest fish in the tank aren’t stealing the frog’s food.

Placing some of their treats and food in their hiding spot might deter the fish somewhat. 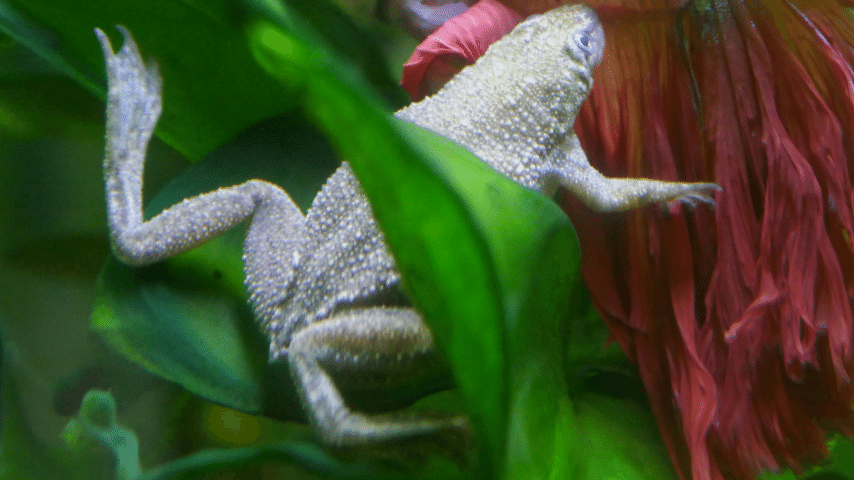 What Health Issues Can your Frog Have?

If your frog’s eyes are red it could mean a bacterial infection. If you see fuzzy patches on the frog’s skin, it’s highly likely to be a fungal infection.

Antibiotics treat both conditions. Always separate a frog with either of these conditions from the other frogs. Both can spread quickly.

For example, a Chytridiomycosis infection will rapidly spread from frog to frog. If the frog is acting differently and bloated,

it could very well is the first sign of Dropsy. This illness left untreated is fatal, so see a veterinarian right away.

Some health dangers do not arrive as illnesses. Your healthy frog-like any frog jumps. A mesh cover over the tank will keep a frog from an untimely death.

You won’t have to worry that your frog is dying on your floor when you aren’t home. Keep space between the water and tank cover so your frog can still surface for air. 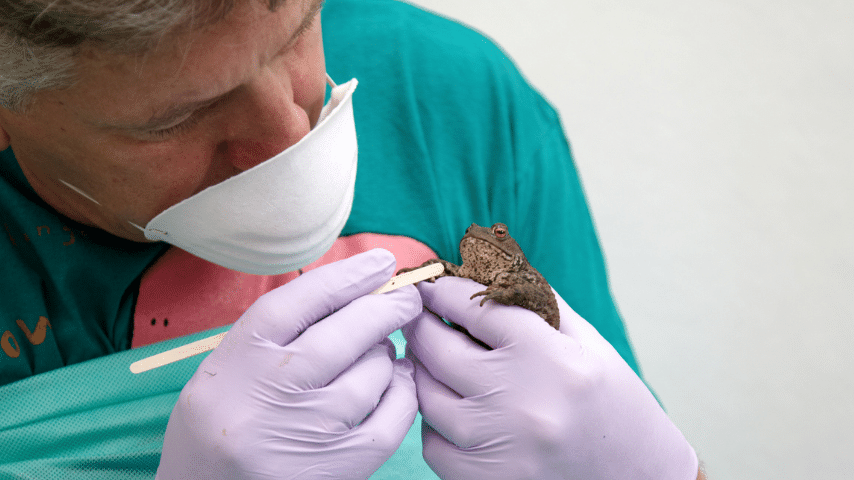 Frog Illness Left Untreated Is Fatal, So See A Veterinarian Right Away

Frequently Asked Questions About How to Take Care of Your Dwarf Frog?

How Long Can the African Dwarf Frog Stay Out of the Tank?

The African Dwarf frog’s skin needs to remain hydrated. When out of the water, they lose this hydration very rapidly. So even though they can breathe air, being out of the tank too long is fatal. Some new owners with their first frogs try to hold them, keeping them in the air too long. The frogs can be out of the tank a maximum of 15 minutes before they dehydrate and die.

Do They Shed Their Skin?

The AFD frog does shed its skin several times a month. He will appear to have a whitish color to his skin before the shed. Mainly, it’s just a normal process because of growth. You might see him eating the shredded skin. No need to worry, they do that sometimes and it just gives him extra nutrients.

African Dwarf Frogs do benefit from other frogs in the tank being social. They also co-exist with freshwater fish, although they seem happier and more active with other frogs to explore and interact with. Their care isn’t difficult, making them one of the best freshwater tank additions.