Frogs are green. At least, that’s how we picture them, don’t we?

You may be surprised that frogs can actually be any color depending on what the frog needs its color for.

What Colors Frogs Are

Most frogs are different shades of green, brown, or grey because these are the colors of their natural surroundings and they are well-camouflaged from predators. Some are brightly colored, with shades ranging from vibrant yellow to dark blue. These colors specifically warn predators that the frogs are highly poisonous.

The natural habitat of frogs is usually near water, or on the ground of damp places. To be camouflaged in these areas, most frogs are different shades of green, brown, and grey.

Some are even as dark as black, but most do actually have dark spots or stripes.

When a frog is traumatized or excited, it may even turn pale, but this is not a usual change in color and makes them noticeable, rather than hiding them.

We may talk about ‘common’ frogs, but this is only one of a whole number of frogs that are non-toxic and found all around where there is water. 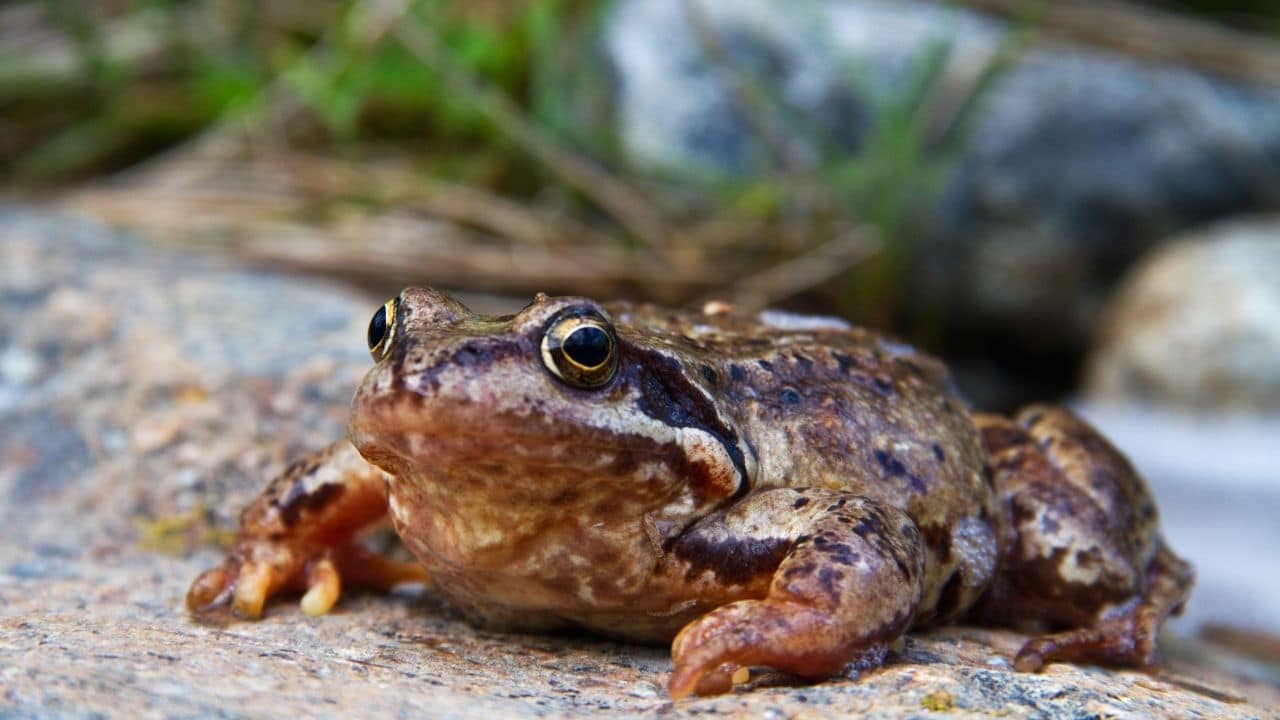 The common frog is the one you are most likely to run across in summer, even in your garden. You can see them in various ranges of colors,  from brown to green.

There may even be traces of red or yellow on the skin. There are black bands running down the legs. 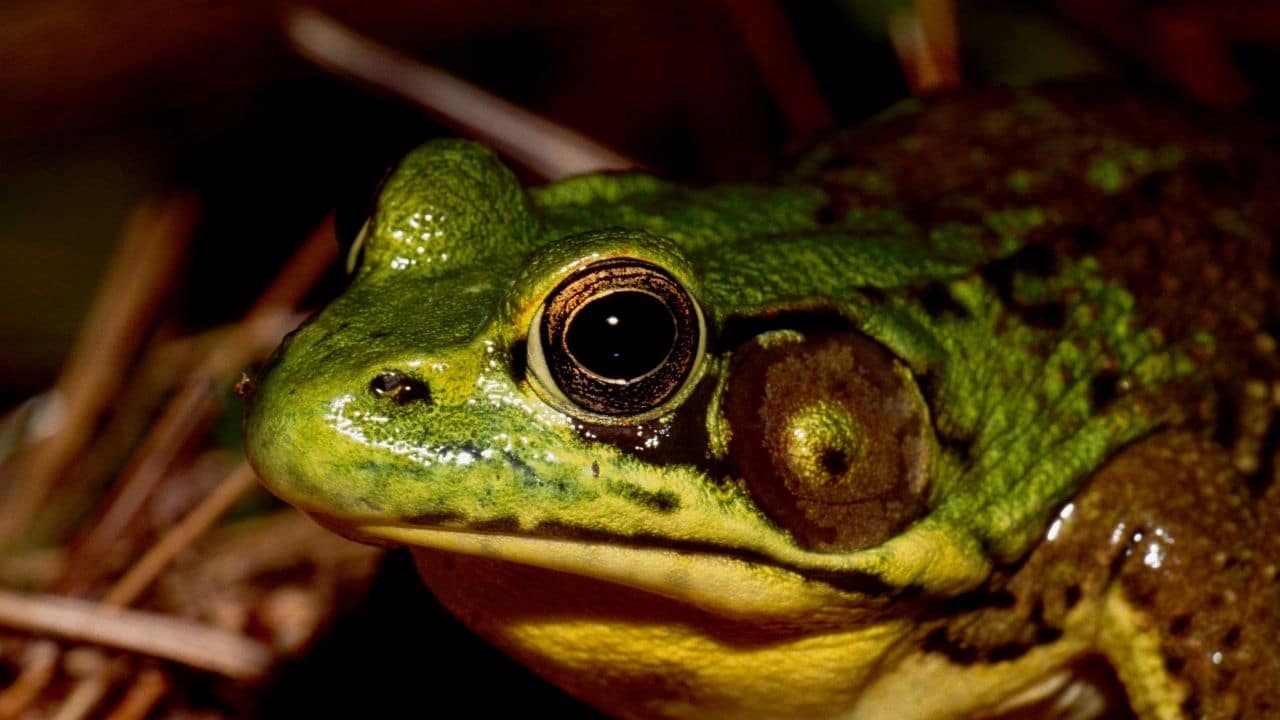 The American Bullfrog, despite its name, doesn’t only live in America, but in South America, Asia, and even Europe. It is quite a big frog and its color can be any shade of brown to green.

There are dark marks on its back. 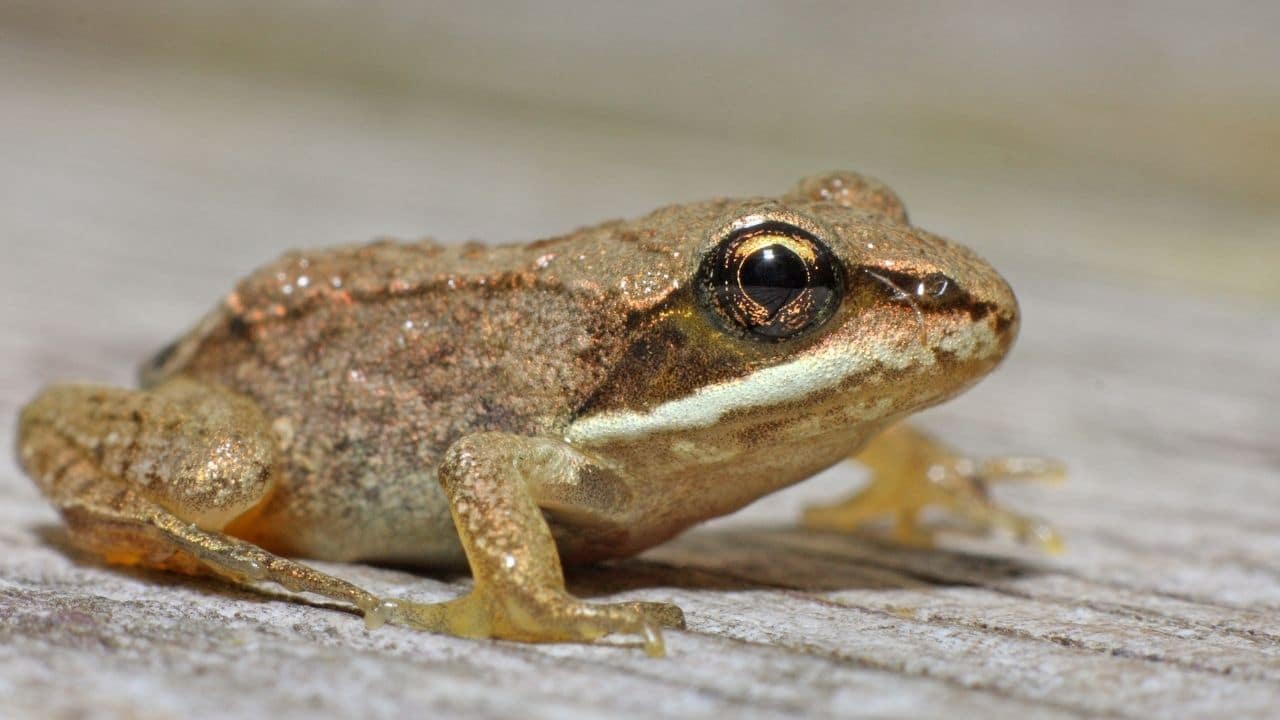 The Wood Frog, as its name tells us, lives in woods and forests, so it needs to blend in with that environment. It can be any shade of brown, red, green, or gray, but its colors are always muted.

It has a distinctive black line (or ‘mask’) across its eyes. 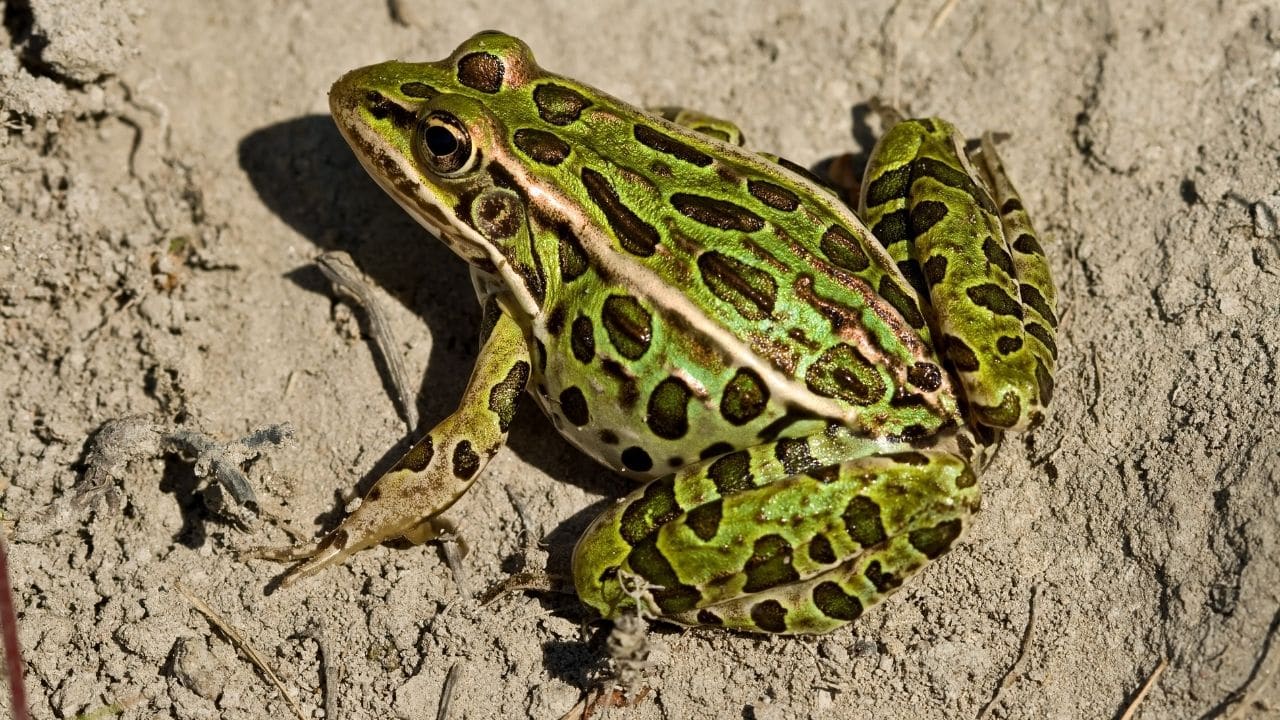 The Northern Leopard frog is so named because of the numerous black, oval spots on its body.

Under the spots, the frog’s body is bright green or brown. The spots often have a slightly yellow outline.

A frog’s color is its most important means of survival. Although frogs appear to be one shade, there is a pigment in their skins that changes their color to match their backgrounds, so they are not visible to their predators.

There are about 220 species of poisonous frogs that are brightly colored, which is a warning to predators that they should be avoided.

There are frogs that are not green, brown, or gray but are brightly colored and stand out from their environments. They do not live in trees with bright flowers, which may match their colors.

However, the colors are still a form of survival, because these frogs are poisonous and their bodies are a warning to their predators.

More recent research has begun to understand that the bright colors of these frogs actually help to camouflage them. They need this because there are some young snakes and birds who can’t recognize the poison warning and so the frogs are in danger of being caught.

From a distance, the colors actually help to camouflage the frogs.

Clever Use of Colors

There are some frogs whose color is used even more efficiently as a form of survival.

Some poisonous frogs seem to be dark, but they have parches of color under their legs that ‘flash’ as they move and confuse predators.

Then, the Chilean Four-eyed frog has two bright spots on its rear that look like eyes, which will distract the predators.

There is one frog that seems to have everything on its side: it is not only the color of the Solomon Island Leaf frog that helps it to be camouflaged, but its shape also resembles the shape of the leaves in the tree it inhabits

There are about 220 species of poisonous frogs that are brightly colored.

They are mostly tree frogs and they are a range through bright yellow, orange, blue, and even purple. 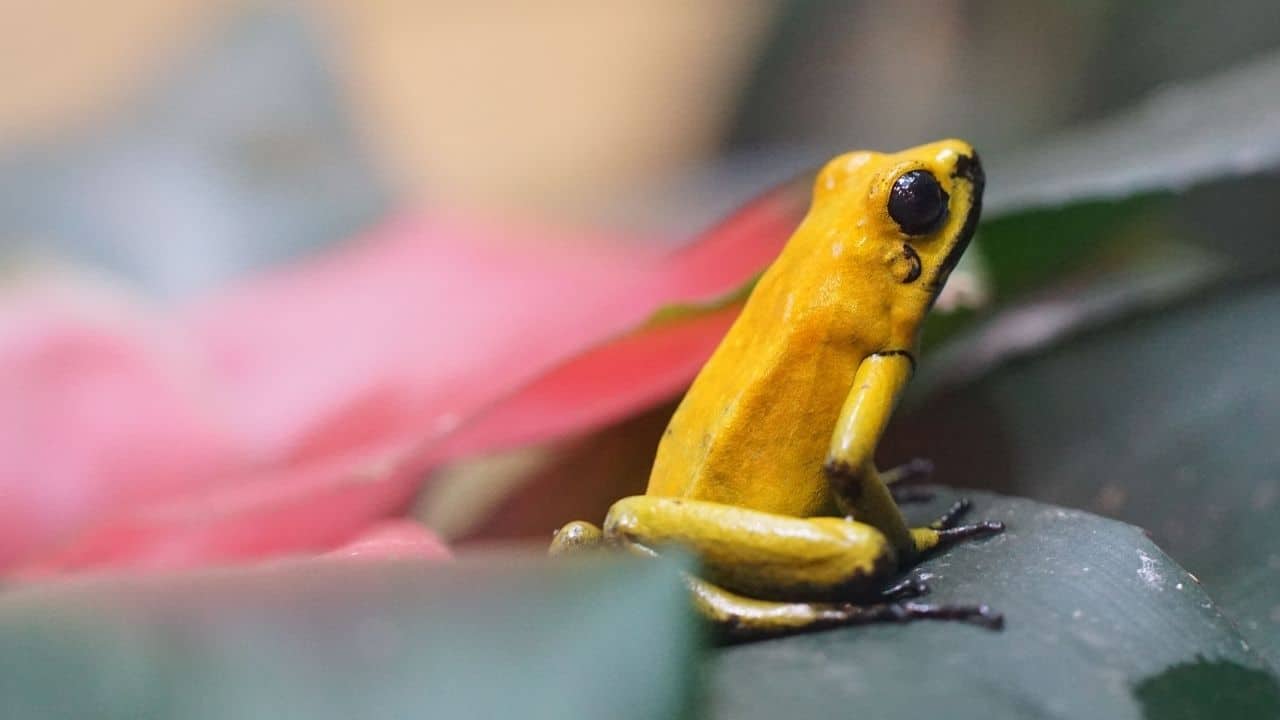 The Golden Poison Dart frog is bright yellow, with greenish legs and some black splotches and greenish legs. Its poison is derived from its diet and is extremely toxic.

In fact, this little frog may be the most poisonous living thing you’ll find on this planet. 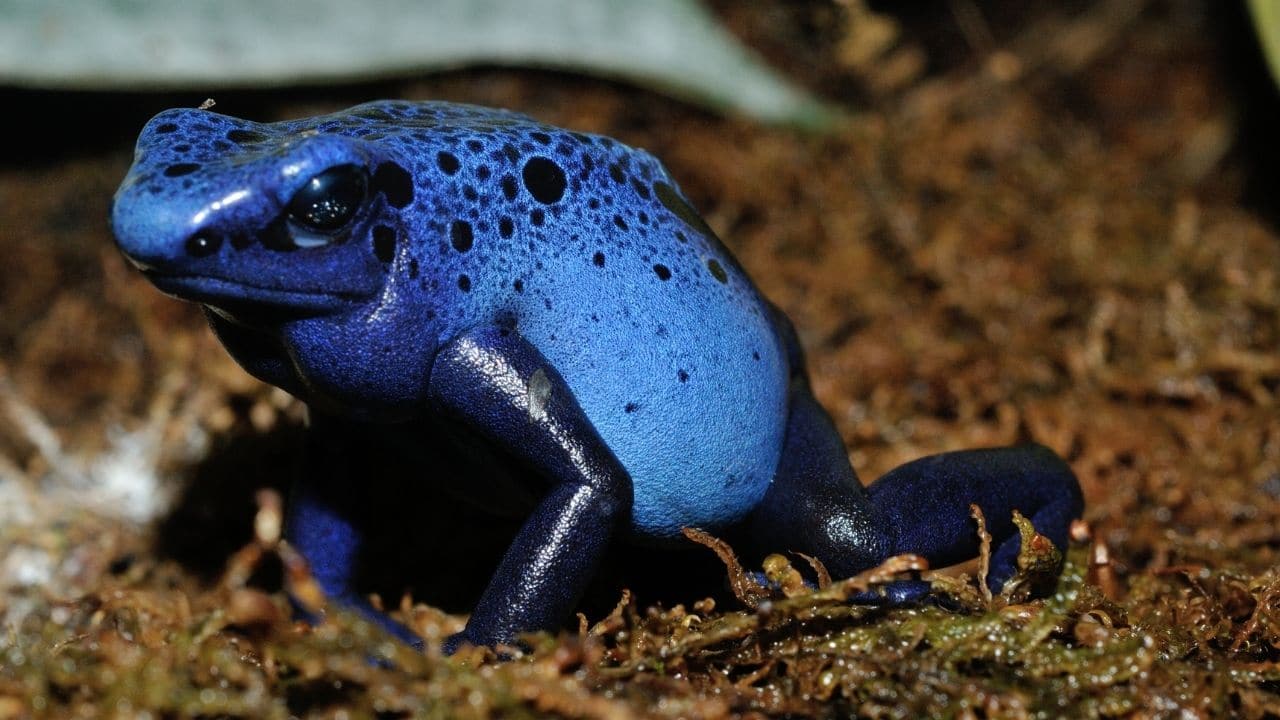 The Blue Poison Dart frog is bright blue, with black dots ranging from quite large to really tiny on its body. Its legs are bright blue.

Their skin is not only noticeable but contains a poison that can paralyze and even kill. Like the other poison dart frogs, the poison comes from the poisonous ants the frog eats.

The Black-leg Poison dart frog is similar in color to the Golden Poison Dart frog, but its yellow body is not as bright.

The top of the legs is black and it may have a black throat. The skin of this frog is poisonous. 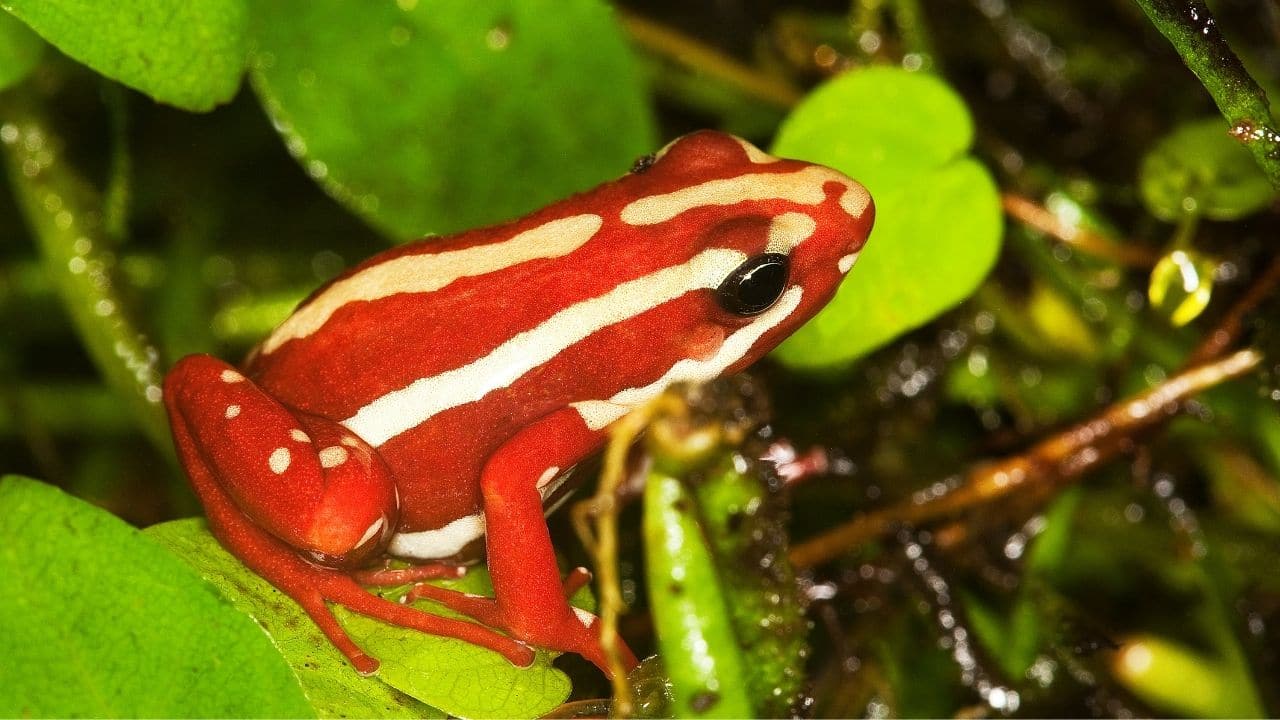 The Phantasmal Poison frog is basically red-brown, with yellow stripes.

The stripes’ pattern is individualized to each frog. This frog’s poison is dangerous to animals and humans.

Frequently Asked Questions about What Colors Frogs Are

Most frogs can be any shade of green, brown, or grey. They have a special pigment in their skin that can change to fit in with their background so that they are camouflaged and protected from predators.

What is the most poisonous frog?

All the Dart Frogs have poisonous skins. The Golden Poisonous Dart frog is understood to be the most toxic of these frogs.

If you are asked to imagine a frog, you’ll most probably think of one that is green, perhaps with some dark patches. Frogs are not all the same color, though.

In fact, most frogs can change color. There are also many species of tiny, poisonous dart frogs that have extremely bright skins.

In addition to green, they may be blue, yellow, red, and even orange.

[…] So, they still need to eat something in order to receive the necessary nutrients to grow into full-sized frogs. […]