Skip to Content
Known by many just for their croaking and peeping early in the mornings, frogs are mysterious and elusive creatures. Some would describe them as grotesque, others as stunning; with their bulging eyes, slimy skin, and variety of colors. They inhabit almost every nation of the world, yet despite that their lifestyle and diet is still a mystery to many.

This article will cover in detail several topics, notably the dietary habits of frogs. The frog lifestyle, different frog species, seasonal trends of frogs, and frogs as pets will also be covered. 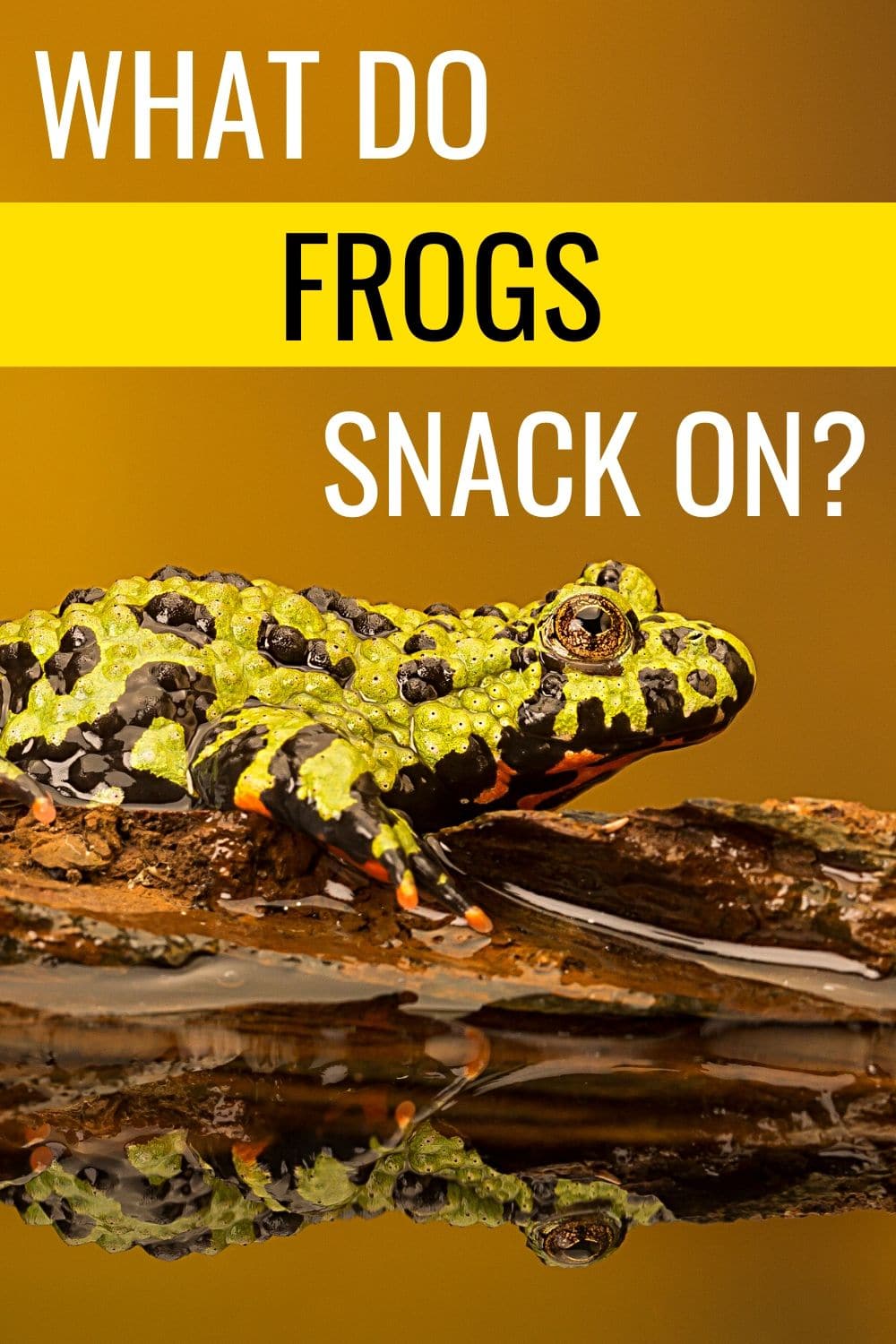 What Do Frogs Eat?

Frogs are naturally carnivorous creatures, meaning that they only eat animals and forego all plants. While this may sound like an unhealthy diet to us (which for humans it is), frogs’ digestives systems are wired mostly for the digestion of animal products and not plants. Only adult, or full-grown, frogs are true carnivores. Tadpoles and adolescent frogs include a wider variety of foods in their diet, which will be covered in detail below.

So what do adult frogs eat exactly?

Now that it has been established that adult frogs are almost exclusively carnivores, it is time to take a look at what exactly this carnivorous diet consists of. You might think that the frog diet, being only animal products, is very boring. Quite to the contrary, frogs eat a huge variety of animals. While it may vary slightly depending on species, generally a hungry frog will down anything from crunchy, live bugs, spiders, and worms.

Medium frogs love a tasty snack of small fish, grasshoppers, and larger earthworms to keep them fueled for a busy day of croaking.

Ginormous, mammoth-sized frogs will even gobble up other small frogs, small snakes, mice, baby turtles, and small rats. While it is a little disturbing to think that frogs are sometimes cannibals, it isn’t entirely unheard of in the animal kingdom. For example, some spiders eat other spiders! Cannibalism isn’t the go-to dietary lifestyle for frogs, usually only the ultra-hungry frogs go for other frogs.

Keep your pet mice and little rats away from a pet frog if you’re thinking of getting one, an encounter could be deadly!

Omnivorous Tadpoles: What You Want to Know

So remember that little bit earlier about how only adult frogs are usually exclusively carnivorous? Growing tadpoles have a whole different set of nutritional needs.

Before it even hatches, Mr. Tadpole begins his rather odd diet by eating his own yolk sac. Some would call it self-cannibalism, though technically the sac isn’t really flesh meat at all, so it is a little bit further off than that. The eating of the yolk sac is similar to how many animals eat their placentas post-childbirth.

After hatching, the tadpole begins to explore the world around, but not too eagerly. Usually, the average mildly adventurous tadpole will still stick to the main pond or swamp area in which it was born, feeding off of dead algae and other micro plants found in the water. Moss is also a delectable treat for the growing tadpole.

As the tadpole begins to mature a little bit, he may begin to dine on larvae and mosquitoes. Tadpoles never eat full-fledged meaty animal/insects; their digestive system is not equipped to handle it. Once the tadpole begins to sprout back legs and assume a more frog-like shape, he will quickly begin to show interest in a carnivorous diet.

Bottom Line: Adult frogs need a carnivorous diet; developing tadpoles are omnivores and may need very little to a lot of protein depending upon the stage of development.

Seasonal Diet of Frogs: What You Should Know

The following sections will cover the habits, including dietary, of frogs during the various seasons. How that applies to pet frogs will be covered as well.

You may have noticed that the early morning croaking that greeted you from the nearby pond disappears in the winter. So where did the frogs go? Contrary to what many think, frogs do not migrate like birds and other similar warm-blooded, sensible creatures. Like bears, frogs hibernate!

How Do Frogs Hibernate?

Hibernation is the process of lowering body temperature, heart rate, and metabolism to the point where the hibernating animal requires minimal energy and nourishment to survive. Bears and other animals such as jumping mice and snakes hibernate as well.

The hibernation process is fascinating. During harsh winters, it is much too cold for frogs to go out and forage for food or frolic about in their usual swimming spots; they would freeze and die. So what’s a frog to do?

The frog goes underneath the water, preferably to the bottom of lakes or ponds. While the more sensible thing to do to us may be to seek out warm spots, frogs would suffocate in the thick mud or mossy areas. Because frogs breathe through their skin, they need oxygen-rich water to effectively hibernate in, hence why the bottom of bodies of water is the choice hibernation spot.

When spring-time rolls around, the frogs come out in droves to fill up on food and seek mates. With an alpha-like personality, males will typically be ahead of the females and wait for them to arrive at their pond to mate.

Throughout summer many frogs will still mate. The loud croaking you often hear in the air is the male frog wooing his female maiden frog to come mate with him. The eating habits of frogs in the summer remain steady, with some species eating constantly and others only eating every other day.

The spring and summer serenading has tapered off and now the frogs are getting ready for winter all over again. That means stuffing their faces 24/7 so they have enough fuel to make it through the winter.

Frogs in captivity may need a little less to eat during the winter months as well, depending on how strongly their genes “signal” to them to feast during the months prior.

The above dietary habits account for frogs in the wild. Pawing through ponds for dead sea vegetables and algae or catching mosquitos isn’t the most practical solution for most frog owners, but no worries, there are lots of ways to nourish your pet tadpole.

When it comes to tadpoles, think along the lines of what you would feed a baby. The following list of foods is acceptable for pet tadpoles

Just like frogs in the wild, adult pet frogs thrive on a carnivorous diet. There is a danger, as with many other types of pets, of giving your poor pet frog a repetitive diet lacking in a variety of nutrients. In other words, it is very important that the food your pet frog eats mimics what he would eat in his natural habitat.

The exact diet for your small pet frog will depend on his species.

Here is a sample diet for the African Dwarf Frog:

While especially tiny pet frogs may enjoy an insect snack, most insects, even crickets (unless they are very small), are too large to be safely eaten.

With smooth green skin and big yellow and black eyes, Green Tree Frogs are arguably one of the cutest frog breeds available. Small LIVE crickets make up the staple part of their diet; supplement with fruit flies, house moths, and chopped worms if available.

Tip: Crickets too expensive? Try raising your own to save money! Just remember that it is important that they be given to the frog alive. That may seem cruel to the cricket, but such is the way of the animal kingdom.

The most famous pet frog belonging to the large frog category is the Bullfrog. Bullfrogs aren’t known for being very friendly creatures, with voracious appetites, aggressive predatory personalities, and a droopy face that suggests a glowering disposition (if frogs could even have dispositions, we’ll let the pet owners argue that one out).

Despite their apparent off-putting characteristics, something about the huge size and the grumpy Garfield-cat-like appearance of the bullfrog attracts a certain kind of pet owner. Knowing what to feed your pet bullfrog is essential if you want to ensure they have a long and happy life in their tanks.

Thankfully, bullfrogs are the opposite of picky. In fact, your pet bullfrog will stuff any and everything that is alive into its mouth, including any pet mice. Here is a comprehensive list of the best foods to supply Mr. Bullfrog with:

Frogs are such fascinating creatures, from their dietary habits to their mating to their hibernation, that whole books can and have been written about them. The following will cover common species of frogs and various tips to maximize your safety around frogs.

How many species of frogs are there exactly?

Biologists aren’t exactly certain, but they estimate that there are anywhere from 4,500 to 5,000 different species of frogs all over the world, depending upon classification. Frogs live anywhere and everywhere except for the Antarctica. Yes, even in the deepest parts of Russia frogs may be found!

If you scoured the nature books at your local library of amphibians, chances are you’ve seen the Poison Dart Frog. Poison Dart Frogs, as their ominous name suggests, are known for being, well, very poisonous.

Inhabitants of thick rainforests and dense jungles, they have few predators. Just touching their skin can poison you and cause death within a few minutes, making them one of the most poisonous animals on the planet.

The Poison Dart Frog’s bright rainbow of colors warns any animal with even a lick of sense to stay far away. The reason behind the Poison Dart Frog’s toxicity lies mainly in its diverse diet of ants, mites, termites, and centipedes, and tiny beetles, which are used by the frog’s glands to create poisonous chemicals scaring predators off.

Their poisons may have medicinal use, however. Scientists are investigating using different alkaloids from the Poison Dart Frog and have found substances that, in extremely carefully extracted doses, may mimic morphine in their pain-relieving effects.

What do Green Tree frogs eat?

Green Tree frogs are one of the most popular pet frogs due to their harmless, even shy, nature and beautiful color. Smaller varieties, as mentioned above, will eat the typical insect diet, while larger Green Tree Frogs will enjoy a small rodent or even a bat.

Where do Wood Frogs live?

Found mostly in the wild and not as pets, wood frogs inhabit cold areas like Alaska and parts of Canada. Their choice of living is a biologically smart one: they can withstand temperatures well below freezing. As with most other carnivorous frogs, their diet consists of native insects and available vertebrates.

Are there any handsome frogs?

A common frog in North America, the Pickerel, is a handsome frog, as far as handsome goes with frogs, sporting square to rectangular spots arranged in neat, orderly columns along the spiny ridges of its back.

How to deal with frogs?