What Do Beavers Eat?

Considering an adult beaver can weigh about 40 pounds and be over three feet in length, they have big appetites to match their large bodies. As one of the largest rodents in North America, you may be wondering what beavers can possibly eat. Unlike other rodents, such as rats and mice, beavers have a pretty specific diet and don’t steal garbage from humans. 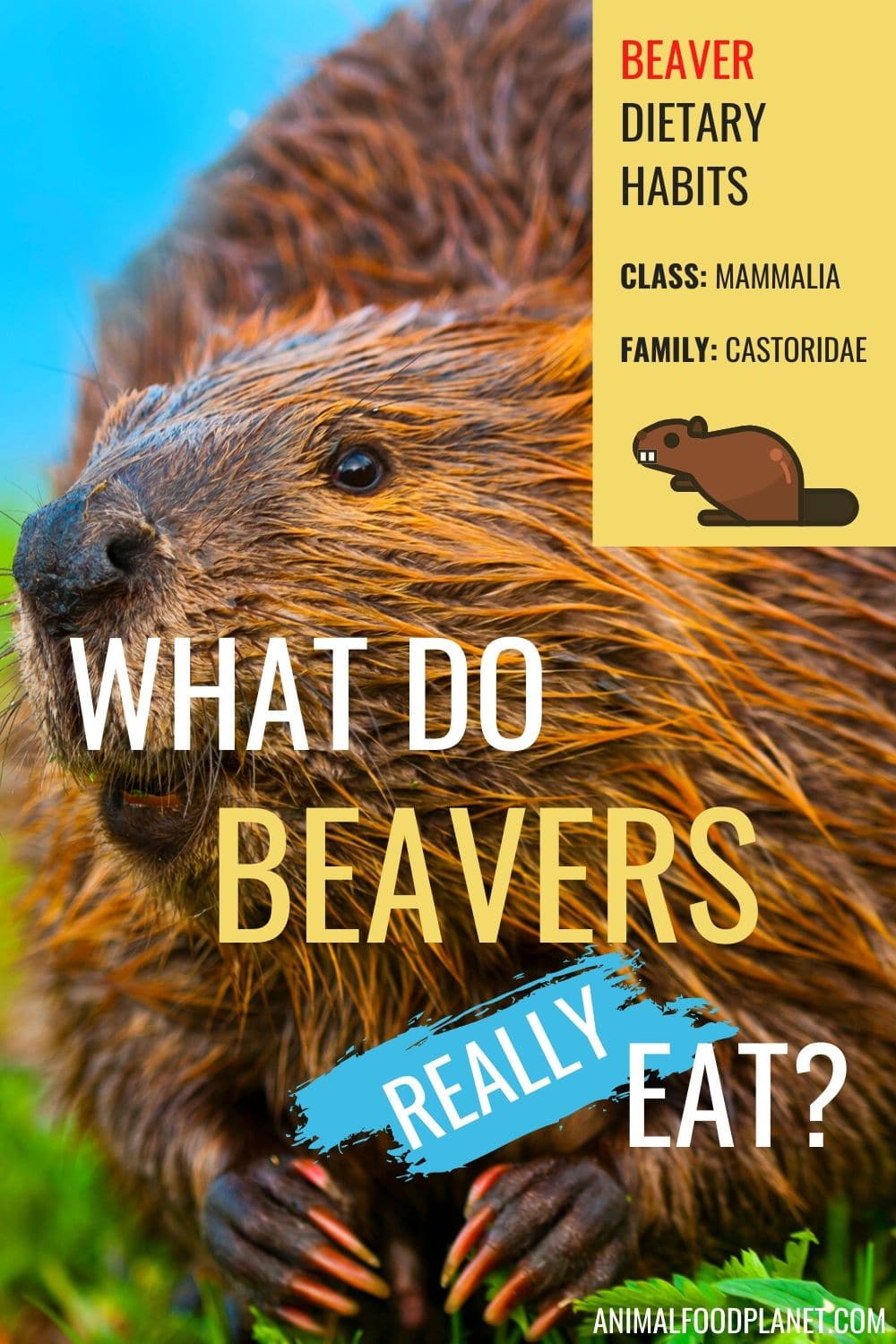 So, what do beavers eat?

While researching the diet of beavers, I came across some interesting facts that I hope you’ll stick around to read.

If you have ever had the misfortune of getting a piece of sawdust in your mouth, you know that it doesn’t taste good. In fact, wood is completely indigestible to humans. You may wonder then how beavers can possibly survive by eating trees.

They don’t eat the trees they cut down. They only eat certain parts of them. Specifically, beavers eat the cambium of the tree. That’s the soft inner bark underneath the rough outer bark.

That still doesn’t sound good, I know. But beavers are pretty amazing.

In addition to being adorable and industrious, beavers have evolved a unique ability among mammals. They can actually digest cellulose, which is an insoluble substance in plants and trees. So, if you try to take a bite out of an aspen tree, you’re going to get really sick. For a beaver, however, that’s a delicious and nutritious dinner.

Even though beavers have evolved to digest cellulose, it doesn’t mean that it’s an easy task. They are only able to digest about 30% of the cellulose in their diet. That means they must eat quite a bit of other plant matter to maintain their body weight and energy levels.

Another way beavers keep well fed is by re-ingesting their own pellets. It may sound gross to humans, but eating their own droppings is an efficient way to absorb as much nutrition from every morsel as possible.

How do beavers eat trees?

After a beaver cuts down a tree, they use their long, sharp incisors to peel the bark away. They eat the inner bark, leaves, and twigs, but use the rest of the tree to build dams and their homes.

Beavers have even been known to cut down their least favorite trees to make room for their favorite food sources to grow. They favor trees such as aspens and willows.

But nothing goes to waste.

Even if the beavers don’t eat any of the cambium, they use every part of the tree they cut down for building. Any branches, stumps, or bits leftover after the beaver is done eating and building will compost back into the ground and feed the next generation of trees, shrubs, and grasses.

What are beavers’ favorite trees?

Just as humans have favorite foods, so do beavers. They are opportunistic foragers, but they will travel a little farther if they know their favorite foods are there.

Some favorite foods of the American beaver include the alder, birch, aspen, apple, cottonwood, and poplar. They also love willow trees and cherry trees.

As you might imagine, this can cause problems for nearby humans and their orchards or private forests. There are lots of non-lethal ways to deter beavers from eating your trees though. Erecting fencing around the base of favored trees is a cheap and humane way to keep beavers from chomping on your orchards.

Deciduous trees are their favorite food. They don’t care for coniferous trees such as pines and hemlocks. Many people plant elderberry and twinberry trees along their properties to deter beavers from entering because beavers don’t like those either.

Some other types of trees that beavers dislike include Sitka spruce, cascara, ninebark, and osoberry.

However, if they are running out of other food sources, beavers will snack on almost all kinds of plants, including the trees listed above.

What do beavers eat besides wood?

Beavers eat many types of plant matter. They eat the inner bark of certain deciduous trees, the leaves and twigs of trees, and they also eat tubers, greens, and sometimes human crops such as corn or many types of beans. They are especially fond of soft, tender buds of a huge variety of wetland plants.

Aside from the bark, leaves, and tender new-growth branches of trees, beavers enjoy eating aquatic plants. They prefer plants such as cattails and water lilies, but will eat almost any other water plants they can find. Aquatic plants are fairly easy to pull up by their roots, too, so you can often see beavers swimming back home with water plants in tow.

Many types of shrubs and grasses grow around the wetlands. Beavers will eat soft vegetation such as most grasses, ferns, and watercress. They also love clover and apples.

If the season is right, beavers can fill up on tule roots, blackberry vines, scrub plants, pondweed, and even wild fennel. Rhizomes are easy to dig up in marshy areas and are an excellent source of nutrition.

There have been many accounts of beavers eating mushrooms, too. In fact, there aren’t many plants that a beaver won’t eat.

How can beavers eat aquatic plants?

It’s really cool to watch a beaver swim underwater, collecting the plants he finds down there. And they can stay under for such a long time that it looks like they don’t need oxygen at all.

But beavers cannot breathe underwater. They are only holding their breath while they forage for aquatic plants and materials to build their dams and lodges with. Beavers must surface within 15 minutes to get another breath before diving again.

With transparent membranes over their eyes, beavers can see very well under the water. They also have nostrils and ears that can completely close. These traits help them seek food at the bottom of ponds, lakes, and streams.

They don’t usually eat plants underwater, however. They prefer to bring their meals back home. This is especially true if they have babies waiting in the lodge for their supper.

Beavers like apples and other fruits, but they can be hard to come by unless it’s the right season. While they have been seen eating blackberry canes and other wetland-friendly berry plants, they have an easier time finding other types of plant-based foods.

When food is abundant, they have a wider range of foods to choose from. It’s during these times that beavers will eat fruits and berries. In leaner times, such as winter, they’ll eat whatever they can find or simply dip into their hidden stash.

Does location affect what beavers eat?

It sure does! While beavers live around water, such as lakes, ponds, rivers, marshes, and streams, the variety of available plants varies greatly from state-to-state. It varies even more from America to Europe.

American beavers, for example, have evolved to eat plants native to America. But there is also the Eurasian beaver who has evolved to eat the plants available in Europe.

Even though the two species of beavers have evolved to eat the trees and plants of their native lands, they could still find enough to eat if they were to visit their foreign cousins. They can’t however, intermingle with each other. Their genetics are too different.

The type of water each beaver lives near affects the type of food available, too. Deeper lake water, for example, will have different species of aquatic plants than a shallow pond or stream.

What do baby beavers eat?

This is a sweet video of a family of beavers inside their lodge. You can see the babies are well cared for by the adults so they don’t have to go out into the dangerous world to find food on their own.

Beavers often store food in their lodges. This helps them make it through the winter and through leaner times when food is hard to find. However, food is not kept in the sleeping and living areas.

Adult beavers collect twigs, bark, and other favored food items during times of abundant food. They bring them back to their lodge and store them in a special location called a food cache.

This video shows a large beaver lodge with an impressive food cache.

Not every beaver lodge will have a food cache, however. In areas that typically have milder winters or a constant supply of food, a beaver family may decide not to build a cache at all.

When do beavers eat?

Late afternoon is the best time to spot beavers poking their heads out of the water to start their day. Between afternoon and dawn, they will be busily collecting food, building, and stopping for snacks.

Inside the lodge, beavers will eat whenever they feel like it because they are safe. If the lodge has a food cache, they can take from the stash. If not, they can quickly dip into the water to grab some water plants, then head right back into the lodge without ever having to come up for air.

What happens when beavers run out of plants to eat?

If food has been scarce for a long time, beavers may choose to move to a better location. This usually takes a couple of years to happen.

Because beavers migrate and move around, the ecosystem is in a constant state of flux. But this is a good thing. Abandoned beaver dams and lodges help change the landscape, creating new homes for different animals and plants.

The change in location gives the old place time to regenerate and regrow, too. When the new beaver location runs out of food or is no longer suitable, the beavers may just head back to their original location to start the process over again.

This is a common misconception since beavers make dams that create ponds and wetlands. But, no, beavers do not eat fish or meat of any type. They are herbivores, eating only plant matter.

Many people believe beavers eat fish because they’ve been seen chasing fish, but this is a playful behavior, not a fishing or hunting behavior. Occasionally, a curious beaver may nibble on a dead fish just to see if it is worth eating, but they quickly lose interest.

Another reason people think beavers eat fish is because they are easily confused with otters. If you happen to see a water-loving mammal happily munching on fish, it’s probably an otter!

No, beavers do not eat animals or insects. They are herbivores. That means they only eat plant matter, never meat of any kind.

Why do beavers build dams?

Beavers build dams to create an ideal environment for themselves and their family unit. They are considered a “keystone” species, which means they are integral to the health and balance in their ecosystem.

When beavers build dams, they create wetlands. These wetlands then produce the perfect foods for beavers. They also become home to a variety of wetland animals.