Arctic foxes (Vulpes lagopus), also called white foxes or polar foxes, eat just about anything they come across. Since they live in such a barren place as the Arctic, they cannot be finicky.

As such, if you’re way too interested to know what these adorable arctic foxes eat, continue reading and find out all about their diet.

What Do the Arctic Foxes Eat?

Arctic foxes both hunt for food and eat any dead creatures they find. They also eat animal feces, seaweed, and berries when they are in season. Their diet includes insects, birds, eggs, chicks, small rodents like lemmings, lizards, amphibians like frogs and newts, fish, and ringed seal pups. They’re smart enough to store food for later in caches.

Finding Food is Hard in the Arctic

The Arctic is a harsh place for any creature, including the Arctic fox. Although summer is a time of plenty, it can be famine during other times of the year.

The Arctic experiences 24-hour darkness during the winter. Any animal burns up a lot of calories just trying to find food during this time since many miles have to be traveled per day looking for food.

In order to survive, the Arctic fox has a wide variety on its menu. It cannot afford to pick and choose, since it never knows when it will be able to find food again.

Arctic foxes store up as much body fat as they can to survive off of when they cannot find food. They do not hibernate, so they need to find food during the winter. 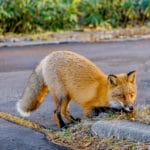 They find food in many ways. They hunt just about any creature their size or smaller, they eat any dead animals they find or eat the leftovers of a larger predator’s kill, they eat berries and seaweed when they find them.

They also store food for later in preparation for winter.

Because of its remoteness and relative lack of predators, many species of birds like the snow goose choose to raise families there.

The Arctic has short summers of 24-hour daylight, making it a great time for birds to find food. There’s more than enough for themselves and to feed ravenous chicks.

There aren’t many trees in the Arctic, so birds need to nest on the ground. Arctic foxes have learned to adapt to this situation.

They drive off the parent birds and snatch an egg. They run off and bury the egg in the ground. According to National Geographic, a goose egg lasts up to a year when kept in the Arctic permafrost.

Arctic foxes also bury other kinds of food for later but prefer to bury eggs. These little piles of food are called caches.

Arctic foxes have such sensitive noses that they find their caches by smelling them. Sadly, the invading red fox often smells these caches and eats them before the Arctic fox can.

Dangers from the Red Fox

Because of climate change, the Arctic is warming up, making it a good home for the red fox. All fox species are opportunistic, and the red fox is no exception.

In the last hundred years or so, they have traveled from the south to the Arctic and discovered that it’s a good home. There are fewer people to harass them.

Red foxes are larger than Arctic foxes, so Arctic foxes wind up being prey for red foxes.

According to Alaska Magazine, red foxes are also eating the Arctic fox’s egg caches and driving Arctic foxes from their dens. There is limited den space in the Arctic.

An Arctic fox without a den is soon a dead fox.

Since the Arctic is heating up, red foxes do not need the dense coats and fat stores that Arctic foxes evolved to survive polar winters.

They can eat up all the food that used to be eaten by the Arctic fox. There just isn’t enough food for both species to survive for much longer.

Although the Arctic fox is currently not listed as endangered, this is expected to change soon.

Just losing one way is bad, but losing even more may be catastrophic for the Arctic fox in the coming decades.

They would stay close enough to smell the bears but stay far enough away to avoid becoming prey for the bear. They wait for the bear to make a kill, gorge itself, and then leave.

The Arctic fox then moves in to pick up the leftovers. Now the ice packs are shrinking, making it nearly impossible to follow the bears.

One of the main animals that Arctic foxes eat are lemmings. Lemmings do not hibernate and are active all year long, making them relatively easy to hunt.

What is the Weirdest Thing an Arctic Fox Can Eat?

The weirdest thing an arctic fox has been known to eat are the feces of other animals, particularly polar bears. Feces contain very few nutrients but may taste okay to the fox. Eating feces is a bad habit that can be hard to break in pet dogs.

Arctic foxes will eat any corpse they come across, as this is free meat that they do not have to spend a lot of time and energy killing. Arctic foxes do not hunt humans. They do bite if frightened, and the bites may carry rabies.

Why Do Arctic Foxes Bury Eggs?

An egg is a treasure chest of protein. Arctic foxes will often store food for later, including burying goose eggs. National Geographic reports that Arctic permafrost is cold enough to keep eggs fresh for a year.

They face severe competition from invading red foxes for food and dens.