With more than 5,000 frog species already discovered worldwide, only 90 are found in the United States.

This is a fact I had to listen to in detail one afternoon when my daughter came home from school, all excited and bright-eyed to share her newfound knowledge about frogs.

I have to be honest, I didn’t really care much, but then she convinced me to let her keep a pet frog (or two) because they were just the cutest…

She’s my daughter and I love her, so I gave in, and the African Bullfrog and Bumblebee Dart have grown on me since.

I know that we live in an area where wild animals can make it into my yard, and so I wondered how we can keep her two froggie pets safe and what predators prey on these small amphibians.

9 of the Most Common Frog Predators

Here’s a list of common animals that eat frogs: 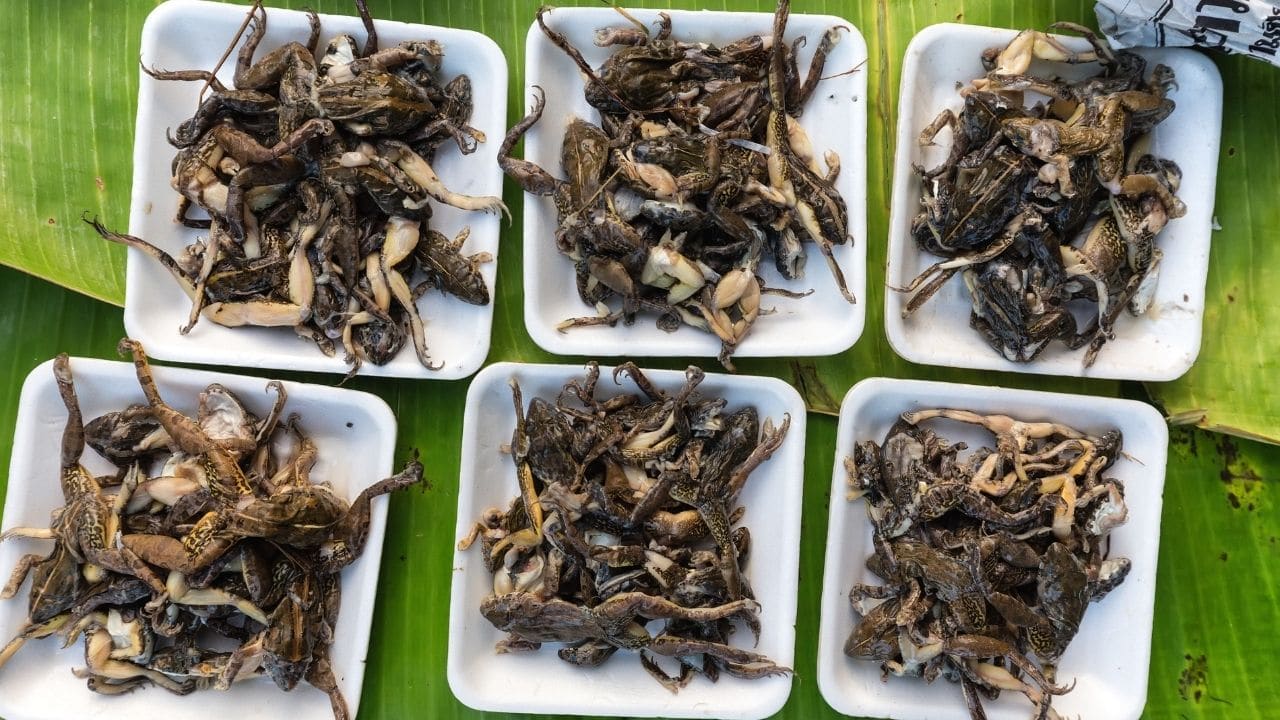 Yes, I know. My daughter’s frogs are in no danger of being eaten in my house, but in general, frogs are not safe from all people.

Frog legs are high in protein, as well as other vitamins and minerals, and part of many a delicious meal in countries such as Cambodia, China, France, Indonesia, Italy, Slovenia, Spain, Thailand, Vietnam, and some states in the U.S. (luckily, not where I live!). 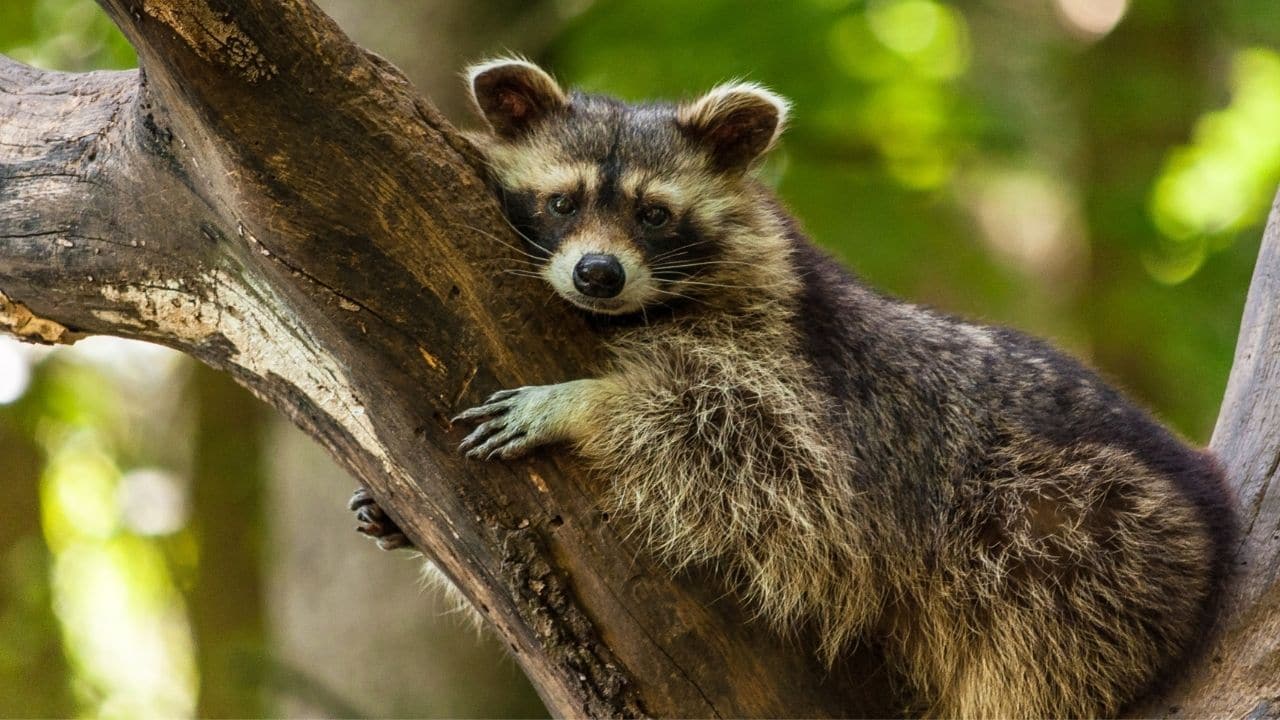 Living in the same habitats as frogs makes it easy for raccoons to feast on a frog.

My daughter has shared that this is especially true for those raccoons and frogs that live around lakes or in swampy areas in Asia, Europe, and North America.

These animals aren’t the greatest hunters, and so they aren’t too picky with what they eat. Frogs are a valuable source of meat and other nutrients, and raccoons can catch these small animals off guard and prey on them. 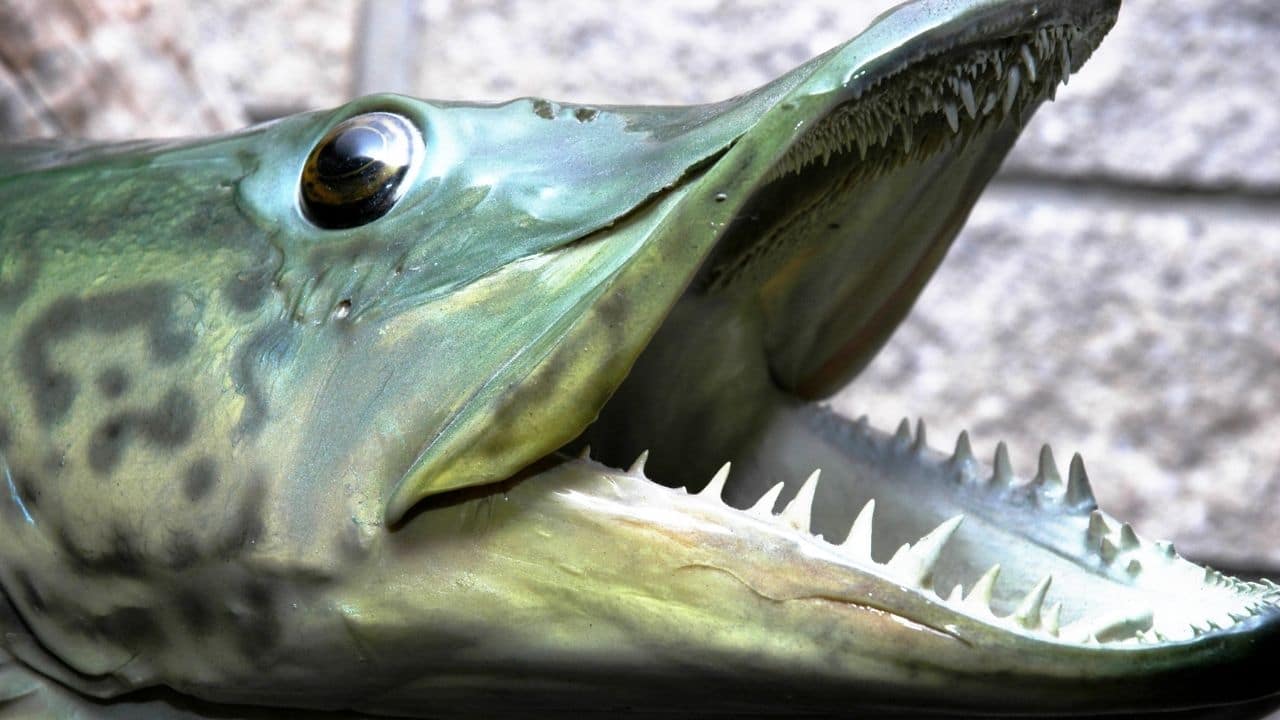 Large-sized fish, like muskies, redfish, snook, catfish, smallmouth bass, largemouth bass, walleye, spotted bass, and muskellunge prey on frogs, like the green frog or bullfrog that spends a lot of time in the water to mate and lay eggs.

Frogs are slow swimmers and the baby frogs hatch from eggs underwater, making them easy prey for fish.

Fish that are smaller like goldfish and Koi prey on frog eggs. 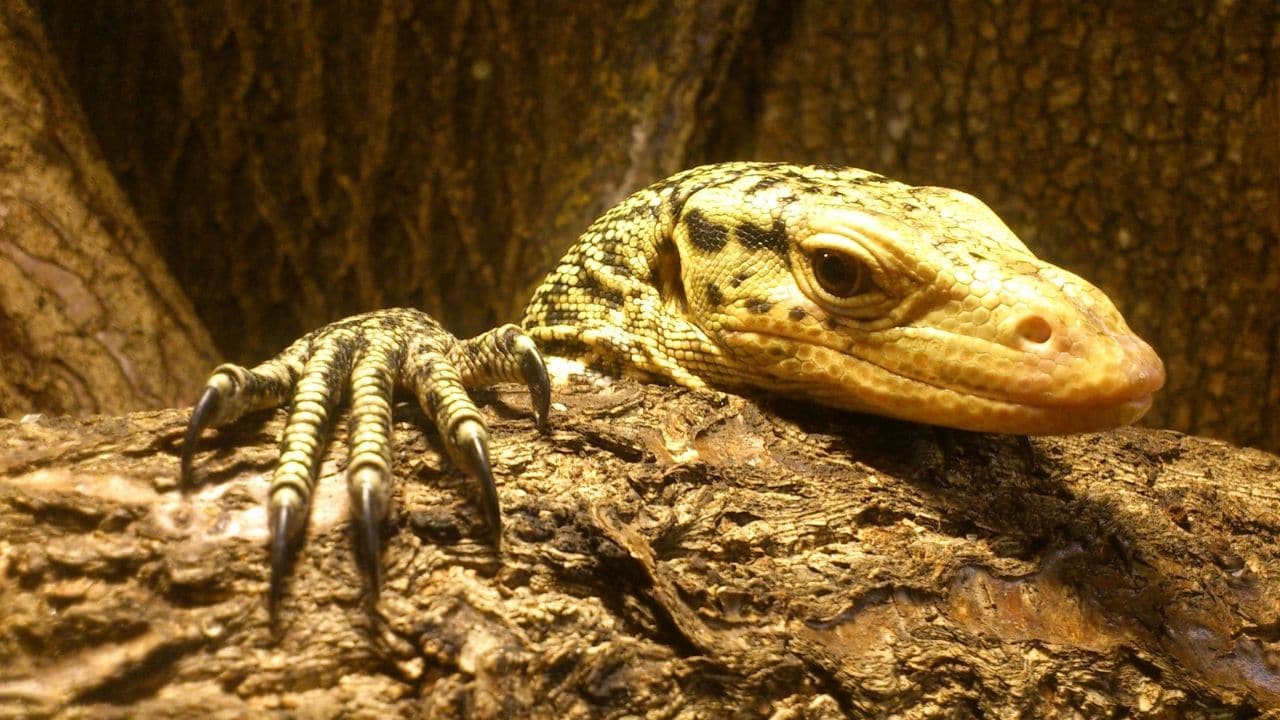 Eating a frog provides lizards with much-needed nutrients since it is a protein-dense meal. Some lizards are able to kill frogs with the first bite, and then they eat them. 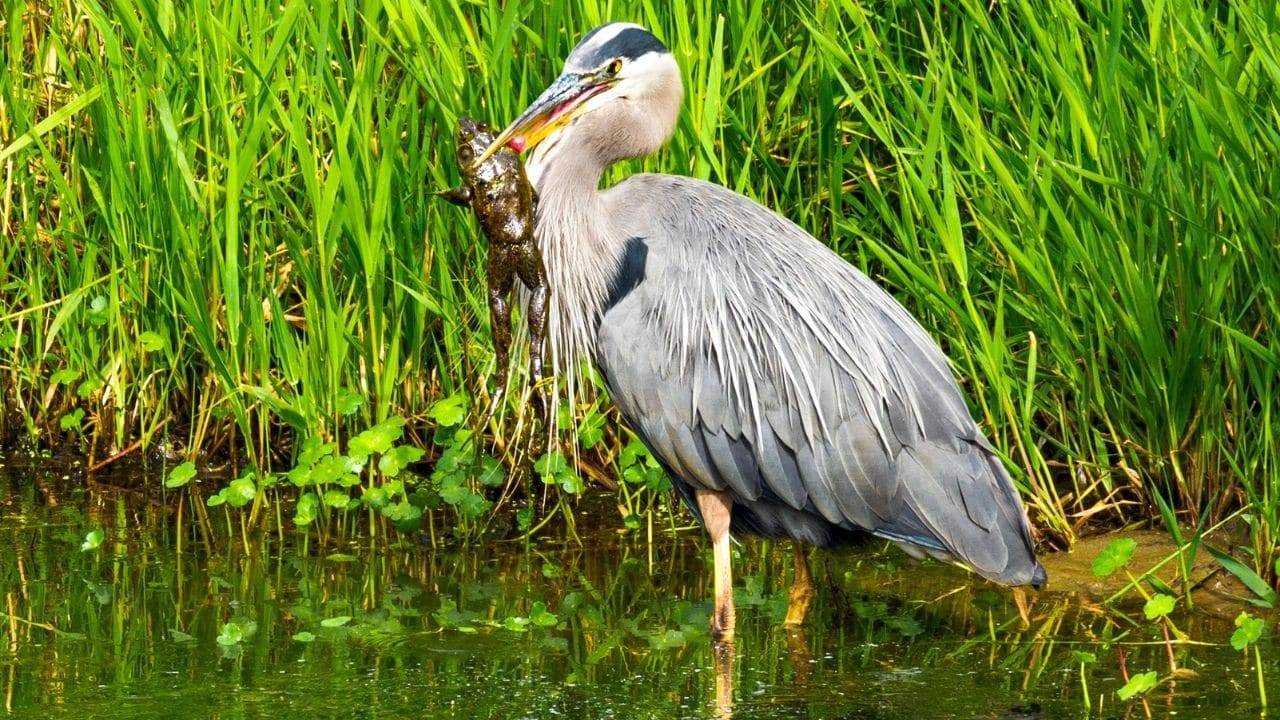 Big birds like egrets, ducks, swans, geese, and herons preferably prey on fish, but if the chance presents itself, they’ll catch and swallow a frog too.

With their large beaks, these water birds are able to catch live frogs and digest a frog in their beak. There are some birds that store the frogs in their beaks to feed to their offspring. 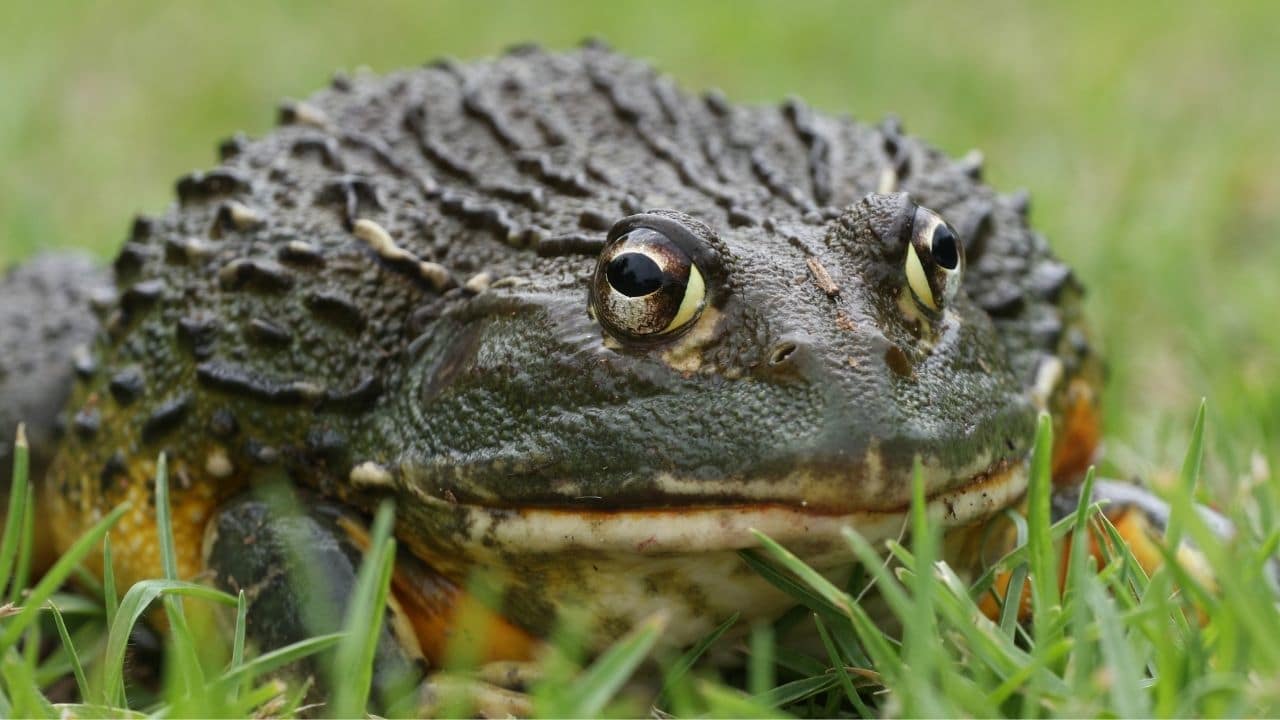 Some frogs do eat other frogs, especially larger species preying on smaller ones. For example, bullfrogs are known to eat smaller frogs in an act of dominance.

The African bullfrog, like the one my daughter has, is a prolific breeder, and in the wild, parent frogs need to care for their young. When food is scarce, going after smaller frogs is not a no-no. 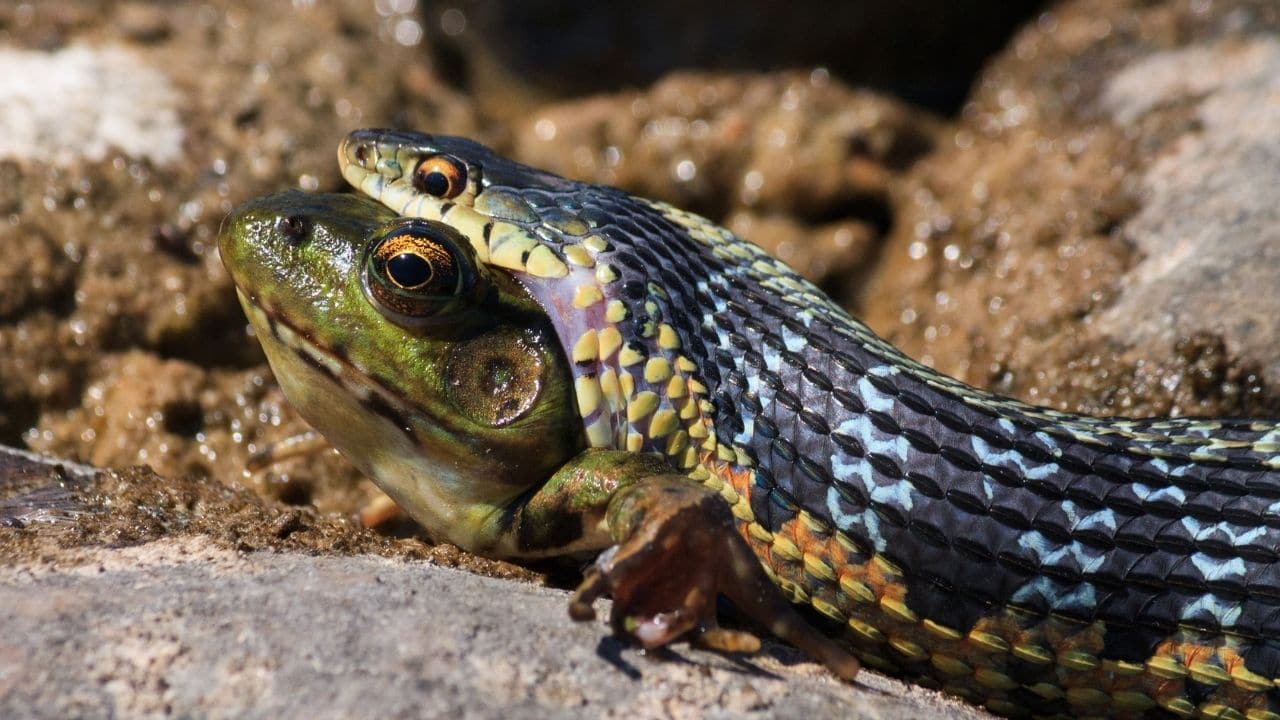 Asian keelbacks, Asian pitvipers, and Garter snakes are fond of eating frogs. These snakes (and others) easily track down (or stalk) frogs by following them from habitat to habitat, until the snake is ready to strike.

Perhaps a little too eager, my daughter told me that snakes kill the frogs by swallowing them whole and digesting them or biting them.

I know for the area in which I live, snakes are a real danger to my daughter’s froggy pets, so we ensure the frogs are safe in their aquariums. 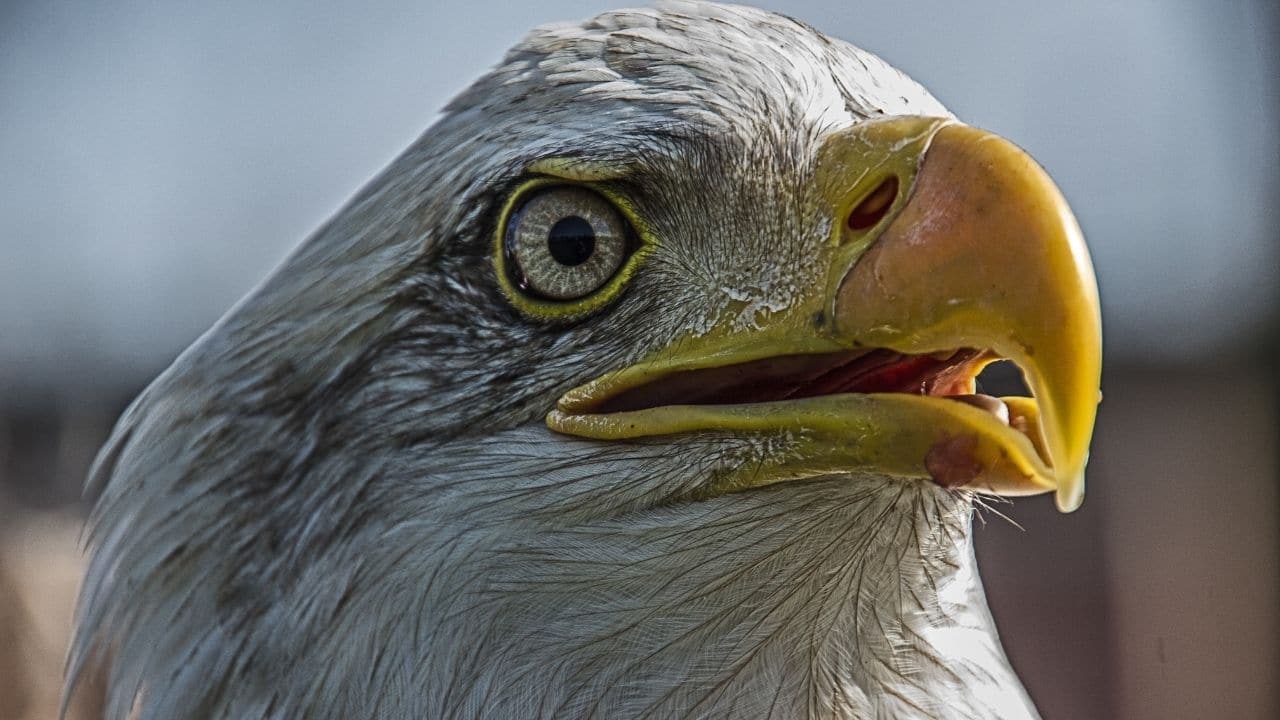 With exceptional eyesight, eagles can easily spot frogs, swoop in, and make a frog their lunch or dinner.

An eagle can see clearer and up to 5 times further than people can, enabling these flight animals to prey on frogs that have little to no chance of survival. 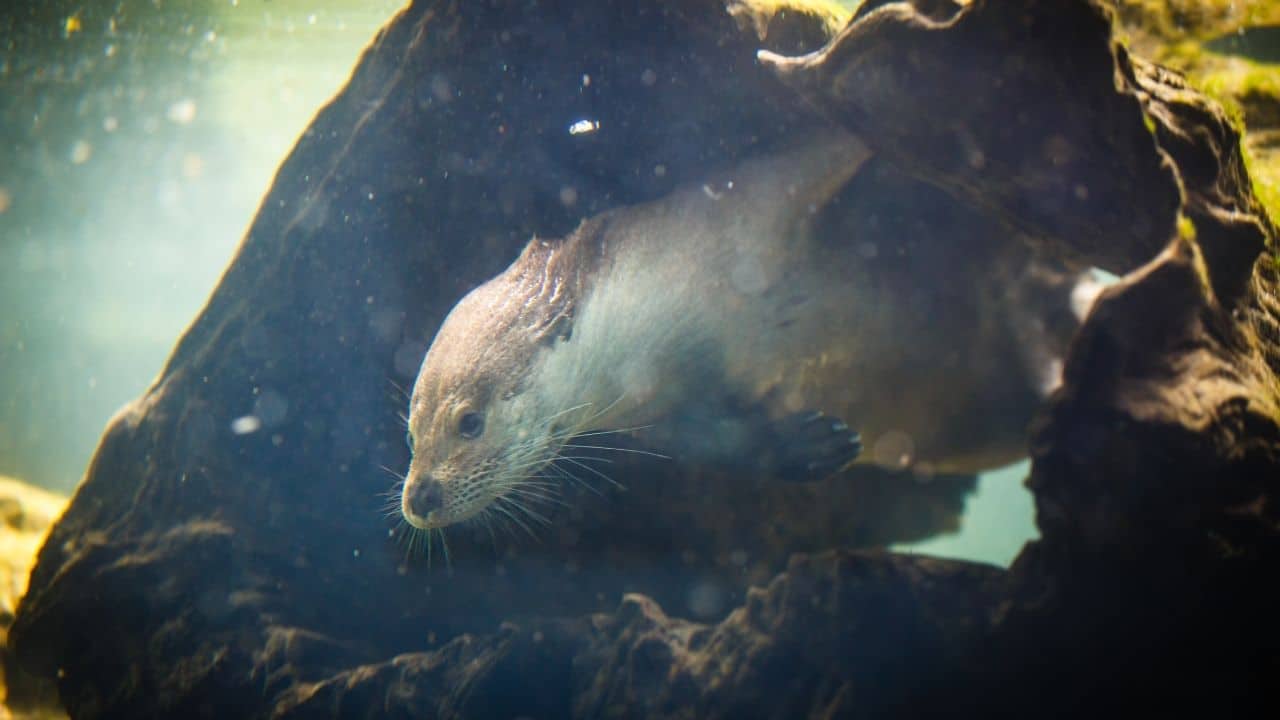 While otters mostly eat fish, they like eating toads and frogs too.

Since these animals are carnivores and frogs are a great source of protein, it makes sense that they would feast on frog legs and other froggy body parts.

Interesting to note is that otters are best at hunting in the water, so they love feasting on aquatic frogs.

What is a predator of a frog?

Since frogs are easy prey animals, there are many predators out there that eat frogs. These predators that eat frogs include humans, otters, opossums, raccoons, mink, foxes, birds of prey, weasels, polecats, snakes, badgers, herons, and more.

How do frogs protect themselves?

Frogs aren’t big fighters, but they do have some survival skills. These skills include camouflage and poison. Leopard frogs, for example, are difficult to spot when they are stationed on a lilypad, while grass frogs are well hidden when there’s grass around. There are also inedible species of frogs, like the poison dart frog, due to them being poisonous.

If you keep pet frogs, then knowing what animals — whether they are big or small — could prey on your pets is important so you can do what you need to keep these pets safe.

There are many animals, from small mammals and fish to birds, that make an easy meal out of frogs, and then there are people too, who eat frogs as a delicacy.

[…] son decided to buy me a pottery frog at the local flea market one Sunday afternoon, and as I placed the little ornament in the garden, I […]