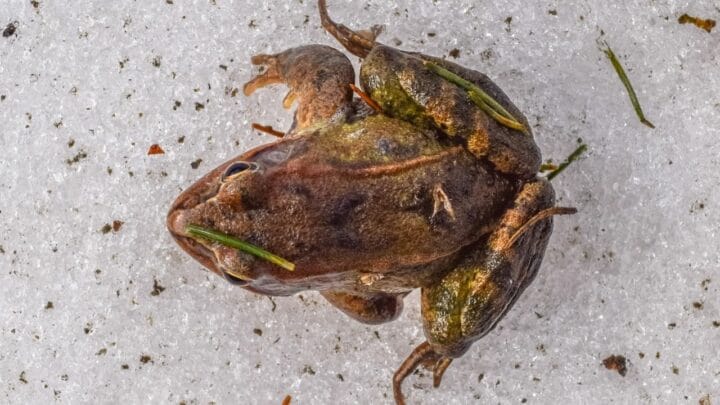 There are many aspects of nature that make people scratch their heads and wonder, such as where in the world do frogs go during the winter?

It’s not as though they have wings to soar off to warmer climates as birds do. So, where do they go?

Well, the answer to this question relies heavily on the species of the frog, which means that there are actually several different hideouts for frogs to ride out the colder temperatures.

Even so, this is an uncomplicated mystery that is easily explained.

Where Frogs Go in the Winter

Terrestrial frogs will often either hibernate by burrowing underneath the ground or look for a source of shelter inside of logs or under piles of leaves. Aquatic frogs hibernate deep at the bottom of a lake, river, or another body of fresh water. Other frog species choose to estivate when facing harsh weather conditions.

Surprisingly, there are some frog species, such as the American Toad, that are good at digging holes. Frogs that have the capacity to dig will usually burrow underneath the ground to hibernate throughout the duration of winter.

These frogs will dig their way deep under the dirt to locate a spot that is beneath the frost line and stay there until spring.

However, some terrestrial frogs, such as the Wood Frog, are terrible at digging holes. Instead, they will seek out a place like an old tree log, a weathered piece of bark, a rock crevice, or a pile of leaves to create their winter home.

While this temporary shelter is often inadequate for escaping the freezing temperatures, the frogs are able to miraculously survive the winter in spite of their small bodies freezing and essentially becoming crystallized by the ice.

How do frogs even manage this? Believe it or not, anti-freeze!

Although the frogs will indeed develop ice particles inside of their body cavities and become halfway frozen, the high levels of glucose contained within their organs will act as an anti-freeze and prevent the frog from freezing to death.

The half-frozen frog will stop breathing and look like it is dead. However, the frog’s body will begin to thaw out once the temperature rises again, its heart will start beating again, and it will resume breathing.

These frogs literally have the amazing capacity to rise from the dead!

Aquatic Frogs Hibernate in the Water Throughout the Winter

Aquatic frogs, such as the American Bullfrog, also have interesting hibernation tactics, but their exact technique of underwater winter survival may be slightly surprising.

Instead of burrowing deeply underneath the mud at the bottom of a lake, as turtles are known to do, aquatic frogs will lie directly on top of the mud to avoid suffocation.

Now, this may leave you wondering how the frogs manage to breathe while they spend several months relaxing at the bottom of a pond. Sure, frogs and tadpoles have gills, but that’s an awful long time to stay underwater!

Well, aquatic frogs need to seek out a source of water that has a rich supply of oxygen to carry them through the winter. Instead of breathing during hibernation, aquatic frogs survive by the water’s oxygen content naturally seeping through their bodies.

While they usually remain still for the duration of winter, they may occasionally swim around a little before returning to their chosen place on top of the mud.

Frogs May Estivate Instead of Hibernate

While most Northern American frogs hibernate through the winter, there are some species of frogs, indigenous to harsher climates, that engage in a process referred to as estivation in response to extreme weather conditions.

For instance, the African Bullfrog is known for estivation throughout seasons of hot, dry weather.

When estivating, frogs will shed their skin to mummify themselves inside of a homemade cocoon, which protects them from severe weather conditions.

After the climate is once again suitable for life, they will go back into their natural habitats. While estivation is a common survival strategy for frogs that live in extremely dry climates, it is also an effective tactic for winter survival.

Frequently Asked Questions about Where Frogs Go in the Winter

Can Frogs Die from the Cold?

Surprisingly, the answer is no. Frogs cannot freeze to death. Although they will accumulate ice crystals inside their small bodies and stop breathing, they will awaken as soon as the temperature warms and their bodies begin to defrost.

Can Frogs Survive the Winter even if they Stay Outside?

Frogs can survive outside in the winter. Even though frogs do hibernate, as mammals do, they are cold-blooded creatures, so their internal temperatures adapt to the temperature in their surrounding environment. Many frogs do have the ability to withstand temperatures that fall below freezing.

Where Do Green Frogs Stay In Winter?

Although tree frogs are terrestrial, they aren’t very good at digging, so they will either hide under piles of leaves or find a crevice in the tree bark to stay throughout the winter.

So, the answer to the question of where frogs go in the winter depends on the type of frog that you are talking about.

Regardless of whether the frog species is terrestrial or aquatic, a frog’s winter survival method is still an undeniably interesting fact for you to know. 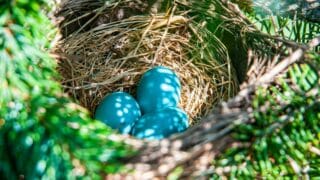 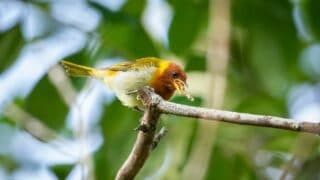 Next
How Robins Find Worms — Incredible!