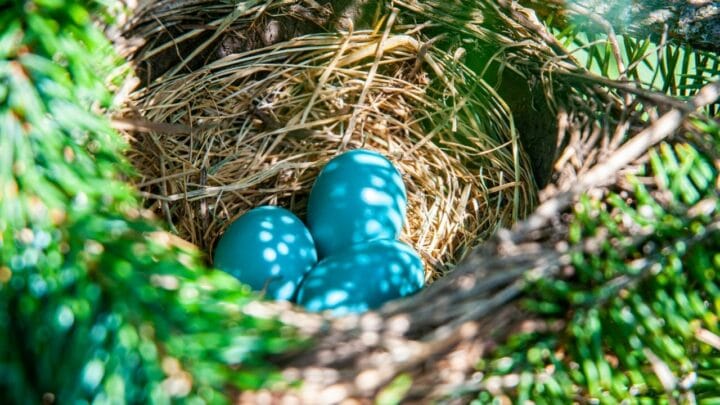 Robins are smart birds. They eat first because it is difficult to find earthworms once the sunrises. Once they have fed their bellies, they lay their eggs.

A robin lays one egg a day (a robin clutch consists of four eggs) during the mid-morning hours between the middle of April and the middle of August. She can lay her eggs in mid-flight while flying over her nest!

One Egg a Day

For understandable reasons, robins only lay one egg every day. As opposed to mammals, female birds only have one functioning ovary.

The ovaries are the reproductive organs that create eggs.

The ovary of a bird resembles a small bunch of grapes with varying sizes. These “grapes” are actually the yolks, not the ova.

The single ovum ready to be expelled appears to be gigantic.

One or two of the ova are about half the size, two or three are a little smaller, and the remainder are tiny. The biggest yolk is released from the ovary once a day.

That is, it emerges from the ovary and travels down a tube towards the robin’s body’s exterior. The oviduct is the name for this tube.

Formation of the Eggs

The yolk of a female robin that has mated with a male will become fertilized. The yolk will still travel down the oviduct and be laid like a regular robin egg.

If the robin hasn’t mated, she will lay an egg, but it won’t grow into a robin.

The tube’s walls gently release (leak out) fluid-specific protein albumen to encapsulate the yolk as it passes through the oviduct. The oviduct produces calcium compounds at the completion of the tube’s journey.

The calcium compounds will harden into the shell, but the egg will be soft until released. You can imagine how a female robin’s body is drained by the development of an egg!

Robins typically lay only four eggs. They lay one egg each day, till the clutch is full.

Some birds lay their eggs for a long time. If one egg is removed each day, the robin will continue to lay an egg.

She only stops lying when the clutch feels correct underneath her.

Robins keep all the eggs cool until after they’ve laid a whole clutch, so they don’t start to grow. It signifies that the robin babies will hatch at about the same time.

After she lays her second egg or all of the eggs are laid, mother robins may begin incubating their eggs in the evening.

For 12 to 14 days, females sit on the eggs. In most cases, the female is the one who incubates the eggs.

She refuses to leave the eggs for more than 10 minutes, even when the weather is nice.

The female is responsible for maintaining the proper incubation temperatures, keeping the eggs warm in the winter, and shade in the summer.

She must also rotate or turn the eggs numerous times per day. She jumps onto the nest’s rim and rolls the eggs gently with her bill.

Turning the eggs keeps them at almost the exact temperature and keeps the kids from clinging to the interior of the shells.

Males only rest on the eggs on rare occasions, but they stay in the area during the day and respond quickly if the female makes an alarm call.

The male robin may bring food to the nest to feed the female, but she normally leaves to feed herself.

Some birds, such as owls and hawks lay their eggs while the weather is still chilly, and the incubation process begins as quickly as the first egg is laid.

Hence, the eldest baby can possibly be larger than the youngest. When hunting is difficult and the chicks are hungry, the largest may eat the smallest.

The oldest one also departs from the nesting before the subsequent chicks.

The eggs should be kept warm all the time for them to develop. A robin’s body temperature averages 104 degrees Fahrenheit or greater.

Feathers insulate the eggs by holding the bird’s body heat inside, while the outside feathers are cold to the touch. Female robins use a unique technique to keep their eggs warm.

The brood patch is located on the female’s abdomen where her feathers emerge during the incubation period.

A female robin keeps her body warm by exposing her outer feathers and resting her warm bare stomach on her eggs or tiny nestlings.

Sensors in many birds’ brooding patches are likely to detect the temperatures of the eggs.

The birds may then determine how long they should spend on the eggs and change their incubating behavior and activities accordingly.

For example, they may sit on the eggs with varying degrees of security, or they may leave the clutches to be uncovered for a brief period of time while she feeds or drinks.

The baby chick uses its egg tooth, a strong hook on its beak and the chick breaks a hole through the shell. Then, in between intervals of resting, it must fight to get out.

It’s no surprise that hatching might take up to a day to emerge from the shell.

In most cases, the hatchlings come a day apart — the order in which they were released. The newborns, who are bare, red, damp, and blind, need a lot of food.

During the 9-16 days that the chicks spend in the nest, it becomes full-time work for both mom and dad to guard the nest, look for food, and feed the demanding babies.

Why are robin eggs blue?

When the shell is formed, pigments are released from the shell gland. It is said the darker blue the shell is, the healthier the chick will be.

Is it true if you touch a robin egg or chick the mother will abandon it?

This is a myth and is commonly told to young children to prevent them from touching eggs they find of hatchlings that fall out of a nest. So, it isn’t true that mother robins abandon their eggs or chicks.

Robins are beautiful birds and can be fierce while caring for their eggs and babies.

Both parents participate in the nesting process and caring for the chicks. 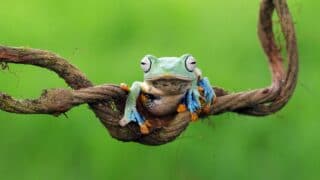 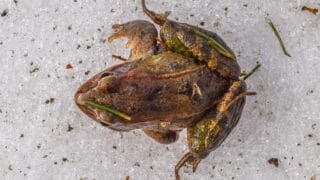 Next
Where Frogs Go in the Winter — Do You Know?