Out of all the thousands of snake species, the majority of them lay eggs. Some snakes may only lay two eggs per clutch, while others can lay as many as 80 per clutch.

But, there are others that give birth to their young.

Yet, if you’re intrigued about how snakes lay their eggs, you’re in the right article!

How Do Snakes Lay Eggs?

The female snake makes a nesting site for the eggs to rest on before they hatch. The eggs have been fertilized. The female releases the eggs through her cloaca, with the muscles near it tensing to push the eggs out. Many times they come out in clumps and coved in fluid they need to help them developed.

How Snakes Lay Their Eggs

When oviparous snakes deposit their eggs, they follow the following procedure:

A fertilized egg is released from the ovary into the oviduct, specifically to a location known as the infundibulum. The egg is coated with fluids from the oviduct. It is in the process of becoming.

Upon reaching the appropriate stage of development, the female begins to lay her eggs, which travel from the uterus and out via the snake’s cloacal hole.

In many respects, the cloaca is an entrance that is located around two-thirds down a snake’s body length. The cloaca is responsible for a variety of functions, one of which is egg-laying. 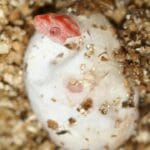 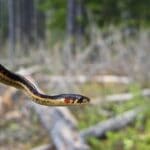 The female snake must tense her muscles in a rhythmic manner in order for this to occur.

Prior to laying eggs, some pregnant snakes sunbathe with their belly up in the sun, which is thought to help warm up their reproductive systems.

The eggs are laid in a clutch by the mother, who deposits them all in rapid succession. Because of the sticky fluid that ties them together, they should cluster together as a group.

Due to the fact that accidental displacement poses a hazard to the hatchlings’ survival, this sticky goo is important.

The majority of oviparous snakes will discard their eggs at this time. Some snakes, like pythons, wrap themselves around the eggs in order to protect and keep them warm throughout the winter.

Serpents that lay their eggs are known as oviparous, which is the largest group of living snakes.

With oviparous snakes, each female develops immature egg cells in the ovaries, which are then released. Most of these eggs are fertilized due to the mating process.

The oviduct is the site at which the egg cells begin the process of growth and development. When the eggs are laid, a protective shell develops over them, giving them the appearance of what we associate with eggs.

The eggshell, meanwhile, isn’t hard and strong like a chicken’s egg. It has a smooth texture and a leather-like feel to it.

The yolk of the egg grows slowly within the egg. This yolk, similar to that found in a chicken egg, provides nourishment to the young snake while it is growing.

Female snakes are typically ‘gravid,’ for 4 to 6 weeks before giving birth. Whenever her time window is over, she will look for a secure and safe location where she may lay her eggs.

In the wild, it is critical for the snake to locate a quiet location where she will be safe from predators. Once they lay the eggs, the female snake does not return to them to keep them safe until it’s time for them to hatch.

Of course, snakes that are being bred do not have to worry about this per se, but they do have the maternal instinct to make sure their eggs are laid in a safe spot that is provided for them.

In a much smaller capacity, the bred snakes go through the same routine they would in the wild with the resources that are provided for them by the owner or breeder.

As soon as the eggs hatch, the baby snakes which are precocial, meaning they can survive on their own as soon as they hatch and wiggle out of the shell.

The hatchlings have an egg tooth which is a special tooth that allows them to chip away at the eggshell until they are free from the shell.

How to Help Snakes Lay Their Eggs

The reason snakes painstakingly select their nesting places is that their eggs require optimal humidity and temperature range.

If these environmental requirements are not satisfied, the snake’s eggs will not hatch, which is extremely detrimental to the species.

Pet snakes do not have the option of building their own nests, so they must depend on their owners or breeders to do it for them. As a breeder, I make sure to include items that the snake may find in its environment for when she lays her eggs to satisfy her maternal needs.

The pet owner or breeder must get containers for the hatchlings to incubate in and then containers for the live babies to live in. In addition to substrates, water bowls, thermometers, heat lamps, and bulbs, or whatever heat source you choose to use.

Do Snakes Bury Their Eggs

Whenever feasible, most snakes will deposit their eggs below in soft dirt or sand, preferably in the earth. Such settings function as a natural incubator for the development of new baby snakes.

Because the eggshells are fragile, they are unable to bear significant pressure. Mosses, grasses, soft dirt, or sand are all good options for creating a buffer zone around the eggs to keep them safe from the environment.

When Do Snakes Lay Eggs

In opposition to humans, most animals have a tendency to reproduce in a predictable pattern or rhythm. A common example would be oviparous snakes, which brumate during the winter and breed in the spring.

Several other animals exhibit similar behavior: hibernation is widespread among mammals, while brumation is frequent among reptiles.

How Many Times do Snakes Reproduce in Their Lifetime

Snakes reach sexual maturity at a young age, which varies depending on a variety of circumstances.

Generally speaking, snakes achieve sexual maturity around 2-3 years, if they are in good condition. Some snakes do take longer to mature.

Do all snakes lay eggs?

While they may not be as cuddly as a dog or cat, they do make great pets, and being able to watch the egg-laying and waiting patiently for the little baby snakes to arrive, and caring for them is extremely rewarding!

How Many Teeth Do Snakes Have? Let's Count!

[…] mouths of the majority of snakes have around one hundred tiny teeth. Some snake species have about three hundred teeth, while others […]