There are some aspects of nature that simply pique our curiosity. Bird lovers, for instance, may wonder how long baby robins stay in the nest with their parents.

While knowing the answer to this question may not prove to be very useful, it is fascinating nevertheless.

If you have been fortunate enough to come across a robin’s nest, you should already know that disturbing the nest is ill-advised.

Robins are very territorial during their breeding season and the babies need to be strong enough to fly and fend for themselves before they will be able to survive without their parents’ care.

Fortunately, you won’t need to wait too long before you have the opportunity to meet the hatchlings.

How Long Do Baby Robins Stay in the Nest?

Robin eggs hatch approximately 2 weeks after the final egg has been laid. Once they hatch, baby robins remain in the nest with their parents for between 9-16 days. By day 13, they are usually strong enough to leave the nest and make their first fledge before they are able to survive on their own.

Baby Robins Hatch Two Weeks After the Eggs Have Been Laid

Once the mother robin has laid the last and final egg, she will remain in the nest while the father goes out to find food.

But it won’t be long before the eggs hatch and both parents share the responsibility of caring for the hatchlings. 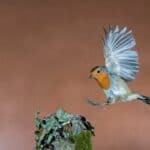 After that last egg has been laid, it will be between twelve and fourteen days before the baby robins begin to hatch, about a day apart from one another.

The hatching process can take an entire day for each hatchling. The baby robins literally need to struggle for hours to break their way out of the eggs after they initially use their beaks to poke holes in the eggs.

Hatching uses up a lot of energy, so the baby robins are inclined to take frequent breaks throughout the process of hatching. When a baby robin is first born, it will weigh about 5.5 grams but will grow into an adult-sized robin in only two weeks.

Baby Robins Stay in the Nest for Nine to Sixteen Days

After the eggs have hatched, the baby robins will stay in the nest for an average of thirteen days while they rely on their parents to care for them.

When they finally make their initial leap out of the nest, which is referred to as fledging, they still won’t be completely strong enough to fly on their own.

They may fall from the nest and make several unsuccessful attempts at flying before they eventually soar off. Fledging can be very dangerous for baby robins, but it is a necessary step in their development.

The baby robins may inadvertently be injured from falls or become prey to other animals, such as cats.

Baby robins will continue to be dependent on their parents for a few days after they initially fledge from the nest.

They need to get a sufficient amount of flying practice and strengthen their muscles before they will be capable of independence.

Mother and Father Robins Both Care for the Young

Although the mother robin lays the eggs, the father continues to stay close to the nest and contribute to the care of the baby robins.

The parents will take turns leaving the nest to look for worms and will both feed the baby robins earthworms that have been partially digested for the first four days after the eggs have hatched.

The parent robins will gradually increase the size of the meals that they provide for the babies, moving from offering a small mouthful of food to feeding the babies’ entire insects by the time they reach two weeks of age.

Since baby robins grow so fast, they need a lot of food to fuel their small bodies, so that they can become strong enough to fly.

The mother and father robins both remain close to the nest while they make food runs throughout the day so that the parents can work effectively as a team to protect the nest while subsequently searching for food.

The parent birds have been known to return to the nest with food for the babies as often as one hundred times in a single day.

Eventually, the mother may leave to lay a fresh batch of eggs while the father continues to care for the hatchlings.

After the initial fledging, the baby robins will go back to the nest and stay with their parents for a few more days while they perfect their flying skills.

Then they will say goodbye to the parent birds and soar off on their own into the sunset.

Can a Robin Fledgling Survive on its Own?

Do robins continue sitting on their babies even after hatching?

Aside from repeatedly searching for food to return to the nest with throughout the day, the mother robin will continue to sit in the nest with her babies for about two weeks after the eggs have been hatched.

After the eggs have been hatched, baby robins remain in the nest for an average of thirteen days before the first fledge. Afterward, they’ll stick around for a few more days to gain strength.

Most of the time, you will just end up being an observer of this beautiful part of nature, but if a fledgling gets stuck on the ground, you may need to care for it until it is strong enough to soar away.