Why Frogs Croak — The Answer’s Here! 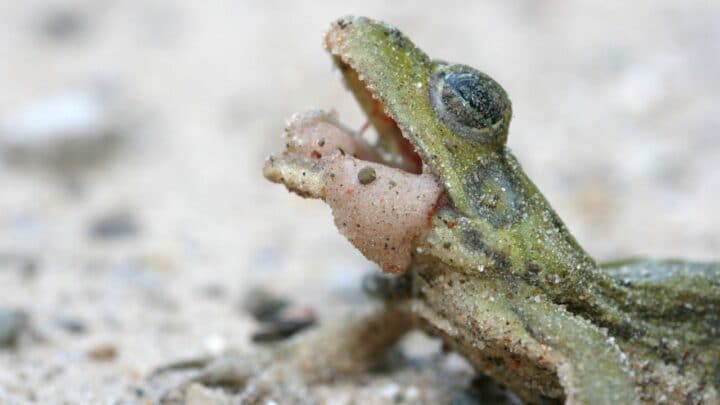 We’re all familiar with the sound of cacophonies of croaks filling the still night air. Yet, did you wonder why frogs make these strange and distinct calls?

These fascinating creatures are unique in so many ways, from the design of their bodies to their eating habits. Indeed, there’s always something new to learn about frogs.

Recently, I became fascinated with finding out exactly why they croak.

Croaking is most commonly associating with mating and is a way for males to attract mates. However, some frog species croak out of territoriality to announce their presence. Others call out to warn of danger or because they are alarmed or distressed. Some frogs emit a “release call” when an unwelcome mating partner grasps them.

Frogs Croak to Attract a Mate

The main reason frogs croak is to attract a mate. The loud sound of male calls is heard by female frogs, who then select males based on the sound of their song.

This varies from species to species, but cadence, frequency, and depth of sound have a lot to do with how females choose males.

Once a male frog has piqued the interest of a female, she will allow him to mate with her and fertilize her eggs.

Females also emit mating calls, but they are usually soft and subdued, so much so that the human ear can barely hear them, and they cannot be distinguished among the sound of males.

If like me, you’ve noticed that frogs become particularly noisy after rain, it’s because rain creates excellent conditions for females to lay eggs. In addition to this, frogs are happiest in moist, humid environments.

This is also when frog food is most plentiful. Rain washes up worms and destabilizes flying bugs, providing ample fodder for these hungry amphibians.

Frogs Croak to Mark their Territory

These funny creatures do indeed croak to announce their presence in a particular space. This is because some frog species are territorial and want to let it be known that they are the owners of a specific spot.

While this kind of behavior is typically observed in male frogs, some female frogs also croak to indicate territory, like in the case of the bullfrog.

Frogs Croak When They are Startled or Stressed

Sometimes, when a predator grabs a frog, they will let out a distress call as a way to try and scare off their attacker.

It has also been proven that this sometimes attracts other predators, turning hunters into hunted and allowing the frog to escape.

An alarm call, in turn, is the sound a frog makes to warn others of impending danger. This is usually just before they jump into a body of water to escape a threat.

What Release Calls are

A release call sounds slightly different from a croak and is a type of vocalization associated with an unwanted mating partner.

Frogs sometimes get a little carried away during mating season and will attempt to fertilize any female in their presence. If a female is not interested, she will release a sudden sound to inform the male that he is undesirable.

This sound forces the male to release his hold and leave her be.

If a female is interested in a particular male frog, she will suppress her release call and allow fertilization.

Most male frogs (and only a limited species of female frogs) have a big bubble-like sac under their chin that enlarges and inflates when they croak.

While there is still much to learn about the science of frog croaking, this mechanism has led researchers to believe that frogs are able to croak by forcing air to travel over their vocal cords.

The sac, then, functions as a resonator, boosting the sound of their call to make it much louder. In fact, it can be heard for up to a mile.

Why so loud? Male frogs need to vocalize over quite a distance to attract females that are far away.

Why do frogs do nighttime croaking?

Most frog species are nocturnal, hence they’re more active from dusk until dawn. For this reason, it is no surprise that most of their croaking is heard once darkness has fallen, especially during their breeding season. If you are situated close to a body of water such as a dam or pond, you’re more likely to hear frogs, too, as they are reliant on water for survival and breeding.

Can I keep frogs away from my home?

A safe and organic preventative measure for frogs is to spray your porch or veranda with saltwater. Frogs intensely dislike salt-laden water as it irritates their feet. Over time, they will be deterred from visiting your home.

Why do frogs stop croaking in unison?

When a frog emits a warning or alarm croak, this signals to all other frogs nearby that a threat is present. The frogs will then disappear into safe spaces, like mud or leaves, to safeguard themselves.

I have always associated the ribbiting sound of frogs with serene nature, and I was pleasantly surprised to learn that there was so much more to the science of croaking than just making noise.

Every frog species has a distinct and unique croak, which just goes to show how evolved they are as a species. 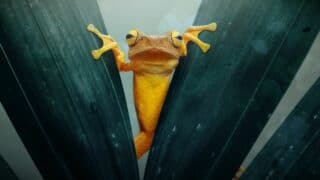 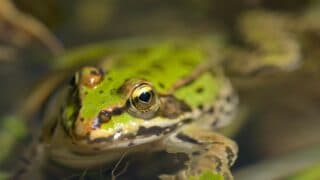 Next
How Frogs Drink Water — Ooh!f

When Frogs Lay Eggs - Everything You Want to Know!

[…] like humans and all other animals, frogs rely on water to survive. More so, if you consider that their skin needs to remain moist at all […]