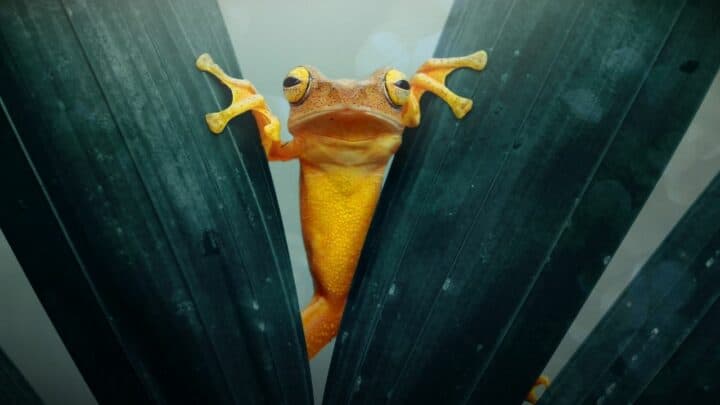 Frogs‘ unusual mating cries are well-known, but why do they scream?

Learn more about this peculiar habit of theirs by reading below.

Why Do Frogs Scream?

Some frogs make a sound that sounds like screaming when they are threatened. Frogs scream to scare off potential predators or divert attention from them. Distinct frog populations, on the other hand, have various defense mechanisms, meaning they use their abilities to scream for various reasons.

What Prompts Frogs to Scream

Whenever a frog screams, it sounds very similar to a weeping child, prompting the query, “Why?”

The scream, according to biologists, could be used for more than just scaring predators away. It could help defend the frog in other ways.

I have owned several frogs of different species over the years and even frogs in captivity scream – when there is no emanate danger. I have had frogs in their habitat enclosure scream and had no idea why.

To discover that my frog was afraid of my presence and perceived me as a danger.

In my early years of caring for frogs, I was naive and had a lot to learn. Therefore, I began to pay closer attention to my frog’s activities in an attempt to figure why they would scream.

Specific Examples of Why a Frog Screams

Whenever your frog screams, it is expressing its fear of being trapped in its present circumstances.

When a frog is cornered inside its habitat, by the hands of its keeper, or in the teeth of a predator, it will scream.

Frogs display other behaviors once they’re threatened. However, screaming is the most common and effective defense mechanism they have battling, or they come face to face with a bigger animal.

This is even true for a family dog or cat who happens to peer into their enclosure.

Most frog species don’t have toxic glands to use as a defense tool. However, some frog species are equipped with dazzling patterns and even colors that act as a warning to a prospective predator.

In these circumstances, the screaming frogs are camouflaged.

Screaming allows the frog to flee to safety or to hide when it achieves the desired effect.

The shrillness of the cry not only deters predators, but it can also surprise an enemy into freeing the frog if it has been captured.

Screaming is indeed a way a trapped frog can divert the animal attempting to devour them because they don’t have many options.

Screaming loudly when in the mouth of a predator can shock the predator into releasing the frog, allowing the frog to flee.

Budgett’s Frog, a species endemic to regions of South America, is among the most spectacular examples of screaming frog behavior in captivity. Amphibian collectors are drawn to this species because of its unusual appearance and ability to scream.

When attacked, this frog balloons up to twice its regular size and shouts at the assailant, frequently flinging itself at the attacker. It has been seen trying to bite attackers while screaming loudly.

This frog displays a wide range of amphibian defense actions all at once, making the presentation a sight to see and hear.

Bullfrogs in the wild are noted for their ability to imitate the sound of a human’s scream. The frog makes a high-pitched scream when it is picked up or trapped.

Screaming frogs are thought to signal the other frogs nearby. Hearing a frog’s distress call has been shown to cause other prey to flee.

It’s customary to sneak up on the frog at night in order to prevent one frog from alerting the others that there are predators in the area.

Screaming could potentially be used by frogs to defend themselves. Screaming frogs are trying to draw even larger animals to the situation by not just startling the offended party also alerting all nearby frogs of danger.

As a predator to a cat, the crocodile frightens the cat away, saving the frog’s life.

Screaming could protect a tadpole from danger even before it fully develops into a frog. Some frog species start screaming as early as the larval life cycle stage.

Tadpoles of horned frogs can make screams that are metallic-sounding, lasting for .05 seconds. Tadpoles’ shrieking noise is thought to have evolved for a different function than screams in their adult form.

It’s thought that these larvae developed vocal activity to avoid inadvertently cannibalism, which has been observed in the horned frog species.

The tadpoles have partly developed lungs, despite the fact that they still have to emerge as froglets. Transformation does not deter these ardent screamers!

Screaming is a necessary survival mechanism that frogs must use to survive. The scream not only startles the predator, but it might also persuade it to release the frog if it is trapped.

How long does a frog’s scream last?

A frog’s scream can last as long as five seconds. Then another scream and another increase the amount of time you are actually hearing the frog scream. There is a short pause in between screams (such as with a human who screams, takes a breath, and screams again). It can sound a lot longer than five seconds.

Do frogs scream to attract a mate during mating season?

No. Screaming is strictly a defense mechanism for frogs.

Most frogs’ screams are not the same. Each scream has a different sound to it, whether it is the pitch (high or low), how long the frog’s scream lasts, and how many repetitive times a frog screams.

One thing is for certain, all frogs’ screams serve as their main line of protection. 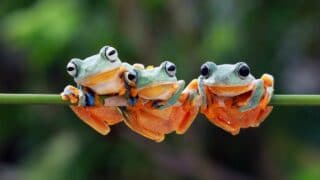 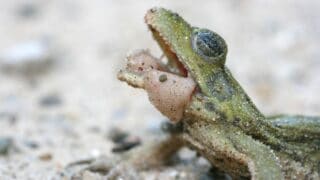 Next
Why Frogs Croak — The Answer's Here!

[…] species of frogs are alive and jumping around the world, with approximately 80 of these species USA […]

Why Frogs Croak — The Answer's Here!frof

[…] with the sound of cacophonies of croaks filling the still night air. Yet, did you wonder why frogs make these strange and distinct […]