My son decided to buy me a pottery frog at the local flea market one Sunday afternoon, and as I placed the little ornament in the garden, I began to wonder, just what do frogs symbolize?

I had noticed that there were many religions that had animals of all kinds, and most of these symbolized some aspect that was potent to that culture or religion.

But what was the meaning of frogs, and was it a good idea to have a clay frog sitting on my front porch?

I decided to travel the world, safely via Google, of course, and find out what frogs meant to different peoples of the world.

Frogs are found all over the world, and each culture has its own meaning assigned to the frogs that are present in their lands.

Native Americans also see a frog as being wise and a bringer of fertility and wealth. 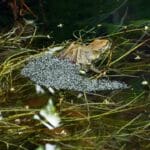 If two frogs are painted with their tongues touching, it usually means the person is enriched by shared knowledge.

Frogs are seen as fertility animals in most countries, including Central and South America.

However, here, frogs are also seen as powerful beings, and the image of a frog is often carved as a feature on a totem pole.

In Australia, the native peoples believed the frog was the mother of thunder and lightning, which is why frogs croak so loudly before a storm.

The frog is a symbol of life as water is life in a dry and desert country like Australia. Here, the frog also brings purity, symbolic of the waters that wash the dry and dusty land clean.

In this small island kingdom, the frog is revered for its good fortune symbolism, and you will sometimes see golden frogs with a traditional Japanese coin in their mouths outside buildings or temples.

This is the value of frogs to the Japanese. In addition, frogs are said to bring about a return as the name for a frog, “kaeru,” sounds like the word for return.

The Chinese see frogs as a symbol of healing and business acumen.

But don’t make the mistake of placing your frog ornaments in a garden feature that looks like a well as this symbolizes that you lack knowledge and insights.

To the ancient Celts, the frog had multiple meanings. It was usually revered as a healer, and many warriors carried a carved frog with them to promote quick healing after an injury.

As a keeper of the wells and rivers, which were sacred to the celts, frogs were revered.

Many of the deities in ancient Egyptian culture were half-human, half-animal, and there are quite a number of these gods that were part-frog.

One of these deities is Heket, the goddess of fertility who was seen to protect women while they gave birth.

Then there is also Ogdoad, which was actually a group of 4 gods and 4 goddesses. The male gods had frog heads while the goddesses had snakeheads.

For the ancient Egyptians, Ogdoad brought order and balance to the world.

You see, they believed the world was born out of a chaotic and endless watery mass, and frogs and snakes inhabited the primeval water of chaos.

The goddess and gods created a pyramid mound, from which light and the sun rose, and life started.

In ancient Greek mythology, frogs are often viewed in a comical manner. I love sharing some of these myths with my son before he visits dreamland.

For example, there’s the story of the frogs asking Zeus for a king. Firstly, Zeus gives the frogs a log to be their king, but then the amphibians all complain that their “king” is dull.

Zeus then decides to appoint a heron as the king of the frogs, and guess what? The heron eats all the frogs. So think again before you complain…

Are frogs a good omen?

In general, yes, frogs are considered to be good omens. In Irish, Roman, and Japanese cultures specifically, these amphibians are signs of good luck. Even the ancient Chinese believe that seeing a frog meant good fortune! The Bible is one of a few places where frogs are seen as negative in the plague of Egypt.

Are frogs a symbol of death?

For native American tribes, frogs are a symbol of death in a sense. When we change or transform, the old “us” dies, giving the new “us” a chance to be born. Thus, for these tribes, frogs symbolize change, transformation, and a spiritual link to nature.

What do frogs mean spiritually?

In spirituality, frogs are viewed as symbols of transformation, purity, potential, fertility, good luck, and prosperity. For some, a frog is seen as a spirit that guides you toward transformation; you need to keep an open mind, embrace change, accept things, and grow.

Having learned something about frog symbolism, I decided to move my frog ornament a bit away from the fishpond, just in case the clay frog ended up in the pond, which would mean I lacked knowledge.

Instead, I placed it near my front door, inviting wealth and opportunity to my home. I also make sure to have a small bowl of water near my frog, which is great for the garden birds.

My home is now peaceful, and I have had a few strange (but wonderful) opportunities come my way. Could it be the bright green ornament that croaks away on my front porch?

Why Frogs Croak — The Answer's Here!

[…] These fascinating creatures are unique in so many ways, from the design of their bodies to their eating habits. Indeed, there’s always something new to learn about frogs. […]

[…] Frogs‘ unusual mating cries are well-known, but why do they scream? […]