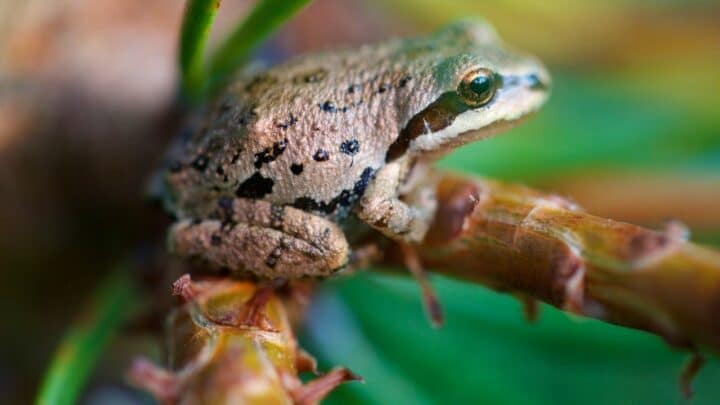 If you are the type of person who is fascinated by owning exotic pets, you may wonder what you should feed your pacific tree frog. After all, it is still a frog, so shouldn’t it be content with flies?

But, then again, it is unlikely that you would want to spend every day swatting flies to satisfy your frog’s hunger. In that case, you would probably be desperately interested in finding alternative meals.

Or, maybe you don’t own a pacific tree frog but are still wondering what these frogs eat, merely out of curiosity.

What Do Pacific Tree Frogs Eat?

Tadpole Pacific Tree Frogs feed on bacteria in algae in freshwater ponds. Once they develop into adult frogs, they will eat many types of insects, including crickets, flies, mosquitoes, ants, beetles, and spiders. Adult Pacific Tree frogs typically search for food after nightfall and catch their prey by using their long, sticky tongues.

Of course, tadpoles have not yet developed tongues to enable them to catch flies and mosquitoes. Additionally, tadpoles survive exclusively in bodies of freshwater, so they are not yet able to reach land and hunt for ants and beetles.

So, they still need to eat something in order to receive the necessary nutrients to grow into full-sized frogs.

While it may not sound like the most appetizing delicacy, bacteria and algae are the only available sources of food for pacific tree frogs while they are still at the tadpole stage.

Although Pacific Tree frogs have a unique appearance, given their telltale toe padding and dark-colored markings, their dietary needs are the same as that of any other frog.

Yes, Pacific Tree Frogs use their tongues to catch flies and mosquitoes in the stereotypical frog fashion.

Pacific tree frogs usually feed at night time, as many other frogs are also known to do. Although flies are often plentiful throughout the day, many flying insects tend to come out after dark.

Even mosquitoes are known to swarm more heavily after the sun goes down. So, it’s no surprise that Pacific Tree frogs look for food during the night.

So, how do they manage to catch flies and mosquitos? Pacific tree frogs have tongues that are covered with a thick, sticky substance.

Once they flick their tongues out towards the swarm of flying insects, the bugs become trapped in the sticky coating, and the Pacific Tree frog enjoys its supper.

If you are the proud owner of an exotic Pacific Tree Frog, you probably won’t complain much about your pet wanting to eat the flies and mosquitoes in your home, but it’s not like you are willing to catch the small flying insects on your pet’s behalf.

So, it is probably a relief to know that Pacific Tree frogs also feed on ants, beetles, and crickets.

While in their natural habitat, Pacific Tree frogs can change color to blend in with their surroundings, so the bugs that are crawling along the ground or that land on the same tree or wall as the Pacific Tree frog will never even notice the predatory frog and are likely to be swooped up by a long tongue before they ever see it coming.

But since Pacific tree frogs are so small, then how do they manage to eat a beetle or cricket that’s almost as big as they are?

Don’t let their tiny bodies surprise you! Pacific tree frogs have the ability to enlarge themselves for the purpose of consuming large insects.

While this alone may be fascinating even to the casual nature lover, owners of pet Pacific Tree frogs may be comforted by knowing that three crickets from the local pet store are a sufficient evening meal for their pet frog.

What Do You Feed a Pacific Tree Frog?

Young adult tree frogs need to consume plenty of food to reach their full adult size. While Pacific Tree frogs do eat flying insects, such as houseflies and mosquitos, they are also known to enjoy beetles, spiders, ants, and crickets.

If your Pacific Tree frog is already a full-sized adult frog, you will only need to feed it a few times per week. Three to five insects per meal will provide the frog with an adequate amount of nutrition. However, younger Pacific Tree frogs that have recently grown out of the tadpole stage will need to eat more often, but the meals should be smaller in size.

See, the answer to this question was probably not much of a surprise. Despite their unique appearance, Pacific Tree frogs are still frogs, and their diet consists of the foods that most frogs are known to eat: flies, mosquitos, ants, spiders, beetles, and crickets.

While Pacific Tree frogs will gladly spend the evening catching flying insects with their tongues when they are in their natural habitats, they are perfectly content with a person handing them a few crickets or beetles as a nighttime meal. 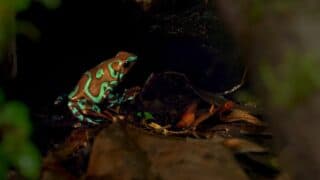 Previous
What Colors Frogs Are — Amazing! 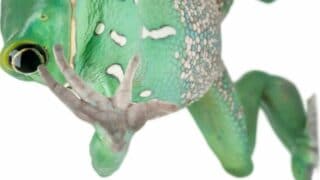 Next
How Many Toes Frogs Have - The Answer

How Many Toes Frogs Have - The Answer

[…] over 5,000 species of frogs, each type of frog has its own attributes that make them unique. Frogs’ feet and hands tell […]