Cat headbutting, sometimes referred to as ‘bunting,’ is when your cat firmly bangs its head against you.

Typically, a cat will press its head against a part of you (bunting) or rub its cheeks on you (scenting).

It’s not just humans that cats bunt. They also bunt inanimate objects such as furniture, flower pots, and walls.

Why Do Cats Headbutt?

Cats do headbutt and use their glands to smear scent on things, including humans. They do this mostly to bond and socialize. Several cats that live in close proximity will bunt to make a colony smell. A cat’s bunt can be a reliable signal that your cat trusts you and accepts you in its group. 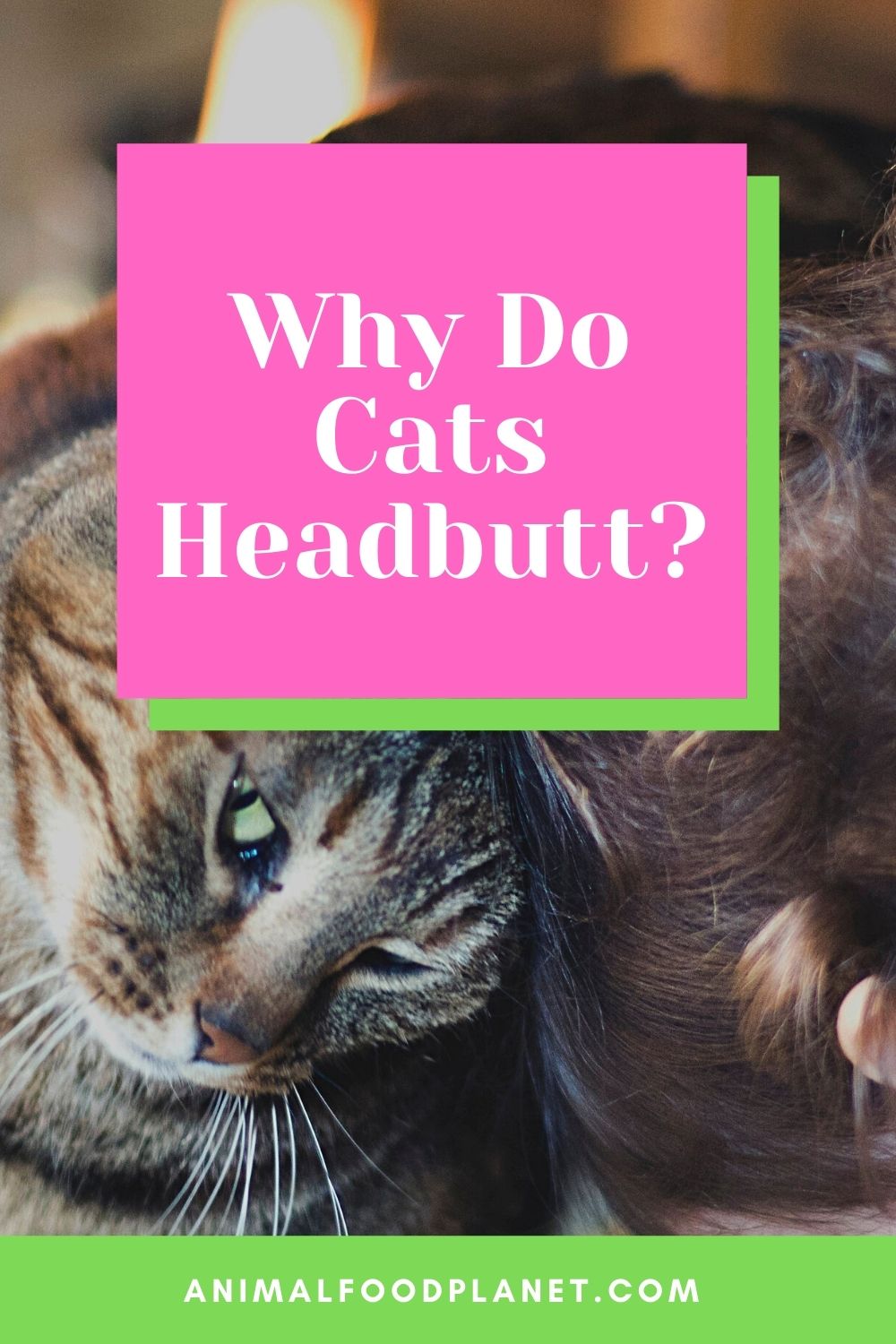 Why Do Cats Headbutt

Did you know that apart from the scent, one of the most important stimuli for domesticated cats seems to be the presence of and social interaction with the owner?

This has been proven in two individual studies published at PubMed.gov and Oregon State University where cats were confronted with different stimuli such as a toy, food, scent, and the interaction with an owner as well as a situation with and without the owner and one with an object that has the scent of the owner.

First, a Word about Scents

Even scents that appear mild to us might be an overpowering odor for cats. This is one of the reasons they are attracted to the kitchen. 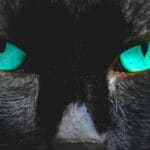 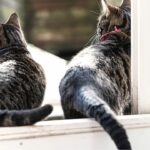 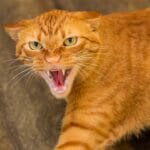 It isn’t necessarily that cats want to eat our food. Often, they are simply curious about the wild array of diverse and interesting smells emanating from there.

Actually, providing your cat with interesting new smells is an enrichment exercise that will be as exciting to your pet as an all-new toy.

If you’re wondering, smell glands on cats’ bodies are in their mouths, chins, forehead, paw pads, and beneath and beside the tail.

Each time a cat rubs its cheeks or flanks, rolls in the dirt, or places its paws on objects, it releases pheromones, chemical signals that only cats can detect.

Pheromones released from glands on top of a cat’s body tend to soothe and welcome, while those on the cat’s rear are usually used to mark territorial boundaries or signal stress.

Second, a Word about Pheromones

Pheromones are chemical compounds created by a single species that alter the behavior or physiology of animals belonging to that same species.

Pheromones aid in reproduction, feeding, interaction with others, and the bonding of mothers to newborns in mammals. 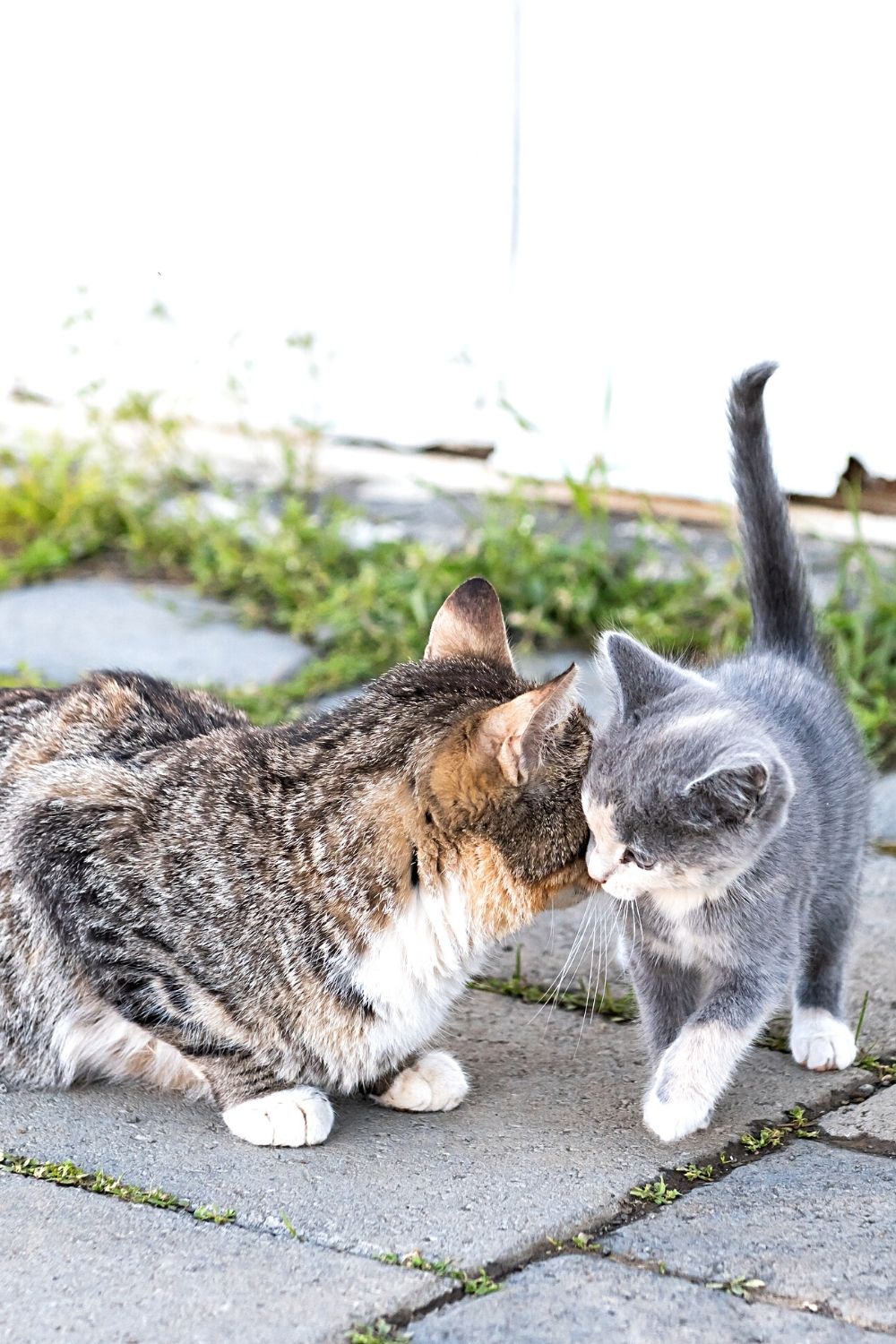 Now that you’ve got an understanding of scents and pheromones, let’s look at cats’ scent-marking behaviors. Oh, hang on. One more thing…

Third, a Word about Affiliative Behaviors

Animals that participate in social interactions with humans (like dogs and cats) can be affected by the presence of strangers.

Nature has provided such animals with some means of identifying ‘friend’ or ‘foe.’

In the case of cats, the means is scenting, which they employ to chemically mark humans as a member of their group. This is known as affiliative behavior. 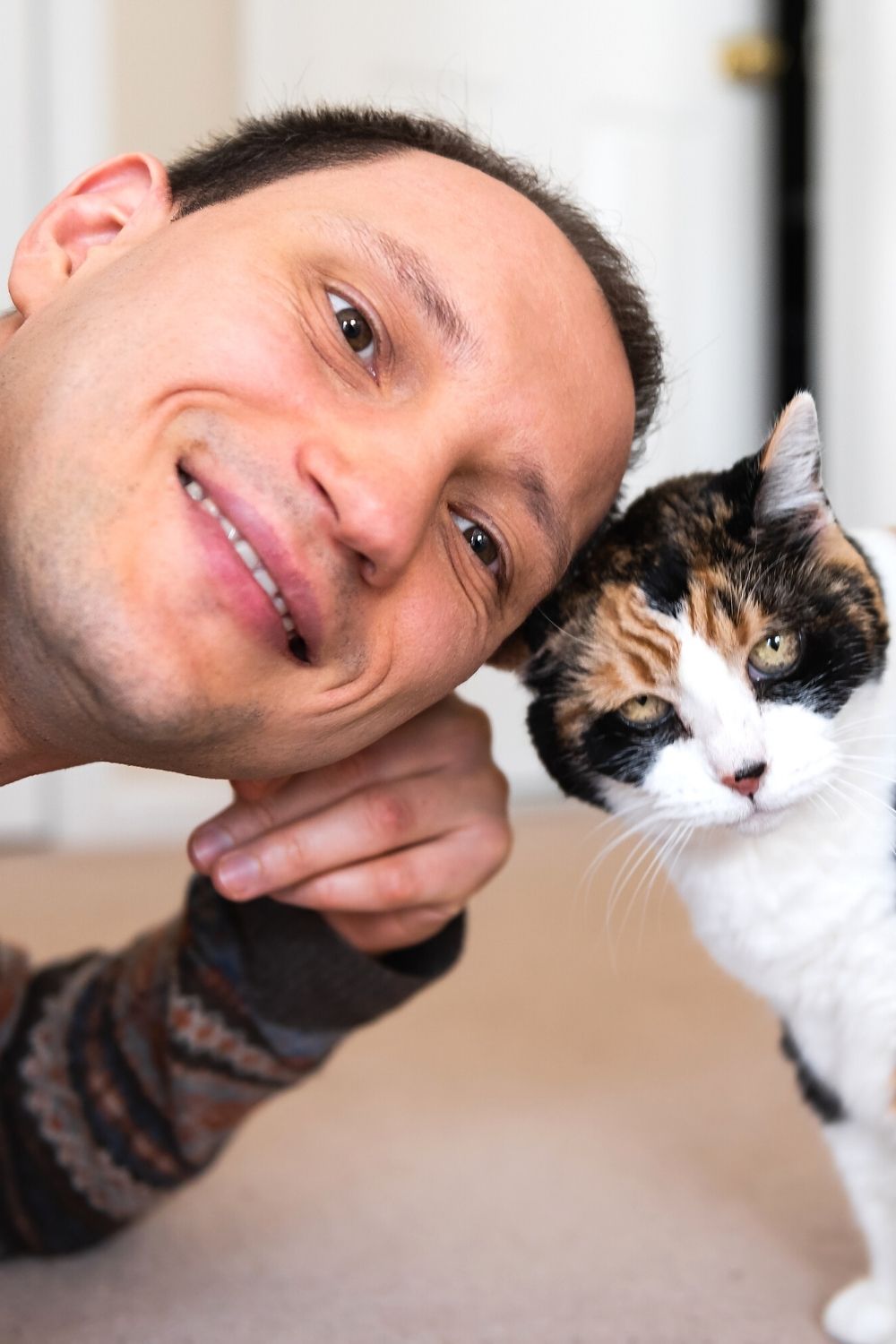 Okay. Now we can talk about cats and scent marking.

Feline faces are soft and fluffy but also chockful of scent glands. Scents are essential for cats (both wild and domesticated) as they help cats connect to – and understand – their environment.

When a cat makes contact with a surface, it presses its scent glands against the surface to release pheromones, which we’ve discussed earlier.

Cats use the scent glands on their foreheads to bunt humans to create a connection through affiliative behavior.

Therefore, when your cat bunts your head, it is deliberately leaving its scent on your face, which, in your natural state, the cat probably finds disgracefully unscented.

Cats Need the Familiarity of People and Places

It might seem odd to realize that your cat’s scent is all over your face right now, but for your pet, it’s comforting!

To the cat, you smell like ‘one of us,’ the ‘us’ being the cat, or if you have more than one cat, the cats. You probably don’t know that your entire home smells a lot like your cat.

In fact, everything in the environment smells a lot like your cat, because that is how the cat knows it is in its environment. 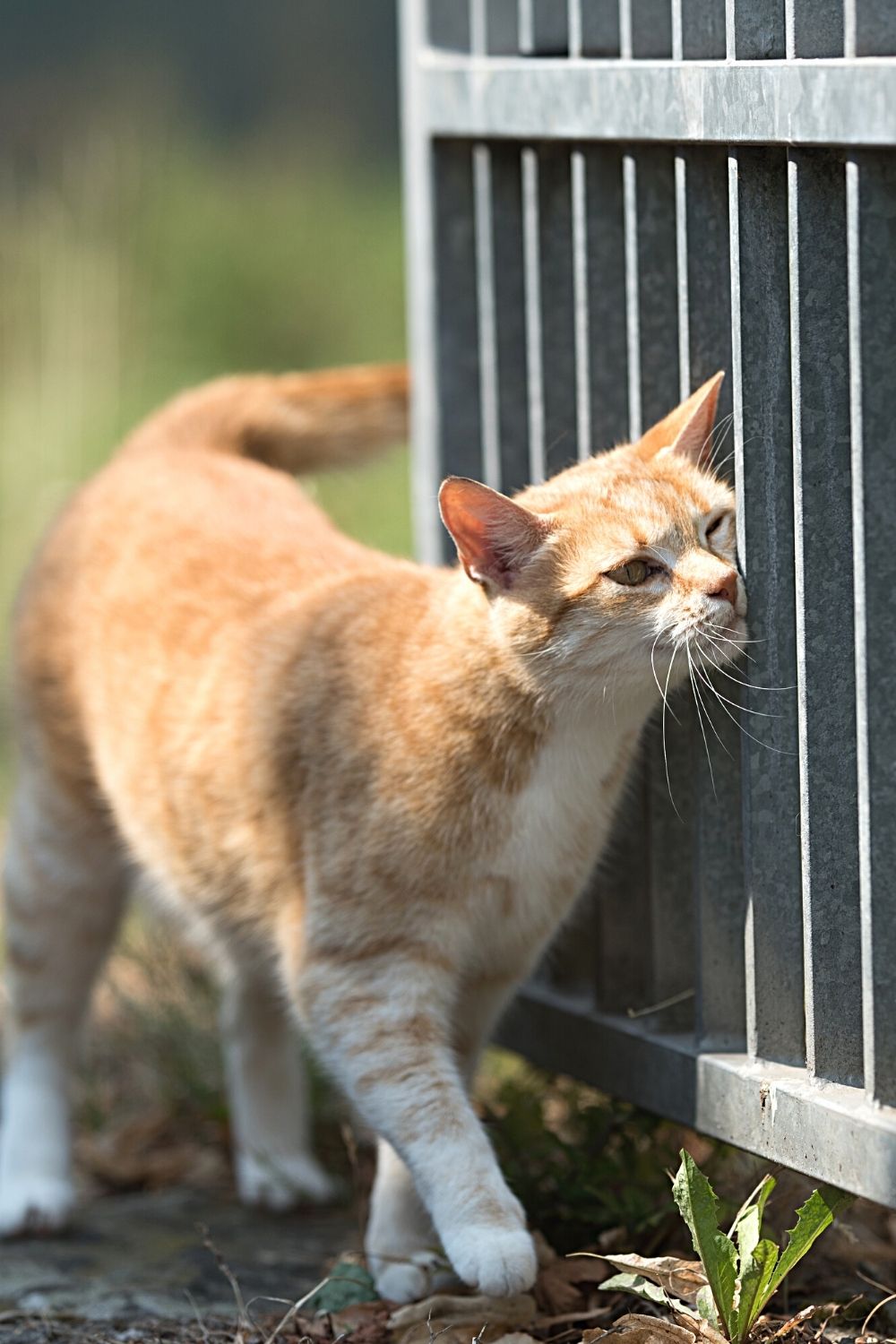 Cats leave their scents in their environment , which includes headbutting, for its comfort

The scent your cat leaves around you and your home keeps it relaxed and happy in its surroundings.

By the way, there is some give and take in bunting.

Just as the cat leaves its scent on you, you also leave your scent on your scent (which explains why cats and dogs are seldom impressed by that expensive new cologne or perfume you’re wearing).

If you share your house with several pets, you’ve probably seen your cat bunting them too, bringing them into its group. 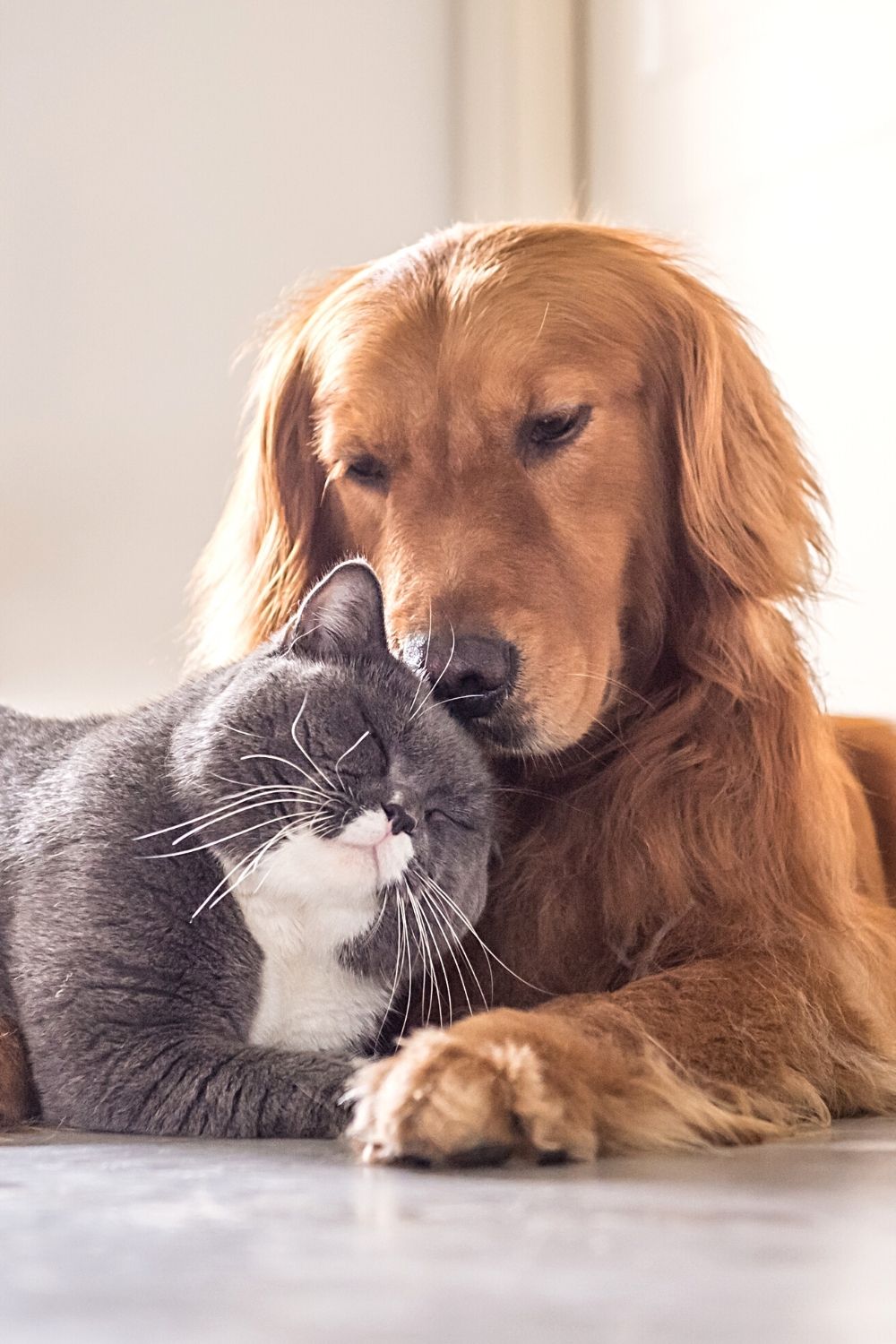 Cats can also headbutt with other pets in your home, which is a sign they’re part of the feline’s group

As days and weeks pass, the cat creates a unique group smell that identifies ‘belong to’ and ‘not belong to’, giving it a sense of belonging and security.

The following behaviors demonstrate that your cat is not a happy camper.

If you see one or more of these behaviors, your cat is not a happy camper, and if it is headbutting, it is actually a display of aggression.

When cats bite in non-playful situations, like when they’re grooming each other. Cats bite when playing.

The bite should be relatively gentle and ought not to draw blood.

When a cat bites hard enough to draw blood, especially when the bite is accompanied by violent scratching, the cat is displaying extreme anxiety, pain, or anger.

Cats will strike out with extended claws for their protection if they feel threatened or scared.

They will also defend their personal space if it is invaded.

Cats will spit, yowl, or hiss when they’re afraid or in danger.

It’s a warning signal that if whatever is frightening them doesn’t cease and desist, the cat will escalate to biting and scratching.

If your cat exhibits one or more of the following body language signals, again, its headbutting is a sign of aggression, not of bonding:

If you notice your cat pressing its head against a solid surface, or into a corner, with its face facing downward, that’s not a sign of healthy bunting either.

It is rare, but have your cat examined by a vet right away if you see it.

Do cats headbutt one another?

It’s possible to observe cats headbutt other cats. This is done to show respect for other cats or create a combined smell with other cats living in the same household. If a cat rubs its cheeks on another cat, both will release pheromones, creating a distinctive group scent.

Should my cat be headbutting human strangers?

Bunting is a bonding behavior that confuses folks when their cats headbutt strangers. Cats are intelligent enough to identify those with whom you frequently interact. Therefore, over time, they will come to see the stranger as an ‘affiliate’ who needs to be scent marked.


Afterword: Why Do Cats Headbutt?

Cats headbutt to scent mark safe spaces, people, and even other animals.

Now that you understand your cat’s bunting, you will probably look forward to its next headbutt.

But what if it doesn’t come?

There are occasions when your cat might not headbutt you for some time.

It doesn’t necessarily indicate a problem, but if it continues for a few days and extends to all objects, you may have to consult a vet.

Read about why your cat is foaming at the mouth next.