There are some cat behaviors that simply pique people’s curiosity, such as cats licking one another.

While there’s not much that you could do with the knowledge of cat behaviors, it can be helpful in better understanding your cat.

After all, cats do communicate their feelings through behaviors and sounds, such as purring and meowing.

When your cat licks you, it’s natural for you to assume that it’s done as a sign of affection.

Do cats lick each other for a similar reason? If so, they must be particularly fond of one another, as cats seem to lick one another an awful lot!

Or, are there other reasons for cats licking one another?

Why Do Cats Lick Each Other?

Cats usually lick each other as a means of bonding with one another through mutual grooming or allogrooming. Mother cats lick newborn kittens due to the same reason. Surprisingly, licking can be used to exert dominance over other cats and is occasionally a form of aggression. 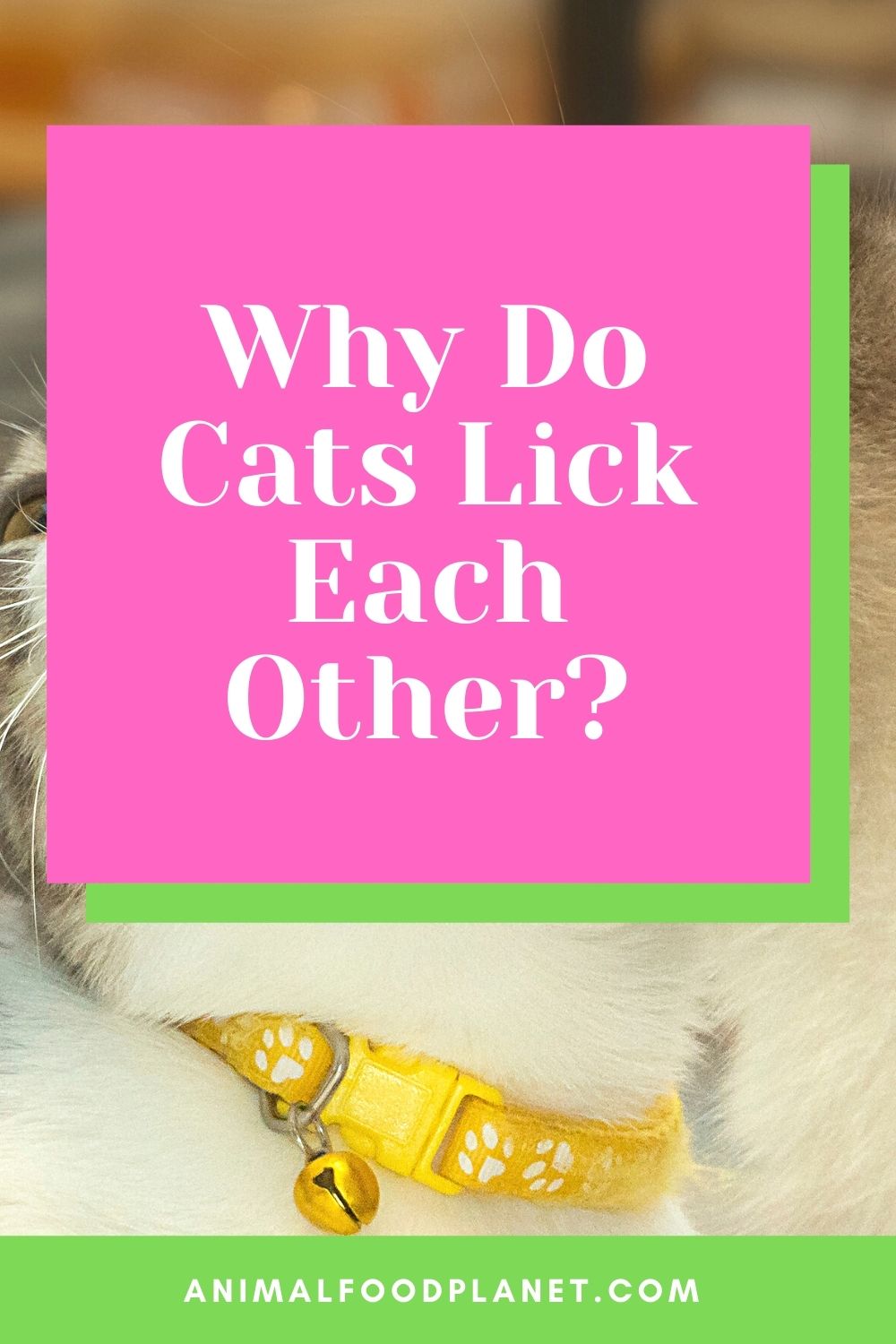 Why Do Cats Lick Each Other

Cats Lick Each Other for Hygienic Reasons

Every cat owner has likely witnessed their cat licking themselves on multiple occasions. While cats do seem to be self-absorbed, they don’t constantly themselves out of pure cat narcissism.

No, they do it to clean themselves.

And cats do a terrific job at handling their own hygiene. Even though you may want to trim your cat’s nails occasionally or take them to a professional groomer, they are perfectly capable of keeping themselves clean. 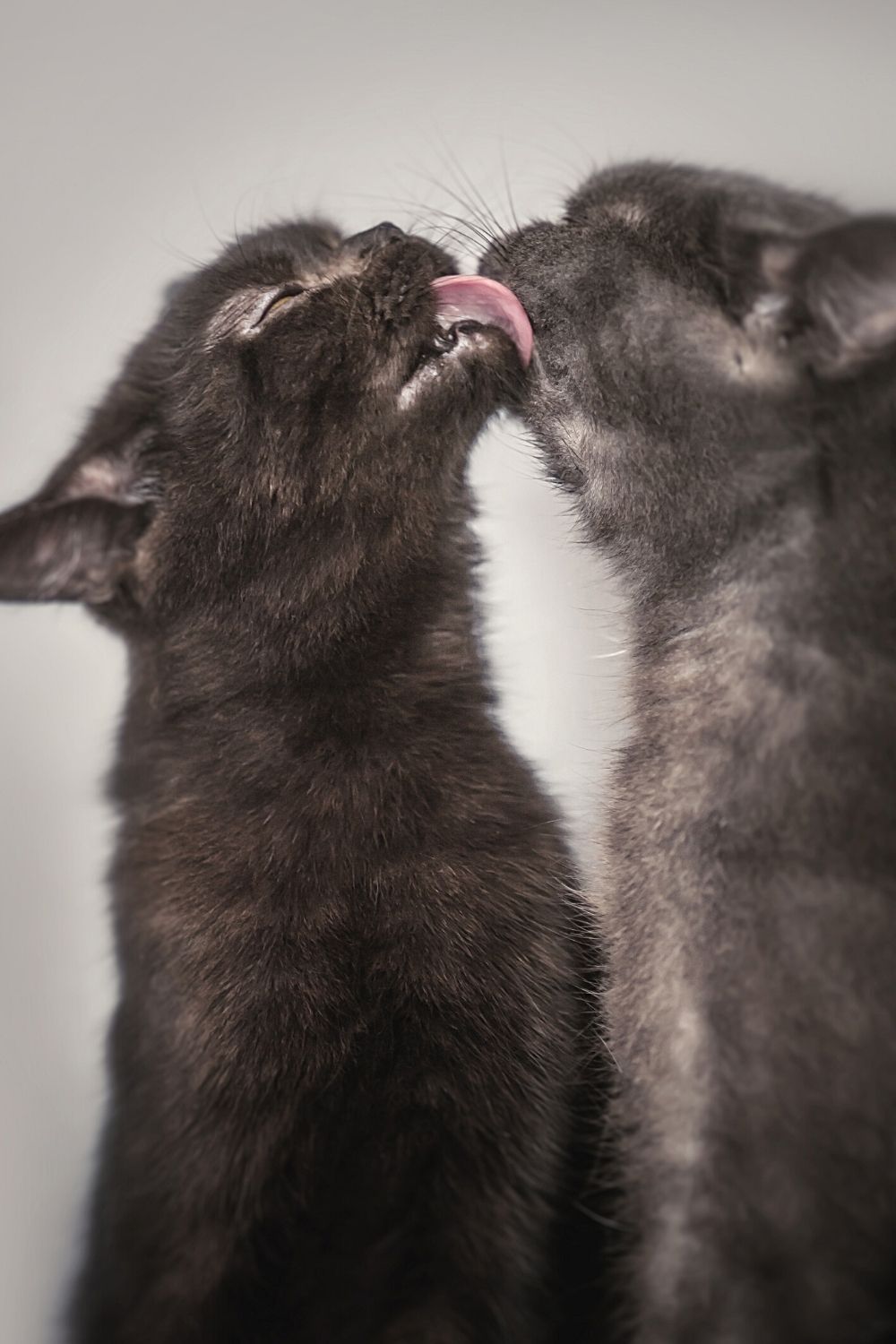 The fact that cats are independent and low-maintenance is a huge reason for people choosing them as pets.

Although cats can groom themselves without your help or the help of another cat, they do have a tendency to lick one another, including their toes, to aid each other in grooming.

Of course, another cat can reach certain places they can’t reach when they’re on their own!

Since cats don’t really need another cat’s assistance in grooming, there has to be another reason for them licking each other.

And yes, that reason is bonding and displaying affection.

You know how it’s always nice to receive a massage or have your hair played with by someone else? The same goes for cats. 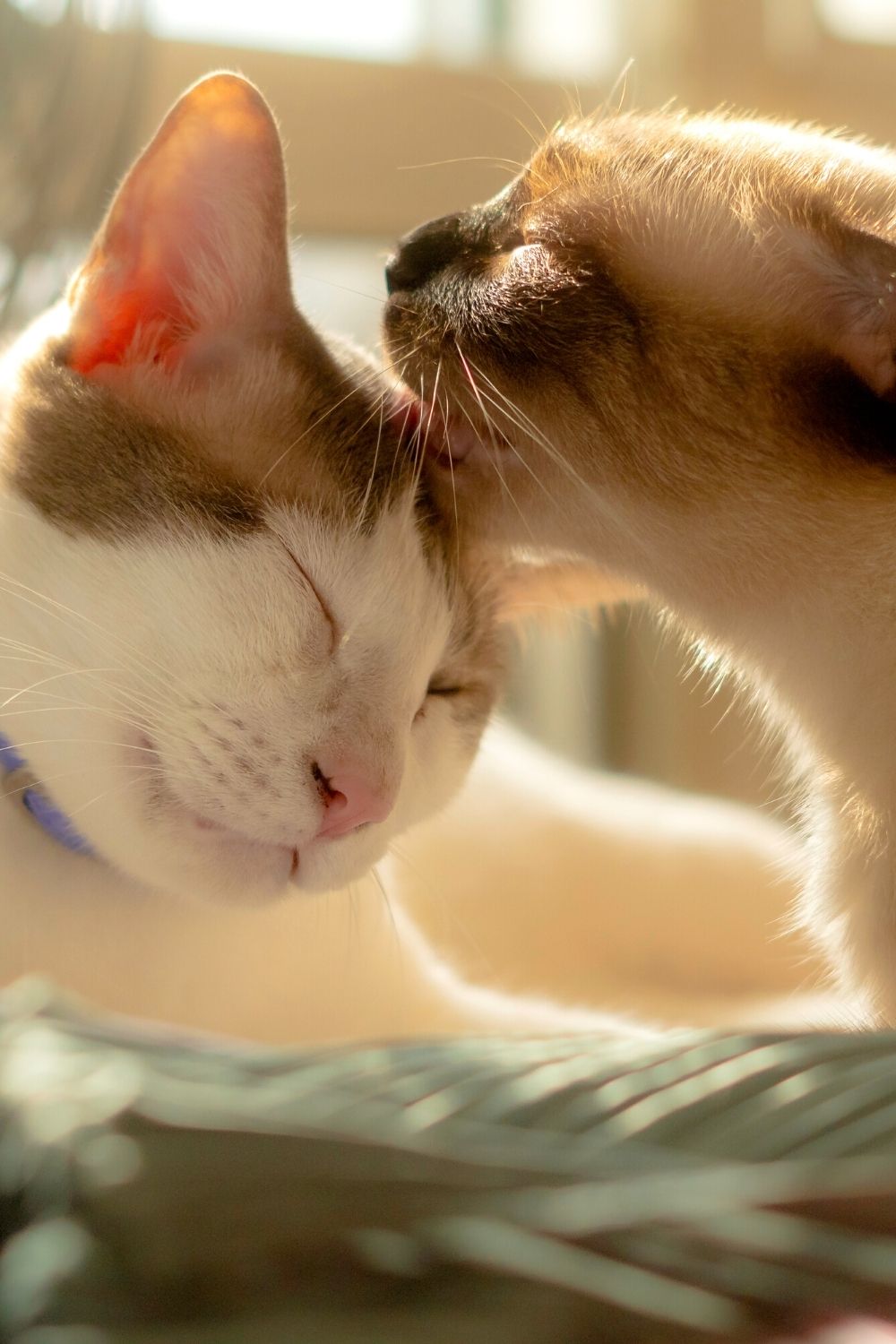 While it’s unlikely that you are trying to bond with your hairdresser or masseuse, you would probably agree that these kinds of touches make you feel closer to your significant other.

So, when cats lick each other, it strengthens their bond and just plain feels good — in the same way that kisses and hugs feel good to people.

When cats lick each other, it’s often done to show that they care.

While felines do have a reputation for being solitary and independent, they are known to bond with one another. Just think about how stray cats group themselves into colonies.

Cats do enjoy their time alone and are capable of self-sufficiency, but they do have the ability to bond with other cats — and their human owners.

Mama Cats Lick their Kittens for Cleansing and Bonding Reasons

Mama cats with a new litter of kittens are a perfect example of the reasons that cats lick each other.

When a kitten is first born, the mother will immediately begin licking them to clean the birthing debris off them and start bonding with her new litter. 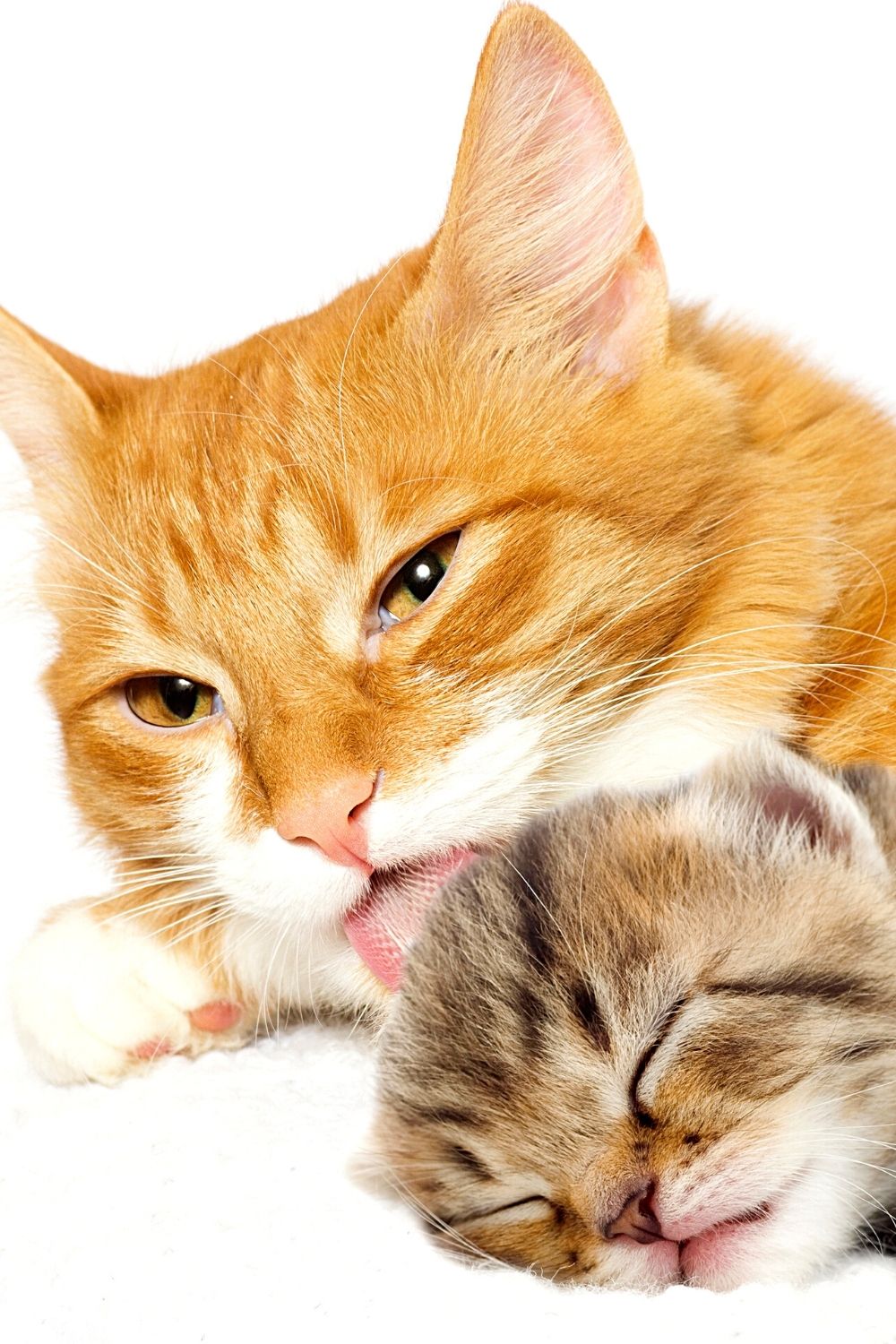 Mother cats lick their kittens to clean and bond with them

Cats continue to exhibit this behavior towards one another when they get older.

But Mama cats have other reasons, too. When a baby kitten is licked on the tummy by their mother, it prevents constipation and helps them digest their mother’s milk.

Also, Mama cats tend to actually eat the placenta and blood that they clean off their newborn kittens.

While even the thought of this probably makes your stomach turn, the nutrients from the birthing debris give the mother enough strength to take a break from hunting to care for her young.

Cats May Lick One Another as a Form of Aggression

You may have witnessed — and been confused by — two cats licking one another and then suddenly turning around, biting and fighting.

OK, so do they really love one another or not?

Occasionally, dominant cats may lick cats that they don’t truly get along with.

Sometimes, this could be a peace offering and an attempt to bond with their enemy, but other times, the cat may have ulterior motives.

If you pay close attention to the cats’ positions when they are licking each other, you may notice that one cat poses in a more dominant position, while the other cat submissively lays there in a vulnerable position. 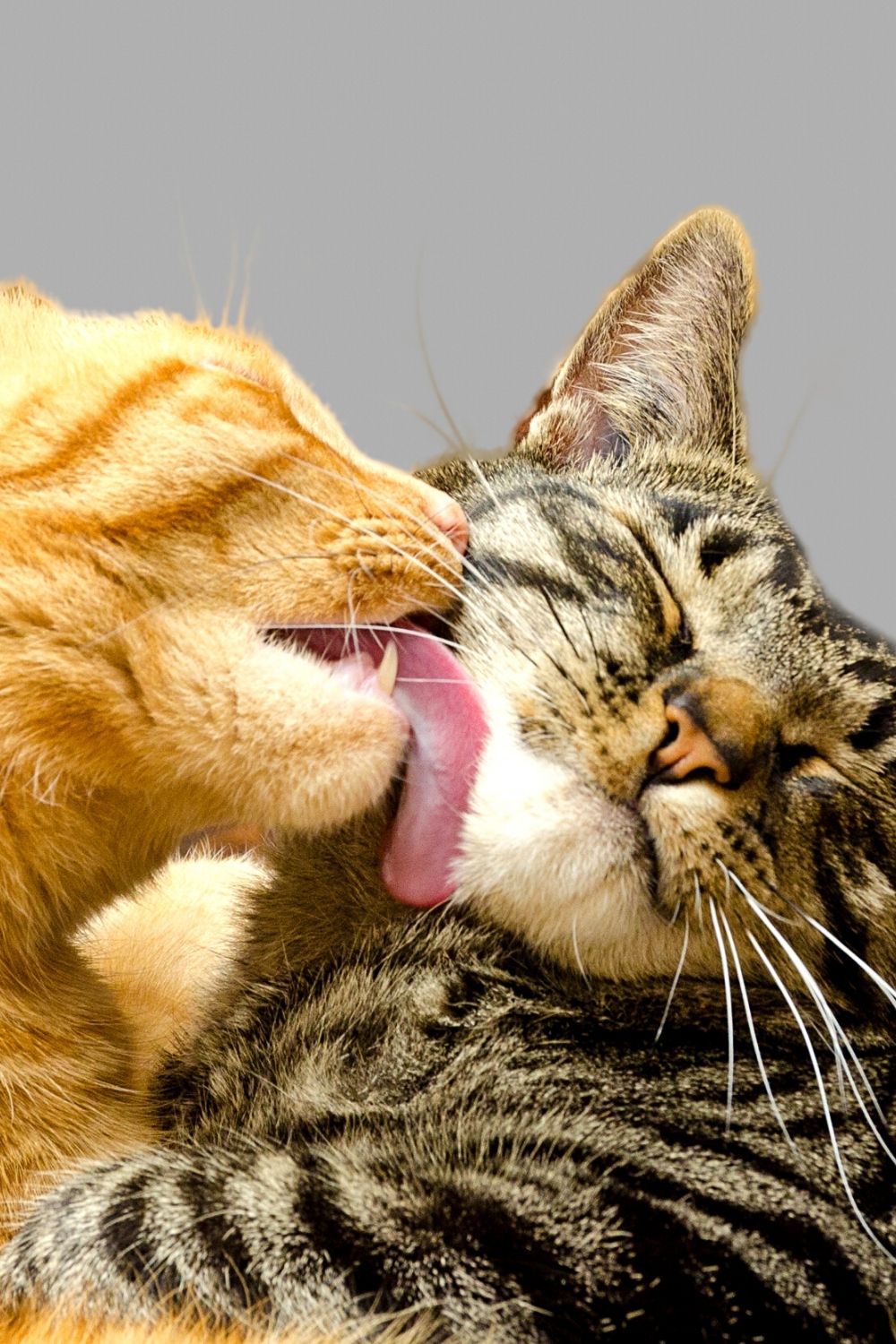 Cats licking each other is another form of aggression

Cats may occasionally groom another cat to exert power over them. While they may inadvertently bond with one another through licking, this isn’t always the case.

Sometimes, they’ll break out in a fight following the licking session.

Frequently Asked Questions about Why Cats Lick Each Other

Is it okay to let cats lick you?

It’s fine — and perfectly safe — to allow your cats to lick you, as long as they don’t lick you on the nose or mouth. Remember, cats often lick themselves and one another for hygienic reasons, and when they turn around and lick your face afterward, they pass that bacteria onto you.

What causes cats to lick excessively?

Licking is a normal cat behavior typically done for bonding or hygienic reasons. But excessive licking is a sign of a health condition or a response to high-stress levels. Have a veterinarian check your cat, especially if it starts developing bald patches.

Why do cats lick their owners?

Most likely, your cat doesn’t lick you because they think you’re in need of a bath! You’d probably be relieved and comforted with the knowledge that your cat is indeed licking you as a sign of trust and affection.


Afterword: Why Do Cats Lick Each Other?

While cats do indeed lick their owners to show affection, they do have other reasons for licking each other.

Often, cats do lick one another as a form of bonding, but they also do it for cat grooming purposes, too.

Although you shouldn’t be overly concerned about a catfight breaking out after licking sessions, occasionally licking may be a form of aggression.

Most likely, if you notice your cats licking each other, you can simply smile and let them be. After all, you probably want to see your cats bond and show affection to each other.

If there’s nothing else, at least you’ll know your cats are on top of their hygiene!