3 Reasons Why Cats Groom Each Other and then Bite 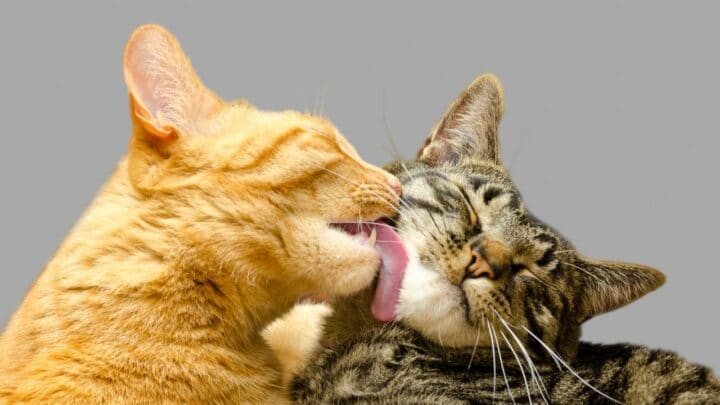 Surely, the cat lovers out there will agree: Cats are amazing pets! However, there are some odd cat behaviors that can make a cat owner scratch their head in bewilderment.

Many cats will turn around and suddenly bite another cat moments after the two are grooming each other.

OK, so one second they seem to be loving each other and the next second they’re fighting! Huh?

Well, it’s not necessarily a sudden switch from affection to animosity. While there are a few explanations for the shift from grooming to biting, most likely the two cats are indeed compatible.

Let’s unravel the mystery behind this strange cat behavior…

Why Do Cats Groom Each Other and Then Bite?

Often, this is simply a way of one cat communicating to the other that they are finished with the grooming ritual. However, cats do bite each other while they are playing, so this may be a shift from affection to playfulness. Sometimes the biting is connected to the grooming, as one cat may have debris trapped in its fur.

Cats May Bite to Communicate That the Grooming Routine Is Over

Do you know how your partner loves it when you give them a back rub? They want you to keep going, but eventually, your hands become tired and you tell them that the massage is over for now.

They may protest this by telling you to keep going for just a few more minutes because it is feeling so good. Maybe you’ll give in for a couple of minutes, or maybe you will insist that you are done.

While it is doubtful that this would result in a fight, it may cause a brief, minor conflict.

This scenario is very similar with regards to cats grooming one another. The grooming provides an opportunity for bonding and assistance in caring for hard-to-reach places.

Although grooming is a hygienic routine for cats, it still feels pleasurable when another cat does the grooming for them. It’s the same way that humans feel good when another person brushes their hair.

However, all good things must come to an end, and a cat can’t verbally tell the other cat that they are tired of cleaning up fur, so they bite to communicate that enough is enough.

On the flip side, the lucky cat who is the recipient of the grooming that day may be wondering why the other cat became distracted and stopped, so they may bite to say to their fellow cat, “Hey, that was feeling good! Keep going!”

Either way, the bite effectively gets the message across.

Cats May Bite After Grooming as a Shift to Playfulness

While cats may very well bite each other to be territorial, especially when referring to unneutered male cats, this scenario is highly unlikely since the two cats were grooming each other moments before the fight broke out.

Additionally, since grooming is a form of bonding, it is also unlikely that biting is a sign of aggression. Obviously, the two cats care about each other and get along, or else they wouldn’t have been grooming one another in the first place.

This then leads us to the next plausible explanation: playfulness. Cats bite each other, chase, pounce, and scratch when they are playing, as all forms of cat play are based on hunting and aggressive behaviors.

No, it is not an actual catfight. They are doing it all in good fun.

Remember that since cats can’t talk, biting during grooming is a way to communicate, but sometimes that message may get crossed, and the bitten cat may interpret the bite as a way of the other cat saying that they want to play.

And so, the mock fight breaks out!

As long as your cats aren’t exhibiting other behavioral signs of aggression such as an arched back, hissing, and a stiff posture, there is no need for you to become concerned and attempt to break up the fight.

The cats simply switched gears from grooming to playfulness, so let them enjoy the good time that they are having.

Cats May Bite Each Other as Part of the Grooming

So, licking one another’s fur is hygienically enhancing the shine as far as your cats are concerned, but what about that little spot of matted fur that has a sticker trapped in it?

Well, they’ve got to remove it somehow, so that they can look their very best! Why not bite it out?

Sure, you could just grab a pair of scissors and help your cats get the job done, but they don’t know that. Cats are independent and meticulous about their grooming habits.

When was the last time your kitty pal asked for your help with grooming? Probably never.

However, they will turn to a fellow cat whom they are comfortable with for a little grooming assistance, and when the other cat notices debris trapped in their friend’s fur, they remove it the only way they know how to bite.

Is it normal for cats to bite while grooming?

Absolutely. Cats will lick and nibble their fur or the fur of a fellow cat during the grooming routine. When cats groom one another, it is not common for bites to occur post-grooming.

Why do cats bite the other feline’s neck while grooming?

A cat’s neck is one of those hard-to-reach places that may not receive much attention until another cat assists. This increases the likelihood of debris being trapped in the fur around the neck. The cat that is handling the grooming may bite the other cat’s neck to help remove the piece of debris.

Are cats grooming each other a sign of affection?

Grooming symbolizes bonding and affection. When referring to mother cats grooming kittens, it can also be a form of protection. Even adult cats may not be able to reach certain places on their bodies, so they seek assistance from other cats to achieve a thorough cleaning.

So, cats do not automatically switch from affection to aggression. Since grooming is a way for cats to bond, you can be fairly confident that your cats have a good relationship with one another.

The biting after grooming is most likely a form of communication, a sudden change in gears from grooming to playing, or maybe it’s simply part of the grooming itself.

Regardless, there’s no reason to be concerned. When you think about it, this strange behavior makes perfect sense- at least in the eyes of a cat. 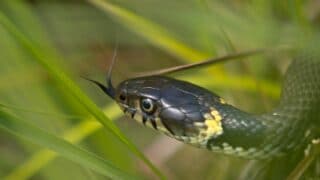 Previous
Why Do Snakes Stick Their Tongue Out? 4 Surprising Reasons 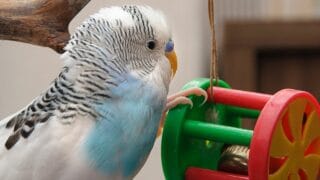 Next
How to Train a Budgie The Pro Way!

Why Does My Male Cat Bite My Female Cats Neck? Umm... Okay!

[…] Cats are amazing animals. However, their behavior can be questionable, especially with other cats in the home. […]