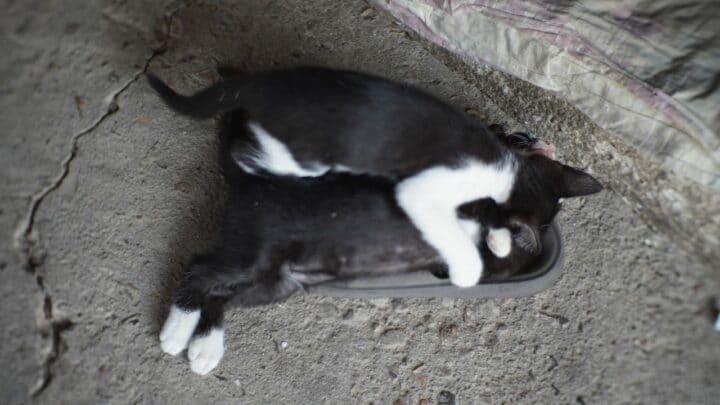 Witnessing cats biting one another’s necks can be a little disconcerting. This violent-looking behavior is sometimes frightening to watch and can seem very predatory.

However, it is pretty standard and mostly not a cause for concern.

There are a number of reasons why cats bite one another on the neck, and few of them have to do with aggression.

Read on to find out more.

Why do cats bite each other’s necks?

Cats often bite each other when playing, when grooming, or when trying to show dominance. This can become aggressive if they are fighting over food, toys, or attention. Younger cats sometimes bite one another’s necks when they are learning to hunt. Male cats may bite female cats’ necks when mating.

How To Know If My Cats Are Fighting Or Playing

Sometimes cats play rough, especially when they are younger. It is normal for them to go for each other’s necks and include a little clawing, hissing, and yowling.

When cats play, it is also usually head-to-head, in which case necks are easy targets.

Generally, this behavior is more prevalent in adolescent cats and kittens.

It is something they tend to outgrow as they learn boundaries, especially if their neck-biting is met with an unfavorable response. It can, however, continue into adulthood, especially if cats grow up together.

Indeed, sometimes cats even bite each other when they are grooming each other because one becomes overstimulated. This is usually resolved by the recipient exiting the situation.

If the playing looks aggressive, it is worthwhile to consider whether a cat is trying to assert dominance or to lay claim to resources like food, toys, or the attention of its owner.

This can be harmless and written off to one cat putting another in its place, but it can also cause real problems if it negatively impacts a less dominant feline.

If a dominant cat is bullying its companion, set up individual spaces for them. Splitting up their toys, resting areas, and litterboxes may efficiently resolve this issue.

If it continues, consult a professional, as behavioral issues may be at play here.

As most of us know, wild animals go for the neck because it is the most efficient way to take down their prey.

Cats, although domesticated, still retain predatory instincts, and neck-biting can be a sign that they are honing their hunting skills.

This is an instinct. Cats learn how to hunt from their mothers and by watching more mature cats.

Housecats don’t necessarily need this skill, but it is still okay to let them learn it. To them, it’s just part of the growing-up process and is essentially harmless.

Why Cats Bite Each Other’s Necks While Mating

The reason for this is rather uncomplicated. Male cats hold female cats down while mating to keep them in place.

Furthermore, a male cat may choose this tactic for disarming a female to prevent an attack on her part.

Studies have also shown that neck-biting may be a stimulation tactic and that a nip at the nape of a female cat’s neck can release the hormones needed to kickstart egg release.

In addition to this, neutered male cats may bite other cats on the neck out of what is called ‘mating frustration.’

This is to relieve the frustration they may feel when reminiscing about their mating days.

On occasion, neck-biting could be a sign of distress or a medical condition.

A cat may be trying to communicate that it is in pain and is taking this out on another cat by displaying uncharacteristically aggressive behavior.

Sudden and strange changes in a cat’s mood should be investigated.

A number of medical conditions, such as hormonal imbalances, hyperthyroidism, or cognitive issues, can cause episodes of extreme aggression.

Frequently Asked Questions About Why Cats Bite Each Other’s Necks

How can I stop my cats from biting each other’s necks?

The best way to stop one cat from biting another is to redirect their attention, preferably before the biting behavior commences. Sometimes, biting is playful and normal, but it can become harmful if the recipient becomes upset or agitated. Distract the perpetrator cat by entertaining it with something else, and never reward this poor behavior.

How can I stop my feline from biting me?

Some cats like to roughhouse more than others, and often owners are at the receiving end of bites and scratches. The best thing you can do is discourage this kind of behavior by refusing to engage with it. Training a feline to stop biting you takes consistency. Using toys that keep your limbs at a safe distance will also teach a cat what kind of play is appropriate over time.

Is it okay to let my cats play rough with each other?

It’s very natural for cats to engage in ‘play aggression’ from time to time, so it’s alright to let them have their fun. This is especially common with younger cats. Most of the time, they aren’t really hurting each other, but if you witness howling, shrieking, or excessive hissing, it’s best to separate them and discourage them from this kind of play.

All cats are different, and as humans, some are just more peaceful than others.

You may find cats that live together have wildly different personalities and don’t always agree on what constitutes fun playing.

Unless they are hurting each other, it’s okay to let cats do their thing.

Keep an eye on how they respond to each other, though, and if you think something has gone awry, consult your vet. 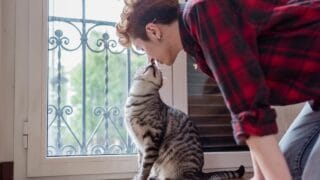 Previous
Why Do Cats Bite Your Nose? Oh, That's Why! 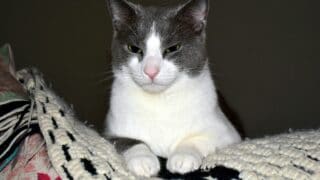 Next
Why Do Cats Knead And Bite Blankets? I See...