Why Do Cats Wag Their Tails While Lying Down?

My Siamese cat is an absolute entertainment to watch.

She walks up and down the windowsill, the tip of her tail wagging from side to side while she decides whether she will bake in the sun or go hunt for birds under the large oak tree in my garden.

When she has decided to lie down, the tip of her tail seems to develop a life of its own, wagging, pausing mid-wag, then twitching, before a sultry swish from side to side.

I am totally fascinated by her. But why does she wag her tail, and why do it when she’s lying down?

Finally, my curiosity got the better of me, and I contacted my local Siamese cat breeder to find out more.

I wondered just why felines wag their tails when they’re lying down, and is it a Siamese thing, or do all cats do it?

Why Do Cats Wag Their Tails While Lying Down? 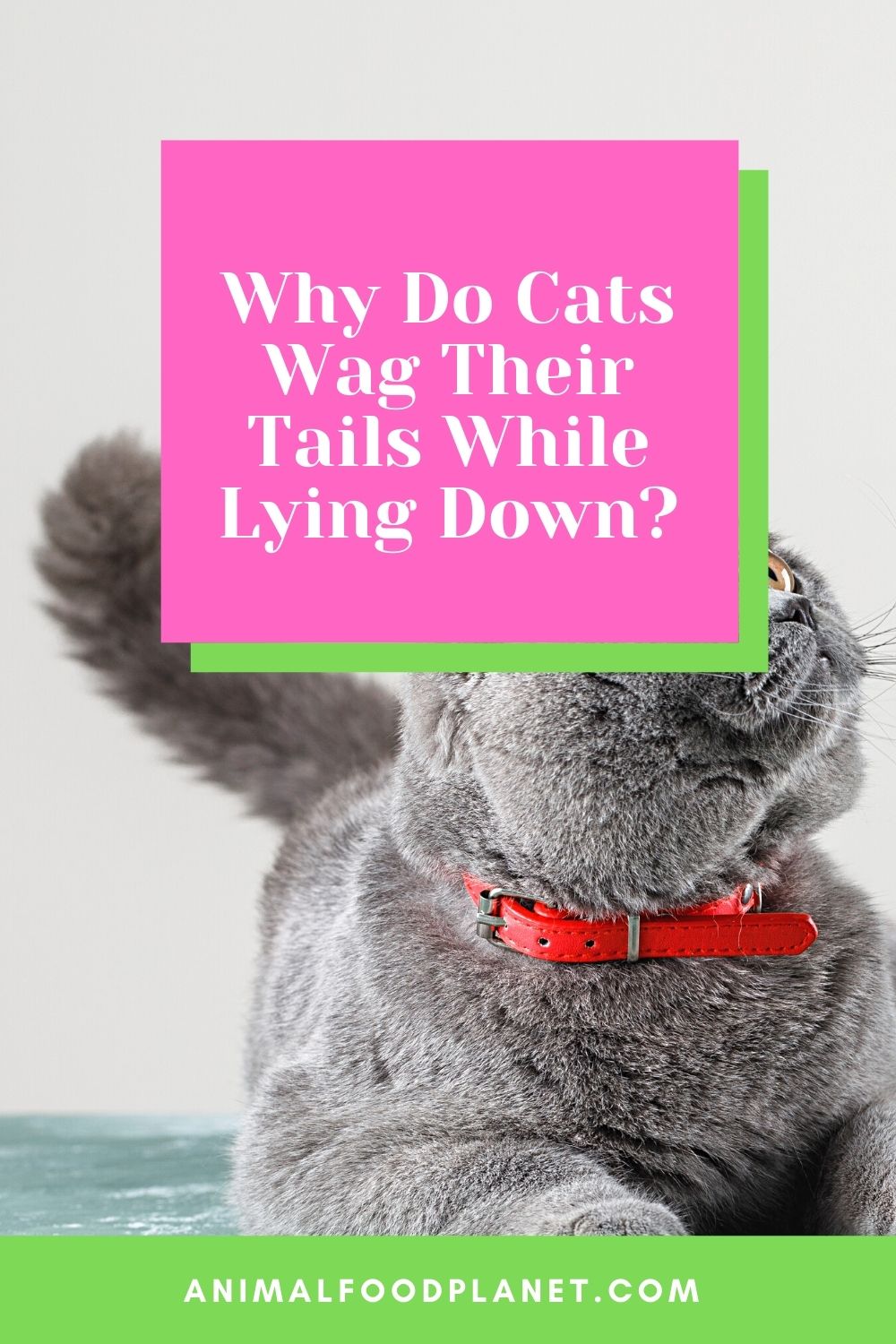 Why Do Cats Wag Their Tails While Lying Down

6 Reasons Cats Wag Their Tails While Lying Down

There are several reasons why cats wag their tails.

Mostly, these reasons involve how your cat is feeling. A cat shows their emotions and feelings with its tail.

A cat that has been startled may display this kind of tail wagging. 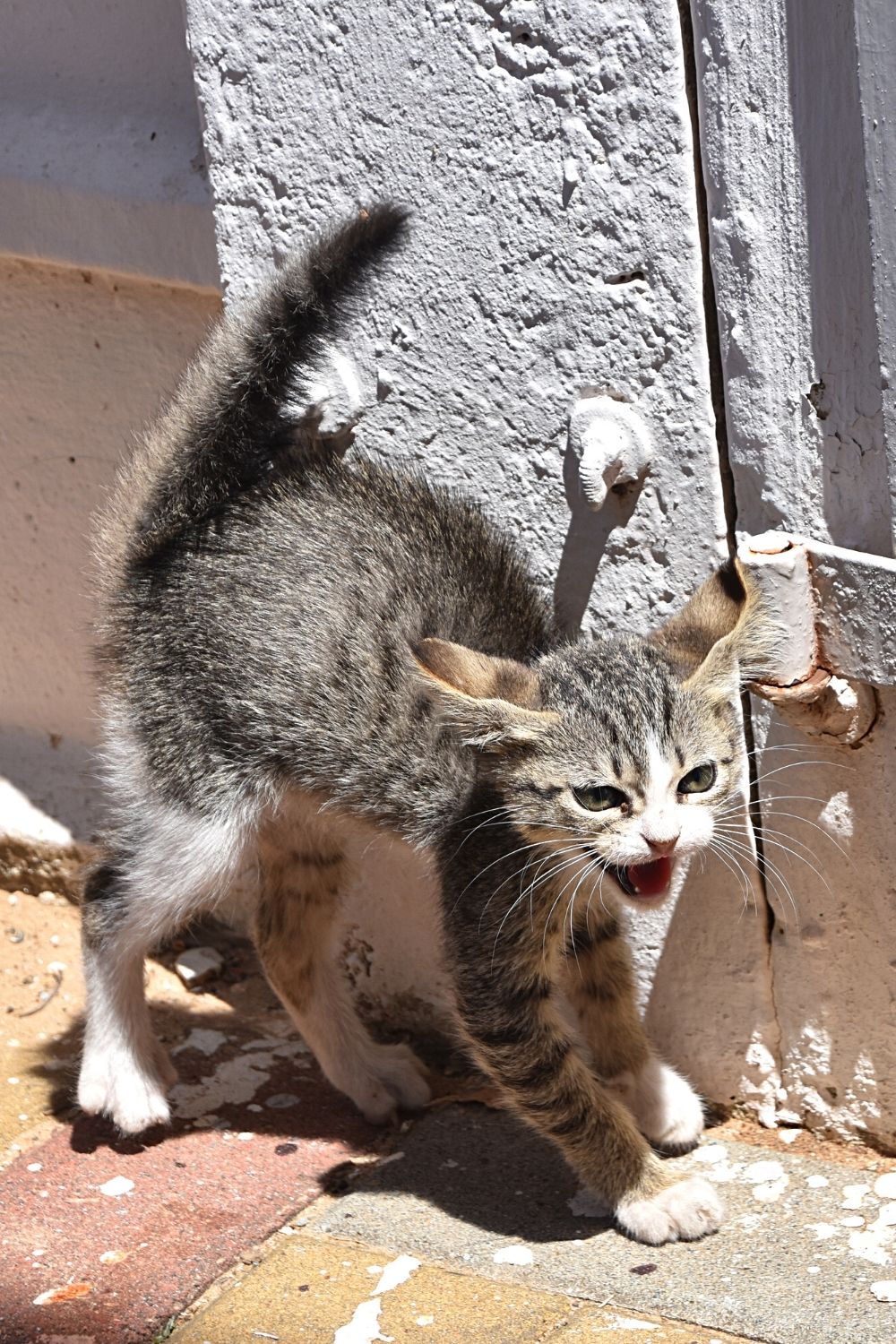 When a cat is afraid, they carry their tail low and closer to the ground, but there may be a slight wag to their tail if they lie down.

This is perhaps the easiest emotion to spot when a cat’s tail wags. A cat that is lying down with its tail wagging quite aggressively may be annoyed with someone. 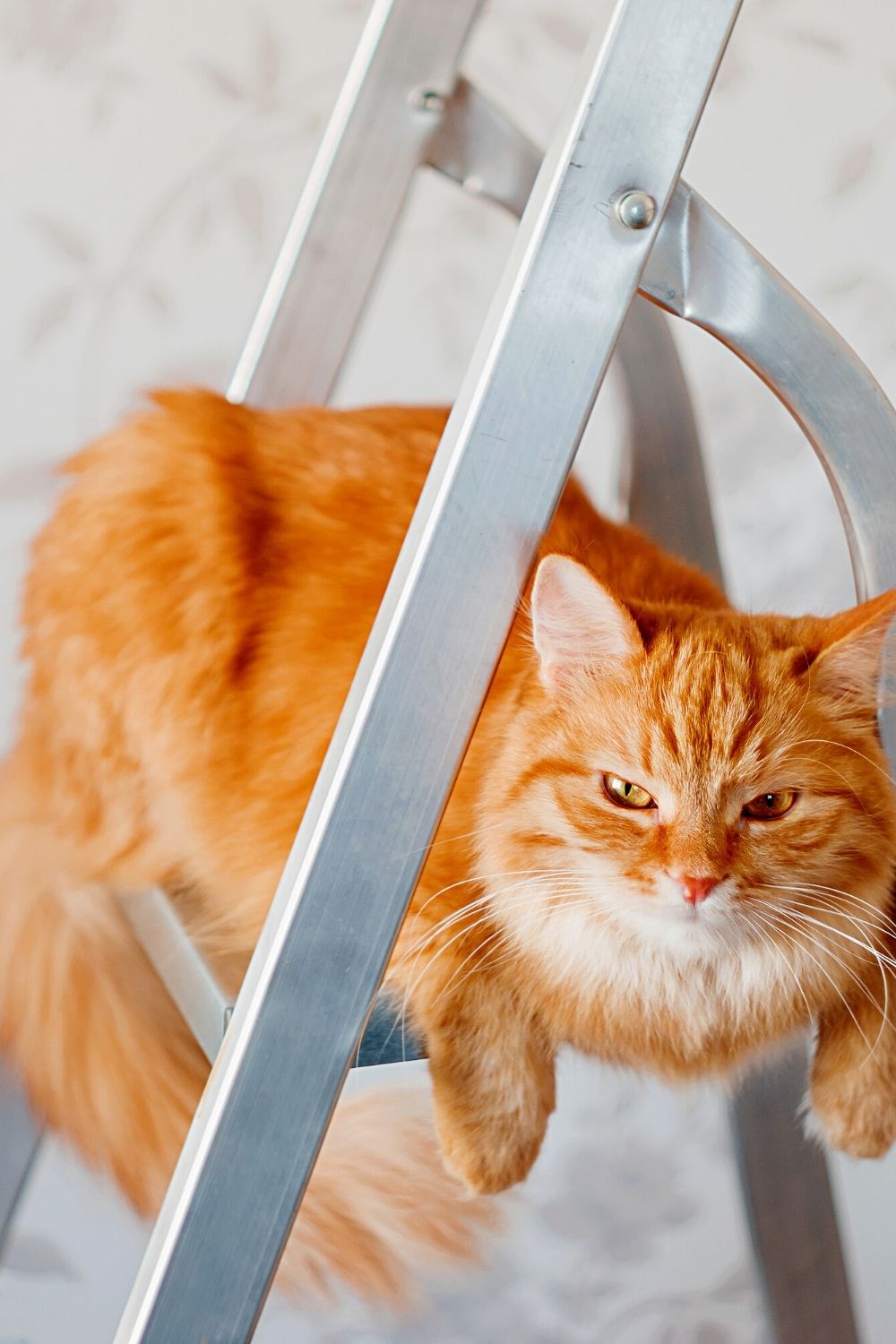 You may have rubbed them too vigorously, and they show their annoyance by wagging their tail in a large swishing motion.

They may even thunk their tail against the surface they’re lying on.

When a cat’s tail wagging becomes erratic or stiff, it can indicate they are in pain.

A cat with an injury may wag their tail and randomly stop mid-motion. 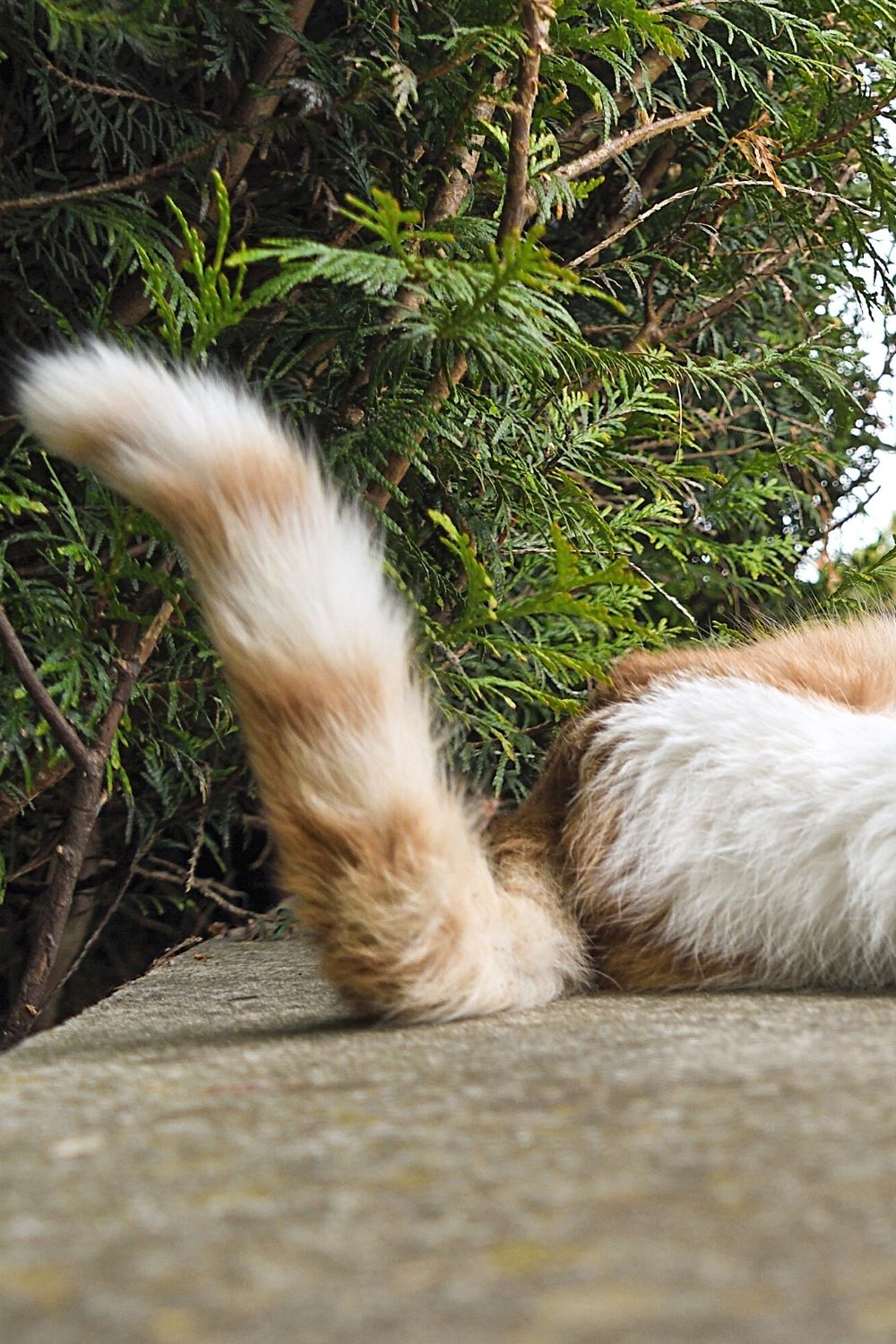 They may also only wag their tail to one side or suddenly stiffen their tail between restless tapping of the tail.

Cats love to sleep, and when they are in a light dream state, the tip of their tail may wag slightly from side to side. 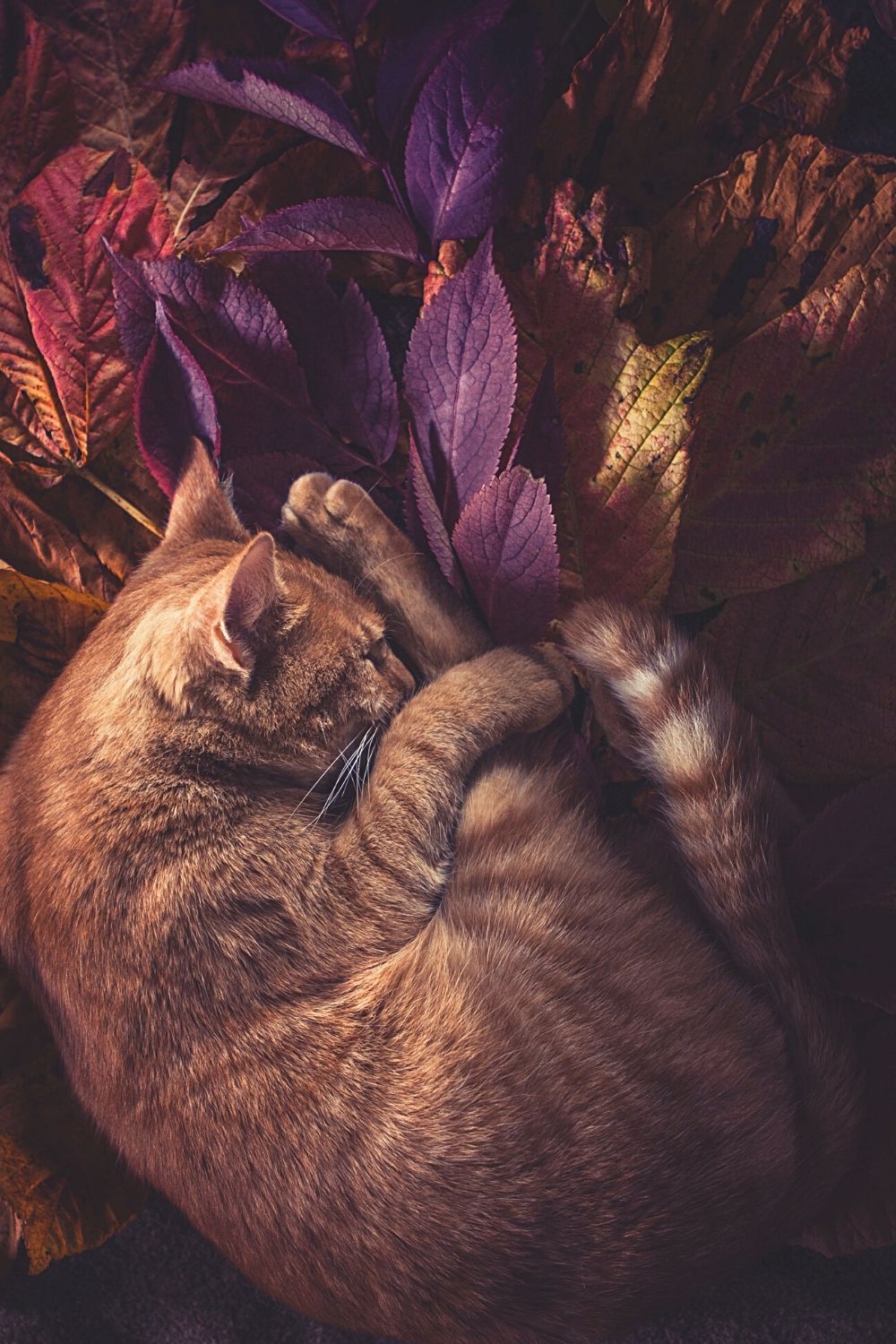 Even when they’re asleep, cats can sometimes wag their tails

Young cats may show a more vigorous wagging since their nervous systems are still developing.

An adult cat’s restful tail wagging or twitching while sleeping is perhaps the equivalent of a human toe-tapping when you are engaged in a pleasurable activity.

Play is an important part of a cat’s development, and they may signal their readiness to play by wagging their tail suggestively. 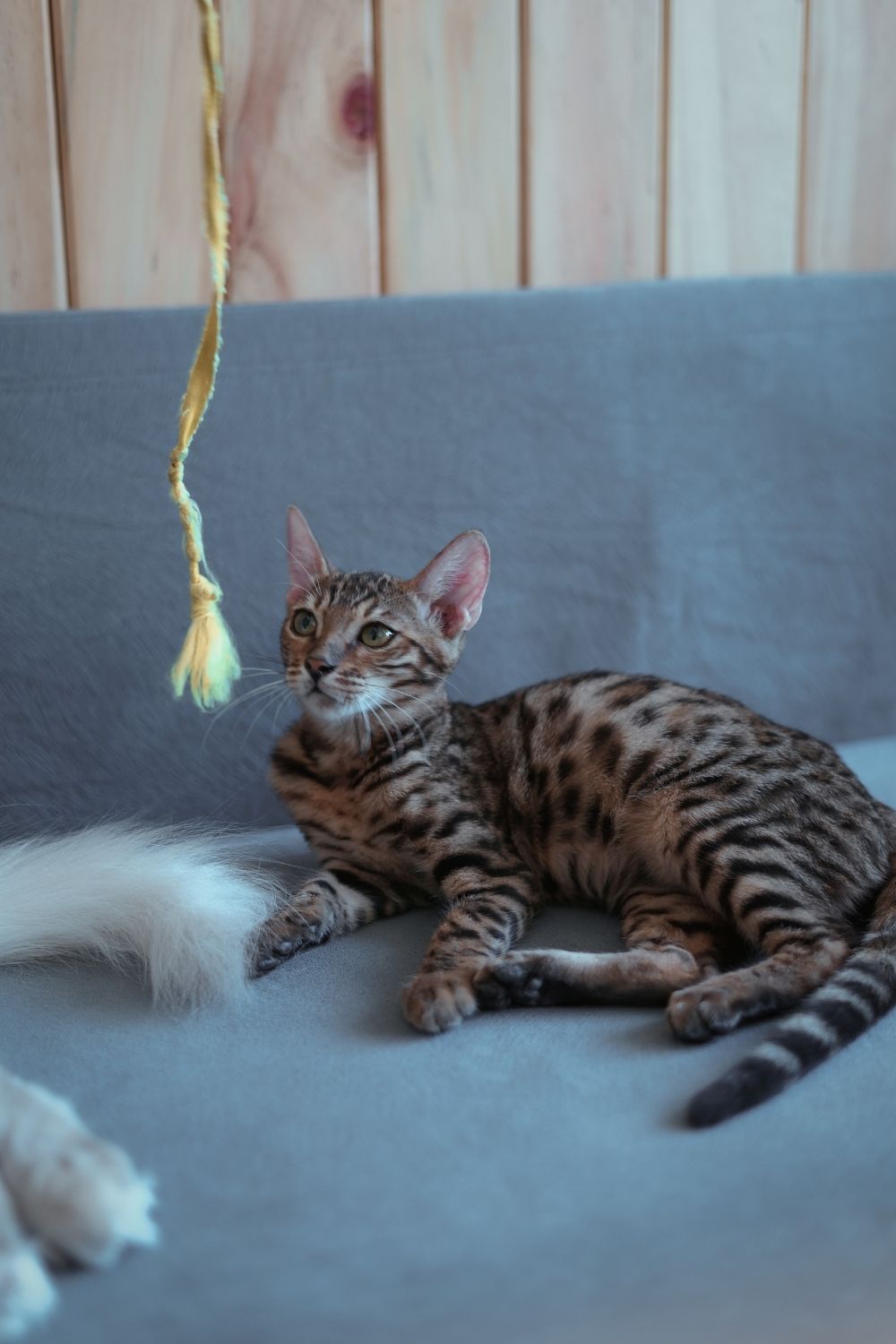 I know my cat often teases me by lying down and just moving the tip of her tail my way (usually when I am working at my PC).

Most cat owners would agree that cats tend not to show happiness like a dog would. After all, a cat is much more aloof than that.

Yet, a cat may wag their tail in a slow and sultry way to show its contentment. 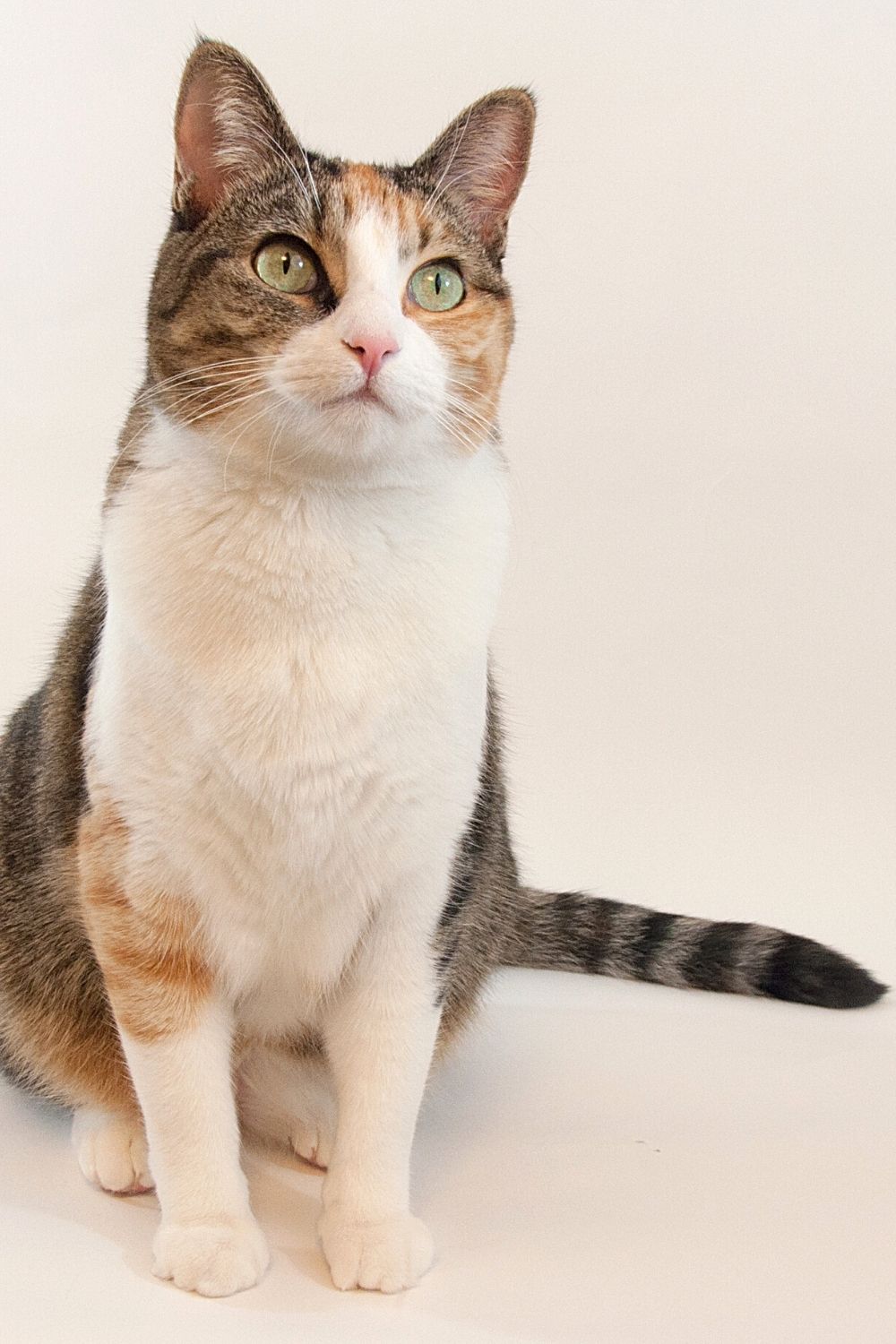 It’s less a wag than the cat simply lifting their tail, vertebrae by vertebrae, off the surface they are lying on and then letting their tail uncurl again.

Why Cats Can Wag Their Tails When Lying Down

I was curious why cats are able to wag their tail in so many different ways when a dog seems to simply wag their tails up and down, or left to right.

The breeder had some great insights, which I found most interesting.

Cats’ Tails Are Not All the Same Length

A cat’s tail length depends on the number of vertebrae that the tail has. Different breeds have different numbers of vertebrae in their tails.

Some species have more, some have fewer vertebrae in their tail, but with most species, their tails make up for 10% of the bones in their bodies.

Since cats have so many vertebrae in their tails, they also have a whole host of muscle groups, tendons, ligaments, and nerve endings that all contribute to an effective network of signals and muscle responses.

This system ultimately results in a highly flexible and maneuverable body part.

Cats can wag all of their tail or only a few vertebrae at a time.

While a dog can wag their whole tail quite effectively, a cat can twitch, twist, rotate, and wag their tail — all thanks to the massive number of nerve endings they have in their tail and spinal column.

With that many nerve endings in their tail, the ability to raise and lower the hair on their tail, and the many types of movements a cat’s tail can perform, is it any surprise that a cat has a highly sensitive tail?

Due to the vast network of nerves, muscles, and sensory input that a cat has in its tail and spinal column, a cat usually dislikes its tail being touched.

I know my own cat hates her tail being touched, and she usually tries to bite me if I DARE touch her tail or playfully pull on it.

When she lies down and I run my hand along her tail, she will swish it in annoyance or tap at my hand with her paws.

Why do cats flick their tails when lying down?

When a cat flicks their tail, it usually indicates annoyance. It’s their sign that you need to get away and leave them so they can have space. If another cat enters their space, the tail flick signals that a fight is about to happen.

Why do cats move their tails when resting?

When a cat sleeps, it often dreams. Their tail wagging while sleeping could indicate they are dreaming, or it could be a sign of the myelination process of their nerves happening in young kittens.

Why is it that my feline wags his tail when I pet him?

If your cat is wagging their tail and rubbing up against you or purring, they are showing they are happy. Their tail wag may coincide with their tail wrapping around your arm or leg to show they are content with your presence.

I love my cat, and knowing that her tail wag could be telling me she’s fond of me too is a really amazing thing.

Of course, I now know that she may also be telling me to leave her alone with an annoyed flick of her tail.

I have definitely learned to read more into my cat’s restless tail and really understand what she is feeling.

Does your cat wag their tail when you rub them, or do they flick it and raise their body hair? Now you can spot the signs you should watch out for in your cat’s tail wag.