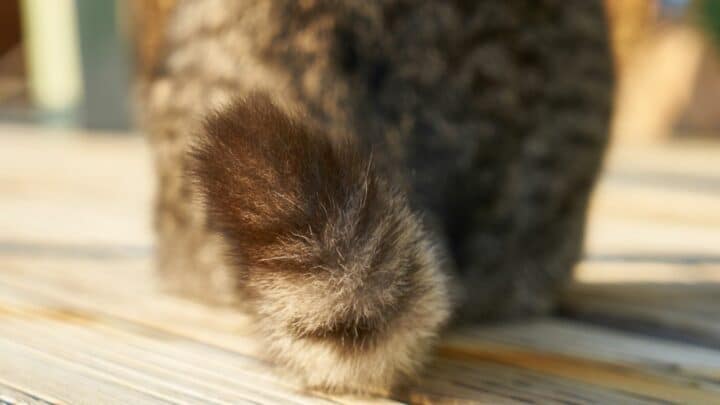 So, your cat absolutely loves it when you scratch their chin or ears, but pulls away the second your hand approaches the base of their tail.

Surely, you have received the message clearly: That spot is off-limits. But why?

You may be relieved to know that it’s common for cats to behave strangely when their tail is scratched. It’s not just you or your cat.

Since your cat can’t tell you why they don’t want you to touch that area, this article will explain this mysterious cat behavior for them.

Why Cats Act Strange When You Scratch the Base of Their Tail?

The main reason is due to the sensitive nerve endings located around the tail base. Touching the tail can also trigger painful mating experiences, especially for female cats. Some may attempt to spread their pheromones or may expect to be cleansed. An alternative medical explanation for this behavior is feline hyperesthesia.

This is the #1 reason that cats don’t enjoy having their tails scratched.

Although some light scratching of this area may be momentarily enjoyable for your cat, excessive overstimulation of the nerves can cause your cat to experience pain.

This is why your cat may emit a high-pitched yelp or even try to bite you when you attempt to scratch the base of their tail.

Simply put, you are causing your cat to feel pain rather than experience pleasure.

However, some responses, such as your cat raising their butt, may be difficult to decipher.

While one minute you may think that your cat is enjoying the tail scratching, the next minute they are nipping at you.

Your cat’s individual level of tolerance for being touched in the tail area is unique to them.

It may be best to avoid this area altogether, or your cat may be able to withstand some light tickling near its tail.

While this explanation may sound odd, it is true, especially of female cats. When cats mate, the male cat commonly mounts the female near her tail base.

Therefore, this area is classified as being a highly sensitive erogenous area for female cats.

Although you may think this would make this area the most pleasurable place for a female cat to be touched, mating can actually be uncomfortable and even painful for female cats.

When you scratch a female cat near the base of her tail, you create sensations that are reminiscent of the mating experience.

Just as dogs spread their scents by urinating on trees, cats do the same when they rub against furnishings.

When you scratch the base of your cat’s tail, they may begin to raise their bottoms to grant you access to the scent gland that is located near their tail.

This may sound strange within itself, but it is a primal instinct of animals to spread pheromones as a way of staking their claim to property.

Although cats have multiple scent glands throughout their bodies, the gland near the tail is especially rich in pheromones.

They Expect To Be Cleansed

When mother cats care for their litter of kittens, they often thoroughly cleanse their kitten’s buttocks and lick the area to initiate a bowel movement.

Although you are a human owner and not a mama cat, when you stoke the base of a cat’s tail, they may be reminded of their mother’s caregiving methods and raise their buttocks with the expectation of being cleansed.

Yeah, this knowledge may result in awkward moments in the future or, more likely, even cause you to begin to avoid stroking the base of your cat’s tail.

Cats and humans don’t speak the same language, which can lead to an inevitable misunderstanding between you and your cat.

Since it is common for cats to behave strangely when their tails are scratched, you don’t necessarily need to book an appointment with your local veterinarian just yet- unless there are other symptoms present.

However, there is a condition known as feline hyperesthesia that can cause your cat to act weird when the base of its tail is scratched.

This is a rare neurological condition that can result in your cat experiencing excruciating pain when their tail area is even slightly touched.

Some other symptoms of this disorder include staring, mutilating their tails, dilated pupils, and spontaneously running throughout the house.

If you believe your cat may have feline hyperesthesia, you need to schedule a consultation with a licensed veterinarian.

Do Cats Like It When Their Tail Is Stroked?

Honestly, it depends on the cat, as different cats have different preferences. There are some studies that suggest that being stroked at the base of the tail can be enjoyable for cats due to the nerve endings in that area. However, other research shows that for many cats, overstimulation of that area can cause pain and discomfort.

Most cats prefer being scratched underneath their chin or behind their ears. They are also known to enjoy having their backs gently stroked. However, you should avoid touching their whiskers, paws, and tails due to the number of nerve endings in those areas.

Should I Pet My Cat When They’re Sleeping?

Though it might seem contradictory, you should pet your feline pals while they’re asleep. Cats who are petted while they are sleeping have lower blood pressure rates and lower levels of anxiety and overall stress. Sleeping together with your cat can also increase bonding and a sense of safety.

Many cats behave strangely when the base of their tails is stroked due to the number of nerve endings in that area and sometimes due to simple miscommunication.

However, the tolerance level for being touched near the tail varies between cats.

If your cat doesn’t seem to enjoy being touched there, scratch their chin or ears instead, and don’t take their odd responses personally.

Your cat is just being a cat. 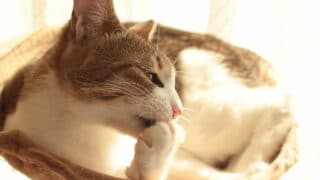 Previous
Why Do Cats Bite Their Claws? That Makes Sense! 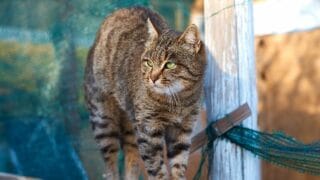 Next
Why Do Cats Arch Their Back? Whoah!