I’m sure you’ve been there too. That moment when your precious kitten decides to dive snout first into their cat friend’s ears, licking like there’s no tomorrow.

This kind of licking seems to go way beyond a simple “help a buddy out” grooming session. In fact, your cat is actually eating the other cat’s ear wax!

At least that was how I felt the first time I witnessed it.

A cat is normally such a fastidious creature, so why would my “madam” kitten start licking another cat’s ear and actually eating their ear wax?

Concerned that there was some dietary deficiency at play, I headed to my local vet for some answers.

Cats groom each other as a sign of affection, a way for cats to bond. While cats simply lick to share scent, they may eat ear wax too since it contains natural proteins. Cats and dogs will naturally lick the ear wax from another cat or dog since it satisfies a protein craving. 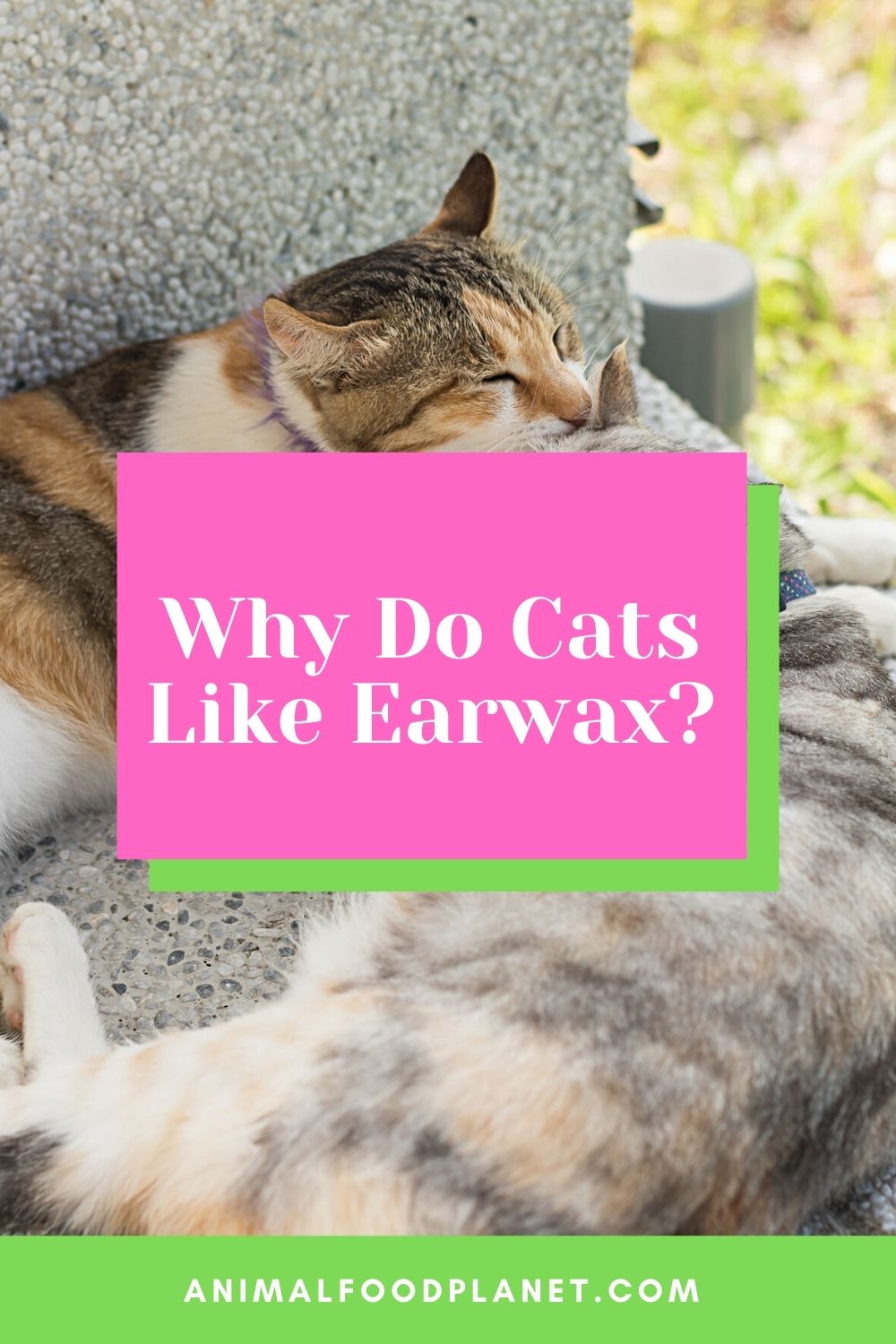 Cats lick to show affection, but wild cats also start their meals by licking a prey animal they have caught.

There are other reasons why cats may lick the ears of their companions (including human ears) if given the chance.

Cats are predators. Genetically, they are programmed to hunt and consume animal flesh.

The scent of earwax has distinct overtones of protein due to the accumulation of dead skin cells in the ear canal where wax collects. 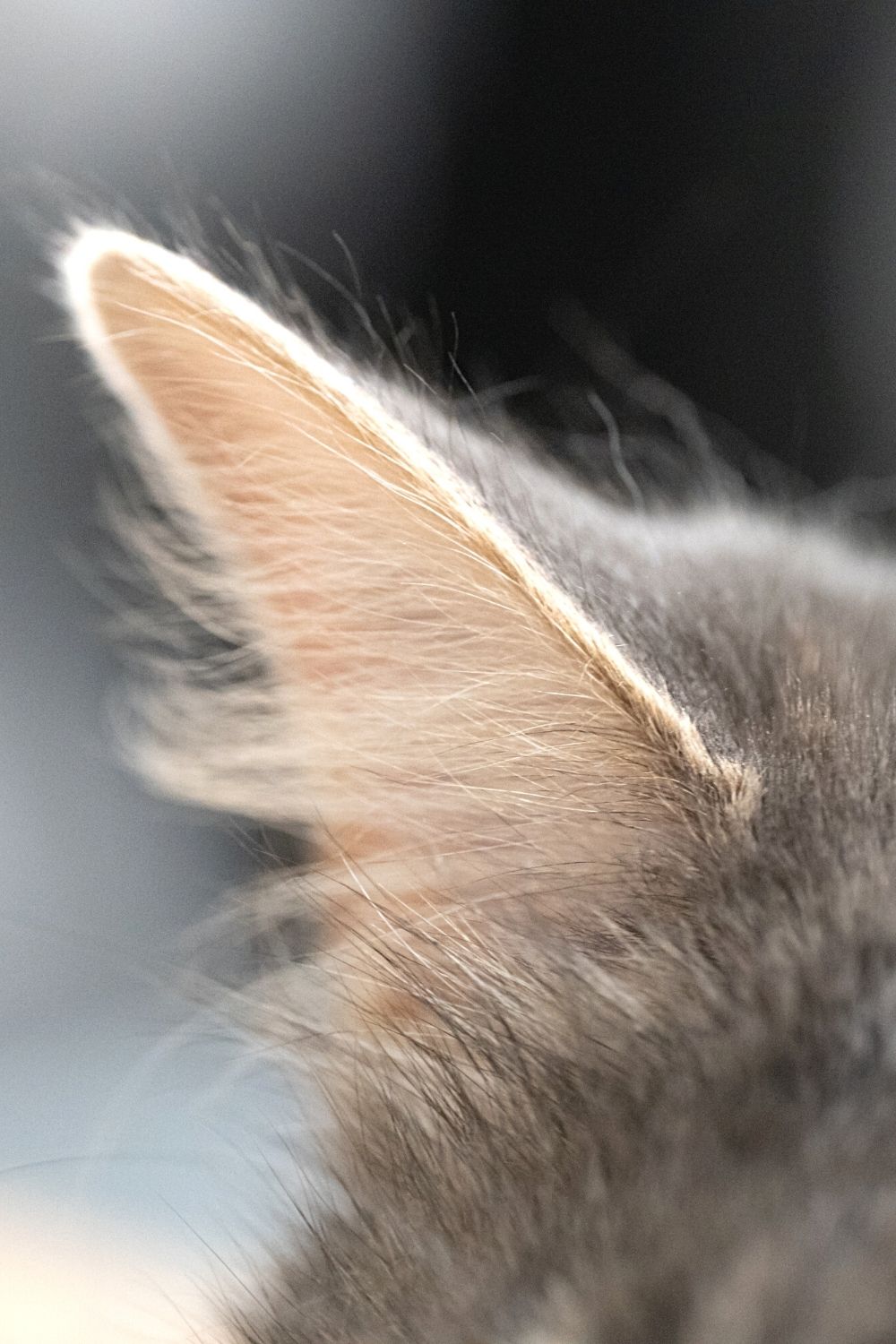 Simply put, the same bitter-smelling earwax of a cat or dog will smell positively heavenly to your cat.

Mostly, cats will groom other cats since they can’t really get to the earwax in their own ears, but some cats have been so socialized with dogs, so they may even groom on and snack in their K-9 buddy’s ears.

Since cats are programmed to go for blood, a bloody ear canal will instantly smell appealing to a cat.

A cat that has an ear infection or build-up of mites may suffer sores in the ear canal, which can lead to bleeding or leaking of tissue fluid into the earwax.

This cat, bloody, waxy mix collecting in your cat’s ear canal is like candy to other cats.

3. Cats Are Fond of Grooming

When cats hang out together, they tend to groom each other. 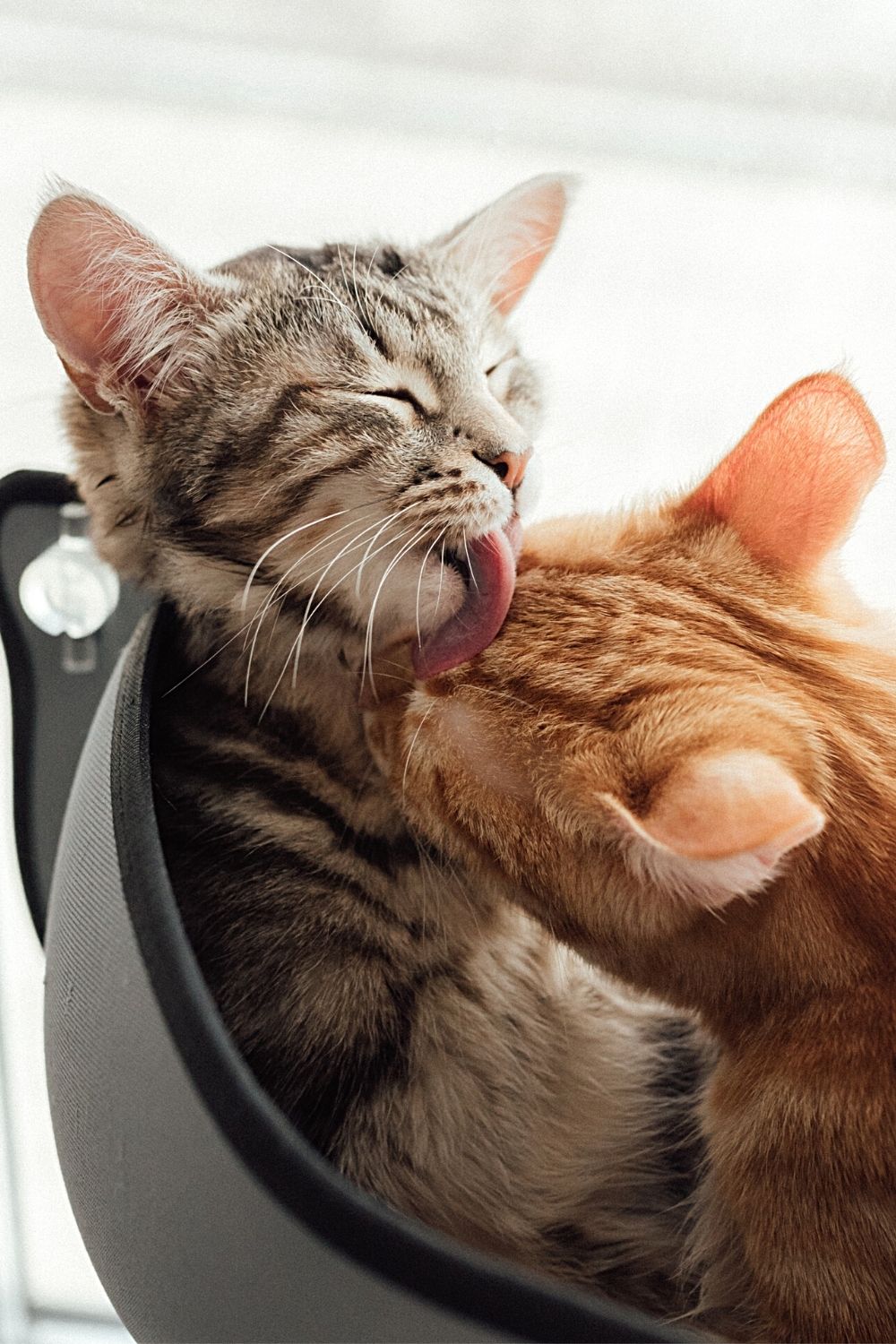 Cats love to groom each other, which includes licking each other’s ears

Since they can’t clean out their own ears, cats may lick and clean each other’s ears. It can become quite an obsession for them too.

4. Cats Show Affection by Grooming and Cleaning Their Ears

I tend to think of this one like the old Biblical custom of washing each other’s feet before a meal.

Cats do something similar, and it’s grooming and cleaning or licking each other’s ears. 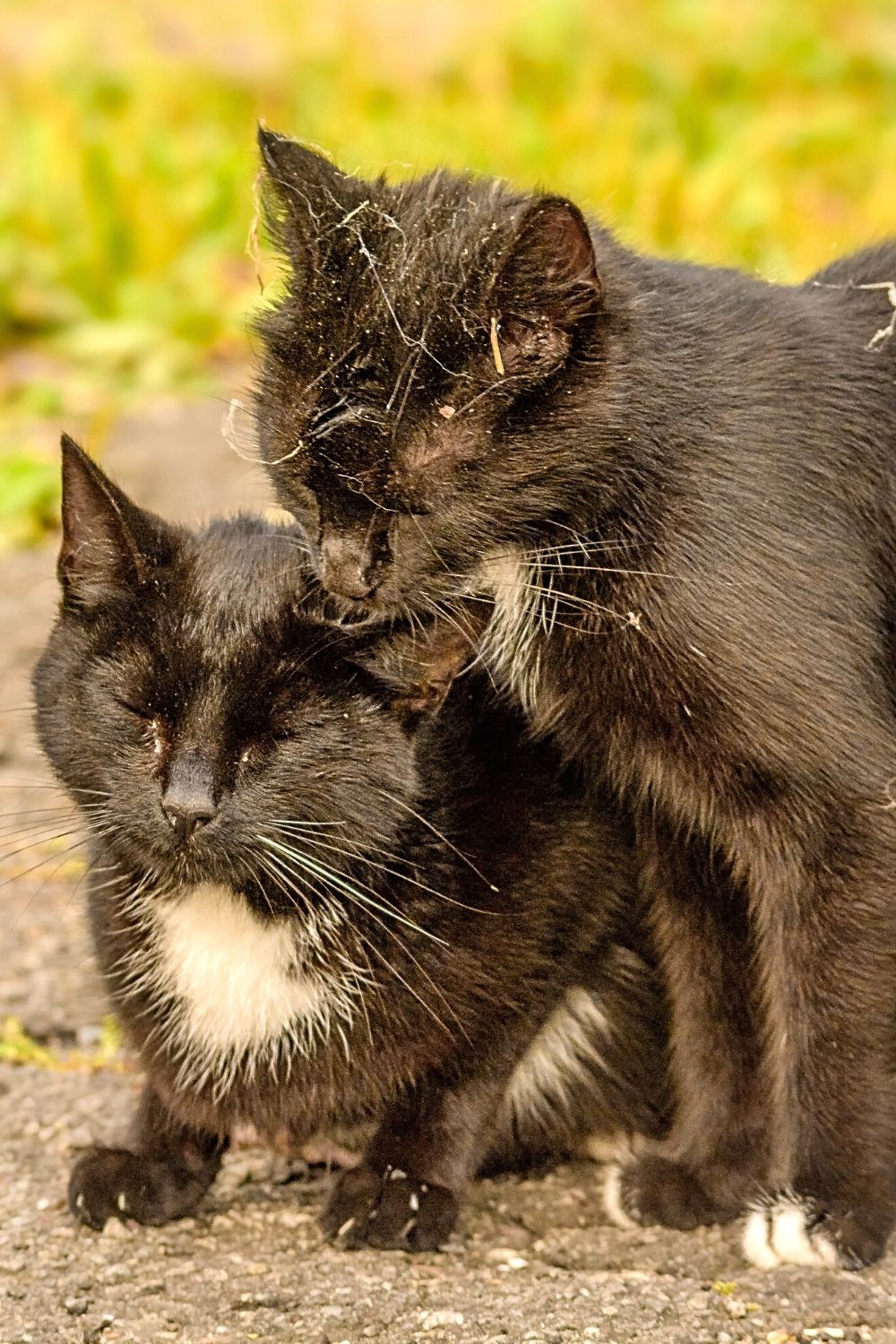 Female cats may instinctively lick their kittens, removing any smells that may be associated with food.

Young kittens can easily be eaten by the male cat, so females may lick their young all over (including the ear canal) to ensure they smell like her and not like blood or meat.

Now I knew the “why” of my cat’s rather disgusting licking habit, I was shocked.

However, since I am a concerned pet owner, I asked the vet if there were any dangers to a cat licking another cat’s ears.

Since the ear canal can be filled with a waxy buildup that may contain animal proteins and other biological material. Bacteria can collect there too.

When my cat decides that it is grooming time, she may accidentally ingest this unhealthy earwax mix, which can lead to diseases spreading.

My dogs also try to groom the cat as a way to thank her for her weekly ear grooming session, but she is never interested.

It’s not that she doesn’t like dogs — she adores them. However, they tend to lick her ears too vigorously, causing quite a bit of pain when they try to really get to the bottom of her ears. 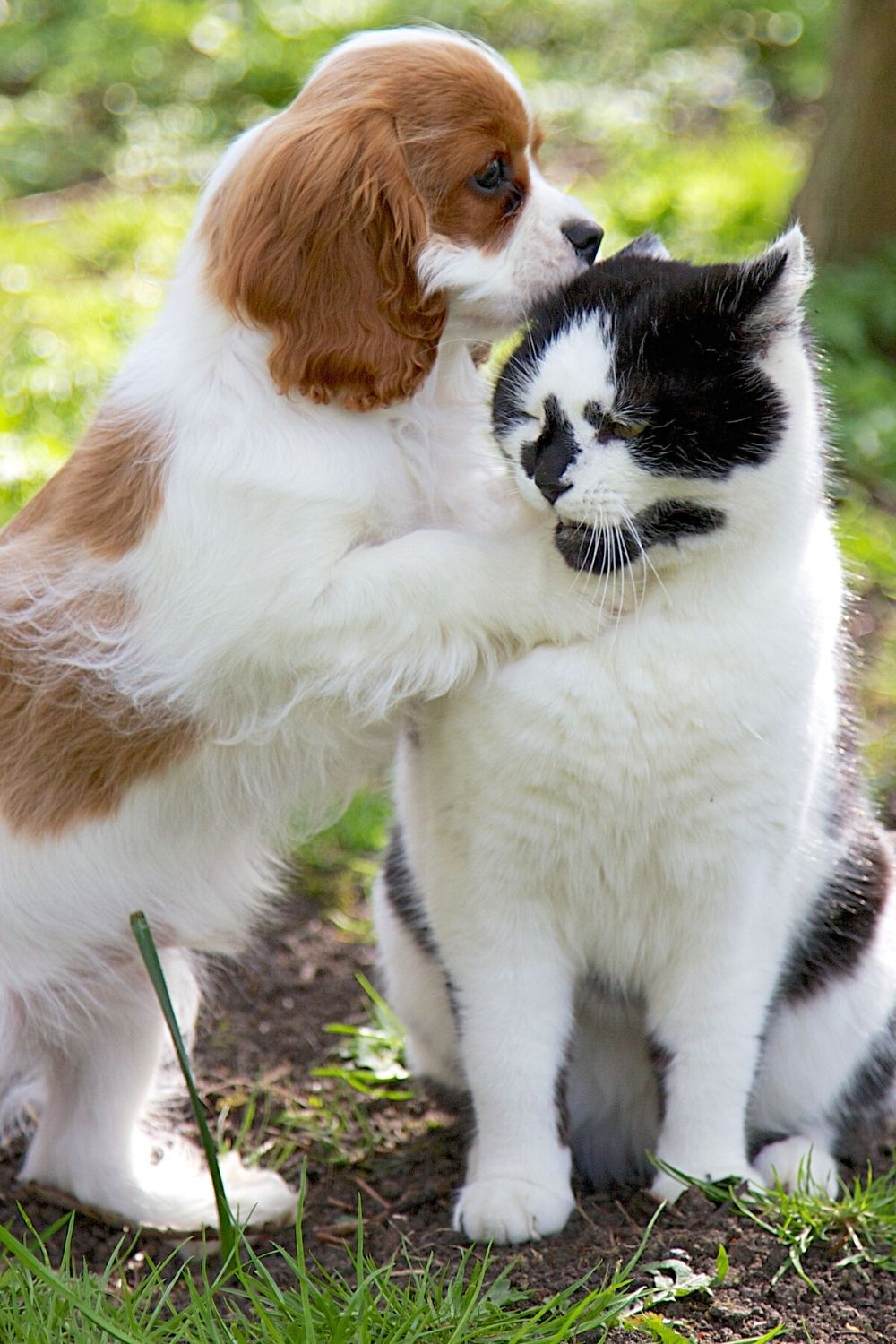 Dogs can sometimes forcefully (though unintentional) lick a cat’s ear, which can cause ear canal damage

When ear licking becomes too aggressive, your cat may suffer (or cause) ear canal damage to their grooming partner.

It’s a good idea to keep an eye on your cat’s grooming activities and monitor for aggression and signs of being unhappy.

As a result of damage to the ear canal, a cat may develop deafness.

The waxy ear matter may become further pressed down the ear canal when the cat is licked by another cat, leading to further damage and can eventually result in deafness.

Be sure to keep an eye that your cat isn’t being ear-saulted by their grooming buddy.

Regularly using a cleaning solution suitable for cats’ ears is a great way to reduce the “tastiness” of the earwax. This will make your cat’s ear wax less appetizing to other cats.

While I was surprised to learn that cats may spread disease by licking ear wax, I soon found an even more surprising consideration.

Cats that lick another cat’s ear that has a bacterial buildup or ear mites may be more likely to spread disease to your cat.

Your cat may also develop oral infections since they are ingesting bacteria and foreign particles that are caught in the waxy plug of your neighbor’s cat’s ears.

Cats may also end up fighting when one cat hurts the other by licking their ear too forcefully.

The fighting can result in serious damage such as scrapes, scratches, and bite marks.

I know my cat doesn’t like other cats licking her ears, and she fights tooth and nail to be rid of another cat’s affection.

Is it safe for cats to lick their fur parent’s ears?

Cats shouldn’t lick human ears as their mouths contain bacteria that are harmful to humans and can cause serious ear infections and spread disease.

When your cat’s earwax is black, it indicates they have mites. The black color is due to bloody residue from the mite bites that drip into the ear canal where it combines with the natural earwax.

Why do my cat’s ears stink?

When your cat’s ears stink, it usually means there is an ear infection, or the buildup of wax has reached the point where the ears no longer ventilate. Natural instinct would compel another cat to help groom your cat, restoring their health by eating the earwax out of their ear canal for them.

Cats are highly intelligent and very clean on themselves. So it was quite a surprise finding out that they don’t have the ability to keep their own ears clean.

Other cats help out in a process of mutual grooming to clean out each other’s ears.

Has your cat ever eaten earwax? What was your reaction?