The early morning wake-up call from your pet would not have been complete without the smack of a cold, wet nose.

It’s probably not the first thing you’re thinking about when you wake up, but why do cats have wet noses?

Cats can smell much better than us humans but not as good as dogs according to the Veterinary Medicine & Biomedical Sciences Department of the University of Texas.

While having a much better nose than us humans, cats don’t worry about having a wet nose.

The fact is, a cat’s nose dryness or wetness depends on several variables. Let’s look at those aspects and discover more about the signs you should note.

Why are Cats’ Noses Wet?

Cats’ noses are wet because all healthy cats have naturally wet noses. Wet noses help cats regulate their body temperature – much like sweating – and boost their sense of smell, because scent particles adhere to the moisture in the cat’s nasal passages, activating up to 200 million smell receptors. 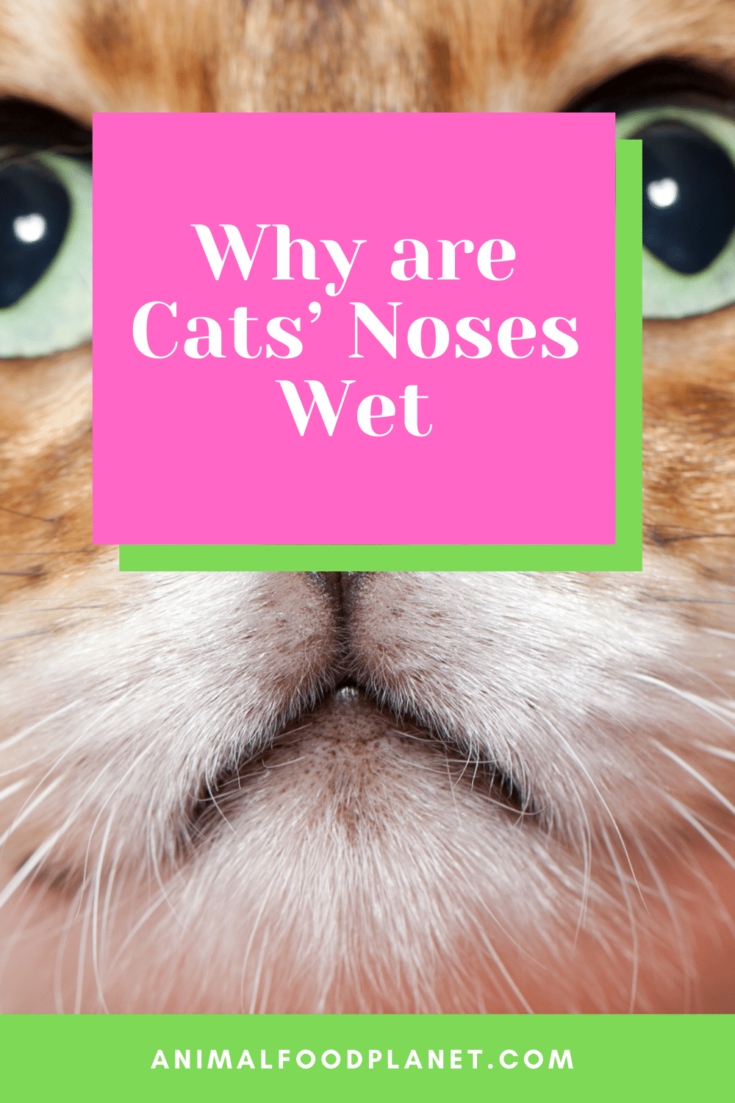 Why are Cats’ Noses Wet? 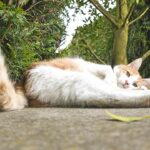 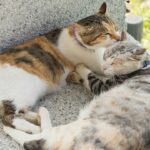 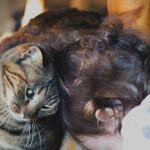 A moist nose can be highly beneficial to cats in numerous ways.

It may help promote the cooling effect of a hot body and draw attention to certain smells and scents.

Let’s explore the causes for your cat’s wet nose in greater specific detail. 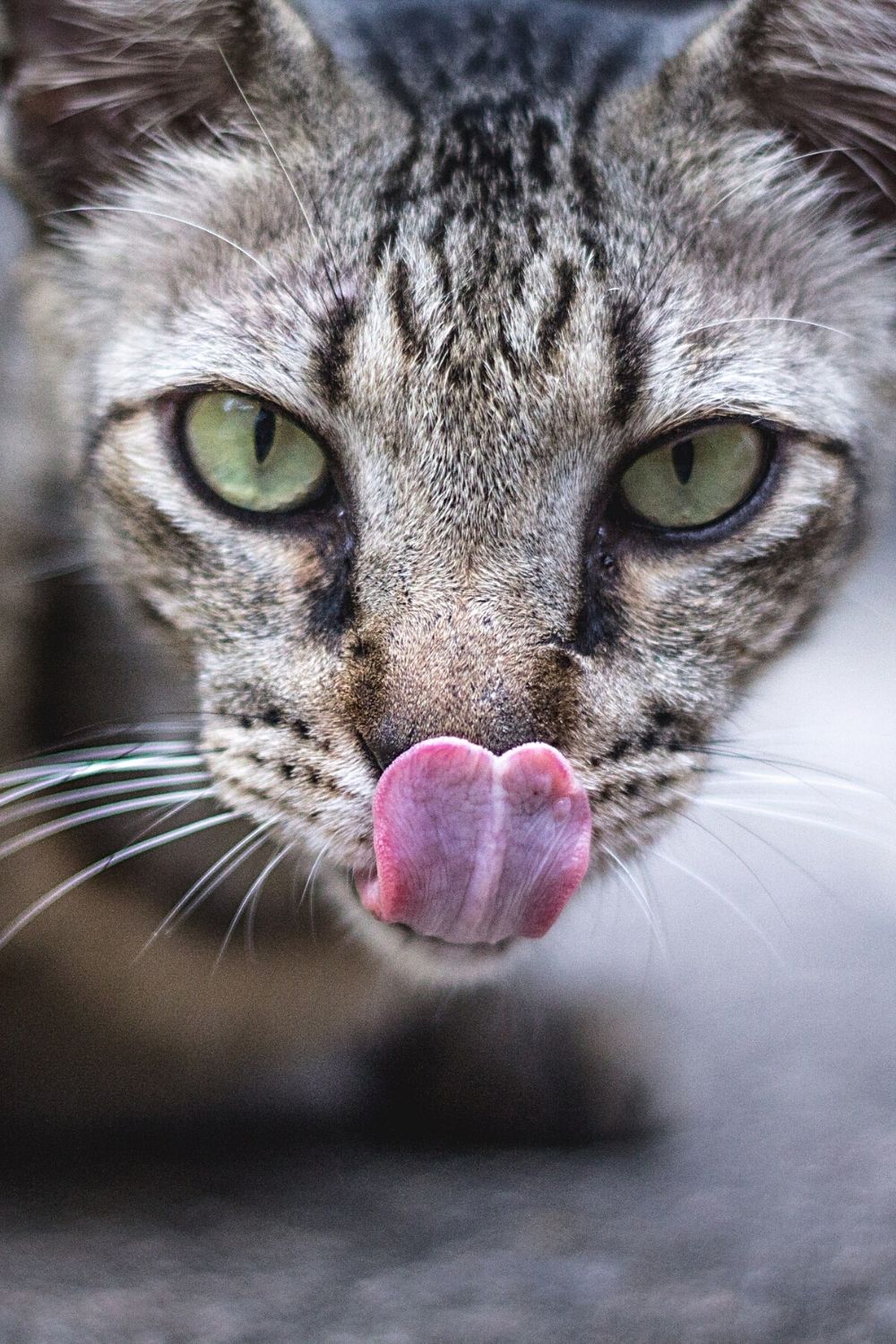 Because a cat’s nose is just a few inches from its tongue, any lick may spread moisture up into the nasal passage.

While grooming (as cats often do), their nose moves through the damp fur, collecting water as they lick their faces.

Because cats don’t sweat outside of their paw’s pads, keeping their noses wet is a great way to cool them down during hot conditions.

By licking their noses, they release the moisture in their noses, which will evaporate and help dissipate body temperatures. This helps prevent the cat from becoming too hot.

2. Cats are Pretty Sensitive to Their Environment 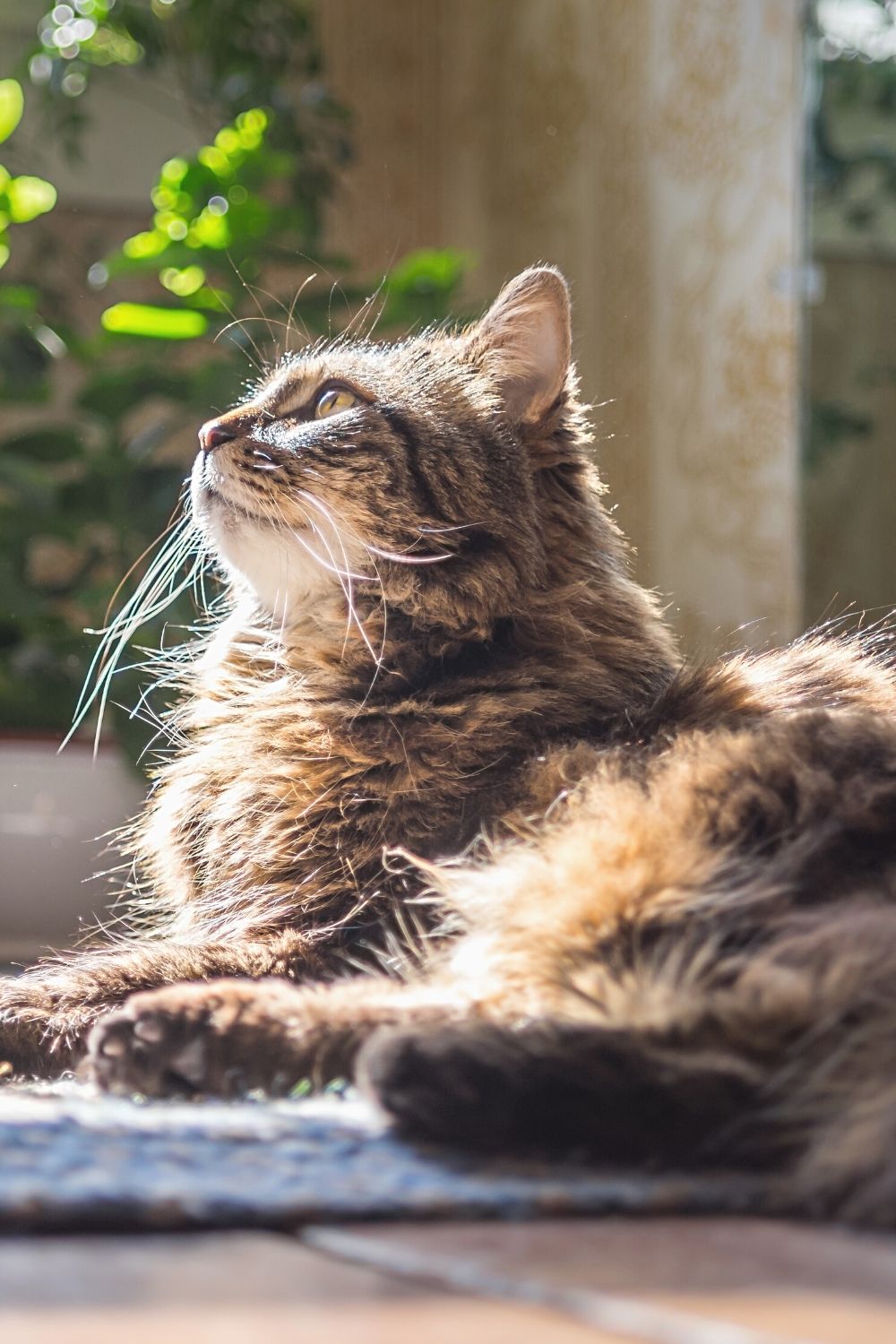 When cats sit in the sun, their noses sometimes get dry

The surrounding humidity and air temperature can significantly affect the wetness of your kitty’s nose.

The warmer, humid climate leads to the condensation of water particles that your cat exhales, which makes the surface of the nose dry.

However, dry, cold air can drain the moisture out of its nose, which can cause a dry and cracked nasal planum.

Sitting in the sun or next to an electric heater can also draw away moisture from the nose, leading to a dry, dry nose.

3. When Cats Drink, They Sometimes Miss Their Mouth 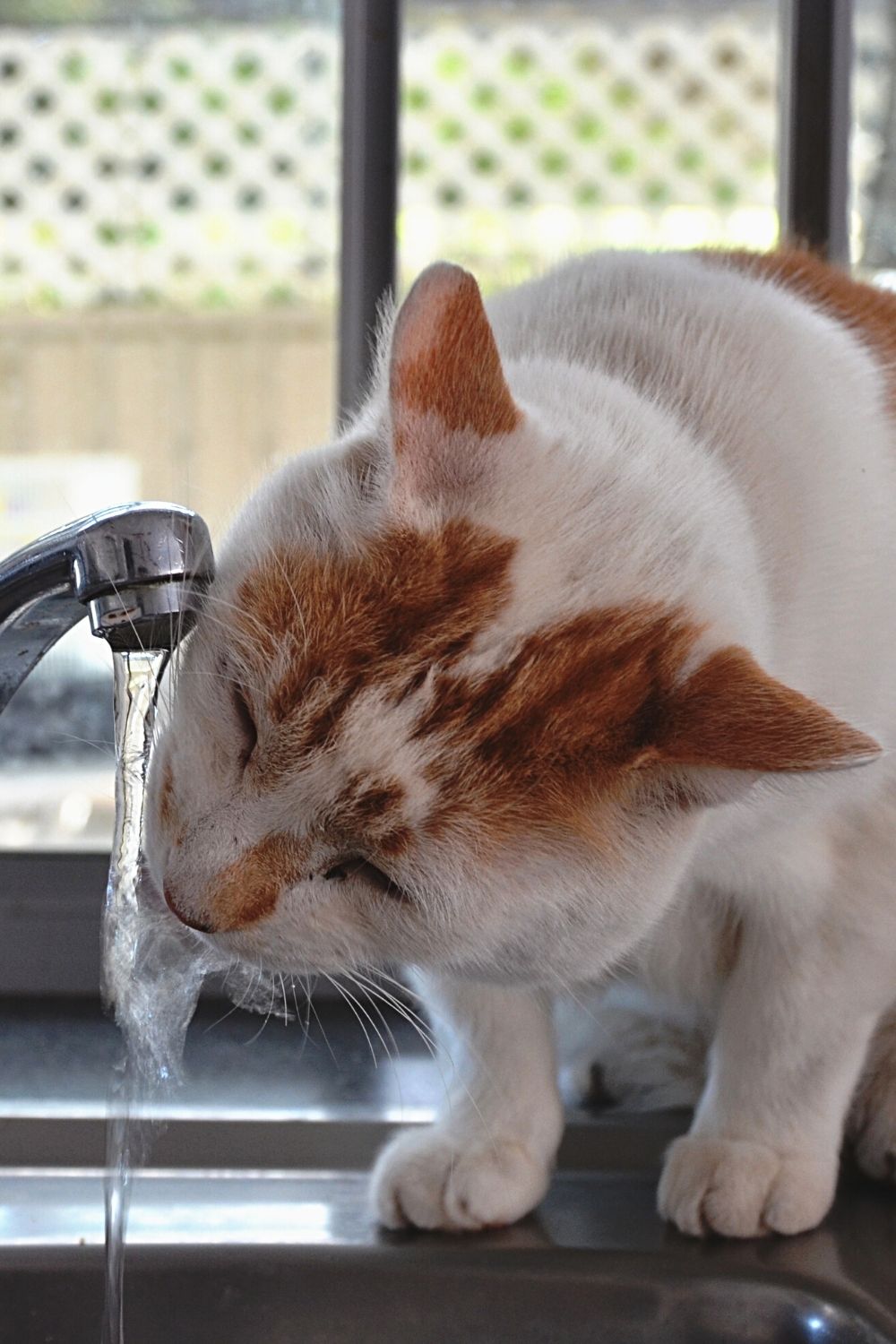 When Cats Drink, They Sometimes Miss Their Mouth

Yes, I know. But really. I promise. Most cats are shrewd drinkers and are trained to keep their faces fresh and dry throughout the drinking process.

But, if the level of water in their bowl isn’t high enough, your cat may dip its nose in the water a bit too deeply in the course of drinking.

The wet nose lasts only a few minutes; however, it can cause excessive licking, keeping it moist for longer.

4. Cats are Sensitive to Respiratory Diseases

Kitties are prone to many kinds of upper respiratory infections.

They are typically manifested by a runny eye and nose and some coughing. All of these symptoms could cause a cat’s nose to become wet. 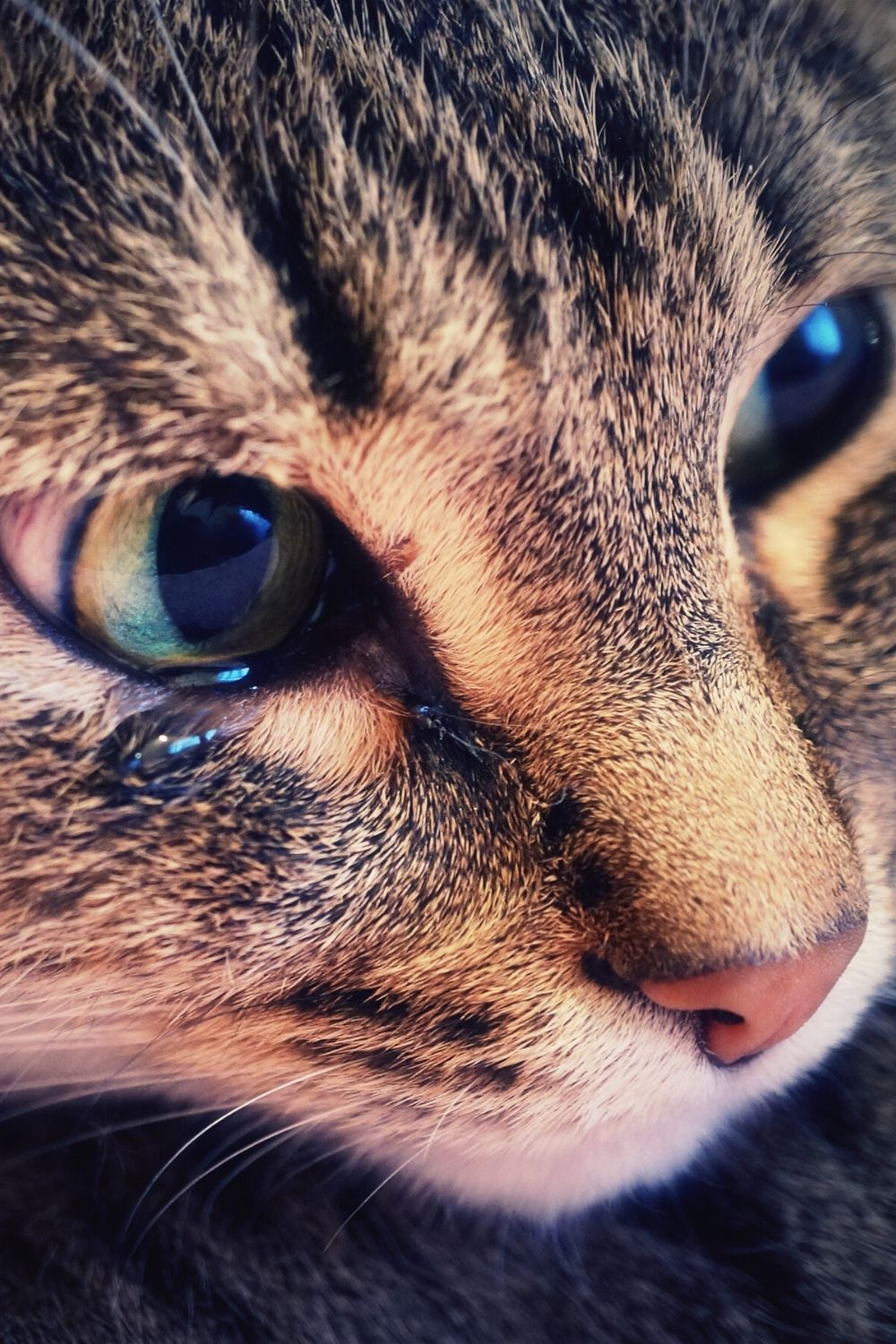 Cats cry, and when they do, the overflow fluid goes to the nose

When the eyes of a cat tear, the overflow fluid is removed from its eyelids and then goes to the nose through the nasal nasolacrimal duct.

If your cat is constantly producing tears, it might be an allergic reaction that affects its eyes or some other illness.

The cat’s tears go down the nasolacrimal duct and cause the nose to become wet.

When a Cat’s Nose is Dry

In general, a dry nose for your feline pet is nothing, but the weather is turning cold, or they are shivering in front of an overhead fan.

Dry noses are not always problematic.

An indication of a problem is when the cat’s dry nose occurs in conjunction with other signs or behaviors that are troubling, like a decrease in appetite, fever, or fatigue.

You can determine the temperature of your cat’s body by rubbing its nose or ear. A nose that’s dry or too hot or cold could suggest an illness or heat stroke.

Make sure you visit your vet when your cat exhibits an unresponsive nose and other unusual symptoms or behavior.

If you observe that your cat’s nose has suddenly become dry, pay more attention to its normal behavior to see if you can spot anything that appears to be a bit odd.

When a Cat’s Nose is Unusually Wet

The amount of water entering your cat’s nose varies throughout the day. Don’t be overly concerned unless you notice other obvious signs.

A nose that is swollen or drips may be an indication of an allergy or upper respiratory infection. Pay attention to the color of any fluids emanating from the cat’s nose.

The presence of thick, dark-colored drainage typically indicates a bacterial infection, while clear drainage may indicate allergies or a viral infection.

Most of the time, these ailments are also associated with runny eyes, coughing, and sneezing. A fever, reduced appetite, and fatigue are often also a sign.

If your cat’s wet nose is coupled with any other changes or shifts, it’s an ideal time to visit your vet.

There’s more to the nose of a cat than the fact that it’s dry or wet. It’s the entry point to your cat’s primary sense of smell.

You may have seen dogs follow a person or another animal simply by their sense of smell alone, yet the reality is that this sense is better developed in cats than in canines.

With more than 200 million scent receptors in the nasal cavity of cats, they can detect their prey, find their way home, and recognize other animals and humans by smell alone.

They also know where you’ve been all day by a single whiff (supposedly).

To a cat, smell is also a crucial element of eating. With less sense of taste than other animals, the scent of food means far more to cats than the way it tastes.

The reason cats suffering from upper respiratory congestion might be unable to eat until their sense of smell returns is that food will seem unappetizing to them.

Air gets into a cat’s nostrils through the frontal, round parts of its nose. As the cat exhales, the air is let out through slits on the lower side of the nose.

This helps cats figure out where smells come from.

I wonder who the heck figured that out — and how?!

Frequently Asked Questions about Why Cats’ Noses are Wet

Is it true that cats’ noses have identical prints?

It’s not true at all that cats’ noses have identical prints. In fact, what’s so nonsensical about that claim is that the exact opposite is true: cats have unique nose prints, much like humans have unique fingerprints.


Afterword: Why are Cats’ Noses Wet?

In typical amounts, a wet nose aids your kitty’s sense of smell. It also assists in regulating body temperature on hot days.

There’s little need to be concerned if your feline has a dry nose from time to time – it’s perfectly normal.

Wet or dry, there’s no need to worry unless your pet is listless, not eating well, and out of sorts.