What Time Do Bats Leave and Return to the Roost? Ooh, I Know! 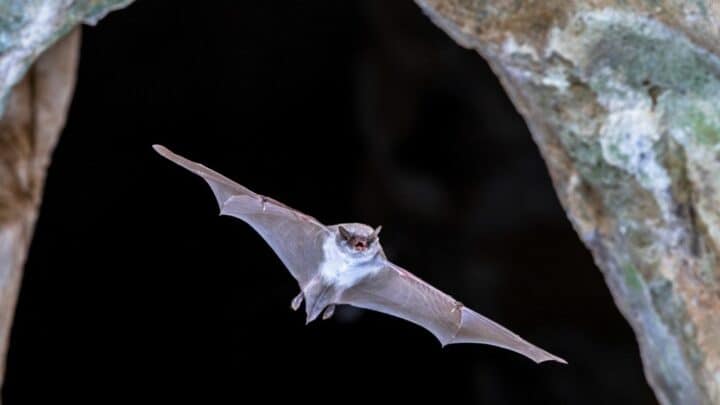 Most likely, there are bats living and lurking within your neighborhood, but you will rarely see them except for when they are leaving or returning to their roost.

Yes, the correct word is indeed roost, not nest. Bats live and travel together in colonies for safety and warmth, and the places that these bat colonies temporarily call home are referred to as their roosts.

While many bats do live in the stereotypical cave, this roost may very well be an old church or barn, or even your own attic or basement.

If you want the opportunity to spot a bat, the key to doing so is knowing when they leave their roost and return to it. Fortunately, bats have a fairly standard schedule, so it is not that difficult to figure out the answer to this question.

When Do Bats Leave and Return to Their Roosts?

Bats Leave Their Roosts at Sunset or Nightfall

While bats do indeed prefer the darkness as it is a source of protection from predatory birds that prey upon bats, such as owls, bats don’t always wait until midnight strikes to head out of their roosts in search of food.

You may very well spot a colony of bats flying from their roosts just as the sun begins to set. Bats spend the daylight hours hanging upside-down and sleeping in their roosts prior to going on the hunt at sunset.

Fortunately, you don’t need to be afraid of a bat preying upon you during their nightly hunt for food. Most species of bats feed on insects, including mosquitoes, so if you happen to see a colony of bats fleeing their roosts, it is safe to enjoy the sight and even snap a picture.

You don’t need to run and hide.

Although bats lurk deep within the shadows to avoid predators, their primary goal when they leave their roosts is to find food and water, so if they happen to notice a swarm of insects around a streetlamp, they may very well head to the light to feed for a few minutes.

Since bats rely upon their hearing ability and their unique sound to locate prey, they are able to successfully hunt after dark without needing to see their prey.

However, the placement of streetlights has been known to reduce the number of bat sightings in a neighborhood. It doesn’t necessarily convey that the local bats have fled.

They simply prefer to remain in the darkness.

Bats Return to Their Roosts at Dawn

Aside from returning for a brief nap in between hunting, bats call it a night and return home to their roosts at dawn. Just before the sun rises is the ideal time to spot a bat colony flying back to their roosts.

They will remain there throughout the duration of the day until the sun sets again that evening.

Bats won’t stay out during daylight hours as the chances of them being attacked by predators is higher when it is light outside, so they accomplish all of their hunting throughout the nighttime.

While they are hunting, they will return to their roosts to rest after having enjoyed a good meal. Bats will head out of their roosts and hunt for a couple of hours prior to taking a break.

After resting, they will go back out for another round of hunting before finally calling it quits and returning to their roost. Now, this isn’t necessarily due to them still being hungry after the initial meal.

Bats hibernate during the winter to avoid the freezing temperatures, which means that they need to have enough food during the warmer months for both their nightly meals and to suffice them throughout the winter months.

Hibernation is the exception to the rule of when bats go out and come back to their roosts.

While some bat species will migrate to warmer climates when winter starts approaching, most bats will locate a winter roost that is the ideal temperature for hibernation. These bats will likely get settled into this roost around early fall and not leave the roost again until April.

Do Bats Have Temporary Roosts?

Bats sometimes don’t feel like traveling all the way back to their main roost to rest after their initial nightly meal, so they improvise with temporary roosts that merely serve as a place to take a quick nap. They may even use your carport or a gazebo in your backyard as a temporary resting place.

A bat colony may use several different roosting places, depending upon the climate, temperature, and nearby sources of food and water. Bats may very well roost in a basement for part of the year, and roost in an old hollowed-out tree for the remainder of the year.

In general, bats leave their roosts at sunset or nightfall to search for food, returning to their roost right before daybreak. However, every fall they select a winter roost to remain in through the cooler months.

They will usually settle into that roost around September and not leave until April.

So, if you want to catch a glimpse of your neighborhood bats, the best time to do so is around sunset and dawn throughout the warmer months, while they are coming to and going from their roosts.

Once winter approaches, they won’t bother to leave their roosts for quite 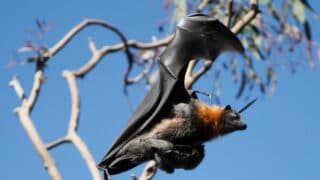 Next
When Do Bats Have Babies? Ooh, Exciting!

What Eats Bats? Scary! [for approval]

[…] it comes to the question of what eats bats, the answer has more to do with what can catch bats, as opposed to what will actually decide to eat […]

When Do Bats Have Babies? Ooh, Exciting!

[…] strange and unique as bats may appear, their maternity cycles are similar to those of other mammals. Once per year, a female […]