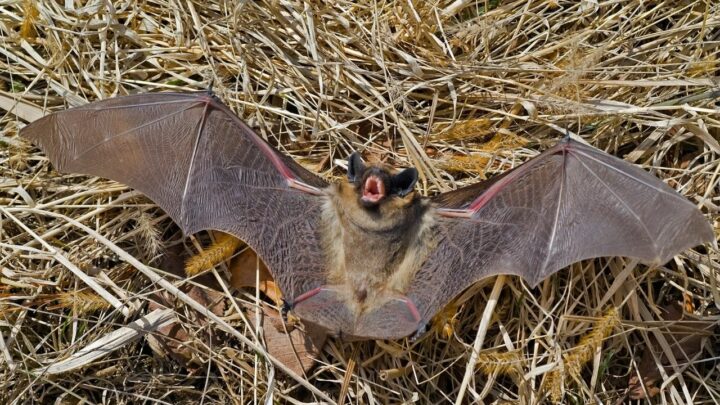 If you’ve ever believed bats are mute, or that they only communicate in silence, then you’re in for a surprise.

I certainly discovered that bats can be quite vocal when I found a baby bat one evening and became its surrogate for several weeks.

Bats are capable of a range of sounds, and it’s actually we who don’t hear them all the time.

Bats are known to use echolocation where they send out ultrasonic frequencies that are higher in frequency than our spectrum of hearing. So bats do make sounds. They also produce more audible sounds that are low enough that we can hear them. These are usually squeaks, chirps, screeching sounds, chirps, and whistles.

How to Hear Bats

Depending on the species of bat, they may use all these or just one type of sound production, but they all produce ultrasonic sounds with one reason in mind: echolocation. This is how bats see better.

While you may believe that bats are, well, as blind as a bat, this is not necessarily true. Some bats can see, though their eyesight is weak.

The bat pup, or baby bat, I raised was quite capable of seeing my hand when I brought him his meals, and he could make sense of his world without relying on echolocation.

However, most bats rely on echolocation, and they can zone in on a particular object that their sound waves bounce off from. This is why a bat won’t easily fly into something.

Effectively, bats hear where they are going.

What we hear in our homes where bats have taken up nesting is not the typical ultrasonic sounds that bats rely on to fly and hunt.

Instead, the sounds from a bat colony, which I would describe as chittering, chirping, screeching, and scratching, is the sound made by the bats moving different body parts.

They scrape along the ceiling boards, they screech at another bat that comes too close to a mother’s pup, and they may fight over perching space. A bat colony is a noisy place.

Bats can be recorded, even though you can’t hear them. To make a bat recording, I use a bat detector equipped with ultrasonic microphone.

The recording may sound like nothing, but once I run it through a filtering program on my computer that slows the sound down by a factor of 10, the sounds emerge.

Bats are engaged in a constant chirping, much like birds, while they are flying.

They choose to “see” where they are going with ultrasonic sounds because the shorter sound waves quickly bounce back to them, allowing them to fly circles around that juicy moth they are trying to catch.

Additionally, ultrasonic sounds require less energy to make than chirping aloud, and since they constantly make the sounds, they would require a lot of energy to produce normal sounds as often.

While most people believe bats simply hear the feedback from their ultrasonic sound waves, the reality is far more complicated.

When I was fostering the bat pup I had found, I quickly realized that baby bats can learn to recognize the sound and pitch of your voice. The bat pup would become excited when I called as he realized it meant food.

By screeching at me, he could determine where the juicy morsels I was feeding him were positioned.

Like someone saying your name will trigger your attention in a noisy place, despite the surrounding noise of a bat colony, a bat can hear their own sound echoes. They decide what they listen to.

This allows them to hear what is right ahead of them (like it has their name), where their next meal is flying, and if there is an obstacle ahead of them.

How to Quiet a Noisy Bat Colony

I personally love the sound of the small bat colony in my roof space. Their soft scratching and chittering are hardly upsetting, but I know that many people don’t like hearing the sounds of bats in their homes.

It’s tempting to get rid of the colony and call in a pest control service. Yet, bats have a huge role to play in the ecology, and they are necessary to control insects and other pests like mosquitoes.

Before you remove your local bats, take steps to dampen noises. You can install soundproof insulation, move furniture to cover sound spots and change around bedroom arrangements to keep your sleep space away from the nesting area of the bat colony.

With some planning, you don’t need to hear bats in your home at all.

Can you hear the squeak bats make?

Some bat sounds are produced at an audio level that is at the lower end of the ultrasonic spectrum and maybe audible to humans. Mostly, bats produce noises that are not within the normal spectrum of sound for humans. So while you may hear some bat squeaks, you will not hear all of these sounds unless you use an ultrasonic microphone and slow down the speed to reduce the frequency to within human hearing.

What noises do bats hate?

Knowing that bats communicate in ultrasonic noises, you can use this to your advantage to encourage a nest of bats to leave your roof where they may be roosting. By playing ultrasonic sounds to them, you will be telling them in their own sounds to move on. Since bats don’t like other ultrasonic sounds, which can confuse them, they will soon vacate the premises.

How do bats not go deaf when they are surrounded by noise?

Bats are constantly surrounded by ultrasonic noises. One bat can produce as much as 100-110 decibels of noise pressure with a single squeal. Hence, it would stand to reason that bats should go deaf over time when they are surrounded by hundreds of other equally noisy bats. However, bats suffer no hearing loss whatsoever. While bats are constantly seeing through their hearing, they never suffer noise sensitivity.

Bats are unique mammals, and their sounds form part of their socialization process, and it is also how they hunt and how they see their world.

While we can only hear a fraction of their sounds, bats can click, scrape, flap, and squeak their way into our hearts. Some bats even sound like songbirds if you listen to them with specialist sound recording equipment.

Bats are talking; are you listening? 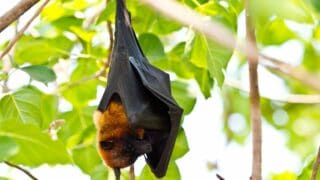 Previous
How Many Mosquitoes Do Bats Eat? Here's The Answer! 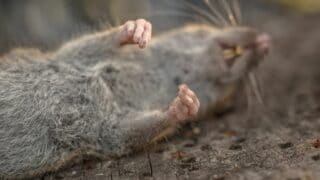 Next
How To Tell If My Rat Is Dying? 6 Telltale Signs

[…] bats are possibly one of the cutest animals on the planet. They’re so tiny, and they don’t […]