Skip to Content
If you’re lucky enough to live in an area where bats live, you’ve probably seen them flying around at dusk. A lot of people are afraid of bats, worried they’ll get stuck in their hair or suck their blood. The answer to one important question may help alleviate some of that fear: What do bats eat? I’m here to answer that, and more!

What do bats eat?

Bats mostly eat insects. Most types of bats prefer flying insects such as mosquitos, but some bat species eat nectar, fruit, and pollen. Of thousands of species, only three drink blood, but they avoid human blood whenever possible. 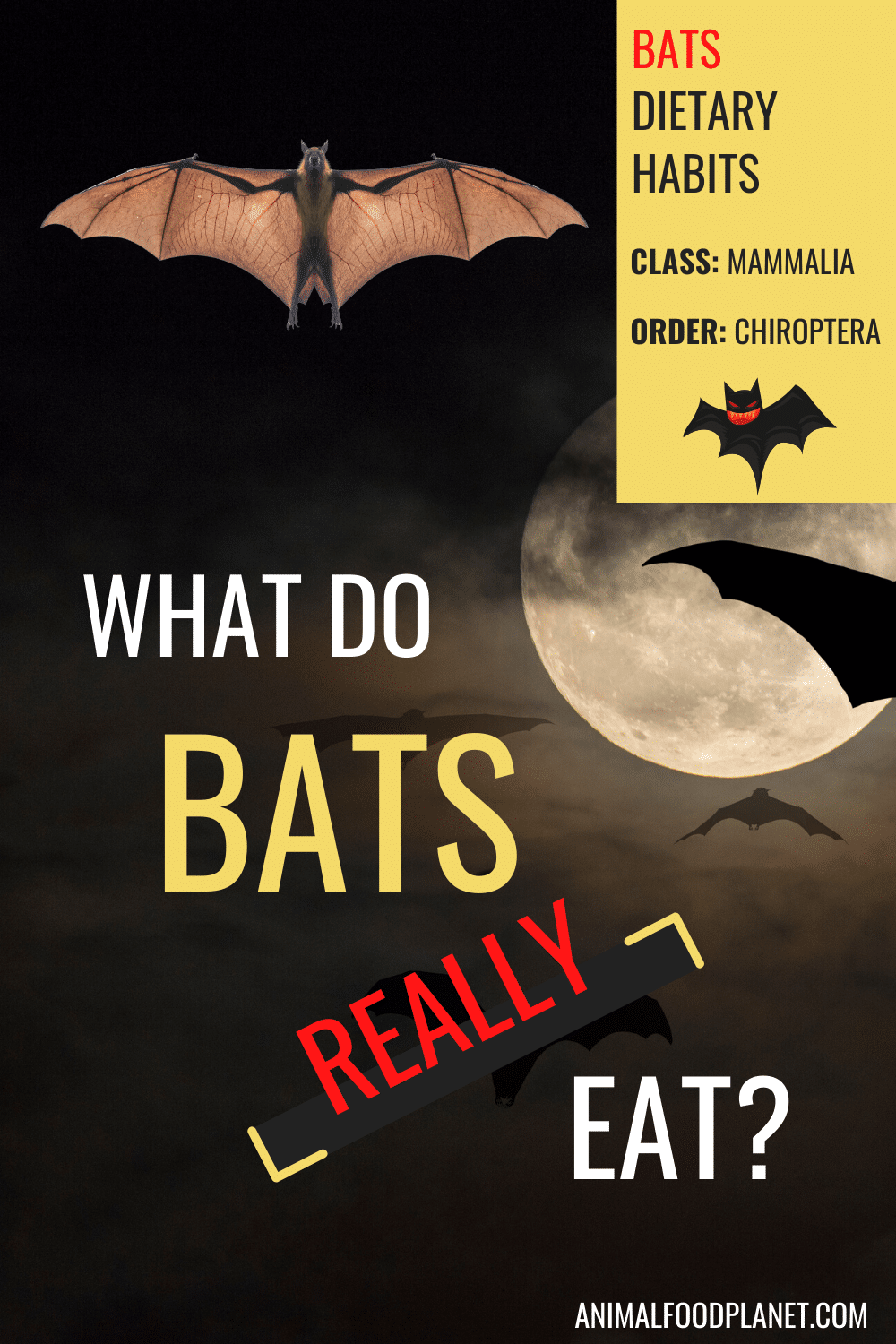 What Do Bats Eat?

Bats are an essential part of the ecosystem, and they play a vital role in keeping everything in balance. They eat insects that spread diseases to humans and livestock, and they are even responsible for a significant portion of pollination!

There is so much more to what bats eat and why, I have a whole article below bursting with facts to satisfy your hunger for knowledge. Let’s dig in!

As with most animals, this answer depends on the species. There are more than 1,200 species of bats around the globe. To put that number into perspective, bats make up about 20% of all the classified mammals in the world.

With that many species—and how many individual bats that must be—it’s safe to say they can’t possibly all eat the same things. However, the majority of bats eat similar foods: insects.

We’ll get to the other foods bats eat in a moment, but let’s take a look at their biggest meal. 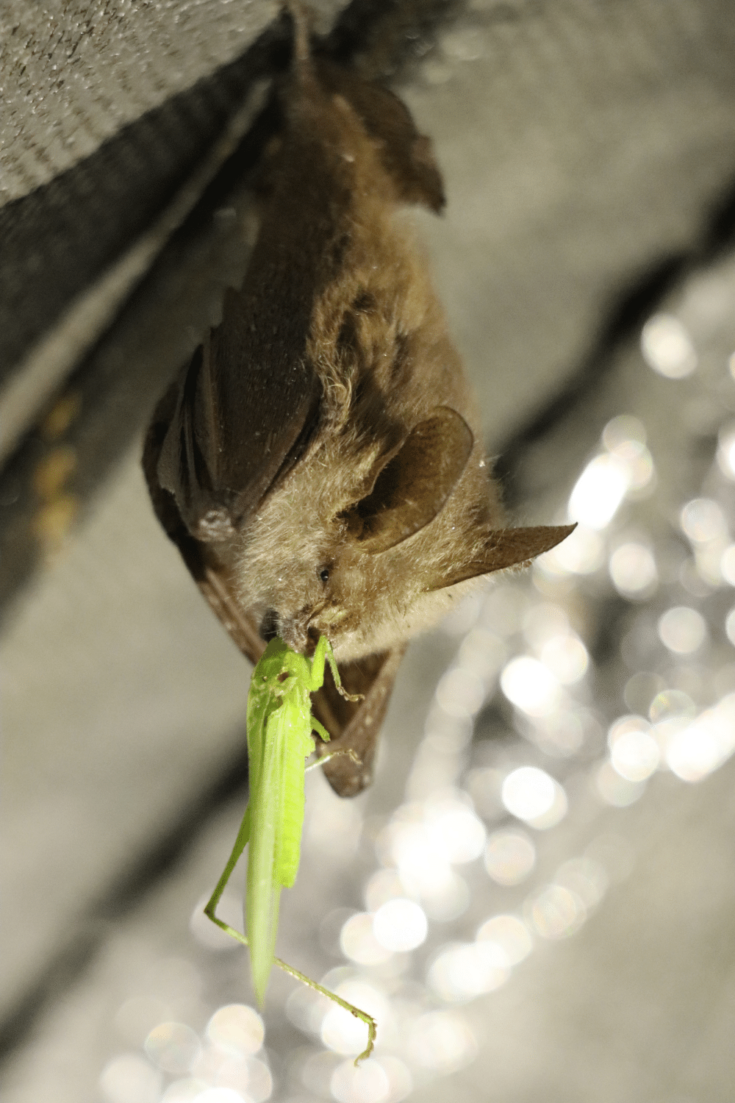 How many insects do bats eat?

Bats come in all shapes and sizes. A smaller bat, such as the aptly named little brown bat, will obviously eat much less than the flying fox bat. But even the tiniest bats eat a significant number of insects each night.

One little brown bat (yes, it’s really called that!) can eat enough insects to weigh about the same as one or two grapes. I realize that doesn’t sound like a lot to a big human being, but considering that a little brown bat is only .29 oz, which is 8.22 grams, while a single grape is about 5 grams, it is still pretty incredible!

To put it simply, a little brown bat eats nearly its own body weight in insects every single night! One hundred little brown bats eating insects can eat approximately one pound in a night.

It is estimated that bats (in general, not accounting for breed specifics) can eat about 8,000 insects every night. Most of those are mosquitos, which mean you’ll have less chance of being bitten by an itchy bug and contracting some terrible diseases.

To give you an even bigger number to swallow, scientists estimate that bats eat about four tons of insects each year.

How do bats eat insects?

Whether an insect flies or crawls on the ground, bats can still find them. They use echolocation to locate insects in the dark.

When a bat finds a suitable flying bug, they swoop in and snatch it right out of the air. But they don’t usually use their teeth. They use their tails to catch the insect, then land to go eat it in peace.

If the insect is on the ground, bats dive to surprise them. These bats don’t use their tails to scoop the insects up. They chomp down with a mouthful of tiny, razor-sharp teeth. The bat will stay on the ground long enough to consume its meal, then it takes flight once more to look for the next course.

What else do bats eat other than insects?

Though about 70% of bats eat insects, there are a few varieties that eat other foods. The flying fox, for example, is about five feet long and weighs around three pounds. It would take far too many tiny insects to fill his belly, so he eats nectar and pollen instead.

The flying fox will also eat fruit. It prefers nectar and pollen, but it will eat fruit if its normal food sources are scarce. Some people set out fresh, cut fruit for flying foxes and other fruit bats. Some favorites include mangos and apples.

A small percentage of bats can be called true carnivores. That means they eat meat. For their meals, they prefer frogs, fish, lizards, and small birds. They have even been known to eat other bats.

How do bats eat fruit?

Even though they have sharp teeth, bats don’t usually chew and swallow pieces of fruit. They prefer to pierce the skin of their fruit, suck out the juices, and then spit out any seeds or pulp.

Maybe that seems wasteful to you. But did you know that fruit bats are one of the ways fruit trees spread their seeds? If it weren’t for bats, some species of trees would have a very hard time getting their seeds planted far enough away to spread. 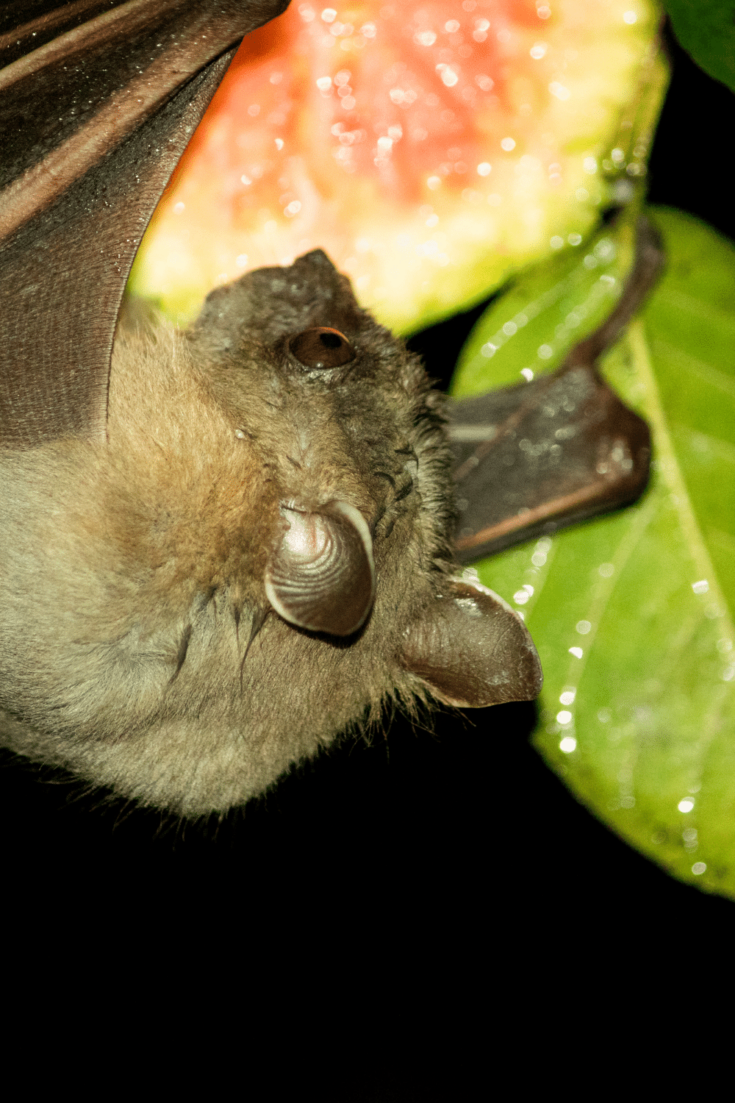 How do bats eat nectar?

I was surprised to learn that many bat species prefer to eat nectar. I assumed butterflies, hummingbirds, and bees were the only ones doing that. Maybe it’s because bats are most active at night, but I never thought they’d go after flowers!

It’s true though. These little bats have extra long tongues that can reach deep into flowers to find the delicious nectar. Sadly, nectar-eating bats are at high risk for extinction. It’s much harder for these bats to find enough food compared to insect-eating bats. 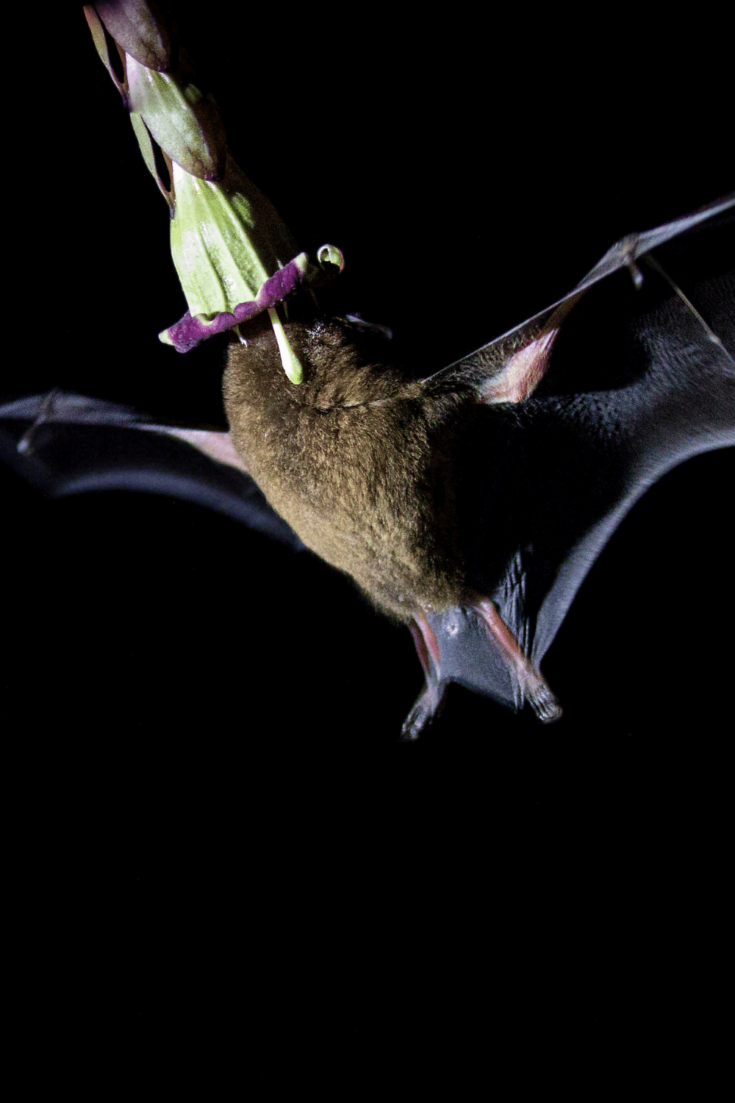 I know it seems strange to think of creepy bats eating pollen, but they do. In fact, bats that eat pollen are responsible for a large amount of the pollination going on in desert and tropical climates. They are especially active in the Pacific Islands, Southeast Asia, and Africa.

Like bees and butterflies, pollen-eating bats will go from flower to flower looking for a snack. They collect and deposit pollen just like bees!

This incredible video shows a rare tube-lipped bat drinking nectar. You can see how long his tongue is and how he must reach way inside the flower to get his meal. While he’s there, you can see the flower depositing pollen onto the bat’s head, which he then brings to the next flower. 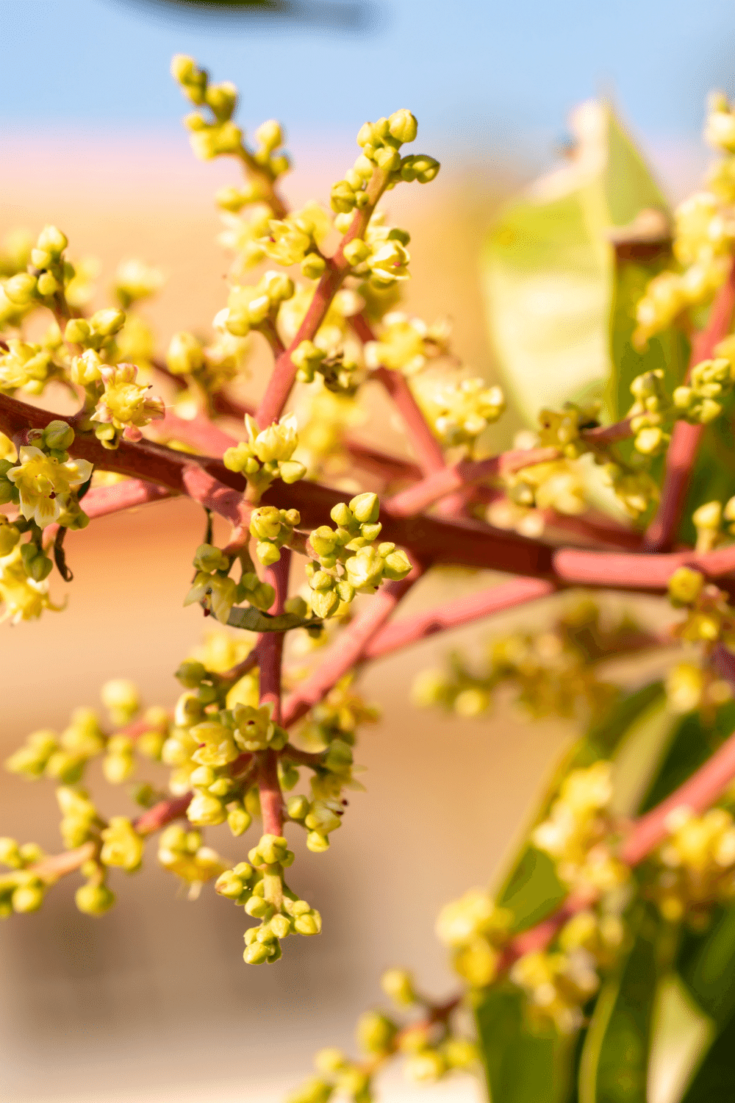 How do bats eat meat?

Bats have the same hunting techniques for vertebrates as they do for insects. They use their echolocation to locate and track their prey, then swoop in to eat them.

The fringe-lipped bat loves frogs. They listen for the frog mating calls, then snatch them from the water.

The spectral bat and the ghost bat are two species that excel at hunting other bats. 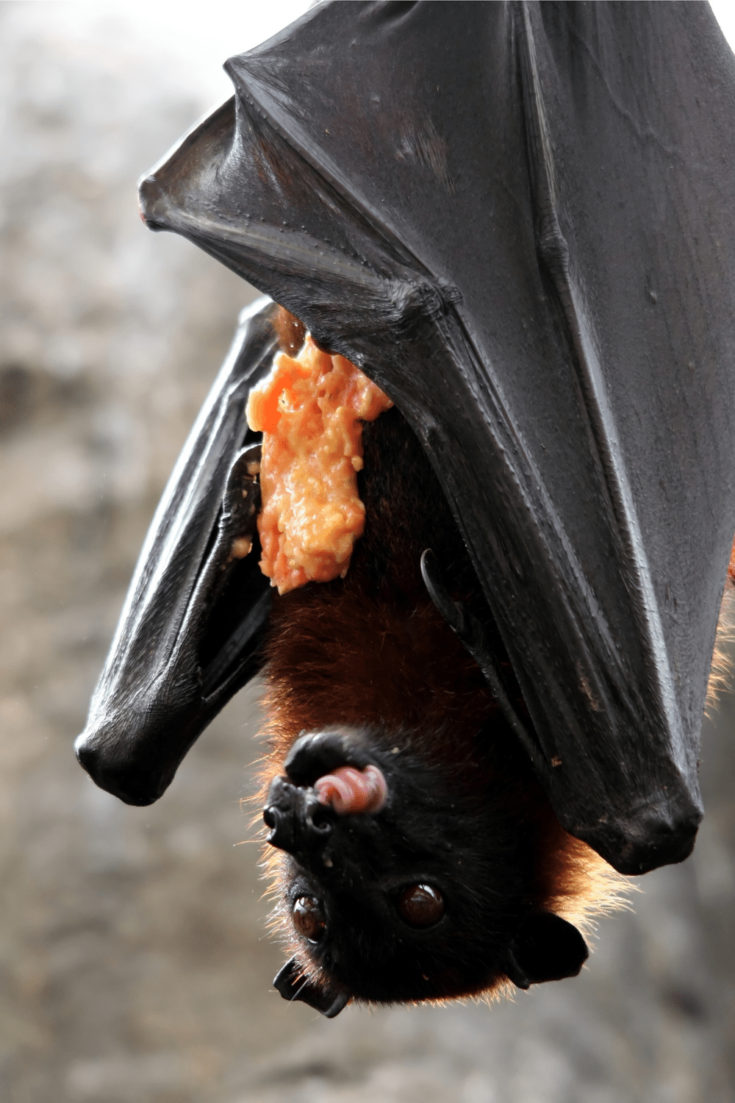 Vampire bats do exist, but they aren’t as common as the other types of bats. Yes, vampire bats drink blood… but they’re not interested in yours.

The common vampire bat prefers larger animals. They feed on sleeping cows and horses, for example.

How do bats drink blood?

Thankfully, it’s not scary for the animals that vampire bats feed on. In fact, the animals don’t even know the bat is there.

Bats can sense a sleeping animal’s heat and hear their deep breathing. They land on the animal, make a tiny bite, then lap up the blood. The animal doesn’t even wake up!

As you can see, bats aren’t scary. They serve an important function in the ecosystem. Without bats, the world would be overrun with insects. Humans and animals would catch diseases in much higher numbers, and crops would be destroyed.

Bats are a great way to see if an environment is healthy or not. They are very sensitive, so if there are bats in your neighborhood, it means it’s healthy.

Frequently Asked Questions About What Do Bats Eat

What do bats drink?

Bats drink water. They land on puddles, lakes, calm streams, and even in birdbaths. They don’t usually drink right from the water source, though. They often prefer to lick water off their bodies instead.

What do bats eat in the winter?

Conclusion About What do bats eat

Some bats will migrate in winter instead of hibernating. In that case, bats eat the same things in winter that they did in the other seasons. They just eat them in a different location.