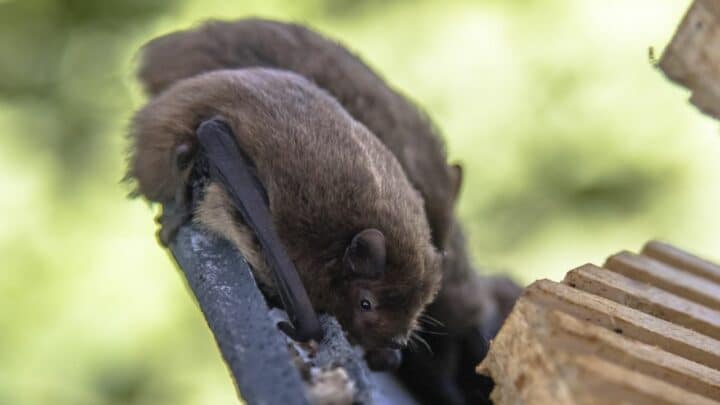 While it is doubtful that any readers own a bat as a pet, many nature enthusiasts may be curious as to where bats live, and the answer to this question may be surprising.

Of course, stereotypically, many people believe that bats reside in caves that are located deep within the wilderness.

The reality is that the answer to “Where Bats Live” is extremely broad. While you may likely insist that there are no bats living near your home, chances are that you are mistaken.

So, if bats aren’t holed up in remote caves, then where are they?

Where Do Bats Live?

While many do still reside in their natural habitat of caves, tunnels, and hollowed-out trees, many others have now become accustomed to suburban living. This means that bats may very well live in your attic, basement, or even your walls. It’s also likely that bats dwell in local churches or barn homes.

You may be thinking that your neighborhood can’t possibly be a hot spot for bats, simply because you’ve never seen one. However, the truth is that bats thrive in many locations throughout the world, including the majority of regions in the US.

Bats seem to prefer temperatures that are consistently between 35 to 40 degrees Fahrenheit, especially when they are hibernating throughout the winter months.

While bats can’t withstand temperatures that are below freezing, if it is too hot, their energy reserve that has been built up by feeding through the warmer months will quickly become depleted.

While certain bat species choose to hibernate through the winter, some species prefer to migrate to warmer climates when the weather starts to get cold.

Although bats may very well not live in your region during parts of the year, most likely they find your area to be ideal throughout certain seasons.

The age-old stereotype of bat roosts hanging upside down in darkened caves isn’t too far from being accurate. Yes, bats do often reside in caves, provided there is one nearby.

However, this is only true with regards to some bat species, while other species seem to prefer trees over caves.

A dead, hollowed-out tree may be the ideal place to call home for some species of bats that are not inclined to cave life.

However, building and development have destroyed many of these old trees that bats once lived in. Although old mine shafts or subway tunnels may suffice for the cave-dwelling bats, many bats have adapted to and become acclimated with urban life.

Once a bat’s natural habitat has been destroyed, they have no other choice, but to adapt to city life. When they can’t locate a cave within the vicinity, subway tunnels often have to suffice.

Bats also seem to like old abandoned warehouses as these buildings are often climate-controlled and are large enough to accommodate an entire bat colony.

Bats don’t chew their way into buildings, as some believe. Instead, they find small imperfections within the structure that they can squirm their way through.

Bats can manage to squeeze through cracks that are as small as 3/8 of an inch in size. They typically prefer to live in older structures that have begun to fall into disrepair as this increases the likelihood of there being cracks in the foundation that they can weasel through.

Many churches in both urban and rural areas meet these qualifications. Churches often stand in the exact way that they were initially built and may continue to stand for decades or even centuries with few repairs being conducted.

Additionally, churches are usually unoccupied throughout the week, which gives bats some semblance of privacy.

While bats seem to have adapted well to urban life, this definitely doesn’t mean that they are true city slickers.

Bats can create a roost in old barns far out in the country, and even in the basements and attics of older two-story suburban homes.

So, if there’s an old barn on the far end of your property, there may very well be bats living inside of the structure.

And if you haven’t been upstairs to your attic in a few years, don’t be too surprised when you find out that a colony of bats has moved in.

Sure, bats do indeed seem to love their caves, but when their ideal home isn’t an option, these creatures are excellent at improvising.

But walls? Really? Yes, bats actually prefer to reside within the walls of a home, as this area often has a consistent temperature. So, if bats can find a way to get inside the walls, they’ll do it.

Where Do Bats Live Naturally?

The ideal roost location depends upon the bat species. While some bats will live in caves or within the crevices of rocks, other bats naturally live in trees. Since much of the world’s land has become developed, many bats live underneath bridges, in old buildings, and in mine shafts.

How Do Bats Choose Where They Will Live?

Bats seek out places that will provide them with shelter to withstand cooler weather, and an ideal location to breed and to raise their young. Bats also stick together in groups for warmth, so they’ll likely seek out locations that are large enough to accommodate the entire colony.

How Long Do Bats Live For?

Since bats are nocturnal, they are able to avoid many daytime predators, which gives them the capacity for a lengthy lifespan. Most bats live for between ten to twenty years, but some species can live even much longer than that.

Whew! A lengthy explanation for the simplest of answers. Basically, bats are very adaptable and can live anywhere and everywhere.

As long as they don’t move into your attic or walls, there’s no reason to be concerned. 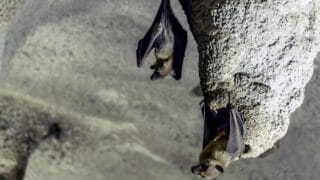 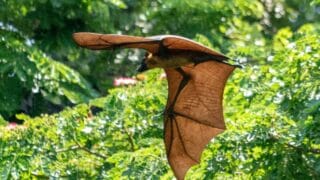 Next
Where do Bats Go during the Day? Let's See!

How Many Mosquitoes Do Bats Eat? Here's The Answer!

[…] people are terrified of bats. However, a creature that is far more frightening is the […]

Where do Bats Go during the Day? Let's See!

[…] you’re interested in bats because you love them, or you’re worried they’re roosting in your attic, you might be […]