Although it may seem to be a topic that piques a person’s interest merely out of curiosity, it actually can be useful to know where bats go during the winter. Surprisingly, they may temporarily move in with you!

Bats hibernate from late fall into the early spring, and while they may seek out a cave or a tree, they can become pretty creative when they need to improvise in finding the ideal place to stay warm through the winter months.

So, what are the preferred places for bats to stay over the winter? And how can you protect your home from becoming a temporary source of shelter for your neighborhood bats?

Understanding bat hibernation is the first step towards avoiding these creatures during cooler weather.

Where Do Bats Go In The Winter?

Bats hibernate throughout the winter months, preferably seeking out a place with a consistent temperature between 35-40 degrees Fahrenheit (-4-4.5 degrees Celsius). While the most natural places for hibernation are trees, caves, and tunnels, much of their natural habitats have been destroyed, leading bats to hibernate in walls, attics, basements, warehouses, barns, and churches.

Bats Hibernate in Trees and Caves in the Winter

Before humans began to build and develop on the land, bats had plenty of natural places for hibernation.

Stereotypically, bats are strongly associated with caves, and if a cave or old mineshaft is nearby, bats will usually spend the winter months there.

Bats can burrow deeply within a cave and effectively find a spot with the ideal temperature. Since bats rely on each other for warmth throughout the winter, caves offer the added benefit of a space that is large enough to accommodate an entire bat colony. 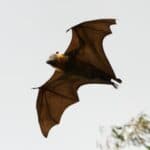 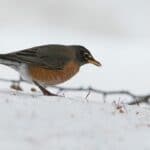 Old tunnels and subways are also ideal places for bats to spend the winter.

Bats also like to burrow inside hollowed-out trees, but many dead trees that would’ve been ideal for hibernation have been cut down in the interest of development, which has made it challenging for bats to continue to hibernate in their natural habitats.

Bats Hide Out in Churches and Barns in the Winter

If you happen to have an old barn on your property, there’s a good chance that it will become a temporary home for bats during the winter.

Barns provide a large space for a group of bats on top of being a source of warmth and shelter that is usually within the temperature range that bats prefer.

Since churches are often unoccupied throughout the week, bats often seek shelter in churches during the winter months.

Many churches are older buildings which makes it easier for bats to slide their way into the structure and make it their temporary home.

Bats can squeeze their way into an opening that’s as small as 3/8 of an inch. While they don’t chew their way into a building, they are experts at finding small cracks and imperfections in the foundation that they can weasel their way through.

Bats Hibernate in Old Warehouses During the Winter

Warehouses are another place that bats seem to enjoy hanging out in (literally hanging) throughout the winter months. Once again, warehouses are large areas that can accommodate a bat colony in addition to usually remaining around the correct temperature for a bat.

Now, why is temperature so important?

Bats live off bugs, and their food supply is drastically reduced during the colder months, which means that the bats need to conserve the energy that has been built up by eating throughout the warmer portion of the year.

When bats hibernate, temperatures that are too hot will deplete their energy reserves, but they will freeze if the temperature in the environment is too cold.

Additionally, bats lean towards places that have a steady water source, so a barn, church, or warehouse that’s close to a lake is an ideal spot for a bat to hibernate.

Unless you work in an old warehouse or factory, you may not be too concerned about a bat colony claiming the business as their winter home, but what would you do if the bats moved into your house to spend the winter with you?

Bats Move into Attics, Basements, Chimneys, and Walls in the Winter

Yes, a colony of bats may very well move into your house in the winter, especially if your home is a couple of stories high.

Bats are able to get into homes by flying through open windows, crawling down chimneys, and shimmying their way through cracks in the walls.

Bats are drawn to older homes that have begun to fall into disrepair as it is more likely that they’ll be able to find a slight imperfection that they can breach in order to get inside.

Ideally, walls are the most preferred place within a home for a bat to hide out during the winter, but this isn’t always possible for a bat to achieve.

However, that won’t stop them from moving their colony into your basement or attic. Most often, bats are simply seeking warmth through the winter.

They aren’t there to harm you or bother you in any way, even though the idea of sharing your home with bats may give you the creeps.

Since they are inclined to a particular temperature, a slight change in your thermostat setting may cause the bats to suddenly soar through your living room.

While they are just relocating to a spot with a more comfortable temperature, this move can have your family screaming in fright.

Frequently Asked Questions about Where Bats Go in the Winter

What Attracts Bats to Your House?

The same things that attract any other animal to your home will also attract bats. Very simply, bats are seeking food, water, and shelter, and if your home provides these amenities, bats will be drawn to it, especially if they can find a way to get inside.

Will a Bat Attack You?

Bats do not attack humans. If they swoop past you, they are likely seeking food or warmth and have no intentions of harming you.

Are Bats Dangerous in a House?

While bats often do have rabies, it’s unlikely that they would attack you, especially in your own home. The biggest danger with bats being inside your house is bat droppings, which can contain serious diseases.

So, where do bats go in the winter? Basically, anywhere that’s the right temperature, from caves to trees to your attic.

However, securing your home prior to winter can prevent bats from getting into your house, so that you can keep unwanted winter guests out of your home.

How Do Bats Poop? Sounds Interesting!

[…] Bats spend a remarkable amount of time hanging upside down by their feet. They sleep that way, some species mate that way, give birth that way, and even die that way. […]