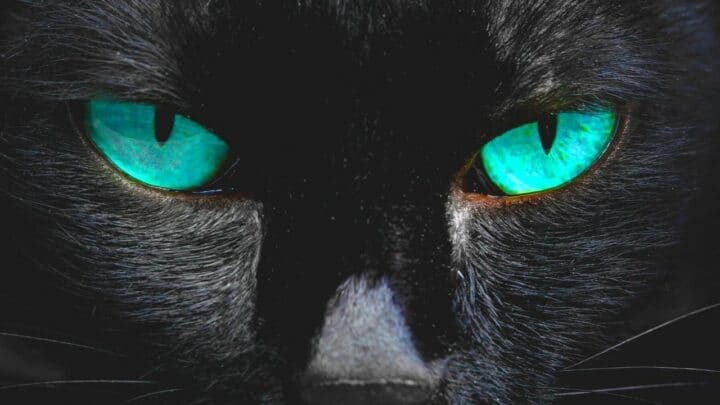 A cat’s eyes are the most mesmerizing assets that felines have compared to other animals in this world. Coming in various hues and shades, it’s impossible for us not to stare in awe at them.

But did it cross your mind how cats see the world around them? Do they see their surroundings the same way we, humans, do?

Well, if this question intrigued you, continue reading below to find out the answer yourself.

What do cats see?

Unlike the sharp and colorful vision that humans have, felines see the world in a more muted, pastel-like hue. Though cats are trichromats (living things possessing three kinds of cones), they have trouble differentiating red shades. Also, felines are nearsighted as their eye structure lacks the muscles needed to adjust the shape of their lenses accordingly. Thus, a cat can better see objects placed near him than those further away. Though they can’t appreciate color and distant objects, cats pride themselves on their superb peripheral and night vision. Since their eyes have more rods and a mirror-like structure behind their retinas, it’s easier for cats to differentiate objects at night.

What makes a cat’s eyes different than humans?

Technically, a cat’s eyes hold the same function as human eyes. But, the optical organs of cats function differently thanks to some unique structures.

For one, both cats and humans have a tissue layer behind their eyes called a retina. The retina contains photoreceptors that convert the light rays into electrical signals for the nerve cells to process.

But, there are two kinds of photoreceptors inside the retina. The first one is what we call the rods, responsible for both peripheral and night vision.

Aside from the first two functions, rods also sense brightness as well as shades of gray. Simply put, these rods allow both cats and humans to see at night.

The other photoreceptors are cones, which are the reason behind day vision and color perception.

But, in cats, the retina contains more rods than cones, allowing them to see things better at night. Even if they have better night vision, felines can’t distinguish colors properly as a result.

Their pupils can also dilate up to three times their average size to let more light inside.

How do felines perceive color?

Most of us think that cats see only in monochrome, making them see the world in shades of gray only.

But, like humans, felines are also part of a particular group of living creatures called trichromats.

Trichromats have three different cone types that allow them to see red, blue, and green shades.

Though they’re considered trichromats, a feline’s cones don’t function in the same way.

Unlike humans, cats can only detect shades of green and blue. Though they can still see red, cats are much less sensitive to them than humans do.

Think of them like a human diagnosed as color blind for red shades.

Hence, when a cat comes across objects that come in shades of red, it becomes confused. Felines will think that red is a deeper shade of red, while purple’s a bluer blue.

Another significant difference that cats’ eyes have with their human counterparts is their resolution. While humans have 20/20 visual acuity, a feline’s visual acuity ranges from 20/100 to 20/200.

What does it mean? Simply put, a cat can only focus on objects that are approximately 20 feet away from them.

Thus, if you make felines focus on objects that humans can still see at around 100-200 feet, all they see is a big blur. It’s like the cat sees those items behind a thick haze.

But, while you’re possibly lamenting on this fact, a cat’s nearsightedness is all thanks to its eye structure.

A feline’s eyes don’t have the same muscles that allow human eyes to adjust the lenses’ shape to fixate on objects at various distances.

Hence, if you’re planning to play with a cat, make sure to place the objects 6 to 20 inches away from them.

Yet, if you place items nearer than 6 inches, cats cannot properly focus on them. Don’t worry, though, as the whiskers on their faces help felines with close-range object perception.

Though most of you think this is such a bummer for kitties, you don’t need to buy them glasses. In fact, a feline’s nearsighted vision becomes a huge advantage for hunting and catching its prey.

Despite their nearsightedness, cats have a wider visual field compared to humans.

Though it’s only slightly higher than humans (200 degrees for cats, 180 degrees for humans), this trait aids felines during hunting prey.

How do kitties see better at night?

Everyone knows how cats love to roam around at night. In fact, felines are highly crepuscular, preferring to hunt more from dusk to dawn.

While most of us think this is because of their night vision capabilities, you’re entirely wrong.

Their superb night-hunting skills are all thanks to a set of structures in their eyes that work together to achieve this feat.

First, as mentioned above, cats’ eyes have more rods than cones. Though this makes them less appreciative of color, more rods allow felines to become more sensitive to low light.

In fact, their rods refresh so fast that felines can detect rapid movements.

Thus, even the slightest quiver of a nearby object can jumpstart felines into action.

Aside from rods, the elliptical shape of their eyes and larger corneas allow cats to gather more light.

Combine this with the tapetum (tissue layer that reflects light to the retina); cats can pick up light up to seven times lower than humans.

If, however, the environment’s too bright, then cats can simply contract their irises into slits. In that way, they can prevent potential damage to the delicate retina inside.

So, if you ever wonder what cats see in their world, refer to the information above. But, if you prefer a more detailed discussion on this, then ask your beloved vet about it. 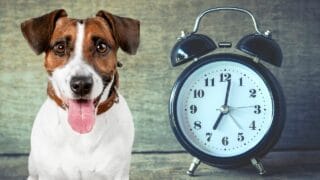 Previous
How Long is an Hour in Dog Time? — Revealed! 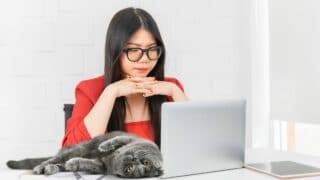 Next
How to Get a Cat to Leave You Alone? — Try This!