That cute moment when you catch your kitty companion with their tongue out? That’s called blepping, and it’s completely normal.

While we may never know the true origin of the word blep, the action itself is instantly recognizable.

It is both adorable and bizarre, but there are very sound reasons for this unconscious behavior.

Why do cats blep?

When a cat bleps, it’s usually associated with what we call the flehmen response, which is the act of opening the mouth and collecting pheromones on the tongue. Other reasons for blepping include complete relaxation, anxiety or muscle medication, missing teeth, or breed-specific issues.

What Bleeping Exactly Is

Most cat owners have experienced their beloved felines taking a sniff of something and immediately responding with their mouths agape, seemingly in horror.

This curling back of the lips and opening of the mouth is known as the flehmen response. It is not the same as a blep but often precedes a blep.

The flehmen response is what our kitty companions use in gathering their environment’s information.

Cats can essentially ‘smell’ the environment with their tongues by picking up scents and pheromones and driving them to their vomeronasal organ, located on the roof of their mouths. 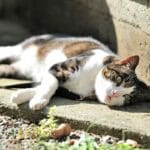 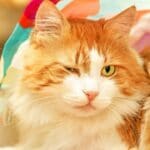 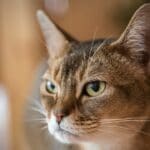 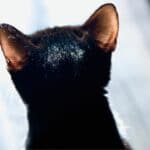 Cats may use this ability to gather information about other cats, prey, or simply to make you feel bad about your dirty laundry.

Depending on how interesting a smell is, a cat may become distracted and forget to retract its tongue.

What results from this is the comical expression of a closed mouth with the tip of the tongue remaining exposed, otherwise adorably known as a blep.

Do Cats Blep In Their Sleep: The Answer

It is commonly believed that when cats reach the ultimate peak of relaxation, or if they are in a state of deep sleep, they may unconsciously slacken their jaws, allowing for part of their tongues to escape.

Therefore, it is entirely possible for cats to blep in their sleep.

Similarly, when some kitties embark on vigorous grooming sessions, they may momentarily forget to retract their tongues.

Although extremely cute, this is usually quickly rectified by an embarrassed feline.

Cats with a nervous disposition may be required to take a calming or anti-anxiety medication. Similarly, some cats may need muscle relaxants or similar treatment for pain.

Any of these can cause the odd bit of blepping, as the cat is in a higher state of relaxation.

This is not a cause for concern. Cats on meds likely do not even realize they’re blepping in the first place.

Older cats, or cats with dental issues, may not have as many teeth as the average feline.

This could result in increased blepping, purely because a cat’s canines help to keep the tongue safely ensconced in the mouth.

Without all its teeth, there is a chance that your feline friend may experience an occasional unconscious slipping out of the tongue.

This is hard to say with any certainty. Some believe that flatter-faced cats, like Persians, are more inclined to blep.

The motivation for this belief is the lack of space in their mouths. Others claim that cats with more oversized tongues blep more for the same reason – too little mouth area.

When A Blep Is A Sign Of Medical Distress

Sometimes, blepping can indicate serious medical issues, although it will usually be in tandem with other symptoms.

Heatstroke, for example, will leave a cat with its tongue sticking out and very red in color. They may also be panting and drooling.

This is profoundly serious, and cats need to be cooled down gradually and taken for medical treatment.

Motion sickness, poisoning, and respiratory infections will also cause blepping, panting, drooling, vomiting, and in the case of the latter two conditions, difficulty breathing.

Issues with a cat’s teeth and gums, such as periodontal disease and stomatitis, may cause blepping accompanied by bleeding teeth or gum ulcers.

In the case of cats with dementia, blepping may be accompanied by agitation, persistent meowing, and forgetting basic behaviors like using their litter boxes.

If your feline’s experiencing any of these symptoms, they need medical treatment as a matter of urgency.

Frequently Asked Questions About Why A Cat Bleps

Do cats have short attention spans?

In general, cats are known to have excellent memories and are very capable of being hyper-focused. However, their attention spans depend on their environments, age, intelligence, and genetic dispositions. With cats being cats, they may just tire of one thing quickly and move on to the next, thereby giving off the impression that they are distracted.

How much heat can cats tolerate?

Can you train cats to blep?

Training cats to do anything can be tricky, but cats respond well to positive reinforcement. If their bleps are met with coos of praise and treats, they will quickly figure out that blepping is the way to their owner’s heart.

Cute cat bleps have ruled over the internet, and it’s easy to see what’s causing all the ruckus.

Kitties are considered regal and aloof, and these rare moments of ridiculousness are the perfect antidote to that perception.

The next time you catch your cat blepping, make sure to take a snap. You can use it to blackmail them later.