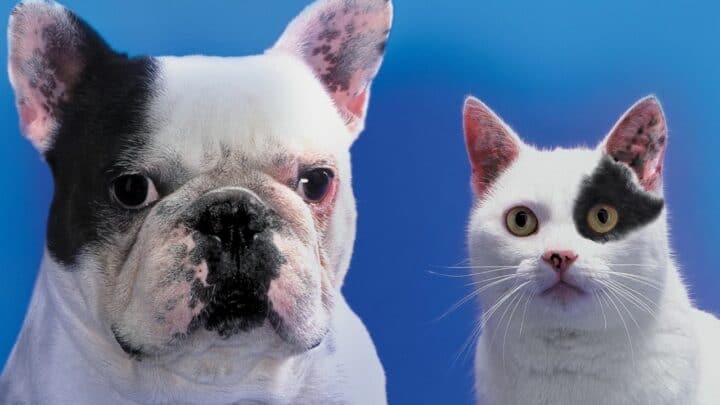 Playful. Lively. Sociable. These are just some of the adjectives that best describe a French bulldog if you search on Google.

Even if this special breed of canines has a more unique temperament than most of their peers, they’re still too loveable to resist taking them into our homes.

But, while we may be tempted to adopt this dog breed immediately, you’ll need to find out first if they’ll easily get along with your other pets in the house, especially a cat.

So, if you’re quite hesitant if French Bulldogs are a great companion for your feline pals, then better stay tuned and find it out in this article.

Are French Bulldogs good with cats?

Yes, they are! French Bulldogs are great with cats. Since this dog breed’s naturally amiable and easily gets along with its peers, you’ll have no worries making these two animals the best of friends. But, before you and adopt one, you need to find out first if that particular canine’s not aggressive when a cat goes near it. If the pup’s friendly enough to tolerate a feline’s presence, then gradually introduce them to each other.

How to Determine Whether a French Bulldog Is Good with Cats

Before bringing home a bulldog puppy or adult dog, learn more about this breed’s behavior in general, along with what makes it a perfect match for cats.

In most cases, French Bulldogs are very good with cats. However, you will need to be sure that the dog has not been taught to be aggressive towards cats.

While this is not common, some dogs have been trained to attack cats or other animals. However, in normal situations, the lack of fear for cats is quite common in French Bulldogs.

One must also note that in dog and cat groups, the animals’ sound and sight can make them feel uneasy and may cause them to feel aggressive toward one another.

If you have a group of cats and dogs in your home, ensure that you monitor the animals carefully to prevent unnecessary conflict.

You must know how your pet will react if you introduce a cat into your home. Many French Bulldogs do not typically show aggression towards them.

Still, it is ultimately up to you as the owner to determine if this breed will be compatible with a new animal.

If your dog has ever shown aggression toward cats, you must use extreme caution when introducing a new pet cat into your home, even when they’re merely playing.

Introducing a French Bulldog and A Cat: The Basics

If you’re considering getting both a bulldog and a cat, keep in mind that introducing them is best done when they’re young. Introducing an adult dog can be more difficult.

To ensure the process goes smoothly, begin by getting the dog used to spending time around cats before bringing one home.

For example, take him to volunteer at a local shelter or let him play with other cats on your property. With this groundwork laid, you can make the introduction more easily.

It would be best if you did not allow the two animals to meet in an enclosed area. This means that you should have separate areas in which they can interact safely, such as your bedroom or living room.

If this isn’t possible, be sure that all doors and windows are closed before letting the dog into the house with the cat.

One of the best ways to ensure animal safety is by using a puppy play mat. This allows your pet to explore his new surroundings freely while also providing him with a place for naps and playtime with other animals.

If a French bulldog and a cat never had a chance to interact, it’s unlikely they’ll eventually be friends.

For the pets to form a lasting partnership, you should introduce them early on to get to know one another before any of them has an opportunity to make judgments based on initial reactions.

Ideally, the dog has a personality that matches well with the cat’s own. If the bulldog is aggressive or overly dominant, it’s likely to scare the cat away with its approach.

On the other hand, if your dog is timid or submissive and fearful of cats, it can frighten them too.

If your cat or dog becomes aggressive, it is best to keep them separated for a few days to give them time to calm down.

Cats can be very territorial, so if you have a situation where they become aggressive toward your dog, you must keep them away from each other for at least several days.

After this period has passed, try reintroducing the animals by placing them together on a screened porch or behind a door while you are in the room with them.

If this does not help, try talking to your veterinarian about using medication for the cat to relieve their anxiety during this period.

Bulldogs have an amiable personality and often get along well with other breeds. Some adjectives to describe its temperament include affectionate, mellow, and social.

They’re also very fun-loving and enjoy the company of their humans.

When around other animals, especially cats, they can be friendly or assertive depending on their mood at that moment.

They enjoy being around people and don’t mind being held, cuddled, or kissed! This is one of the main things that make them a popular choice as companion pets.

Cats have distinct individual personalities. Most are independent and don’t like to be bothered by other animals, but others enjoy the company of dogs and even view them as playmates.

However, regardless of their feelings, they usually maintain a safe distance from a canine companion and let him know when he’s overstepping boundaries.

All cats have the exact basic instinctual needs of survival and adoration; however, they don’t all have the same reactions to how best to accomplish them.

Some cats are naturally more inclined to ignore or rebuff attempts at forceful engagement, while others are more tolerant.

While a cat is generally considered tame, it is still a wild animal and may desire to interact with humans and other animals.

Generally, French Bulldogs make great pets for families with older children or families who want a gentle dog and prefer to be near other pets. They are very active dogs, so a fenced yard is essential.

French Bulldogs can live in an apartment or smaller house if they get enough exercise and require about the same amount of daily exercise as some larger dogs.

But, you must pay close attention to your dog’s and cat’s behavior when introducing them to one another.

It may take some time for them to become comfortable with one another, but they will learn how to get along if you are patient. You must not force the animals together if one of them seems agitated or afraid.

In many cases, just allowing your dog and cat to get used to each other on their own can result in them becoming best friends. 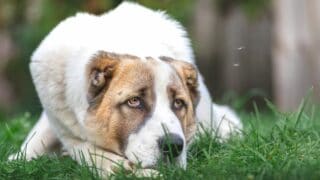 Previous
How To Keep Flies Off Dogs — 8 Great Tips! 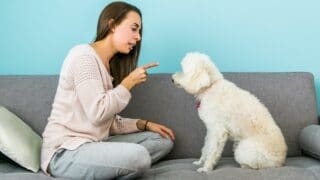 Next
How to Keep Dogs Off Furniture — Works Like a Charm!