Cats are amazing animals. However, their behavior can be questionable, especially with other cats in the home.

I have witnessed my male cat biting both my female cat’s necks. This has happened on several occasions.

My female cats are tolerable towards his behavior for a little while, then they make their escape.

Why Does My Male Cat Bite My Female Cats Neck?

Male cats bit female cats’ necks as part of mating behavior. It can also show a sign of dominance and a male cat marking their territory. This behavior can also be a sign of illness and sometimes it is simply an act of playing. 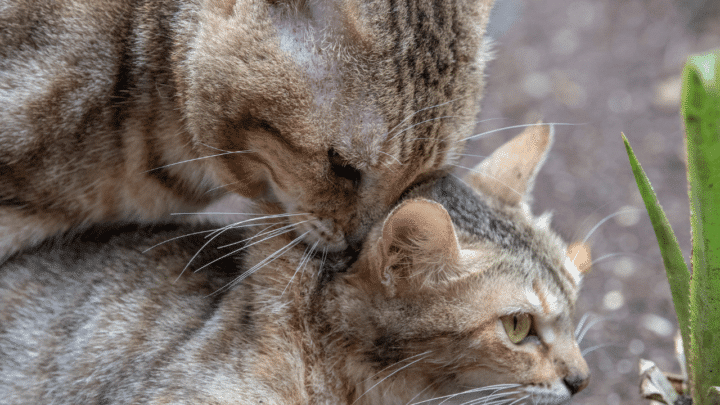 Mating is the most common reason a male cat bites a female cat’s neck. It may seem like an aggressive action, but it is a natural part of the mating process.

When the female howls, the male cat’s organ spikes and that causes him a great deal of pain. He bites her neck for two reasons.

The neck biting stimulates hormones and ovulation in the female cat. It’s necessary for the female to become pregnant.

It also holds the female in place, so she doesn’t move and causes more discomfort for the male or interrupts the mating process.

The sound the female cat makes is a screeching ear-piercing sound that makes my skin crawl. It sounds like the male is hurting the female.

The male does not hurt the female by biting her on the neck during mating. It is not a hard aggressive bite.

It is a gentler bite that does not cause pain or break the skin.

After mating is completed, the male cat releases the female. This behavior is seen in domestic cats and wild cats. 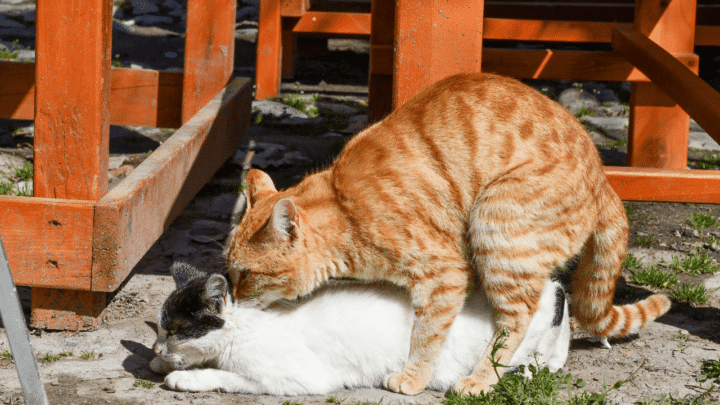 A male cat will bite a female or another male cat on the neck to show dominance. While the bite does not hurt the cat, it keeps them still and they cannot move.

This action shows that the biting male cat is demonstrating he’s in charge. I noticed my male cat did this every time my female cat went near the cat tower.

My male cat did not want to share and, apparently, he thought this was an expectable way of demonstrating his beliefs.

However, my female cats continued to return to the cat tower and each and every time he would proceed to bite them on the back of the neck.

Once he released them or they wiggled out of his grip, the females would stay away from the cat tower for a little while.

They always returned and, whether he was there or not, the females continued with their attempt to find a nice soft place for a nap.

Oddly, sometimes my male cat let the females climb the tower and lay down – he would have a look of defeat but that never stopped him from trying to insert his dominance, it was a daily event. 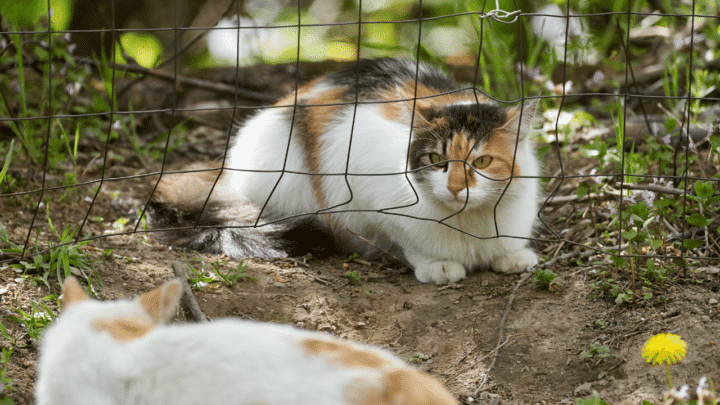 Cats are territorial, even domesticated cats still are

Cats in general are territorial animals, even domestic cats. It’s easy to understand why and how a wild cat protects its territory.

It is certainly a frightening thought to even imagine stumbling onto the territory of a tiger or a lion.

While domesticated cats are no match for their wild counterparts, they are just as territorial in their own right.

Which is another reason male cats will bite females and other male cats on the neck. It is an attempt to scare them away, but can sometimes doesn’t work.

Domesticated cats, either male or female, both have strong personalities and can be aggressive towards each other when they both want the same thing. It is not likely the cats will share.

In cases of fighting over territory, not only do the males bite the females on the neck, they show other signs of aggression.

Domestic cats, unless they are from the same litter and sometimes that doesn’t even matter – will not only fight over the territory. They will fight to see who is the stronger and, ultimately, the winner is in charge.

In the wild, this is very common. Young cats are always trying to take the leader spot, in a pride. It’s their rite of passage.

This act is also common in domestic cats when there is more than one.

Being in charge of a territory is a sign of strength which, in return, is a sign of respect. Therefore, there is a pecking order.

Mature male cats believe they are at the top of the order. The females and smaller cats are below them. 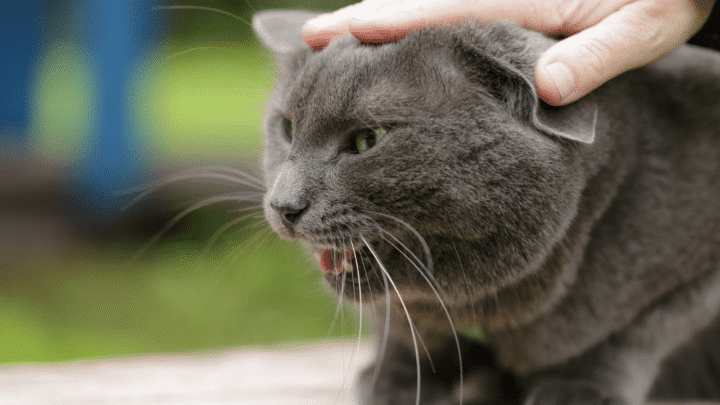 Ill cats might act aggressive and bite other cats necks

My cats can’t tell me when they do not feel well or are in pain, so they do their best to show me. Unfortunately, my female cats are targeted.

Cats that are ill or in pain will bite the back of a female or even a male cat’s neck in the house as an attempt to gain your attention, even if it is negative.

Male cats in pain will also show signs of aggression such as swatting, hissing, and even attacking the other cat.

If this is uncommon behavior, a visit to the vet is warranted. 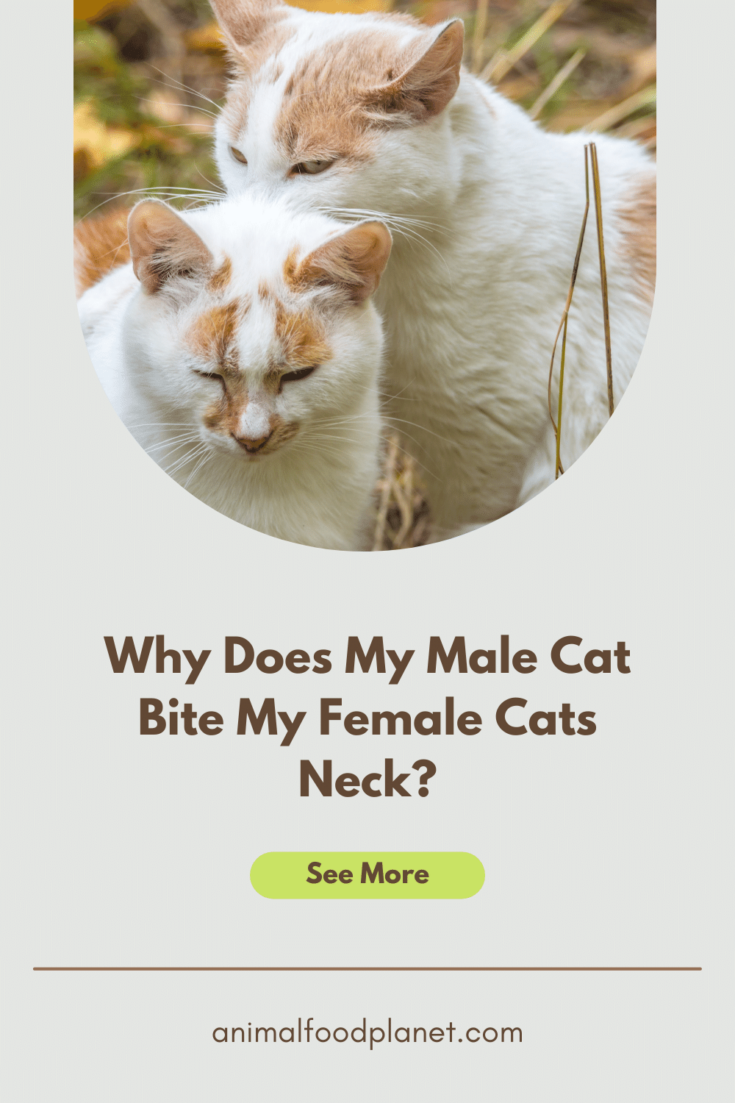 Why Does My Male Cat Bite My Female Cats Neck

According to VCA hospitals neutering cats is a common practice to make companionship work and prevent unacceptable sexual behavior.

Male cats that have been nurtured will sometimes still bite a female and even a male cat on the neck. Obviously, this action is not an act of mating.

With my male cat, I could tell he was agitated.

I had just brought home a new female kitten. He would not only bite her on the neck, but he would swat her when she walked by him. He was clearly jealous.

I also had an older female cat at the time, and they had also gotten along. I got them both at the same time and he even started biting her on the neck.

His signs of aggression towards my older cat were mild compared to the kitten.

He was showing signs of dominance and space.

He wanted to ensure the new kitten knew her place.

Toys as a Distraction 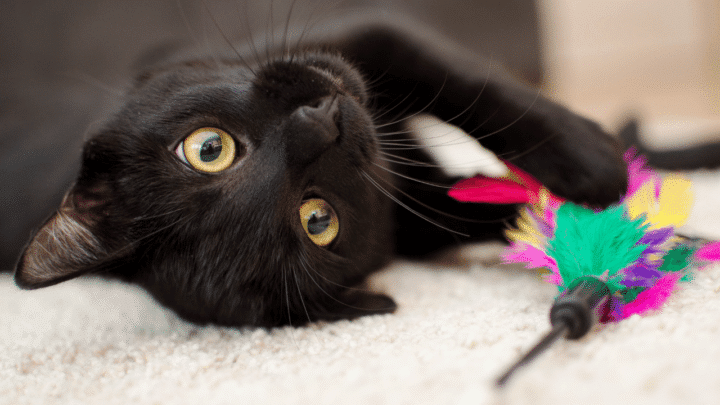 I got my male cat some toys that were just his and this allowed him to take out his aggression and dominance without harming the female cats or himself.

Eventually, he did settle down and accepted the new kitten.

The most common type of aggression is play aggression.

It is important to note that aggression in cats is normal as it is a common trait in mammals.

Especially if they are young according to Cummings Veterinary Medical Center.

How do I introduce my male cat to a new cat without problems?

Introducing a male cat to a new cat without problems needs to be done slowly. Male cats are territorial. If your new cat is a female, it will be easier than with a male. Let them sniff each other and get a sense of one another. It may be a good idea to keep the new cat out of sight and only allow a few minutes of introduction time several times a day for a few days. Let your cat know the new cat is not there to replace him. Continue to give your male cat lots of love and attention. First, your male cat is likely to show all the signs of dominance. Once the new cat has settled in, your male cat will adjust. They may never be best friends, but they will learn to co-exist.

Why does my male cat bite my spayed cat’s neck?

Male cats will bite a female spayed cat’s neck as a sign of dominance and to mark his territory. Once he gets used to the new cat, this behavior will stop.

Male cats bite female cats on the neck as part of the mating process, to show dominance, to mark their territory, and if they are sick or have an injury that is causing them pain.

If a male cat continues to bite a female cat on the neck for no known reason, bring them to the vet for a check-up and to help resolve that undesirable behavior.

Read about why do cats wag their tails while lying down next.

How Many Bones Do Cats Have? Wow! Now I Know!

[…] me, cats have always contained an element of the magical and mystical. When I began wondering how many bones […]