Ever wondered what kind of food your canine buddies can eat?

Well, if it’s your first time taking care of a dog, you’ll indeed find it nerve-wracking to plan a meal for your best bud.

But, veteran fur parents know what meals to prepare that are both nutritious and tasty for the pups.

While it’s common to see fur parents dole out meat and doggy biscuits, will mutts also accept fish as part of their diet?

If you can’t contain your curiosity any longer, start reading the article below to find the answer out.

Canines are omnivores like humans. Dogs will eat fish. The omega-3 fatty acids make fish an excellent alternative protein source – aside from making its smell irresistible to dogs. But, while dogs will eat fish, not all seafood is good for them. In choosing what fish to feed canines, make sure to look at the lifespan, size, and bone structure of the fish you provide to your dogs. The right preparation method also plays an integral part in ensuring eating fish is safe for your dogs.

Lifespan, in simplest terms, refers to how long a certain kind of fish lives. While it’s a good thing for fish to live long, it doesn’t spell the same when mercury toxicity gets in the picture. 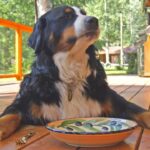 Technically speaking, the longer the fish lives, the higher the mercury level in its body. Since our oceans aren’t as pure as they were before modernization, it’s expected that toxins are present as well.

With that in mind, keep your puppy away from mackerel, sea bass, and tuna at all costs. These fish species contain the highest mercury levels, ultimately posing a grave threat to your canine.

Like lifespan, fish size also directly correlates with the mercury levels inside a fish’s body. The larger the fish is, the more mercury and toxins accumulate in its body.

How can this be possible? Well, small fish mainly eat algae and other microscopic biotas in our oceans, right? The larger fish, on the other hand, prey on the small fish for a sumptuous meal.

Since larger fish eat the smaller ones in bulk, they inadvertently consume large mercury quantities as well.

Like other vertebrates, fish also have bones. Unfortunately, different fish have varying bone structures, making some of them riskier for dogs to ingest.

To be safe, choose fish that don’t have brittle bones. They can tear through a dog’s intestines and cause bleeding should they make it there.

Brittle bones are also choking hazards to our canine buddies. They can lodge on the dog’s esophagus and potentially block the passage of air through them.

Aside from the three criteria mentioned earlier, how you prepare the fish also affects its safety as a meal to dogs. While it’s tempting to let canines try out eating raw fish, it indeed isn’t the best idea to try.

Though raw fish is indeed packed with nutrients, it contains worms and flukes that can make them sick instantly.

Also, raw fish potentially carries bacteria like listeria and salmonella. Not only do these microbes harm dogs, but they also can make anyone in your family sick.

But, let’s not condemn raw fish consumption immediately. If you properly clean and freeze raw fish for a few weeks, it’ll lessen the chances of risking your pup’s health once he consumes it.

Just make sure, to completely thaw the fish first before serving it to the dog.

How to cook fish for canines?

Between serving raw and cooked fish to our beloved furballs, doling out the latter is a much safer option. Though it’s safer, you need not be so keen about the technicalities of how you’ll cook the fish.

Whether you grill or steam the fish, it doesn’t matter. What’s important is that the fish’s cooked to the core and that you didn’t mix any seasoning in them.

But, if you’re considering frying, you’ll add unnecessary calories and fat to the fish, what with the butter or oil you’re using. Hence, it’s better to stick to the first two options mentioned earlier.

Why can dogs eat fish?

Most of us think that dogs are carnivores or meat-loving animals in simpler terms. But, contrary to popular belief, though, our canine buddies are omnivores.

Omnivores are unique in that they’re capable of eating plant- and animal-based products. Thus, like humans, dogs can also eat veggies, fruits, fish, and meat products.

So, what makes mutts omnivores? Take a look at these tell-tale signs according to scientific evidence.

Unknown to most of us, our teeth’ shape determines what food we’re capable of consuming. Herbivores technically have molars to make it easier to grind plant parts.

Carnivores have large and sharp incisors capable of shredding the meat into pieces.

As with omnivores, they both have molars and incisors, making them capable of consuming both plants and meat.

Since canines have both molars and incisors, then it’s clear evidence that they’re omnivores. Hence, fish can also be a part of their staple diet.

Aside from the teeth, the length of their digestive tracts also plays a role in the kind of food animals can process.

For omnivores like dogs, their long digestive tracts make it possible to digest plant material better.

Also, a longer digestive tract allows enough time for the body to absorb the nutrients from it.

How much fish is enough?

Eating in moderation is always one of the medical advice doctors tell their patients. And, while dogs come from a different species, the same rule holds for them.

Since fish also comes with healthy stuff, fur parents might be lured into the trap of feeding canines large portions of it. With that, we inadvertently put the risk of obesity on our canine pals.

Thus, it’s best to keep watch of the portions you’re doling out to your mutts. Since we mainly feed mutts with well-balanced dog food, think of fish as a treat.

And, since it’s a treat, you should serve fish not more than 10% of your dog’s daily diet. But, if you’re still hesitant, better ask your veterinarian about it.

What fish are best for dogs?

As mentioned earlier, not all fish are suitable for your canine’s health. With the criteria stated previously, here are some of the fish species you can serve your pups with.

What fish to avoid?

If there are fish best for canines, there are also fish that pose a threat to their well-being. Since they can contain high mercury levels, you should refrain from serving these fish to your pups.

But, if you’re a fur parent that wants to engage in a thorough discussion of their nutrition, better ask a vet or a nutritionist for details.