This question may sound unimportant until your dog refuses to eat for several days. There are several reasons why your dog may not eat. The most common reason why dog’s refuse to eat is sickness.

Many of their ailments suppress their appetite. This article explains how long dogs can survive without food, and it also explains how to get your dog to eat if he refuses to eat.

How long can dogs go without food?

Generally, dogs can survive without eating for about 5 – 35 days, depending on certain factors. These factors are the physical condition of your dog, his health status, and whether he drinks water or not.

The fat reserve of your dog will play a role in how long he can stay without food. Fat dogs are likely to stay longer without food.

Dancer, a blind dog that got lost, lived for about 35 days before he was found. When found, he was a shadow of himself. He was overweight when he got lost, but had reduced to only skin and bones when found.

If he wasn’t overweight, he won’t have been found alive. 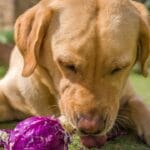 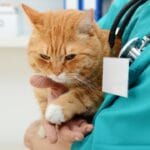 This one is self-explanatory. Without food, sick dogs will likely die faster than healthy ones, with all other factors being equal.

Drinking of water will sustain your dogs for a few more days. So, a dog that is still able to drink water will surely outlive the one that neither eats nor drinks.

Why will a dog stop eating?

Although there may be countless reasons why your dog won’t eat, these reasons can be categorized into only three.

Some dogs are quite picky with their food. They don’t just eat anything. If you serve such a dog with just any food, he’s likely to sniff it and move away.

One challenge with picky dogs is that the foods they don’t eat are usually more than the ones they eat. So, it may be difficult to get what your picky dog likes.

This kind of problem requires patience. You’ll have to try different dog foods before you get the one your dog likes.

Just like humans lose appetite when they are sick, dogs do the same. Furthermore, when a dog is going through pain, he’ll find it difficult to eat.

In fact, the more severe the pain, the less likely he will eat. You know what makes this situation a difficult one?

Even if your dog begins to receive treatment, it may take days or weeks before the pain resolves completely, and he might refuse to eat until then.

If you don’t do anything about it, refusing to eat is likely going to trigger another health issue. This is why you have to improvise. We have discussed ways by which you can make your dog eat in this article.

Two mental conditions that will impact your dog’s ability to eat most are depression and anxiety. A lot of people don’t realize that dogs get depressed too. The biggest cause of depression in dogs is bereavement.

If you have two dogs that have been together for years, and one of them dies, don’t expect the other one to shake it off easily.

The circumstances surrounding the death can make things even worse for the other one. For instance, if he got run over by a vehicle and your other dog witnessed it, he will be depressed for days or weeks.

There’s a reason dog is said to be man’s best friend. If a family loses one of them, other family members are likely to get over the death faster than the family dog, especially if the dead one had a strong bond with the dog.

There have been cases where someone got injured and rushed to the hospital and his/her dog would run after the ambulance for miles till it (ambulance) got to the medical facility.

If such dog was put on a leash and left at home while his owner was being rushed to the hospital, do you think he’ll eat? It’s a big NO!

Anxiety is another mental condition that knocks food down to the bottom of your dog’s preference list. However, it’s not every time that anxiety impacts your dog’s appetite.

Since he needs your attention as much as he needs his food, being separated from you could trigger anxiety.

Poor socialization can also cause anxiety. When a new dog or human comes around, it could make your dog anxious for as long the stranger remains in your house.

How to get your dog to eat

When you notice that your dog no longer eats, this is how to handle it.

Give him some time

When a dog refuses his food, he usually comes around after a few hours later. So, you can give your dog a few hours, but don’t let it exceed 24 hours.

Try to find out why

If he still does not eat his food after a few hours, you need to take action. Try and do a mental research. Is this the first time you’ll give him the food? Maybe he doesn’t like it?

Perhaps you added additives that he finds offensive. All these should come to your mind if he had sniffed the food before turning back.

Try and give him any of his favorite snacks. If he takes the snack, it means he doesn’t like the food you gave him earlier.

But what if he didn’t even go near the food? It may be a sign of serious ailment. If he doesn’t take the snacks as well, you need to contact your vet as quickly as possible.

You could give him an appetite stimulant

This method works for a dog that does not eat as much as he used to eat. It won’t work for a dog that’s not eating at all. If he doesn’t take his favorite snacks, he won’t take any stimulant.

Engage him in vigorous activities for hours. Though it is fun, vigorous games can drain energy and drive up your dog’s craving for food. Besides, being able to run around means that his lack of appetite is not caused by any underlying medical condition.

If your dog isn’t eating, your best bet is to take him to a vet, and forcing him to eat is the worst. Finally, as mentioned earlier, a dog can survive without food for about 5 – 35 days, but you need to handle the issue like he won’t make it beyond 5 days.

[…] Most dogs won’t take either food or water from strangers. That’s why if you take your dog to visit a friend, don’t be surprised that he won’t drink water from the water bowl presented to him. […]