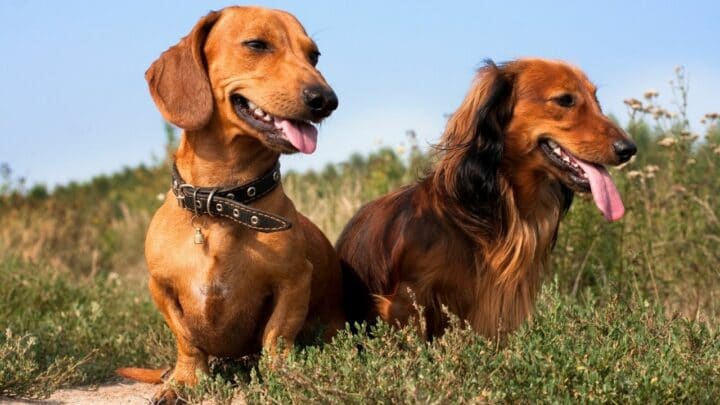 Dachshunds are an adorable breed of dogs that will make your family happier. But if you’re wondering what type of dachshund you should get, worry no more!

We took note of the similarities and differences that standard and mini dachshunds have.

Knowing a little more about them will help you decide which type is meant to be your best friend for life.

Similarities and Differences of Standard and Mini Dachshund

There are a few similarities between the standard and mini dachshunds such as being hard to train, having various coats, colors, and patterns. However, dachshunds and their mini counterparts have a lot to differ in terms of their weight, height, activity levels, proneness to certain diseases, popularity, and price.

Maybe the reason why you’re interested in a dachshund is that you like to have a small dog. Then, knowing their standard sizes will be helpful for you.

The weight of standard dachshunds is typically between 7 kg to 15 kg. Meanwhile, a mini dachshund normally weighs less than 5 kg.

Standard dachshunds are also taller since they can grow up to 8-9 inches in height. Mini dachshunds, on the other hand, can only reach up to 5-7 inches tall.

There is a third kind of dachshund called the teacup, and it is smaller than the regular mini ones. Their height is less than 5 inches and they only weigh about 3.6 kg.

Dachshunds can only reach their maximum size and height when they are 1 year old, so to estimate a puppy’s future size, you should look at its parents or grandparents.

Both standard and mini dachshunds come in different types of coats, and we listed the famous ones here.

These types of dachshunds are famous for their rich and glossy coat since their coats are nice to stroke and touch.

This dachshund variety features a coat that is sleek, slightly wavy, and flowy. The fur appears longer on their ears, chest, under the body, and neck, as well as behind their legs.

Compared to the first two dachshund types, the wire-haired ones have expressive facial features, scruffy beards, and thick bushy eyebrows. Their coat is waterproof and pleasingly rough to stroke.

Both standard and mini dachshunds also come in various beautiful colors, most of which are listed below.

Aside from their interesting coat colors, it’s not unusual for our dachshund friends to also have a variety of coat patterns. Here’s the list of those beautiful coat patterns.

Just like other dogs, dachshunds also require the right amount of exercise for them to stay healthy and happy.

Dachshunds would love to take part in activities such as field trials, agility, hiking, and swimming.

However, due to their size differences, the activity levels of standard and mini dachshunds also differ.

Standard dachshunds can enjoy longer and faster walks as compared to the mini ones. However, when they get tired, mini dachshunds are easier to carry since they’re lighter.

Standard and mini dachshunds both can walk twice a day for about  30 to 45 minutes.

While both types of dachshunds can walk for the same duration, there’s a considerable difference in the distance they can attain per day.

While standard dachshunds can walk up to 3 to 5 km per day, the mini ones can only walk for 2 to 3 km per day.

Dachshunds are intelligent dogs but they are hard to train because they are stubborn and independent. They normally do things that they want instead of following orders.

They are also sensitive dogs so harsh training will not be effective for them. Instead, positive reinforcement should be used.

You should train them while they are still young. However, it’s hard to potty-train dachshund puppies because they have small bladder capacities.

Crate training should be used for this problem. You should also allow your dog to relieve itself after every sleep, play, meal, and training session.

Healthy standard and mini dachshunds can live for about 12-16 years. For them to live long, dachshunds should be given appropriate food, exercise, love, and care.

However, due to their physical appearance, they are prone to many health problems. Their short legs cannot support their long spine, and this is bad for their body.

But, here’s a more thorough take on the different health issues that both the standard and mini-dachshunds can have.

This condition affects the dachshunds’ skin by making it thicker and darker. This disease is very common in short-haired ones.

The clinical signs that a dog has this disease is when it has rougher areas and bald patches on its skin. There should also be areas with light brown to black in color.

Acanthosis Nigricans greatly affects the groin and legs of the dog.

There are many eye diseases that a dachshund may have, which includes: cataract, dry eye syndrome, and glaucoma.

A dachshund may also have Progressive Retinal Atrophy (PRA) which can eventually cause blindness.

This disease happens when the disc material goes beyond the spinal column. It can cause nerve damage, pain, and paralysis.

Studies in 2015 pointed out that standard smooth dachshunds were over 3 times more prone to IVDD as compared to standard wire-haired dachshunds.

This disease falls under late-onset progressive epilepsy and is due to gene mutation. Lafora disease may cause a dog to have dementia, seizures, paralysis, and death.

Mini wire-haired dachshunds have the highest risk of having this condition.

Which type of dachshund is the most popular?

Mini dachshunds are more popular than standard ones because there is high demand for small designer dogs. The short-haired coat is the most popular in terms of dachshund’s various coats.

Which is more expensive between standard and mini dachshunds?

Standard and mini dachshunds have their own pros and cons, so it’s better to think carefully before getting one.

However, no matter what similarities or differences they have, they are still both great to have and they will surely make your lives more cheerful. 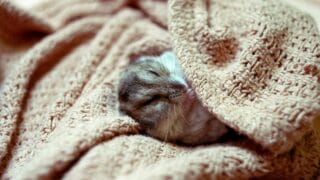 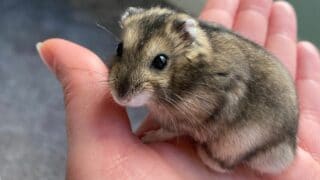 Next
How to Tell Your Hamster Likes You — 7 Signs of Affection!